The 1935 Wheat Penny is an iconic iteration of the Lincoln Penny that makes a great starting place for budding collectors of US coinage.

The 1935 Lincoln penny’s obverse features a layout that is very similar to that of the current penny.

The image of President Abraham Lincoln is in the middle, surrounded by the words “Liberty” and the year of minting 1935, as well as two inscriptions. An elevated plaque that reads “In God We Trust” arches above.

The United States of America and “One Cent,” designating the face value, are written in two inscriptions on the reverse side’s middle portion.

There are solitary wheat stalks on either side of the main lettering. The nickname “Wheat Penny” for the coin comes from these wheat stalks. The Latin words “E Pluribus Unum” can then be seen arching above.

Based on the Victor Brenner design, the US Mint began making Lincoln pennies (also known as Wheat pennies or Wheaties) in 1909.

Theodore Roosevelt, who was president at the time, wanted to create a stunning coin to mark the 100th anniversary of Abraham Lincoln’s birth.

With an unemployment rate of more than 20%, the Great Depression was still going strong in the United States in 1935.

As Germany began to rearm and enacted the Nuremberg Laws, which denied Jews civil rights, the Second World War was rapidly approaching. The Boulder (Hoover) Dam was also built this year.

The China Clipper delivers the first piece of airmail across the region, bringing people closer together for the first time in history. Famous US aviator Amelia Earhart was the first woman to fly alone across the Pacific Ocean.

While the Wheat Penny doesn’t have a lot of metal value as it is comprised of mostly copper, the value of this coin largely comes from its rarity. 1935 is nearly 90 years ago, so as you’d imagine, coins from this era in uncirculated or higher quality condition are pretty scarce.

While not the rarest coin out there, a mint-quality Wheat Penny could certainly be considered the jewel in many collectors’ proverbial crowns. Other factors that can influence the rarity of a 1935 Wheat Penny include its patina and any errors present in the coin.

1935 Wheat Penny With No Mint Mark 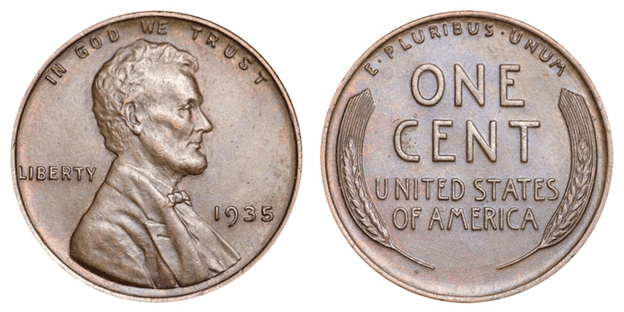 While you may think that a coin without a mint mark is exceptionally rare, it actually denotes one of the most common places that a coin can be struck; Philadelphia. If you didn’t already know, the mint mark is used to indicate where the coin was struck, such as ‘D’ for Denver.

The only exception to this rule is the mint at Philadelphia who’ve never placed a mint mark on the coins they’ve struck. 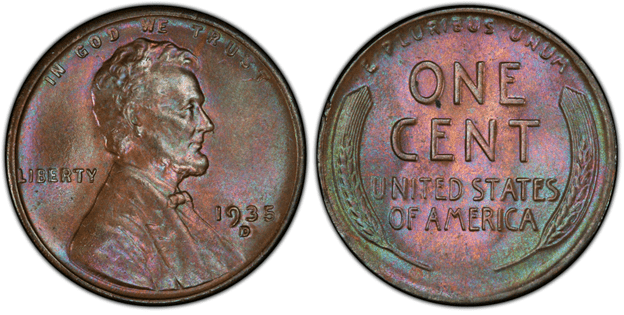 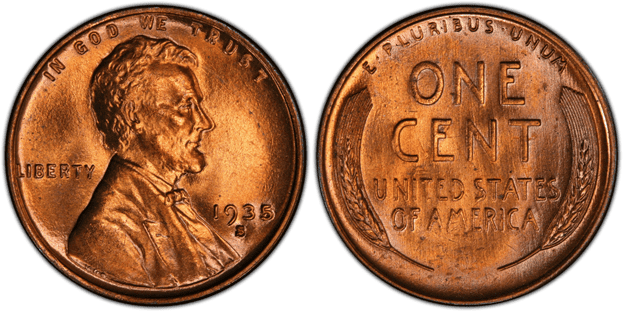 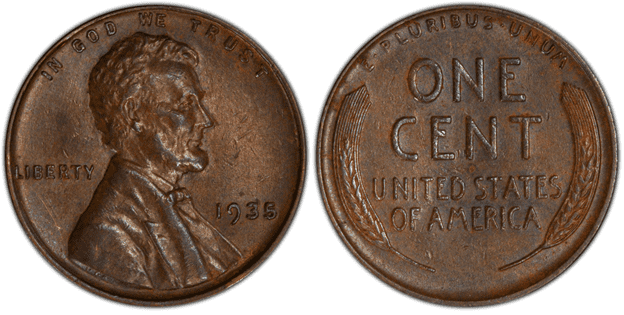 When the hub stamps a design on the die (the device that stamps blank coins or planchets), it does so at two slightly different and separate angles, which is a sort of mistake known as a doubled die.

Each of the three 1935 cent series has a few documented instances with ascribed doubled dies:

Coins with double die errors can cost anywhere from $50 to $100 or more. 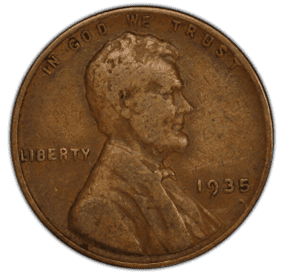 Die breaks happen when the coin die develops minor cracks that can range in size from being extremely small to covering the full coin’s face. In general, the coin is worth more the more dramatic the die break.

Die cracks often only affect one side of the coin and appear as elevated, straight or wavy lines.

Die breaks can happen on any sort of coin, but the so-called “BIE” defect that appears on Lincoln cents is a really uncommon variation. Between the “B” and “E” of “LIBERTY” on the obverse, there is a tiny vertical die fracture that resembles a capital “I” in BIE mistakes.

BIE faults come in various forms and sizes, and most have a value of $5 to $15. 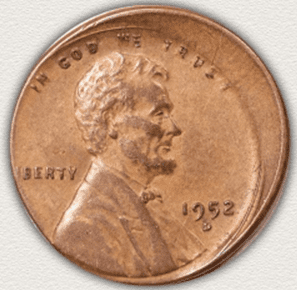 When the planchet is not properly centered on the striking press or the die is not properly aligned, off-center mistakes happen. These faults can range in severity from minor to severe to anywhere in between. 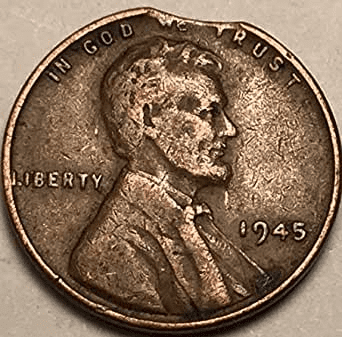 The planchet itself may get accidentally damaged if the planchet-cutting machine makes a mistake when cutting a blank. As a result, the coin may have a cut into the side that is roughly straight or curved as seen in the above 1945 example.

Depending on the amount and severity of the clip, values for clipped planchet faults might vary, but the majority are worth $10 and higher. 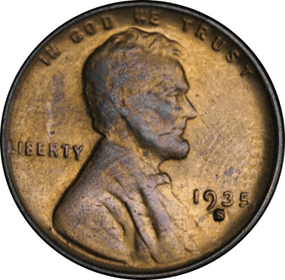 Mintmarks were hand-punched onto each active die on coins produced before the 1990s. There were occasional errors made with this technique because those mintmarks were manually punched onto the dies.

Repunched mintmarks are among the most common variants of Lincoln penny errors, and their values typically range from $3 to $10, depending on how rare or collectable a given repunched mintmark variety is.

Not quite an error, but a unique factor of Lincoln Pennies with a high copper content is the patina or ‘tone’ they develop as they age.

Numismatics split these patinas into three categories with exceptional examples of some being worth far more than others.

The ‘BN’, or brown patina, is the most prevalent of the three; it has the appearance of being the oldest and is the color that copper coins normally take on over time.

In some specimens with this patina that have not been cycled very often, greenish or bluish hues, which are typical in this metal, can be seen, making it even more unique.

As you can see in the exceptional example below these color shifts can be pretty dynamic. 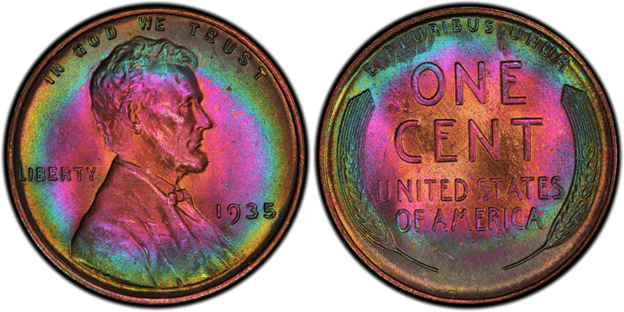 The abbreviation “RB” stands for Red and Brown, indicating that the specimen is brown with the reddish tones typical of a freshly minted copper coin, similar to the patina that came before it.

Whether an RB has been infrequently circulated yet preserved in a humid environment, it is the consequence of superior environmental conservation, or at the very least less exposure to humidity and oxygen than the preceding one. Due to its rarity, it is, therefore, a little more expensive than the previous one. 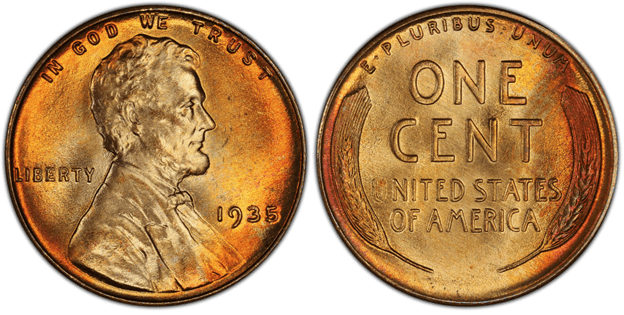 The red patina that copper coins get when they are originally struck is known as the “RD” patina; it is rare since it is difficult to preserve a coin with that tone for such a long time.

Collectors highly value this patina because it is the most expensive of the three. The most distinctive patinas are prioritized with coins this common, therefore a BN or RB may be depreciated, whereas an RD raises the coin’s value due to its rarity among common coins.

To maintain the original patina of a penny, it is essential to keep them in a stable and controlled atmosphere. 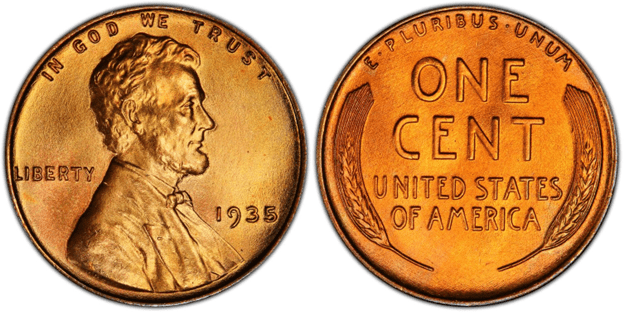 How Much Is A 1935 Lincoln Wheat Penny Worth Today?

Due to its lack of precious metals, the 1935 Wheat Penny only has a melt value of $0.023. This is still double the face value of the coin, but an extra cent really isn’t worth much compared to its numismatic value.

The table below was curated by Coin Study and shows the average value for 1935 Wheat Pennies, though, of course, this chart doesn’t account for elements such as errors and patina previously discussed.

Where To Buy Or Sell 1935 Wheat Pennies?

As you can see by the mint numbers of this coin, the 1935 Wheat Penny is a fairly common coin and some lucky, keen-eyed individuals may even find one in their pocket change, as this is still technically legal tender.

As we mentioned at the start of this article, the 1935 Wheat Penny makes a great place for a budding collector to start, and therefore, the best option for buying and selling this coin is via online marketplaces like eBay and Etsy.

It’s even possible to find some pretty cool error examples of these coins on the aforementioned sites for not too much money.

Of course, any potentially rare examples of the 1935 Wheat Penny should be sold through specialist dealers after grading by a service such as PGCS.

If you’re unsure about the coin in your possession, there are lots of great coin-collecting forums which can help give you more information about what you’re looking at.

The mint mark on a 1935 Wheat Penny is found just below the date on the obverse side of the coin.

Are pennies without a mint mark valuable?

In US coins the lack of mint mark doesn’t indicate anything special and simply denotes that the coin was minted in Philadelphia. Coins struck here have never possessed a mint mark unlike coins struck in Denver which have a ‘D’ or San Francisco which has an ‘S’.

What year is the wheat penny most valuable?

The 1914 D Wheat Penny, which is regarded as the most expensive of the non-error Wheat Pennies, demands an asking price range from $281 and $4,268.