The $1 bill has an interesting history, despite the fact that some individuals are in favor of getting rid of it. From the “funnybacks” that first appeared in the 1920s to the web-printed notes of the 1990s, the design of the dollar has seen some noteworthy changes over time.

The dominating feature of the Dollar Bill is the first president of the United States George Washington. Unlike more modern notes, the distinctive green color was not utilized in these early modern notes, and instead, the note has a tan hue.

Known as ‘One Dollar Silver Certificates’ the dollar bill represented the value of the silver one-dollar coin, known as the peace dollar, with the added benefit that it was much lighter and easier to carry around, not to mention cheaper to produce.

Although the 1935 one-dollar silver certificates are widespread, there are several seal designs and variants that can be valued.

The red R and red S experimental notes, the brown seal Hawaii notes, and the yellow seal North Africa notes are a few other uncommon variants; but more on this later.

The dollar bill has changed many times over the years and 1935 was no exception. Henry A. Wallace, Franklin D. Roosevelt’s agriculture secretary and ultimately vice president, proposed the addition of the Great Seal, with its distinctive pyramid and eagle features, to the $1 bill in 1935.

The nation’s Founding Fathers created the seal. A committee comprised of John Adams, Thomas Jefferson, and Benjamin Franklin was established to create a seal that would represent the aspirations of the new nation before the Continental Congress was dissolved on July 4, 1776.

However, Congress didn’t accept the final design until five years later. Charles Thomson, a prominent Philadelphian businessman and the Continental Congress’s secretary at the time, is credited with creating the seal.

With the exception of the lack of in god we trust, the reverse was also modified to its current layout. The slogan “In God, We Trust” didn’t get added to the back of a dollar bill until 1957.

Since 1963, the dollar bill’s general appearance hasn’t changed much.

In addition to the first technicolor Mickey Mouse short film being made, Amelia Earhart undertakes a solo journey across the Pacific in 1935. Boulder (Hoover) Dam is now complete. The Neutrality Act, which prohibits the sale of military material to adversarial nations, is passed by US President FDR, and the China Clipper carries the first piece of airmail over the Pacific.

What Are 1935 Silver Dollars Worth?

A competition to develop a design that would symbolize peace produced Anthony de Francisci’s Peace silver dollar denomination, which includes the image of Liberty wearing a radiating crown.

A perched bald eagle and the sun’s rays are shown on the back of the 1935 Peace silver dollar. Directly beneath the eagle is the word “PEACE.”

In uncirculated condition, the silver peace dollar can be worth between $60 and $110 dollars.

What Are The Rare Varieties of 1935 Dollar?

Yellow, blue, and brown are the three main hues of seals used in the Dollar Bills printed in 1935 and are marked as A through H. In North Africa, The U.S. military got $1 bills with a yellow seal and darker paper during World War II.

In response to the attack on Pearl Harbor, 1935A Hawaii $1 notes bearing a brown seal and the phrase Hawaii printed on the left side were printed.

The 1935 series is quite prevalent and will only sell for their $1 face value in circulated conditions. Uncirculated value: $12.50 to $17.50. These bills only retail for roughly $3.50 in very good condition. 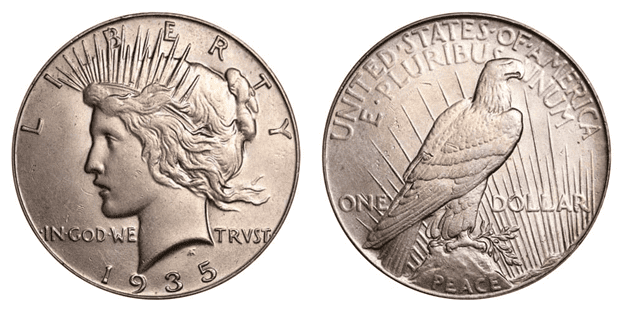 Truthfully, because of their large mintage, 1935 Peace Silver Dollars cannot be considered rare coins, despite the fact that their silver content gives them intrinsic metal value. 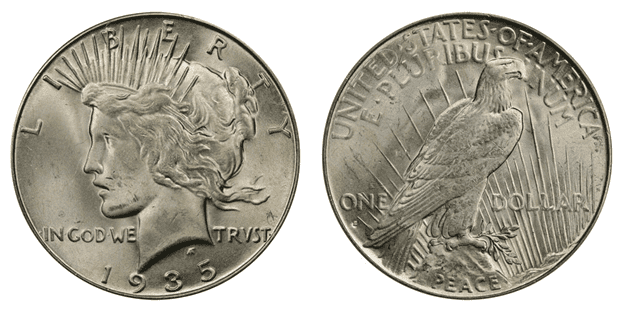 Two reverse variations of the 1935-S were produced, each with three or four sun rays directly below the word “ONE.” Due to their increased scarcity and potential higher demand, four-rayed coins may be more expensive than three-rayed coins. 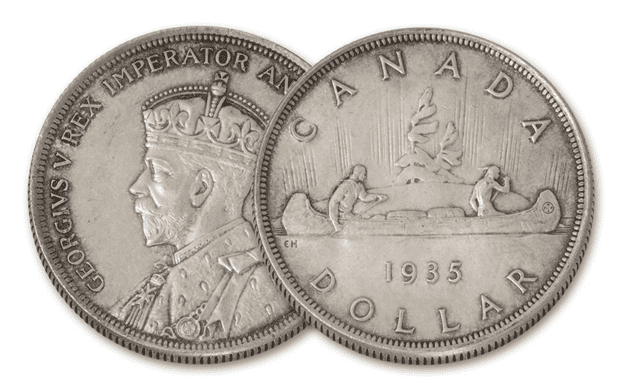 The history of the first silver dollar in circulation in Canada is unmatched in numismatics. King George V’s Silver Jubilee, or his 25th year as king, was commemorated by the commissioning of the Voyageur Dollar, which was first struck in 1935.

In honor of the fur trade, the country’s founding industry, the coin’s name comes from the iconic image of two voyageurs—one a fur merchant and the other a Native Canadian—managing a canoe over open water.

One of the most well-known coin designs ever produced in Canada, the coin’s motif evoked the wide, untamed frontier of the country. Emanuel Hahn, a Canadian sculptor and artist, came up with the design, which endured for more than 50 years.

According to the Bureau of Labor Statistics consumer price index, this indicates that current prices are 21.34 times higher than average prices since 1935. Only 4.686 per cent of everything a dollar could buy then is still available today.

You could get a lot more for your money in 1930. For instance, the cost of a five-pound bag of sugar has decreased to just 25 cents.

Four bags of sugar for $1 could have made a lot of cookies, cakes, candies, and other delightful treats for our 1930s shopper.

In addition to the sugar, the following things are also available for one dollar:

How To Calculate Inflation Rate Of Dollar (Since 1935)?

Inflation Graph or Timeline in the U.S. for $1 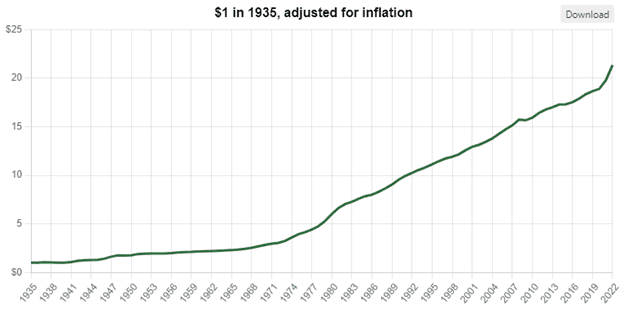 Inflation graphs are a great way to visualize the inflation rate of the dollar from 1935 to the present. As you can see by the above graph, inflation was relatively slow and steady between 1935 and 1968, before starting to increase more rapidly from 1971-77 and spiking between 1977 and 1980.

Things then from a more consistent yet accelerate increase until we reach 2019-2022 when inflation spikes once again.

‘CPI’ refers to ‘consumer price index’. The Consumer Price Index (CPI) tracks changes in consumer spending on a representative basket of goods and services across time.

Business owners can use CPI figures to set prices for their products while considering what consumers would pay given the state of the economy and what rivals are charging for similar things.

Analysts can spot periods of inflation and deflation by using the CPI calculation.

The consumer price index formula is:

Additionally, the accumulated principal value is used to calculate interest for the subsequent time period.

The new way of calculating interest now utilized in all international financial and commercial operations is known as compound interest. When we look at the compound interest values that have built over successive time periods, the power of compounding is clearly apparent.

Following the computation of the total amount over a period of time using the initial principal and the interest rate, the compound interest is determined.

The formula for calculating the amount is given below for an initial principal of P, an annual interest rate of r, a time period of t in years, and a frequency of n times the interest is compounded annually.

When it comes to buying and selling 1935 Dollars, your options vary depending on whether you’re looking to buy or sell a Dollar Coin or a Dollar Bill, as despite both being currency are viewed very differently by the numismatic society.

Due to their silver content 1935 Peace Dollars, carry intrinsic metal value despite any issues with condition, and could be bought and sold by a silver dealer or pawn broker.

[H3] What does a blue seal on a dollar bill mean?

Yellow, blue, and brown are the three main hues of seals used in the Dollar Bills printed in 1935, of these hues, blue is the most common example.

[H3] What does “silver certificate’ mean on a dollar bill?

Legal tender in the form of paper money is referred to as a “Silver Certificate.” The certificate can now be exchanged for its face value instead of its original redemption value of silver, but the term still stays present on dollar bills as a nod to its history.

[H3] What year silver dollar is worth the most?

The first silver dollar ever minted by the United States is thought to be a 1794 Flowing Hair, which is considered to be the “holy grail” of all silver dollars. In 2013, numismatist and coin dealer Bruce Morelan paid $10 million for this absurdly rare coin.

8 Rarest Muscle Cars Ever Made

8 Most Expensive Car Seats Currently on the Market