Over the past decade, sneaker collecting has exploded in popularity. This has driven up the price of sneakers on the resale market and spawned a scalper problem. Often, shoes on the secondary market sell for double, triple, and even quadruple their original price. This has turned collecting sneakers into a status symbol and something that is unattainable for the average person.

The following list features some of the most expensive sneakers ever sold. All of these sneakers were either sold at auction or in private sales handled by some of the major auction houses like Sotheby’s and Christie’s. Interestingly, a majority of the most expensive sneakers were shoes worn by Michael Jordan during pivotal moments of his career. The other sneakers on this list were limited edition or one-of-a-kind pieces.

As of November 2021, the information on this list is as accurate as possible and will be updated as needed. 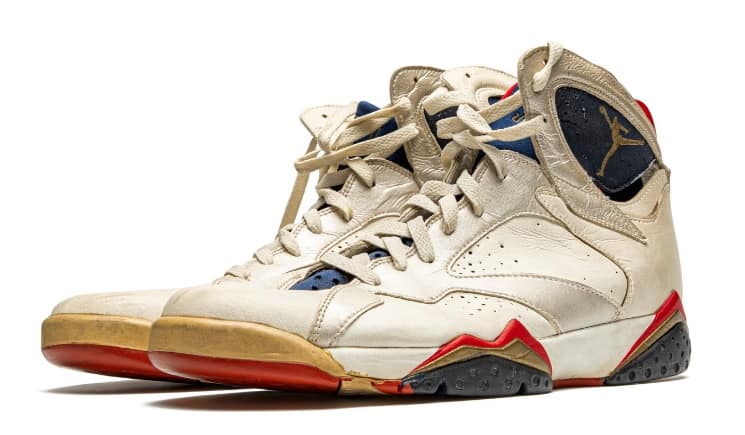 
The 1992 Olympics was a banner year of basketball and the team was dubbed the “Olympic Dream Team.” Of course, the legendary Michael Jordan was part of the team. Jordan wore a custom pair of Nike Air Jordan 7s, which were auctioned off by Christie’s in 2020 for $112,500. This was more than double what the auction house had estimated.

This colorway of the Jordan 7 was specifically designed for Jordan to wear in the Olympics, with his Team USA number “9” on the back of each shoe, differing from the “23” on other colorways of the Jordan 7.

According to Christie’s Michael Jordan wore these shoes during the August 8, 1992 gold medal game against Croatia, in which Jordan scored 22 points and Team USA won by a score of 117-85. 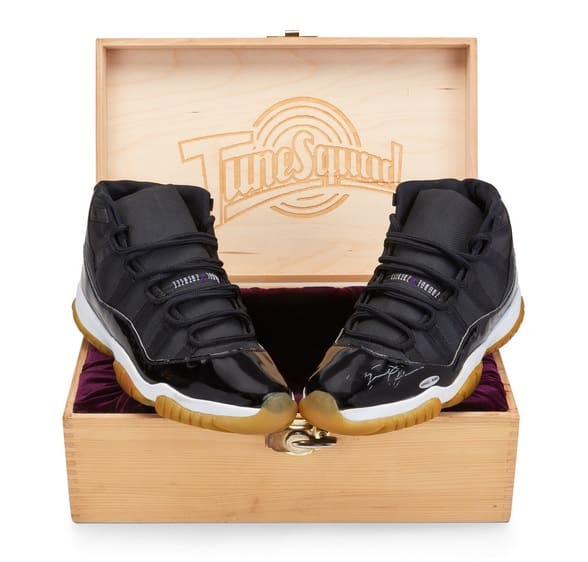 Although there’s a new Space Jam move starring current basketball superstar LeBron James, the original Space Jam movie from 1996 is an enduring favorite among millennials. The movie’s popularity  along with Michael Jordan’s status as a sports legend were cemented by the sale of Air Jordan 11s that were specially made for Michael Jordan for the movie. The Space Jam Sample shoes were sold by Sotheby’s in partnership with Project Blitz for an “MJ’s Secret Stuff” auction.

These shoes were never worn by Jordan, but they were kept in pristine condition, stored in a velvet-lined custom wooden box showcasing a laser-etched graphic of the ‘Tune Squad’ logo on the inside of the lid and Space Jam on the outside. The shoes also feature Jordan’s signature.

According to Sotheby’s the Space Jam Air Jordans are some of the rarest Air Jordans ever as only a handful of pairs of the shoes exist in private collections. 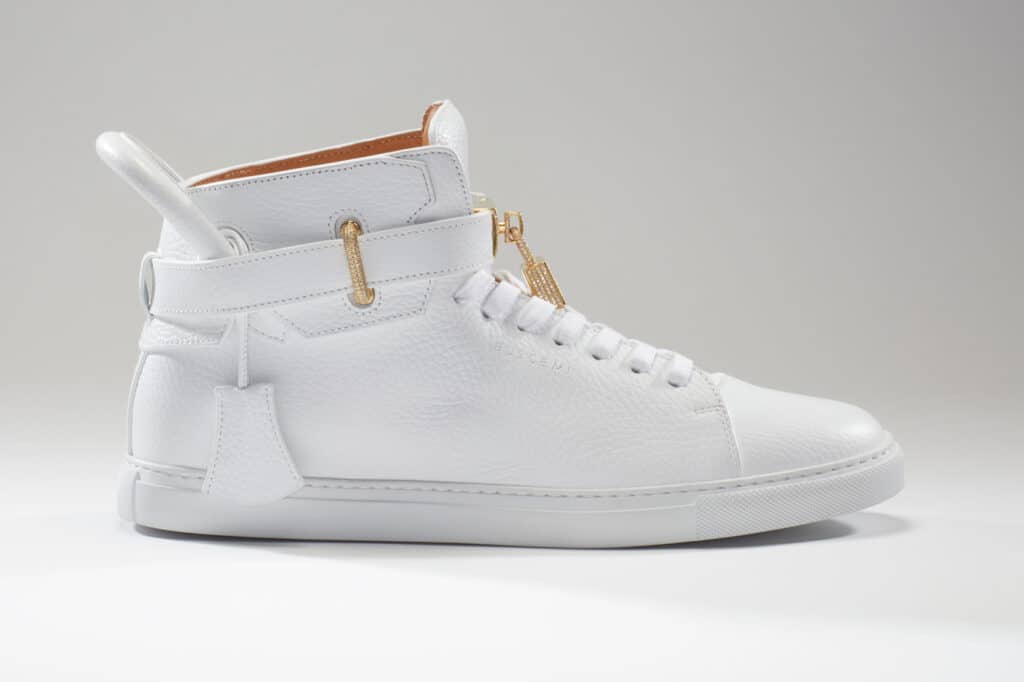 The BUSCEMI 100mm Diamond shoes are currently the most expensive sneakers on the market, with a price tag of $132,000. The shoes are a limited edition of BUSCEMI’s popular 100mm sneakers. This model features 11.50 carats worth of diamonds (from jeweler Shayan), as well as the signature 18-karat gold hardware. Adding to the shoes’ exclusivity is the fact that you can only get them at BUSCEMI’s flagship store in Manhattan.

It takes more than 20 hours of hand work to produce one pair of BUSCEMI 100mm Diamond sneakers. 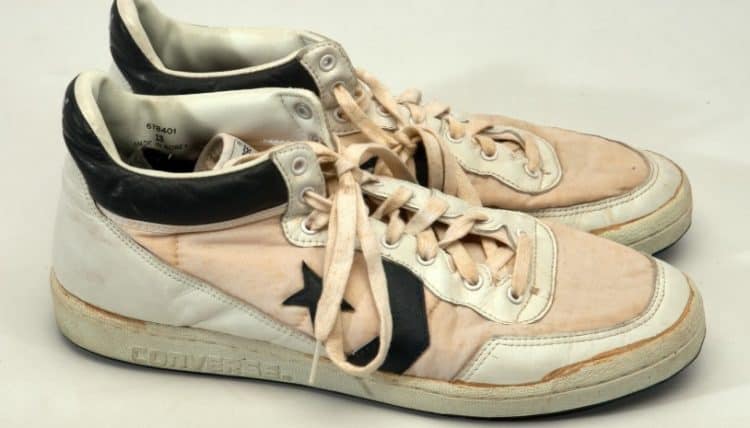 While these might not be the most expensive sneakers ever, the Michael Jordan Game Worn Converse are the most expensive pair of Converse shoes ever sold at $190,373. These shoes were worn by Jordan during the 1984 Olympic Gold Medal game. Although they’re an important part of sports history, these Converse shoes are quite worn out and not in good condition. Jordan wore them during his college career.

Michael Jordan gave these iconic Converse shoes to the son of Los Angeles Lakers legend Gil Goodrich, who was 11 at the time. He treasured the sneakers until he decided to sell them. 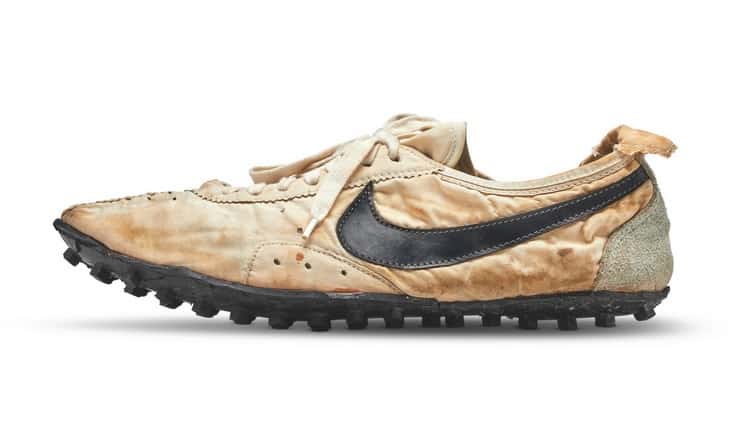 Before several pairs of sneakers were sold more recently for millions of dollars, this rare pair of Nike Waffle Racing Flats was sold for $437,500, a record high for a pair of sneakers at the time. The waffle-soled running shoes were designed by Nike co-founder Bill Bowerman for the 1972 Olympic Trials. They’re one of 12 pairs ever made and the only known unworn set. The shoes were purchased by collector Miles Nadal, who plans to display the “Moon Shoes” at his private museum in Toronto. The starting price for the Waffle Racing Flats was only $80,000.

Bill Bowerman was inspired to create the waffle sole traction pattern for Nike’s early running shoes by experimenting with his wife’s waffle iron. The rubber on the soles of the Waffle Racing Flats were literally poured into a modified waffle iron. 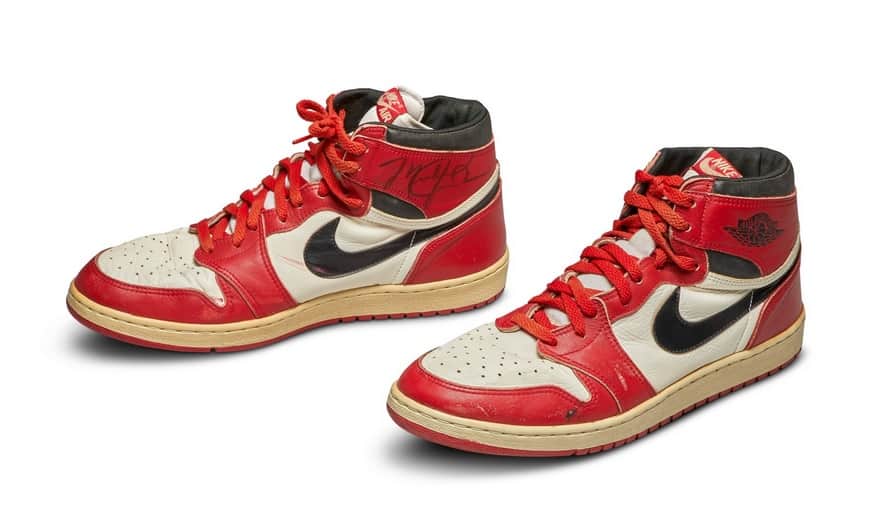 In 2020, Sotheby’s sold an autographed pair of Nike Air Jordan 1s worn by Michael Jordan in 1985 for $560,000. The auction was held online in May 2020 and ten bidders from around the globe tried to outbid each other to land Jordan’s sneakers. According to Sotheby’s description of the sneakers, the shoes were made exclusively for Jordan and featured red laces instead of black and white. Jordan signed the right sneaker.

Unlike the sneakers that Jordan wore later in his career – he wore a new pair for every game – these Nike Air Jordan 1s are worn in. Additionally, the shoes are different sizes because Jordan wore a size 13 on his left foot and a 13.5 on his right.

These Nike Air Jordan 1s worn by Michael Jordan were a little different than the first line of Nike Air Jordan released to the public. They are mid-tops, which Nike did not produce for the public at the time and the swooshes are longer, leaner, and more aggressive. 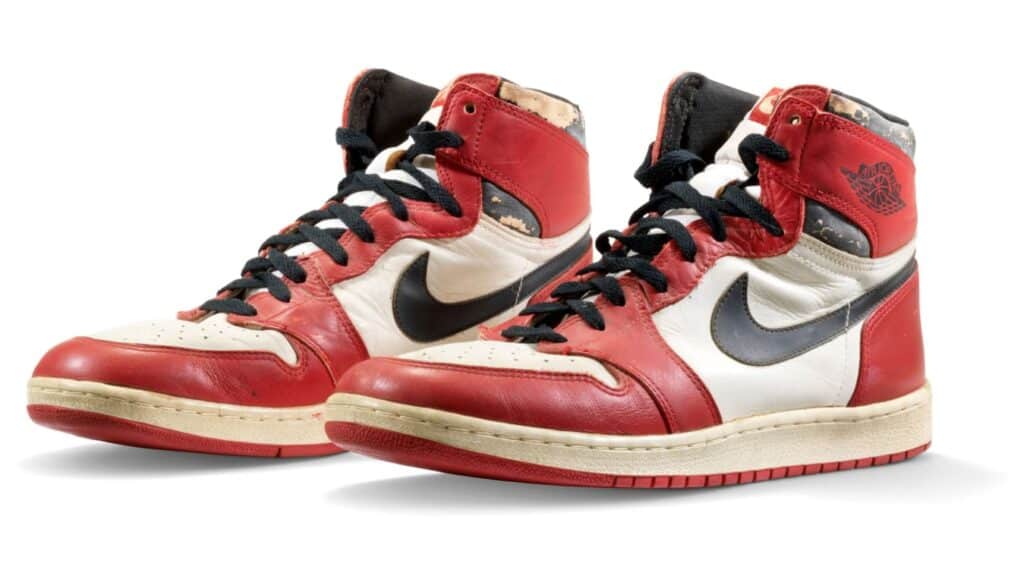 The next pair of shoes on this list are part of sports history as they were the shoes Michael Jordan wore in 1985 during the Nike exhibition game where he dunked so hard the glass backboard shattered. The Nike Air Jordan 1 High shoes worn by Jordan were sold by Christie’s in 2020 for $615,000, which at the time was the most ever paid for a pair of sneakers. The shoes were signed by Jordan, adding to their value.

The sole of the left shoe of the Nike Air Jordan 1 High shoes worn by Michael Jordan contains a shard of glass from the backboard that Jordan shattered. 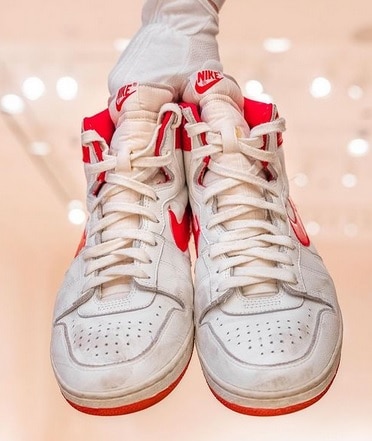 As one of the most legendary athletes across any sport, Michael Jordan memorabilia often fetches top dollar, particularly any sneakers that he personally wore. While several pairs of Jordan’s sneakers have been sold for tens of thousands of dollars, a pair of Nikes that he wore during his rookie season with the Chicago Bulls shattered all of his previous sneaker records. In October 2021, Sotheby’s auctioned off a pair of Nike Air Ships that Jordan wore during his 5th NBA game on November 1, 1984, for nearly $1.5 million.

Michael Jordan’s Game Worn and Autographed Nikes from 1984 were given to the Denver Nuggets ball boy, Tommie Tim III Lewis, after the game. Lewis kept the shoes in excellent condition, which probably helped increase the price paid for them. 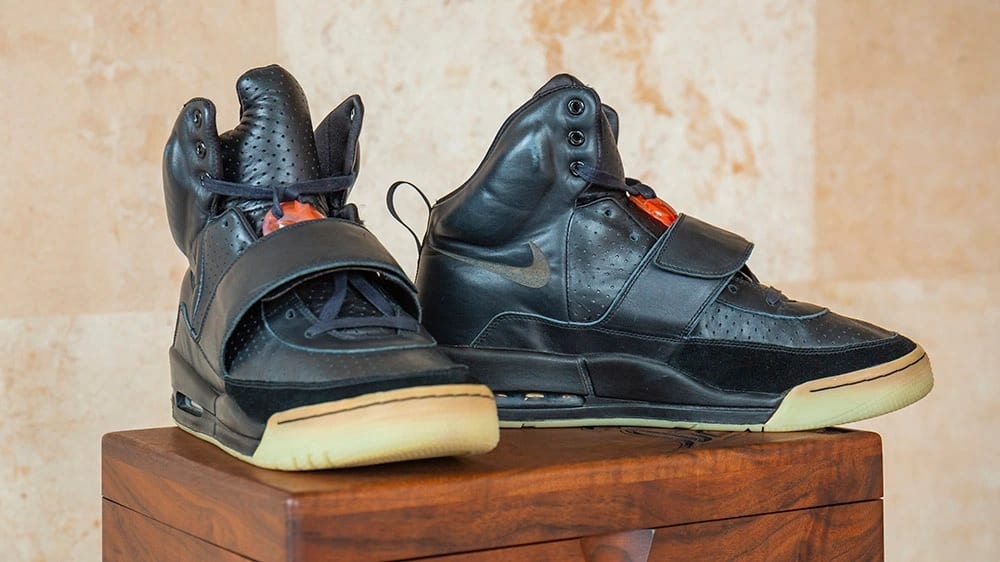 In April 2021, the very first pair of Yeezy sneaker prototypes worn by Kanye West at the 2008 Grammy’s broke a world record when they were sold for $1.8 million in a private sale. The sale was hosted by Sotheby’s and the Nike Air Yeezy 1 prototypes were purchased by sneaker investing platform, RARES. According to sneakerheads, the shoes are so iconic because they paved the way for Kanye West to launch his Yeezy shoe and clothing line.

RARES allows users to purchase and trade shares in individual pairs of sneakers and shares for the Nike Air Yeezy 1 prototypes were opened to the public in June.

Following the release of the Nike Air Yeezy 1 in 2009, Kanye West collaborated a few more times with Nike before parting ways with the brand in 2013. West switched his Yeezy partnership over to Adidas. 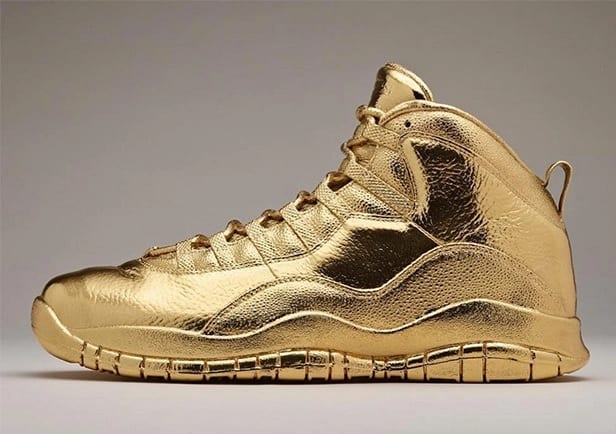 In 2016, rapper Drake revealed that he scored a custom pair of Solid Gold OVO x Air Jordans, valued at $2 million, making them the most expensive sneakers ever in the world. The one-of-a-kind shoes were created by mixed media and conceptual artist Matt Senna. While the shoes are not technically wearable because they’re made from solid 24 karat gold, they are an exact replica of the OVO x Air Jordan 10s (which go for over $600 on the resale market).

According to Drake, the Solid Gold OVO x Air Jordans weigh over 100 pounds.