10 Most Expensive and Rarest Converse Shoes Ever

Converse was founded in 1908 and has been one of the most popular shoe brands for over 113 years. The brand is constantly coming out with limited edition collaborations and collections, which can make collecting these iconic shoes difficult. Surprisingly, these special Converse shoes aren’t quite as expensive as other brands on the secondary market. 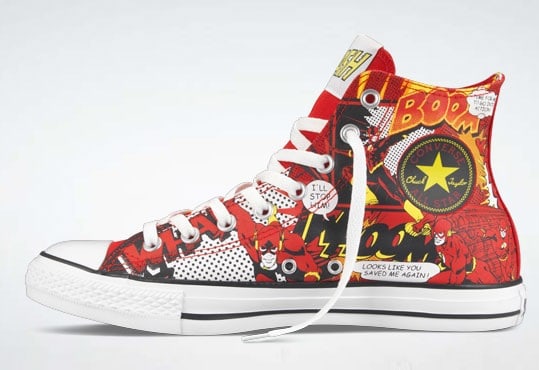 To celebrate the 75th anniversary of DC Comics, Converse released its first collection of DC Comics shoes in 2011. The Converse DC Comics collection featured images of DC’s most iconic heroes and villains on Chuck Taylor All Stars. This first collection included Superman, Batman, Wonder Woman, the Penguin, the Joker, and others. These Converse DC Comics shoes were incredibly popular, and Converse has released more collections over the years.
Price Paid or Current Estimated Value: $50 to $250 on resale sites
Year Released: 2013 and 2014
Style: Chuck Taylor All Stars 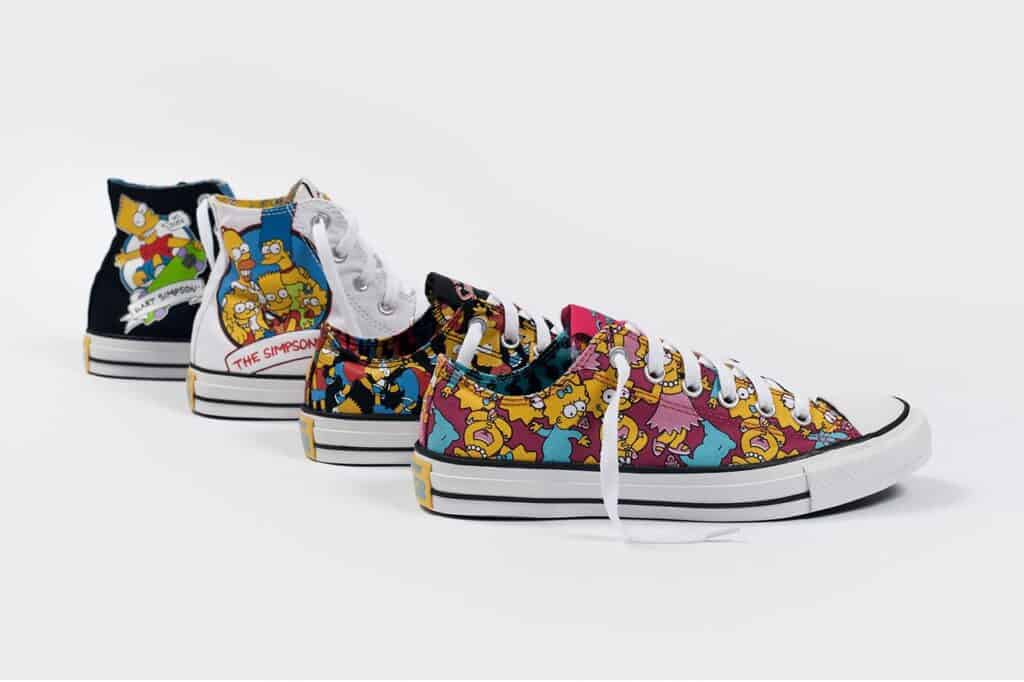 Although the show isn’t what it used to be, The Simpsons are still some of the best-known cartoon characters in pop culture. In 2013, when the show was in its 25th season, Converse released a limited collection of shoes themed after The Simpsons. The collection featured the show’s namesake family – Homer, Marge, Lisa, Bart, and Maggie –  on Chuck Taylor All Stars. Some of the shoes also had some of Homer’s signature quotes like “D’oh!” A second Converse x The Simpsons collection was dropped in 2014. The Simpsons Converse are some of the most popular and pop up every once in a while on resale sites. 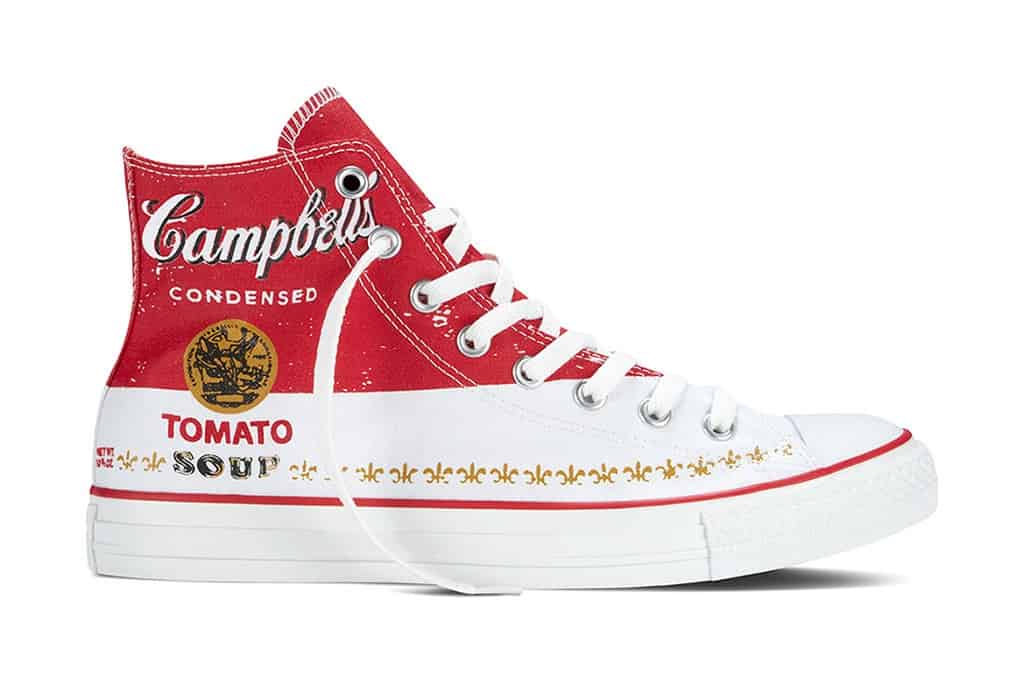 Between 2015 and 2016, Converse released a few collections featuring the iconic artwork of Andy Warhol. Converse partnered with the Andy Warhol Foundation for all of the collections. The first collection featured Warhol’s signature Campbell’s Soup cans, advertisements, and newspaper clippings graphics. The followup collection in 2016 had Andy Warhol cow wallpaper and flowers prints. Of course, the Andy Warhol Converse shoes quickly sold out and are now only available on resale sites.

According to several sources, Andy Warhol used to silkscreen designs onto his own Converse Chuck Taylors back in the 1980s. 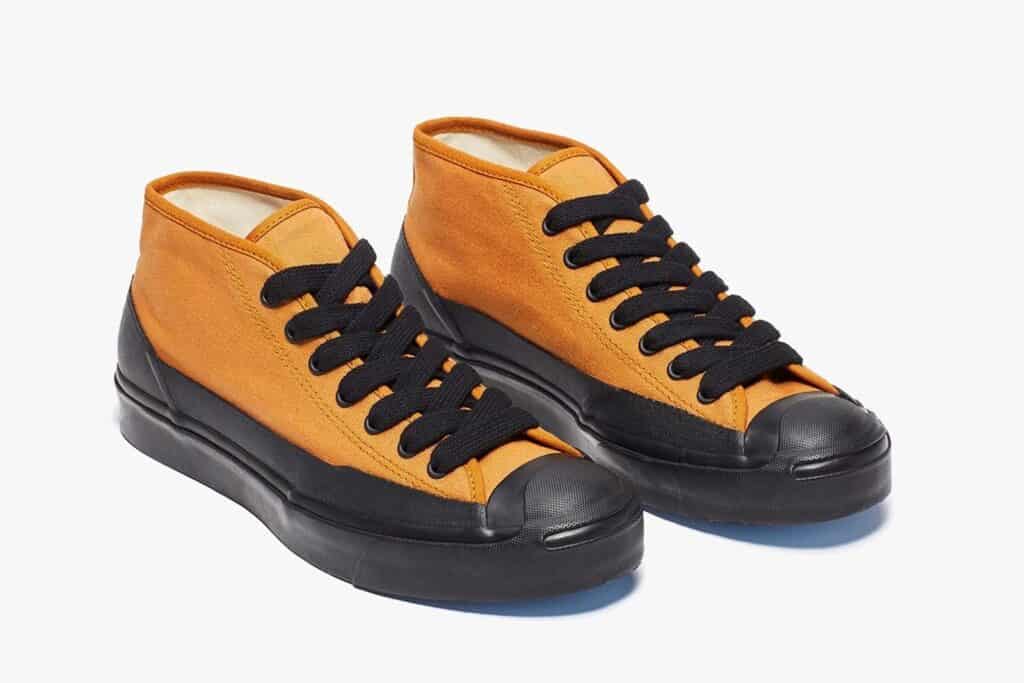 In 2019, rapper A$AP Nast dropped a highly anticipated Converse collaboration that featured apparel as well as shoes. The A$AP Nast Converse collection included sweatpants, t-shirts, and sweatshirts. The colors that Converse and A$AP Nast chose for the shoes and clothing were Vintage Heather Grey, Brown, Lemonade, Beechnut, and other earthy tones. The most wanted piece from the collection was the the orange Jack Purcell sneakers. A green version of the shoes was also available.

Converse has collaborated with the A$AP Mob a few times because the group’s members, including A$AP Nast, have been lifelong fans of the brand and their shoes. 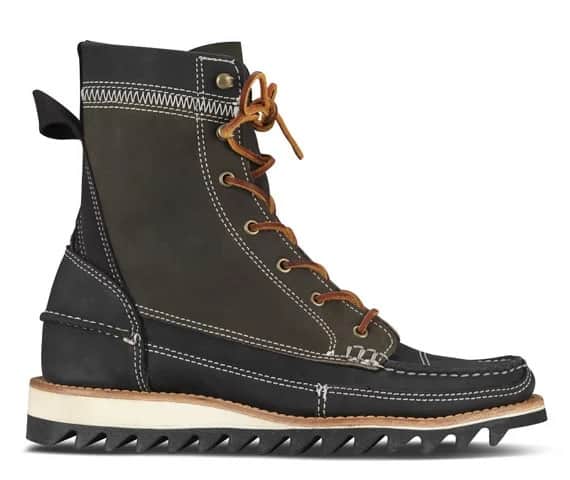 While Converse is mostly known for its hi-top and low-top Chuck Taylors, the brand has produced boots over the years. In 2012, Converse collaborated with New England’s Highland Boot Company of Brewer, Maine to release the Chuck Taylor All Star “Made in Maine” Boot. This was a very limited run, as only 80 boots were made. The Made in Maine Boots retailed for $350 and none were found on resale sites recently. 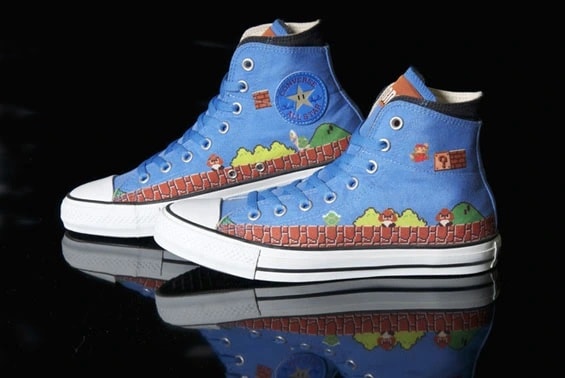 
To celebrate the 25th anniversary of Nintendo’s Super Mario Bros., Converse released a Japan exclusive collaboration. The Super Mario Bros. Converse shoes paid homage to the original game and featured some of the game’s most iconic graphics. The limited edition shoes were only available at select retailers in Japan. These days, the Super Mario Bros. Converse shoes can be found on the secondary market for a few hundred dollars.
Price Paid or Current Estimated Value: $285 to $1,500 on resale sites
Year Released: 2008 and 2010
Style: Chuck Taylor All Star, Jack Purcell, and One Star 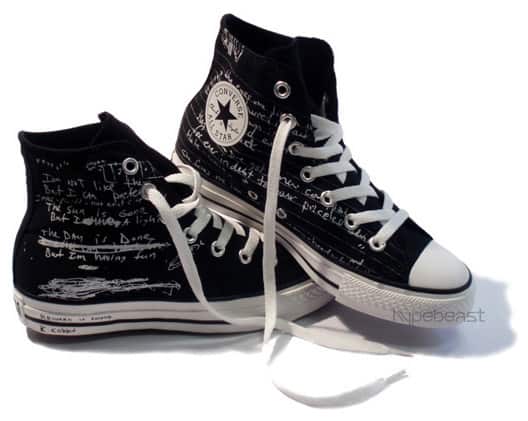 Although he passed away under unfortunate circumstances in the 1990s, Nirvana’s Kurt Cobain has left a lasting impression on many people and is an enduring part of popular culture. In 2008, Converse released a special line of Kurt Cobain Chuck Taylors. The shoes featured drawings and writings that were published in 2002’s Kurt Cobain Journals. Some of the shoes also had images of Cobain. As another nod to Cobain, the shoes used in the Converse collaboration were the styles that Corbain often wore.

To make the Converse Kurt Cobain shoes even more special, the shoes were embroidered with Cobain’s signature. 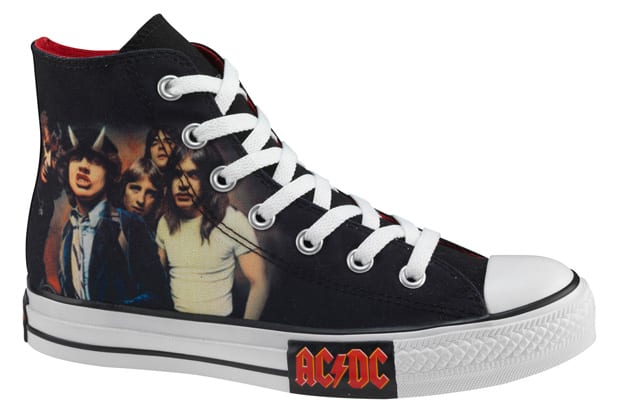 In 2009, Converse dropped a Chuck Taylor All Stars collection featuring Australian rock legends AC/DC. There were a couple of different Chuck Taylors featuring images of AC/DC and their album art. The collaboration paid homage to to the band’s 1978 album ‘Powerage’. Today, these Converse AC/DC shoes typically sell for a few hundred dollars.

The rarest/most unique shoes in the Converse AC/DC collaboration featured  multi-colored laces (made from smaller individual laces which are intertwined), double lining, and the yellow-meets-orange Powerage logo wrapped around the heel. 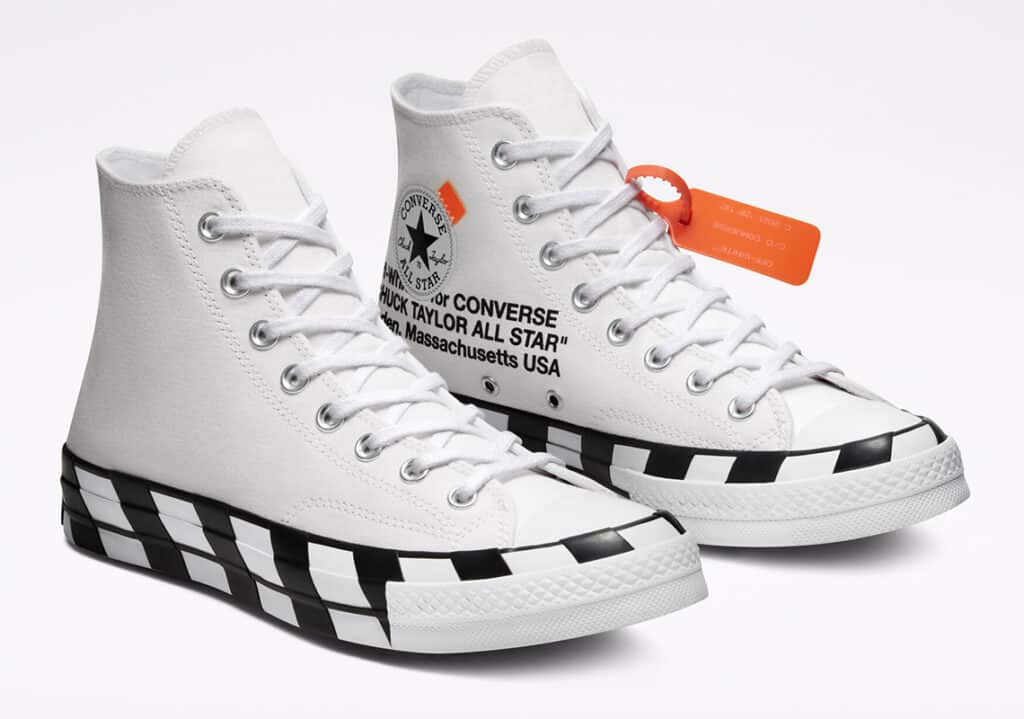 Originally released in 2018, the Converse Off-White Virgil Abloh Collab shoes are highly sought after and sell for thousands of dollars on the resale market. The shoes were designed by Virgil Abloh, the artistic director of Louis Vuitton’s menswear collection, which accounts for their popularity. Due to demand of the Off-White Virgil Abloh Chuck 70s, Converse actually re-released the shoes in April 2021 and they quickly sold out again. 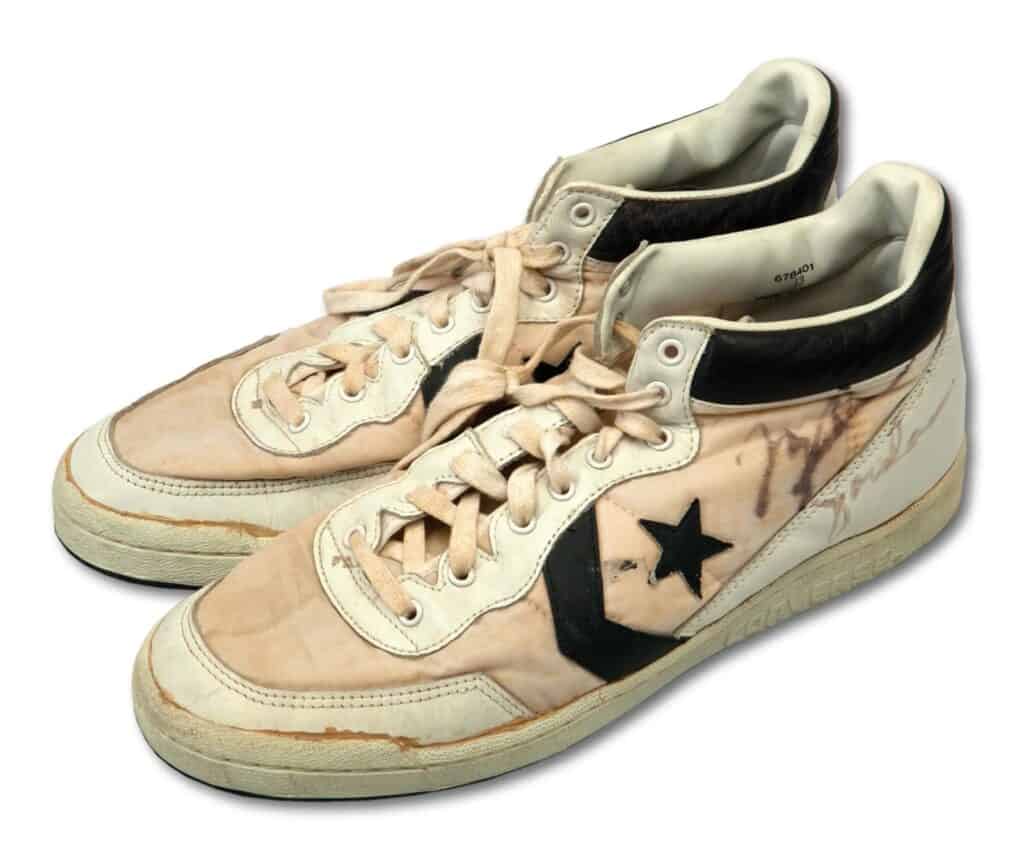 In 2017, Michael Jordan’s Game-Worn Converse were sold at auction for over $190,000, making them the most expensive and rarest Converse in the world. Jordan won the now-iconic shoes during the 1984 Olympic gold medal match. This was Jordan’s first Olympic Gold Medal win. The sale of these Game-Worn Converse shoes are now the most expensive game-worn shoes of any sport. The shoes are Converse Fastbreak Mids, which are now typically worn by skaters.

Before the sale of the Michael Jordan’s Game-Worn Converse in 2017, the previous record holder for most expensive game-worn shoes was another pair worn by Jordan: the actual “Flu Game” Air Jordan 12s worn by Jordan in Game 5 of the 1997 NBA Finals.

8 Most Expensive and Luxurious Bottled Water You Can Buy