Computer mice are usually bought as necessary accessories to personal or office computers. On the higher end, they might be bought for the technology upgrades they can offer to a gamer or digital artist. They aren’t usually made or bought to be luxury items created for show or embedded with diamonds to display the owner’s wealth.

Keep reading to learn about the mice that extend beyond their practical uses. Due to the manufacturing techniques or the materials used, these 8 computer mice are the most expensive in the world.

The first entry on this list is the most expensive mouse available for gamers. The Razer Orochi V2 Wireless Optical Gaming Mouse has an ultra-long battery life and a lightweight construction for ultimate precision while gaming. No matter your grip, the Razer Orochi V2 is ergonomic and responsive to even your fastest, subtlest swipes. With just a single battery in the mouse’s customized hybrid battery slot, this Razer will have you gaming in style for hours.

There’s no point in buying a high-end gaming laptop and then supplementing it with a cheap mouse. Razer offers this mouse for serious gamers for $3,333.00, which is expensive for mice but cheap for this list.

This mouse’s contact points are plated with gold, connects with Bluetooth on 2 wireless modes, and features a 5G advanced 18K DPI optical sensor. 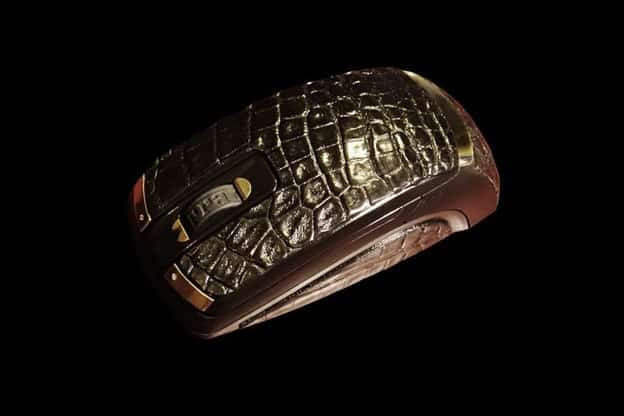 This is a unique one. The Golden Ferrari and Crocodile Skin Mouse, as the name suggests, is made from rigid, finger-pleasing crocodile skin. The smooth scales are emblazoned with gold (18-karat) and sporadic blue diamonds.

The mouse was designed by MJ Art-Studio, a luxury accessory maker that will appear on this list again. It sells for $17,258.

Crocodile skin farming and manufacturing has become more complicated since the 1970s. The trade of the skin has become legally more dubious due to issues in assessing crocodile farms for humane raising and butchering conditions. Additionally, unlicensed commercial hunting has hurt crocodile populations in many places, leading governments to place bans on them.

This mouse uses such a small amount of crocodile skin and is sold in such a limited quantity that it mostly circumvents these restrictions. 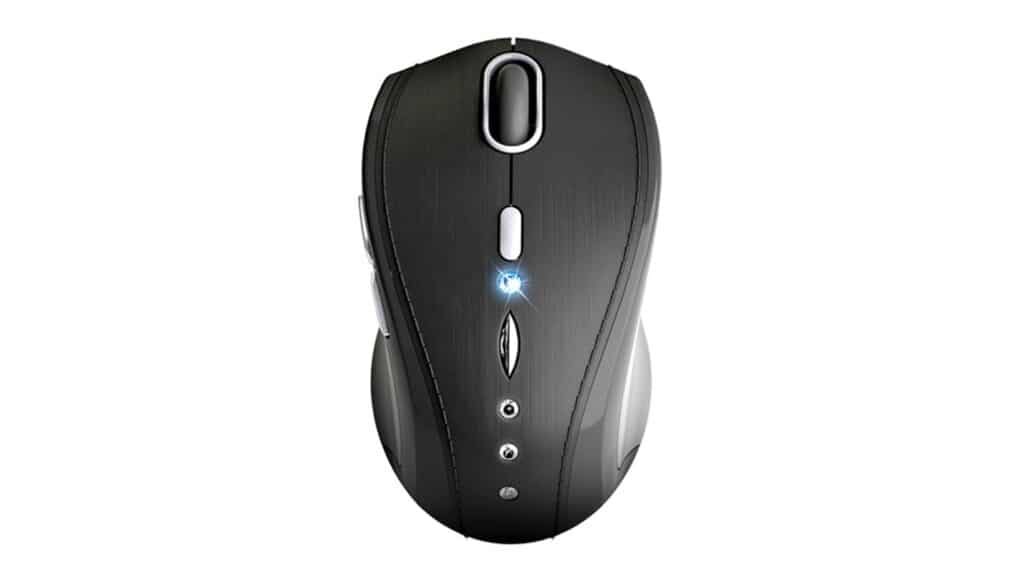 The Bling-Bling Mouse by Gigabyte is crafted from high-quality leather and studded with Swarovski crystal. It is plated on the center and side buttons with 18-karat gold, which accentuates the two-tone stitching that gives the mouse its unique style. For a hyper-expensive computer mouse called the Bling-Bling, Gigabyte made this mouse surprisingly understated.

This wireless mouse attaches to your computer with a nano-receiver. Its DPI is fully adjustable with the push of a button on the mouse itself.

Swarovski crystal was introduced to the jewelry market in 1892 by Daniel Swarovski. Today, the family’s fifth generation descendants continue the tradition of precision-cut crystals that have been featured in Dior, Chanel, D&G, and other luxury lines.

High-quality Swarovski crystal has a rainbow tint that glitters in jewelry, home décor, and more. It’s responsible for the 9-foot star that adorns the top of New York City’s Rockefeller Center Christmas tree (which weighs about 550 pounds, by the way). 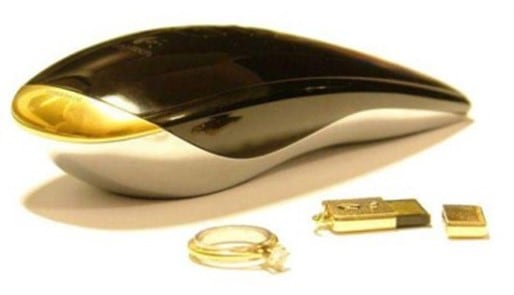 This mouse made by Logitech was 3D-printed, operates on laser technology, and has a case made from solid gold. It has a sleek futuristic design that looks like the high-end version of something someone might use in a Star Trek.

To bump up the price to $24,200, Logitech also included a jewel micro flash drive made of gold and a gold-banded diamond ring.

Logitech began in 1976 in California at Stanford University. It was created by two computer science graduates named Daniel Borel and Pierluigi Zappacosta, later joined by Giacomo Marini. The first office was in Switzerland and their first mouse, the P4, was completed in 1982. 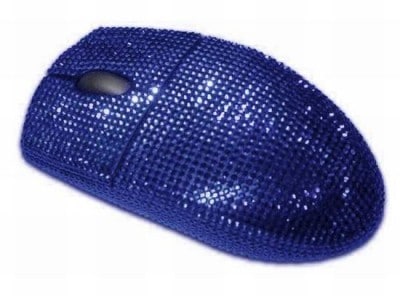 The frame of this mouse by the MJ Art-Studio is made of gold. The case on the outside is embedded with a ton of blue sapphires that make the mouse’s value skyrocket to $28,000. Even the two pushbuttons are encased in blue jewels – only the scroll button has been left sapphire-less out of necessity.

This mouse was manufactured in a limited edition by MJ and shipped in an exclusive box made from black gold, which is a luxury item all on its own.

Blue sapphires are known as one of the world’s most valuable luxury stones and often worn in expensive jewelry. However, the particular properties of this oxide mineral mean that it has uses in internal technology components as well, such as crystals in wristwatches as well as insulating substrates in solid state tech, integrated circuits, and infrared optical technology.

This makes the sapphires on the Blue Sapphire Mouse more than decoration – they also serve as a clever reference to the natural source of some of the device’s most complex technology. 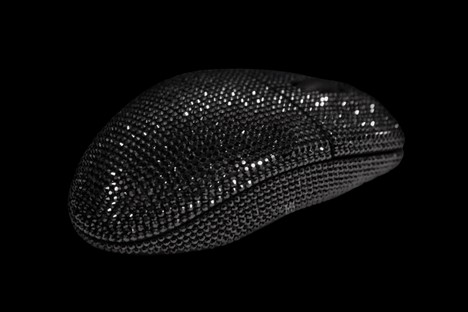 The entire body of the mouse is studded in black diamonds, making it as much a find for jewelry collectors as technology lovers. To own this mouse will cost about $32,000.

When diamonds form in the presence of incredible heat and pressure, they gain what are called “inclusions.” These normally show up as dark flecks in an otherwise clear diamond – normally, the more inclusions a diamond has, the less pure or sparkling it is.

However, diamonds with an overwhelming number of inclusions are valued as black diamonds, where the specks have taken over. They are white diamonds with natural or artificial changes, not technically a colored diamond. Artificial ones aren’t worth much but natural black diamonds, as this mouse can attest, are uniquely expensive in their own right. 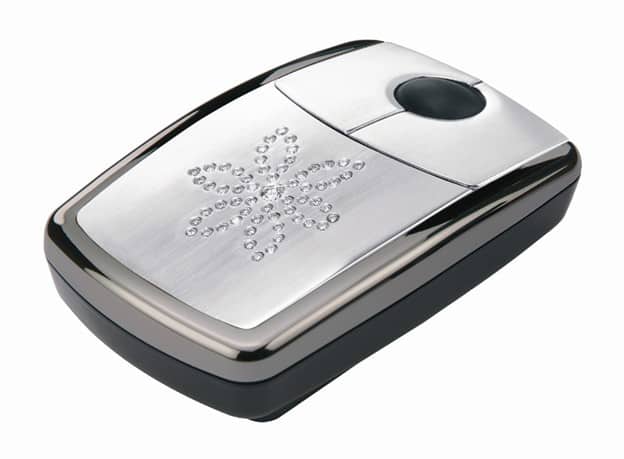 Pat Says Now manufactured this USB mouse from 18-karat white gold. They called it the “World’s Most Expensive Computer Mouse” despite the fact that as you’ll see, it has some competition. When it came out in 2010, the mouse cost $26,730, which in today’s money is a bit more than $34,000.

The mouse has 59 genuine diamonds embedded into its body. Despite the fact that the mouse technology itself is completely average – two buttons, scroll wheel, and an 800dpi resolution – this mouse is all about the metals.

Pat Says Now can make these mice with customizable initials spelled out with diamonds, or any pattern the buyer wants. It can be made from other colors of gold, including red, yellow, or the standard white and trimmed with white or black to give the design more contrast. The Swiss art developer never made a wireless option, but at least you can get your fill of diamonds, if not technology. 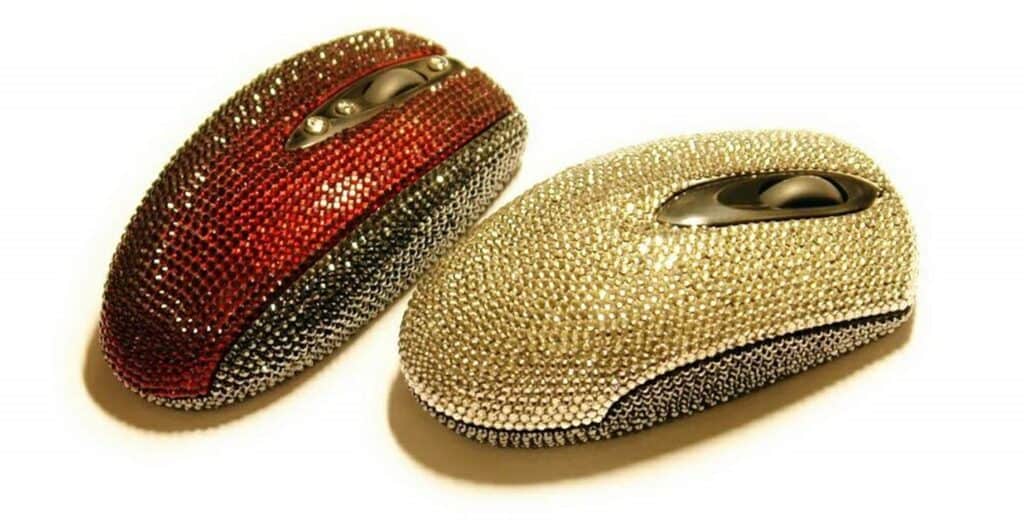 The price of nearly $35,000 reflects its luxurious, jeweled appearance, which is gold and platinum colored. Even the two pushbuttons are covered in stones. Additionally, the mouse is wireless and uses laser technology to connect to your computer.

Strass simulates the appearance of diamonds. It used to be made of rock crystal but for the past couple of centuries, it’s been made from manufactured crystal glass or acrylic. In America, strass is called “rhinestone” due to the original materials being sourced from the river Rhine in Switzerland.

However, in Europe, rhinestones were very rare until the jeweler, Georg Friedrich Strass from Alsace, a region in France at the intersection of Germany and Switzerland, came up with a way to create them. He used lead glass coated with a metal powder to create the look of rhinestones. This new jeweling material came to be known as “strass” in Europe as a result, which is still used in place of “rhinestone.”

Computer mice are not often bought as luxuries. They are either passed off as functional necessities or bought for their tech features alone. The ones on this list use not only functions but gold and jewels to drive prices. You may not “need” a computer mouse that costs tens of thousands of dollars. But there are definitely less functional investments to make.