Purses are probably the most popular accessory piece and they help tie an outfit together. Of course, purses are available at every price point. While most people feel comfortable shelling out $50 – $100 for a bag, the wealthiest people in the world pay hundreds of thousands, even millions for a single purse. In fact, most of the world’s most expensive purses cost well over $1 million! All of the purses on this list are limited edition and some are one-of-a-kind pieces. 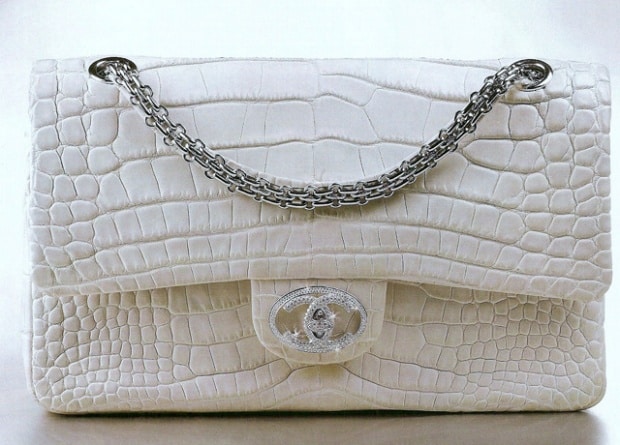 In 2008, Madonna and Karl Lagerfeld sold a Chanel Diamond Forever Classic Bag for €300,000 during that year’s AMFAR dinner auction to raise money for the fight against AIDS. 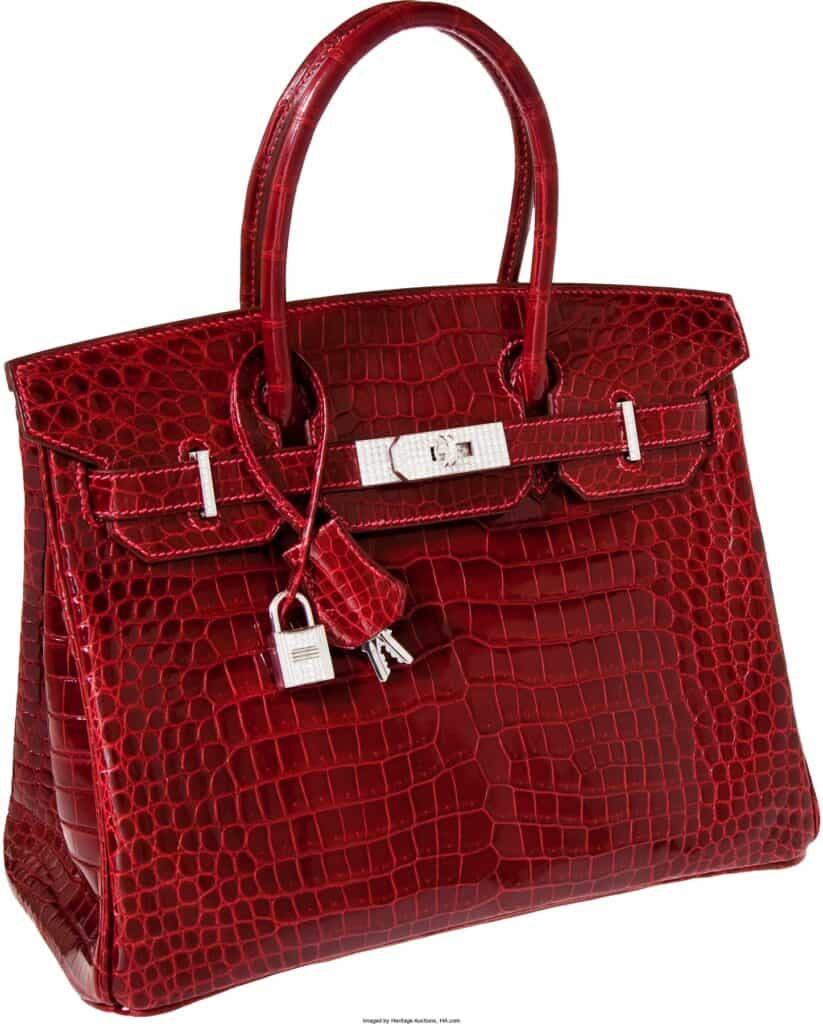 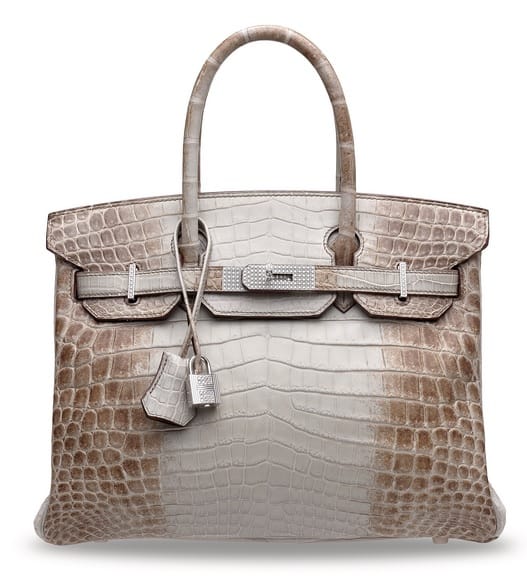 The name “Himalaya” refers to the color of the Diamond Niloctus Himalaya Birkin, which is a smoky gray that fades into a pearly white. This resembles the snow-capped Himalayas. 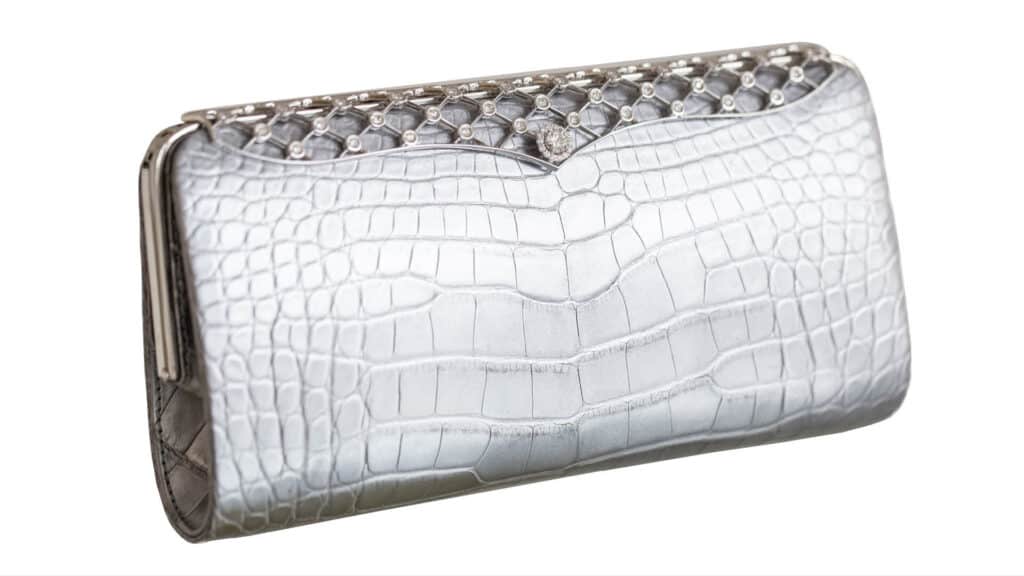 The Cleopatra Clutch, from South African handbag designer Lana Marks, is a favorite purse among the wealthy women of the world. The purse of a Cleopatra Clutch varies and depends on the type of materials and gemstones featured on the bag. The price can range between $100,000 – $400,000. Sometimes Lana Marks uses exotic materials like ostrich leather, American alligator, and crocodile skin from Australia, New Guinea, and Africa.

One of the most expensive Cleopatra Clutches that Marks ever made was for Chinese actress Li BingBing. The bag cost $400,000 and was made with special tanned Alligator with 40 karats of very high quality black diamonds, 18 karat gold, and her name written in pink gold with pink diamonds.

While she was still alive, Princes Diana often commissioned Lana Marks to make purses for her.

In 2012, Hermès artistic director for jewellery, Pierre Hardy, released a special collection of mini-handbags modeled after some of the brand’s most iconic pieces. One of the purses was the Hermès Chaine’d Ancre Bag, which cost $1.4 million. The bag featured a unique design of intertwining chains made of white gold and covered in brilliant diamonds. As its name suggests, the purse was inspired by Hermès’ Chaine’d Ancre purse hardware and jewelry. Like the other purses in Hardy’s collection, the Chaine’d Ancre Bag could be worn as a bracelet. Additionally, only three Chaine’d Ancre Bags were available.

While all of the bags in Pierre Hardy’s collection featured diamonds, the Hermès Chaine’d Ancre Bag had the most with 11,303 diamonds, with a total weight of 86.24 carats. 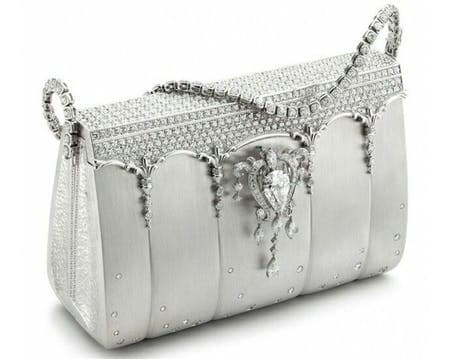 Not much is known about this special Hermès Birkin by Ginza Tanaka because it came out way back in 2008, long before the covering news about luxury items became a regular part of the internet. However, pictures of the Ginza Tanaka Birkin do exist and there is some information about the bag’s features. The Ginza Tanaka Birkin is made of platinum and covered in 2,000 white diamonds. The bag is very versatile and its pieces can be used a jewelry. The purse strap, which is made of diamonds, can be removed and used as a necklace. This converts the purse into a clutch.

The centerpiece of the Ginza Tanaka Birkin is an 8-carat diamond that can be removed and worn as a brooch. 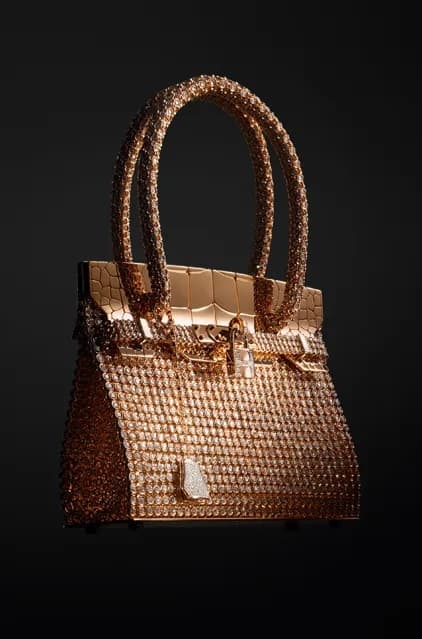 The next purse on this list is the most expensive Hermès bag in the world. Despite the oversized $2 million, the Hermès Sac Bijou Birkin is actually a mini version of the standard Hermès Birkin. This is because the purse doubles as a piece of jewelry. The Sac Bijou Birkin can be worn as a bracelet and the bag is made of rose gold, covered in white diamonds. The purse features 2,712 diamonds with a combined weight of 89.22 carats. In addition to being the priciest Hermès bag ever, the Sac Bijou Birkin is also one of the brand’s most exclusive handbags, as only three pieces were made.

To go with the Sac Bijou Birkin, Hermès also released three Kelly purse bracelets made of rose gold that looked like crocodile skin and 1,160 diamonds. 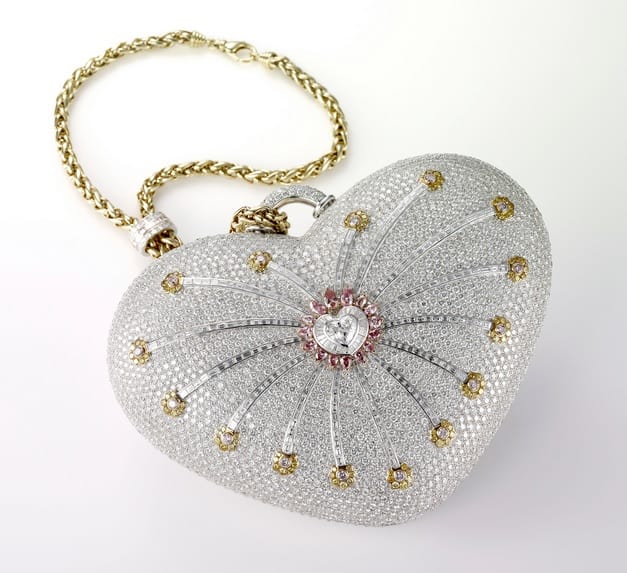 Although there are few purses that were recently released that cost more, the Mouawad 1001 Nights Diamond Purse still holds the Guinness World Record as the Most Valuable Handbag in the World. Initially released in 2010 with a price tag of $3.8 million, the 1001 Nights Diamond Purse is made from 18-K gold and 4,517 diamonds in various colors. Mouawad used 105 yellow, 56 pink, and 4,356 colorless diamonds. The total weight of the diamonds is 381.92 carats.

In 2017, the Mouawad 1001 Nights Diamond Purse was exhibited in the gallery of Christie’s Hong Kong and was up for sale through the auction house’s Private Sales. However, it seems that no one bought the bag as it was still for sale in 2019.

The Mouawad 1001 Nights Diamond Purse was hand crafted by skilled artisans over a period of 8,000 hours. 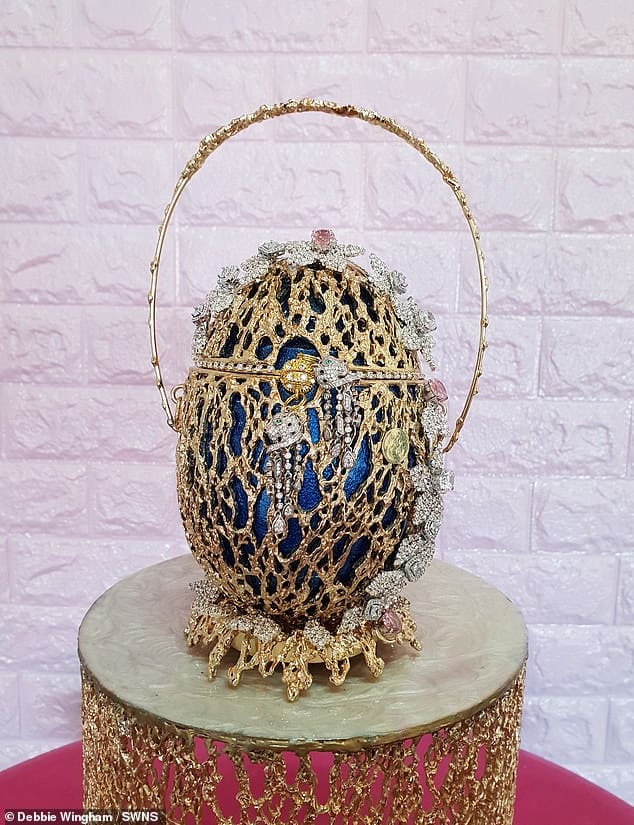 You’ve probably seen pictures of Fabergé eggs, the rare jeweled Easter eggs from Russia, but you most likely have never seen a purse inspired by these extravagant Easter eggs before. Well, in 2019, Debbie Wingham, a clothing and accessories designer for the world’s ultra-wealthy, created a purse decked out like a giant Fabergé egg. The purse is made out of an Emu egg and upcyled designer items from an anonymous American client.

The fabulous egg purse, which has a value of $6.7 million, is covered in 8,000 diamonds and lined with a silk Hermès scarf. The clasp is a pair of $40,000 Cartier earrings. The purse also features an outer shell made from 24-karat gold by Italian designer Alessandro Galanti. There are also three pink diamonds (worth $1.9 mil) and two flawless white diamonds (around $265,000) on the purse. 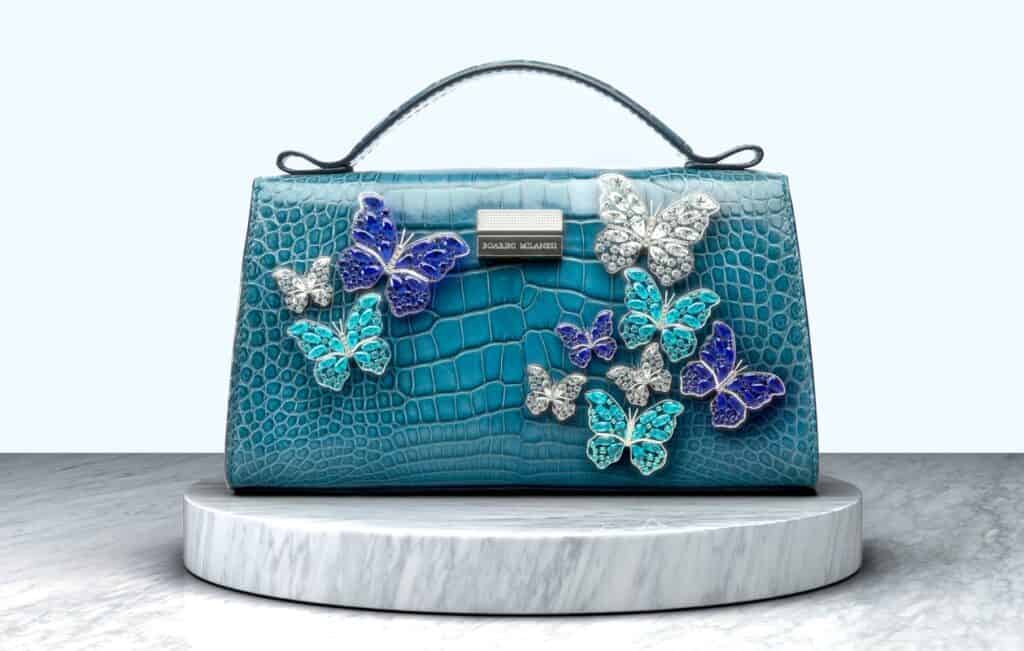 In 2020, Italian luxury brand Maison Boarini Milanesi created a limited edition version of its Parva Mea purse, worth €6 million (about $7 million), to raise awareness about ocean conservation, making it the most expensive purse ever in the world. The bag is made out of an aqua colored alligator skin and features 10 white gold butterflies and a diamond-paved clasp. Some of the butterflies are adorned with diamonds, while others are covered with sapphires. The remaining butterflies have Paraiba tourmalines on them. In total, there are about 130 carats of gemstones on the bag.

According to Boarini Milanesi, the color of the purse as well as all of the gemstones they chose were inspired by the sea. Only three of these limited edition Parva Mea purses were made and each one was personalized for the client that bought a bag.

Whilte the limited edition Maison Boarini Milanesi Parva Mea cost a whopping €6 million (about $7 million), the brand only donated about €800,000 (about $950,000) from the sale of the bags to help clean the world’s oceans.

9 Most Expensive Types of Wood in the World