10 Most Expensive Birkin Bags Ever Made

Hermès is a French luxury brand that is mostly known for its scarves and bags. While Hermès has several popular bag designs, one of its most coveted is the Birkin. The Birkin bag was first released in the late 1980s and named for English actress and singer Jane Birkin. Since then, Birkin bags have become status symbols as they are fabulously expensive and inaccessible to regular people. Birkins are even hard to come by for the rich and famous as there is a long waiting list just to buy a Birkin directly from Hermès.

However, Birkins can be found on the secondary resale market. Although they are second-hand, these Birkins do not come cheap and typically cost hundreds of thousands of dollars at auctions. Yes, Birkins (especially those that are special editions) are in such high demand that they need to be auctioned. Ever single Birkin bag on this list is exceptionally expensive and rare. 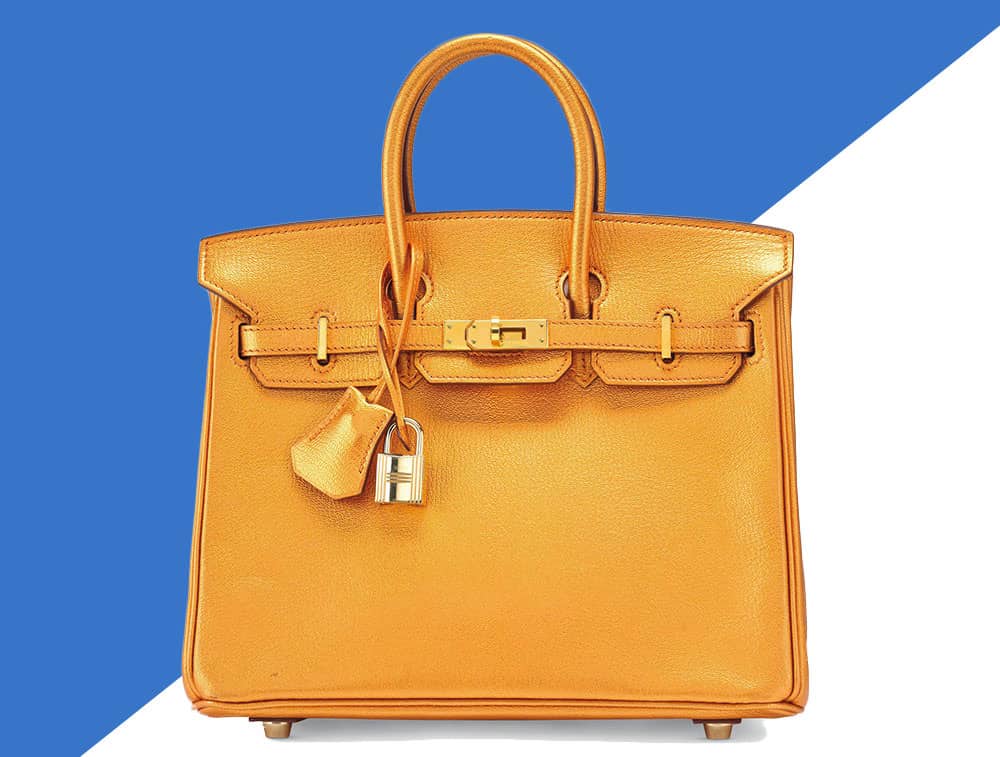 In 2005, Hermès released a very limited collection of Metallic Birkin bags. The Metallic Birkin came in silver or bronze and was inspired by the famous window displays designed by Leïla Menchari for the Hermès flagship store in Paris. Unlike most of the other Birkins on this list, which are made from exotic leathers, the Metallic Birkins were made from regular Chèvre Goat Leather. However, they were dyed with metallic pigments, which is a unique finish for a Birkin bag.

Designers had to use so much metallic pigment on the Metallic Birkin bags that it gave them a different texture from the usual chèvre material. 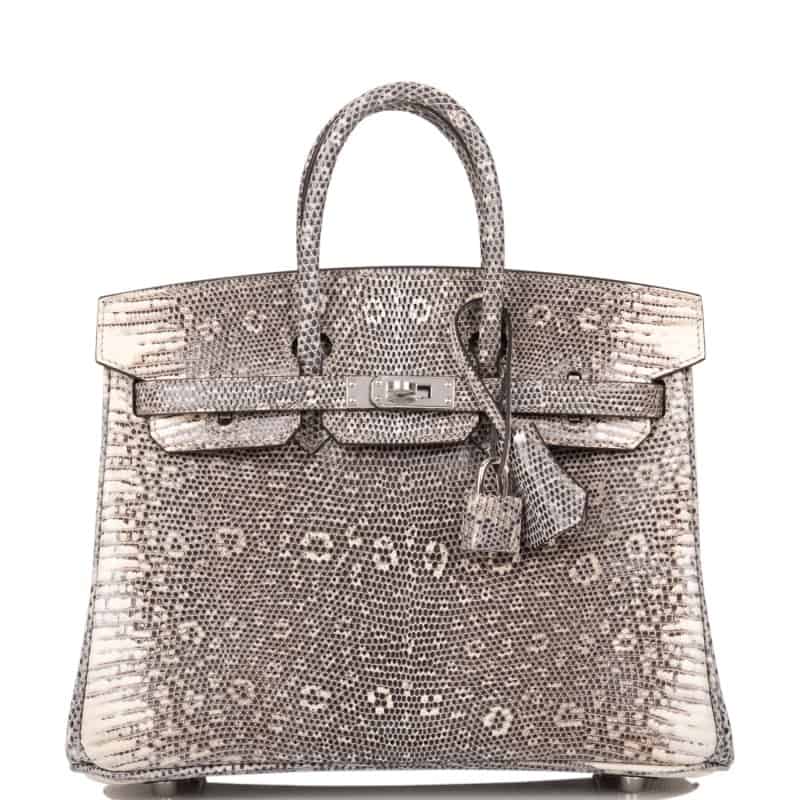 In general, lizard skin bags are incredibly rare because lizards are very small creatures and not much skin can be harvested. So, of course, this Ombré Birkin made of lizard skin is very expensive and now impossible to find. A couple of these lizard Ombré Birkin bags have come up for sale over the years and the most someone ever paid for one was $137,500. The interior of this Ombré Birkin is lined with Parchemin chevre and has one zipper pocket with an Hermès engraved zipper pull.

The hardware on the lizard Ombré Birkin bag was made out of Palladium, a rare silvery-white metal that looks similar to platinum. 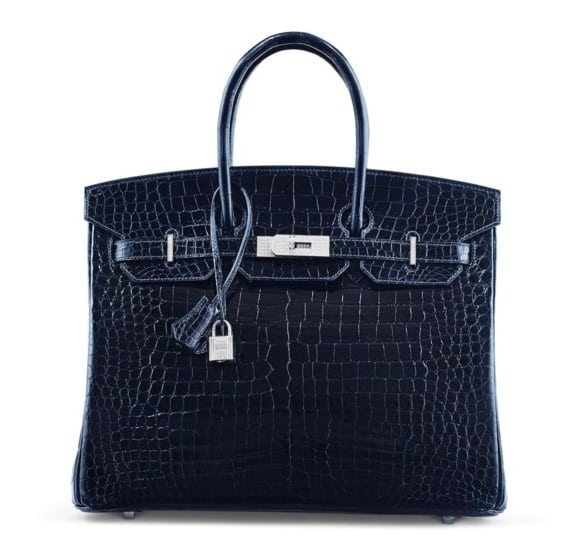 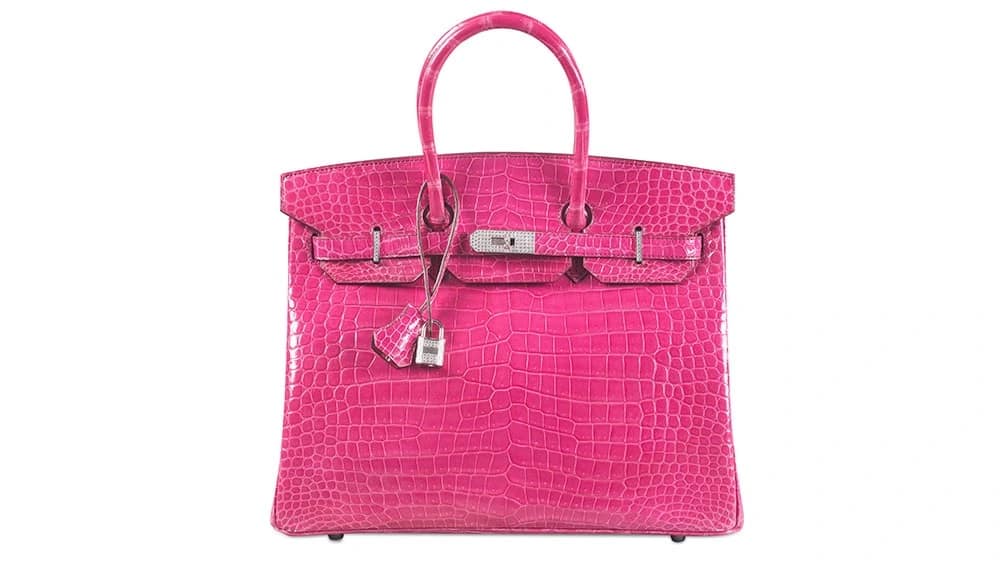 Like a few of the other Birkin bags on this list, at one point, this Fuchsia Birkin held the record for being the most expensive handbag in the world. It was sold by Christie’s at auction in Hong Kong in 2011 for $222,000. The Fuchsia Birkin was made from authentic crocodile leather dyed a bright shade of fuchsia pink. The purse also featured 18K white gold hardware encrusted with sparkling white diamonds. 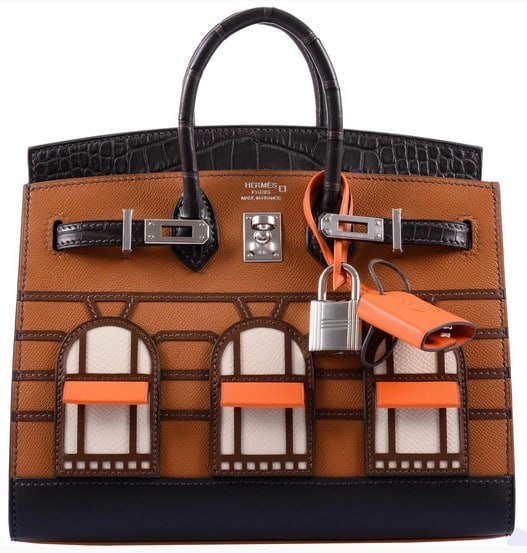 After Charles-Émile Hermès took over the company, he relocated the brand’s flagship store to the iconic Rue du Faubourg Saint-Honoré in 1880, where it has remained ever since. The Sac Birkin Faubourg looks identical to the flagship store’s facade. 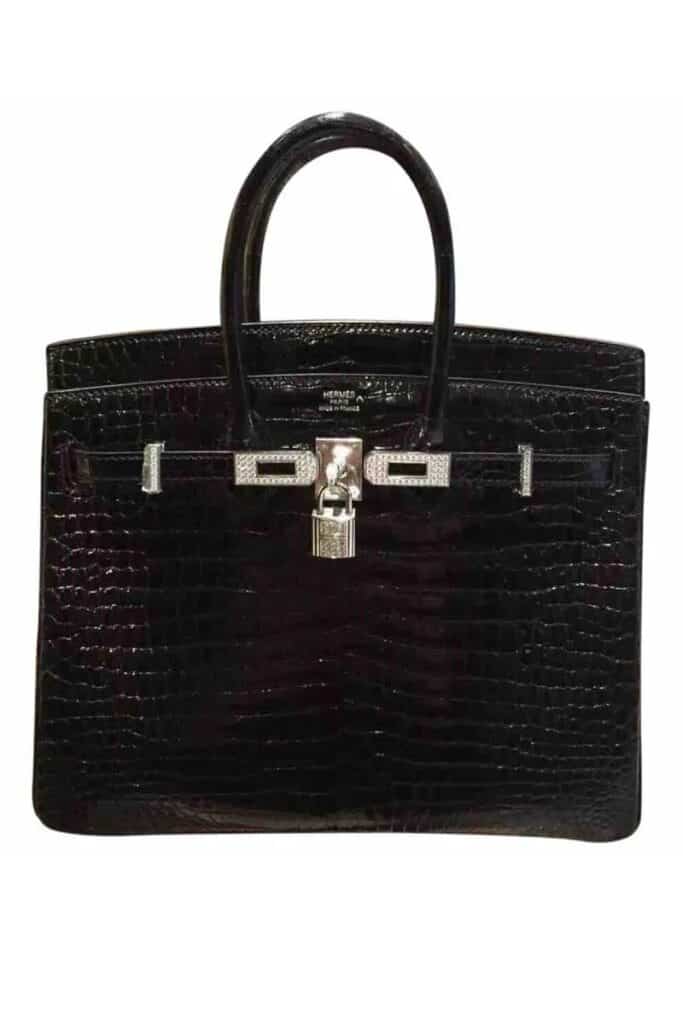 Diamond Crocodile Birkin bags are usually made from the skins of saltwater crocodiles from Australia and Southeast Asia. 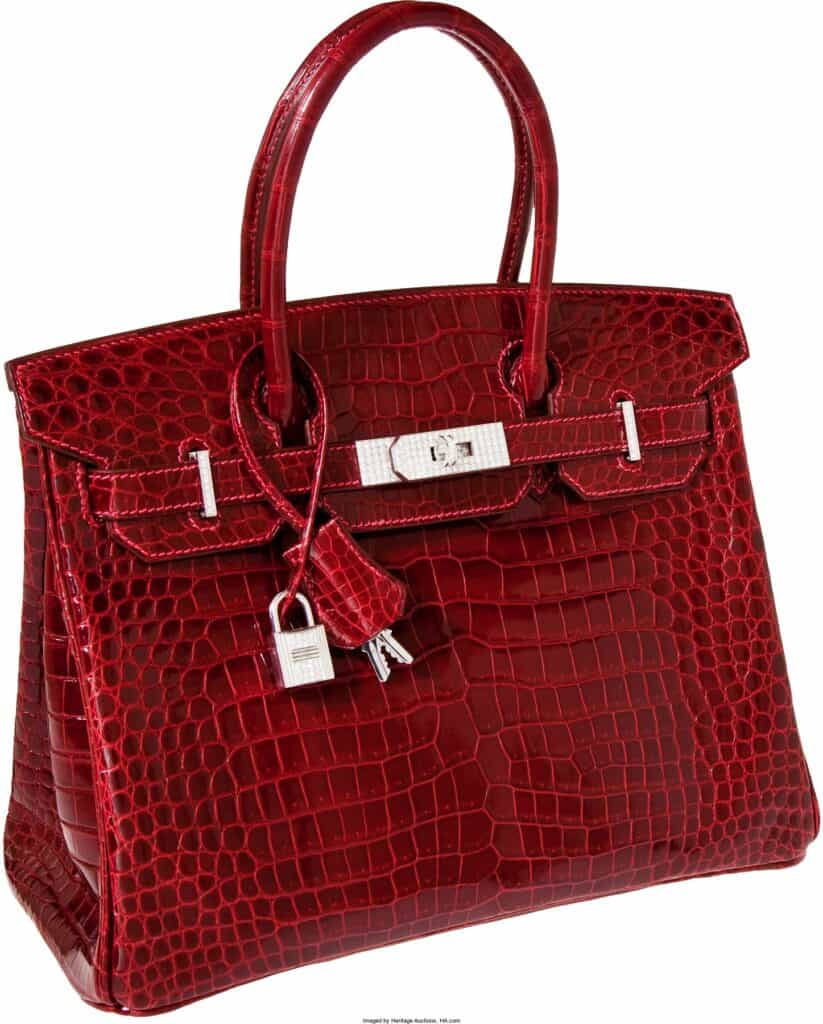 The Exceptional Collection Shiny Rouge H Porosus Crocodile Birkin bad was made from red-dyed crocodile skin and had 18K white gold hardware that was covered in white diamonds. 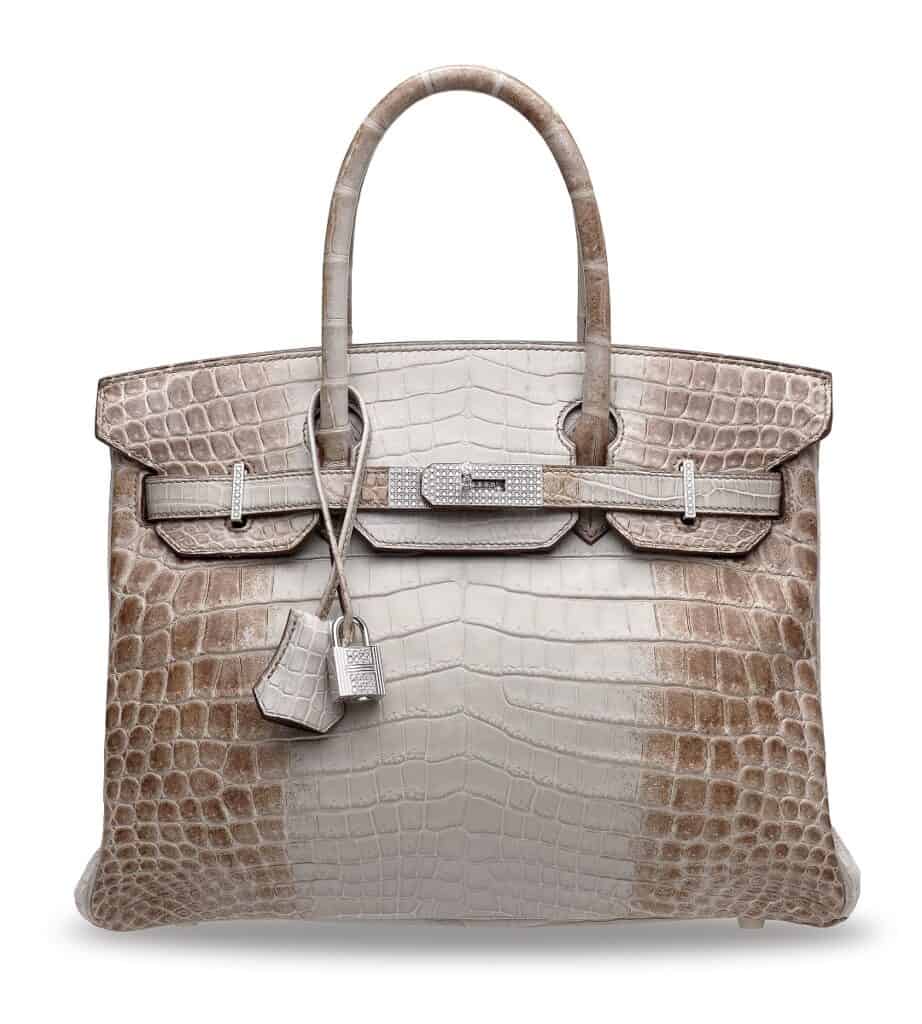 The Diamond Himalaya Birkin is crafted from Nile crocodile hide that is hand-dyed in a meticulous and time consuming process. 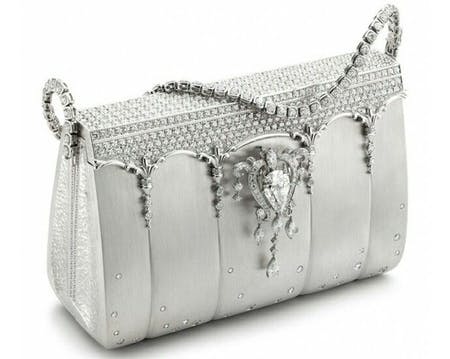 The Birkin Bag by Ginza Tanaka is a pretty mysterious bags, but it consistently comes up as the second most expensive Hermès bag – of any design – ever. There are no official sources detailing the bag’s details and sources vary on the price. The Ginza Tanaka Birkin was either sold for $1.4 or $1.9 million. Only one of these unique bags was ever made and it was released back in 2008.

The bag is made out of platinum and adorned with over 2,000 white diamonds. There is a large 8-carat diamond on the front of the Ginza Tanaka Birkin that can be removed and worn as a brooch.

The diamond strap of the Birkin Bag by Ginza Tanaka can be removed and worn as a necklace and the purse can be carried as a clutch. 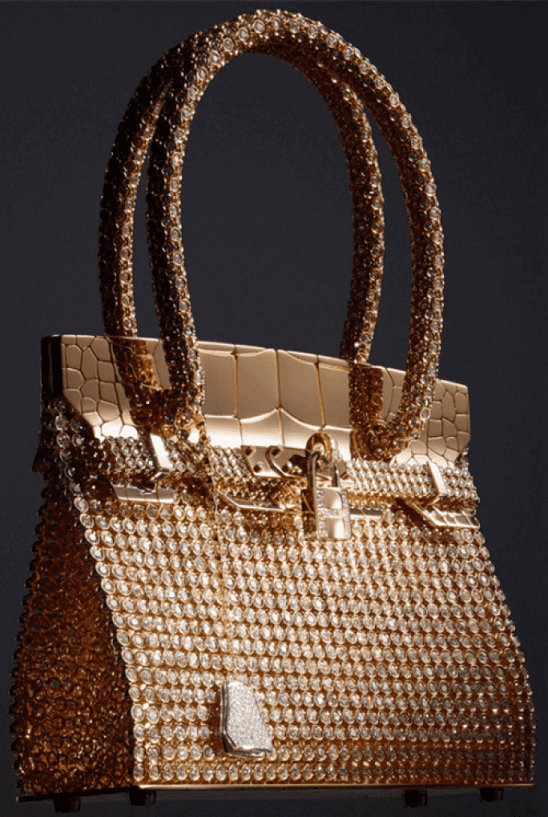 The Sac Bijou Birkin was released in 2012 with a price tag of $2 million, making it the most expensive Birkin bag ever. This very limited edition Birkin was part of a collection designed by Pierre Hardy, the creative director of fine jewelry at Hermès. The Sac Bijou is much smaller than regular Birkin bags because it is meant to be worn as a bracelet.

The entire bag is made of rose gold inlaid with 2,712 diamonds. The top flap of the Sac Bijou was textured to look like crocodile skin. Only three rose gold diamond Sac Bijou Birkin bags were made, making this an incredibly rare purse.

In addition to the Sac Bijou Birkin, the Pierre Hardy collection also featured a Rose Gold Kelly, which also sold for $2 million.

10 Most Expensive Bottles of Bourbon Ever Produced

8 Most Expensive Stocks on the Market