Starbucks is already known as an expensive cup of coffee by default. But did you know that you can order unlimited extra espresso and flavor shots to take your coffee to the next level? So long as you have a wallet that can handle it and a cup that it can fit in, you can order crazy custom drinks that are like liquid electricity. The caffeine content in some of these cups could energize an elephant. 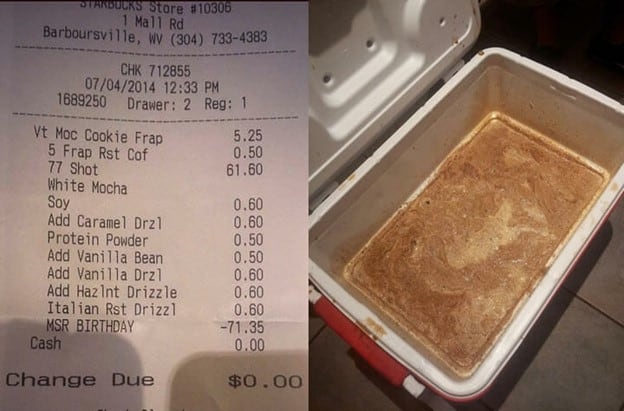 To kick off this list, we have this Venti Mocha Cookie Crumble Frappuccino, ordered by a man named Jarrod for $71.35. It had 77 shots of espresso in it, a heaping helping of white mocha, and drizzles of caramel, vanilla, and hazelnut syrup.

Unlike some of the classier drinkers on this list, Jarrod brought a cooler to contain his magnificent Frappuccino, making all those beautiful sugary ingredients look like post-tailgate hazelnut barf. Oh well!

By default, this drink is a mix of Frappuccino Roast coffee, frappe chips, milk, ice, whipped cream, vanilla whipped cream (there’s a difference), mocha drizzle, mocha sauce, and between each topping a layer of chocolate cookie crumble. A normal Venti Mocha Cookie Crumble Frappuccino coffee, which is 24 fl oz and 590 calories, has nothing on Jarrod’s version. 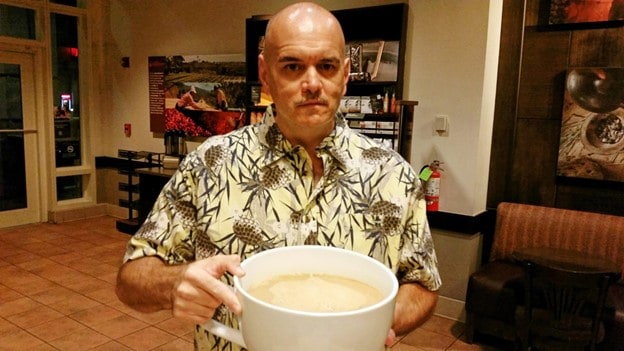 This Grande Latte was ordered by William E. Lewis Jr. in an explicit attempt to achieve the world record for expensive Starbucks coffees. This isn’t the last time you’ll hear his name – he defends his title later in this list, quite successfully.

For now, we’re talking about this Grand Latte, packed with 99 espresso shots, served in style in an enlarged version of a normal coffee cup (some on this list opt for cement buckets or milk tins instead). It had 20 servings of vanilla syrup in it too. Lewis paid $83.75 for this latte and shared it with his friends.

Grande lattes at Starbucks are espresso coffee drinks poured into a base of steamed milk. A normal Grande Latte comes with two shots of espresso, which is about 128 mg of caffeine. For comparison, Lewis’s version of the drink contained about 6,336 mg. 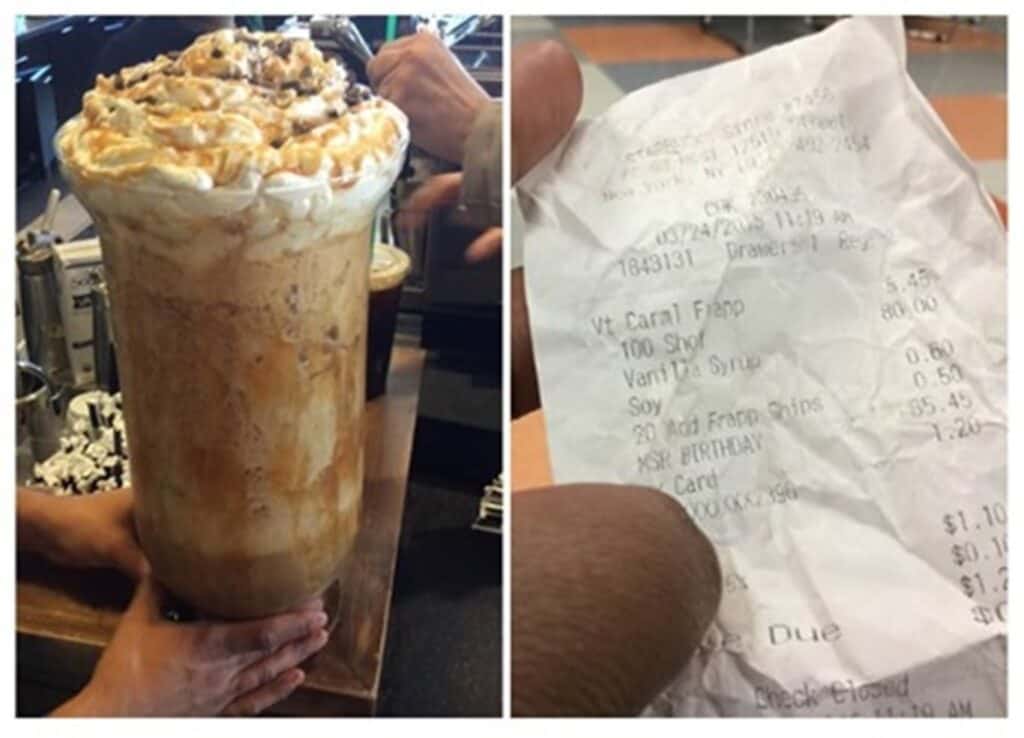 As this list ascends in price, it also seems to ascend in the sheer amount of espresso these drinks contain since it’s Starbuck’s most expensive additive. This Caramel Frappuccino represents the list officially reaching 100 servings in espresso content. The huge glass mug that contained this drink revealed its tantalizing layers of flavor to Renee C., who was the one crazy enough to order it.

Frappuccinos are trademarked Starbucks drinks. They’re built on coffee or crème, blended with sweetened ice, mixed with sugary syrups, and topped off with whipped cream, flavored chips, spices, and more. They were invented in 1996 in Boston and come from “frappe,” which in New England is what people call a drink made from ice cream, espresso powder, frothy milk, and cappuccino mix (from the French, “lait frappe”). 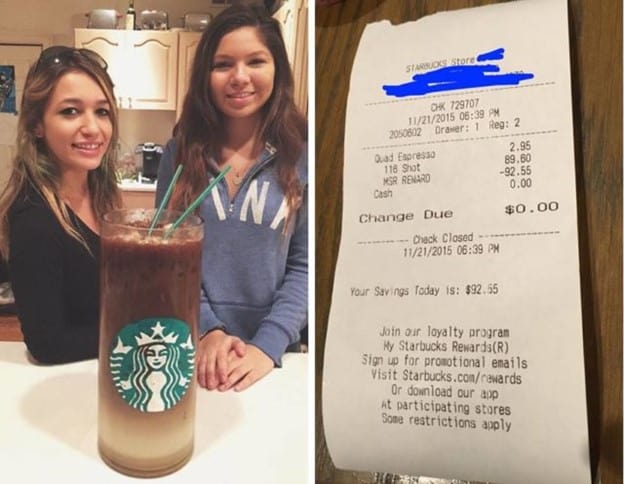 Kiersten Vorv and Shaine Choen ordered a rewards drink in the form of a Quad Espresso, valued at $92.55. Unlike some drinks on this list, they used a Starbucks glass and took care of it right there with two extra long straws. Though the drink is called the Quad Espresso, their version of it contained 120 extra espresso shots.

Starbucks sells a ton of rewards drinks per year, most of which are not $90+ in value. It is frequently cited as an industry-leading rewards program due to its versatility. As it turns out, a rewards program for something that people need every day like coffee is insanely profitable, as the memberships of their nearly 20 million loyalty customers constitute almost half of Starbucks’ entire revenue stream.

In Stratford Connecticut, a man named Justin tried to win the record for the most expensive Starbucks drink with this White Mocha Frappuccino (though as you’ll soon read, he couldn’t beat the previous White Mocha champion). To try and win the prize, he created a drink that utilized 112 espresso shots, 55 servings of Frappuccino Roast, 5 bananas, 70 shots of white mocha, and a ton of caramel syrup.

To contain this $101.50 drink, Justin brought his own huge plastic container, which looks like a bucket you would mix concrete in. He brought his friends to finish the monster off.

The most amazing thing about Justin’s espresso monstrosity, though he wasn’t able to beat the record of the next drink on our list, is that it actually cost him $0 to drink! He had accumulated enough Starbucks Rewards points to cover the entire cost of the drink. 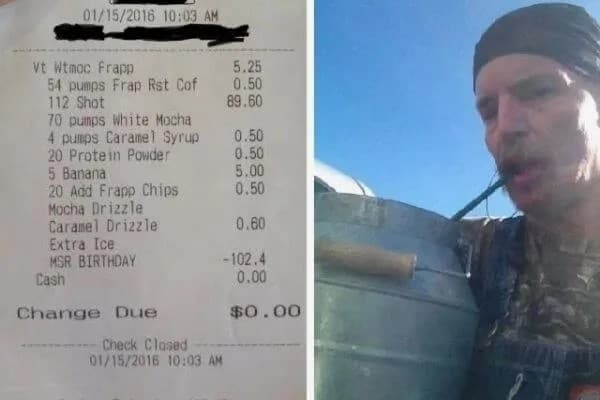 A man who only offered the name “Thomas” tried to one-up the previous record holders with another White Mocha Frappuccino, costing only slightly more than the previous one and then discounted as a birthday gift. This $102.04 cup of coffee included not only 102 shots of espresso but 54 doses of Frappuccino roast, 4 of caramel, 70 of white mocha, 5 whole bananas, and about 5.5 tablespoons of protein powder.

This powerhouse gainer’s coffee concoction is intense. If the sweetness wasn’t enough already, it was also topped with a handful of Frappuccino chips, extra ice, and a dollop of liquid caramel.

Frappuccino Roast, despite the name, is intended to be brewed cold. It comes in a powder that is pretty bitter by itself, which is why Starbucks pumps their iced coffees full of delicious sugary syrups. Thomas may have one-upped them, however, using a metal milk can that he brought to Starbucks himself to contain the sheer amount of sugar in his custom drink. He holds the distinction of having the most expensive cold Starbucks coffee in the world. 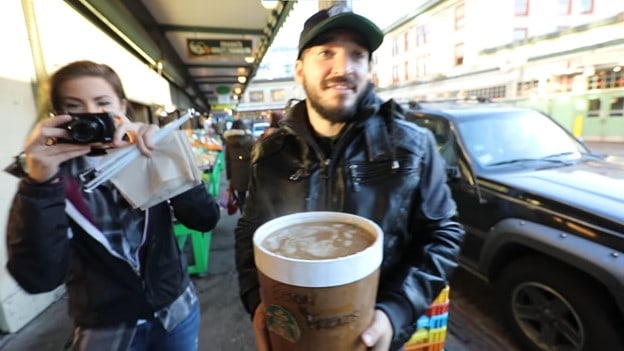 The YouTuber Elton Castee used to be one of Vine’s most profitable creators. His stuff has been shown on MTV’s Ridiculousness, iFunny, The Chive, and other shows. He now has over 650,000 Twitter followers to his name, plus one truly ridiculous cup of coffee.

The Caffe Americano that Elton ordered from a Starbucks in Seattle, Washington contained 104 espresso shots and cost him $102.15. He had to go to Target first to find a container large enough to contain his caffeinated monstrosity.

Elton Castee was actually a licensed massage therapist out of school for five years before getting into comedy. His big break, if you want to call it that, came in the form of a Vine that went viral, showing him doing a cannonball into a public fountain. 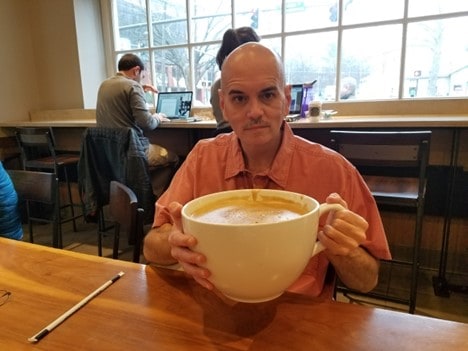 Lewis brought his own super-sized coffee mug to contain his creation, which was stocked with a base of coconut milk and imbued with 170 espresso shots. In total, the drink cost Lewis $148.99.

Not only is the Super Venti Flat White the most expensive Starbucks coffee but it’s also one of the largest at 240 ounces deep. This drink contains about 11,000 mg of caffeine, which is the equivalent of about 122 cups of normal coffee.

Starbucks was founded in Seattle in 1971. Since then, it’s been known as an academic haven for coffee and tea lovers who don’t mind spending a little extra to get high-quality morning pick-me-ups. But despite its reputation as being expensive, its average cup of coffee costs $2.75.

In this list, we compiled the ones that are ludicrous in comparison, coffees that cost $100 or even more. These people seem almost locked in competition for the most insanely priced Starbucks drink. The real question is: how much espresso does one person need? Or maybe that’s not the question. How about: how much can one person get? That’s probably it.