9 Most Expensive Nikes Shoes Ever

Nike began life in 1964 as Blue Ribbon Sports, founded by the University of Oregon’s track coach, Bill Bowerman, and Phil Knight, one of his former runners. They changed the name to Nike in 1978. Over 40 years later, Nike is sold in over 170 countries, with yearly revenue of over $35 billion.

Their partnerships with celebrity sports stars have defined specialty sub-brands within Nike for decades. Many of the most expensive Nikes ever sold are mostly the results of these sponsorships while others are pieces of history and one-of-a-kind pieces any shoe collector would pay top dollar for.

Continue reading to learn about the history and condition of the 9 most expensive Nikes ever sold. 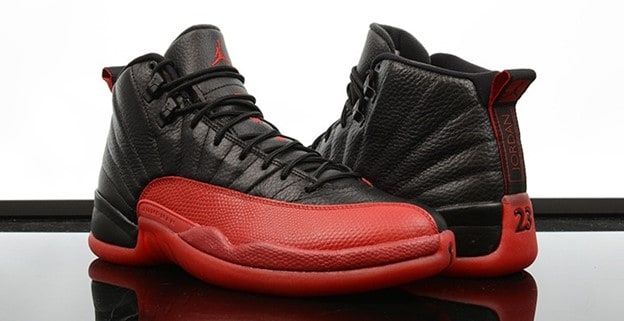 This pair of Air Jordan 12 shoes are known as the “flu game” shoes sold in 2013 for $104,765, not just because they were worn by Michael Jordan (though that didn’t hurt!). Preston Truman, a teenage ball boy at the game, fetched Jordan some apple sauce while the ballplayer was hooked up to IVs in the locker room, in the throes of flu.

Three years after the game, a man offered Truman $11,000 for the shoes. Truman realized then how valuable they were and deposited them in a safety box until 2013 when they sold for six figures. 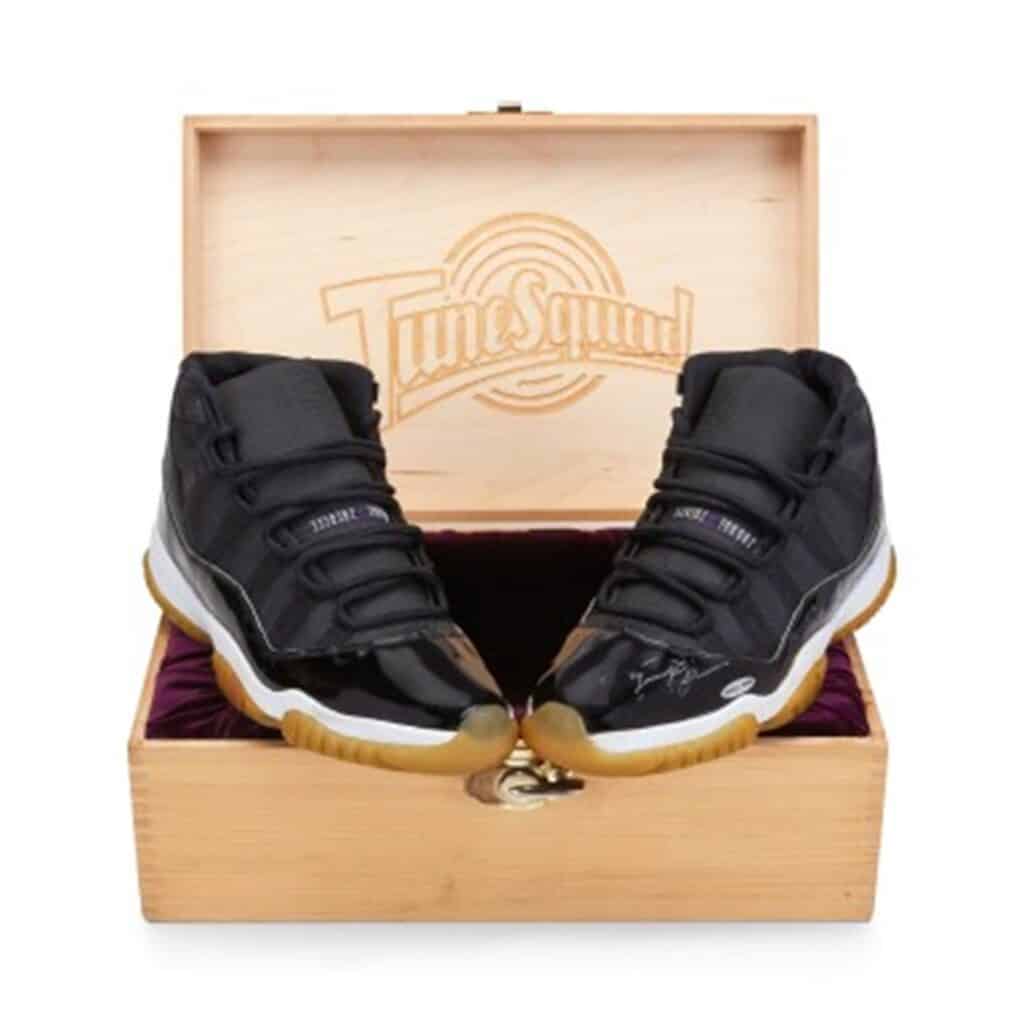 Air Jordan 11 shoes from 1995 would already be pricey today. But these particular shoes, known as the “Space Jam Sample” were sold at a Sotheby’s auction in 2021 for $176,400 because of their connection to the film, Space Jam.

Though he wore many pairs of Air Jordan 11s for the film, Michael Jordan never put on these particular shoes. This is why they have a like-new condition and a silver signature by Jordan himself on the left shoe. The shoes were sold in a custom-made box etched with “Tune Squad” on the inside, made of wood and velvet.

Space Jam is based on a series of two Super Bowl Nike ads, known as “Hare Jordan” and “Aerospace Jordan,” featuring Michael Jordan and Bugs Bunny. The ads were so successful that a film based on the campaign was greenlit by producer Ivan Reitman.

When Jordan retired from basketball in 1993, the film was shelved. When he made his comeback in 1995, the film resumed production and came out in 1996. 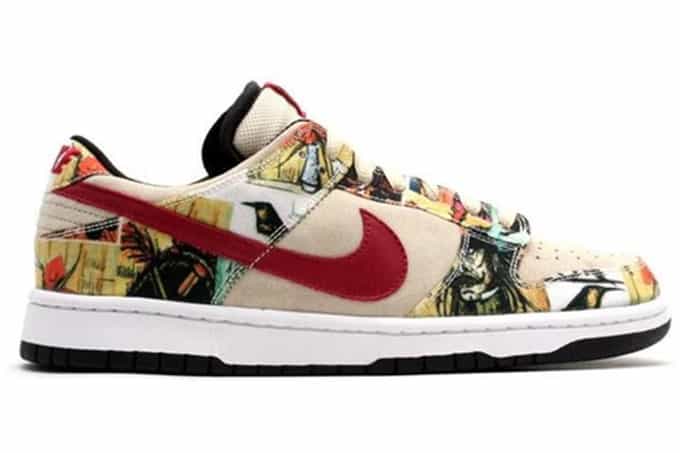 There are other sizes available online in this design scheme, which is rumored to have been used only around 175 times. These shoes were part of “White Dunk,” a traveling exposition put on through Nike SB in 2002 in Paris.

For private shoe sales that aren’t game-worn Air Jordans or signed examples, these Nike Dunk SB Low Paris shoes are about the most expensive ever sold.

These shoes were handmade by Bill Bowerman, best known as the track coach for the University of Oregon in the 70s. He is also one of Nike’s founders and provided a lot of the energy that would define the brand for years to come.

These Handmade Prototype Logo Track Spikes were made for Harry Jerome, the track and field sprinter/Olympian who ran for Canada. These shoes have prototype Nike logos on the sides. They also have waffle soles under the track spikes.

Jerome debuted these shoes at the 1964 Olympics, at which he won the bronze medal.

These shoes were made in the 1960s as Blue Ribbon Sports was transitioning into the company now known as Nike. The brown glue used to attach the materials (you can still see it in the seams) unfortunately gave Bowerman nerve damage after extended exposure.

This is why the famous coach had to walk with a cane in the later years of his life.

Unlike most of the shoes on this list, which are modern sportswear designed for basketball players and musicians, the Nike Waffle Racing Flat Moon Shoes from 1972 are pieces of Nike history. They were designed by Bill Bowerman, the track coach from Oregon University, and hand-made by Geoff Hollister, one of Nike’s first and most famous employees.

These shoes were made from nylon, leather, suede, and rubber. They’re so old that Nike didn’t even have the tech to make a single-piece sole. Instead, the waffle soles were made in two pieces. The word “Nike” does not appear anywhere on them.

These shoes were created for runners in the Olympic Trials in 1972. Only 12 pairs were ever made and only these remained unworn until being sold in 2019. 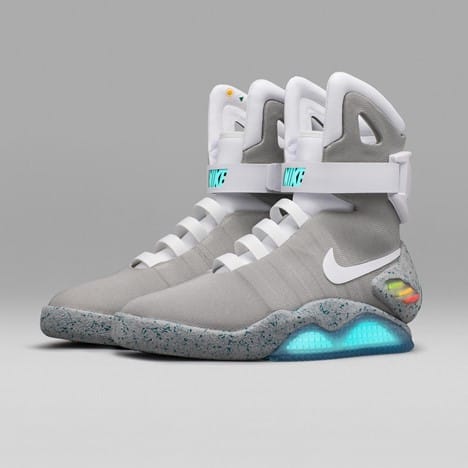 The Nike Mag has the “Back to the Future” subtitle because of its partnership with the Michael J Fox Foundation. Fox, as you probably know, played Mart McFly in the famous film. After being diagnosed with Parkinson’s he created the foundation to raise money to find a cure for the debilitating disease.

Therefore, buying these $500,000 Nike Mags supports a good cause in addition to giving you amazing shoes. Only 89 of these limited-edition shoes were made.

Fox wore Nike Mags in Back to the Future, hence the connection. They were rebuilt for the Fox Foundation and raised nearly $10 million for Parkinson’s research. The foundation first partnered with Nike in 2011. 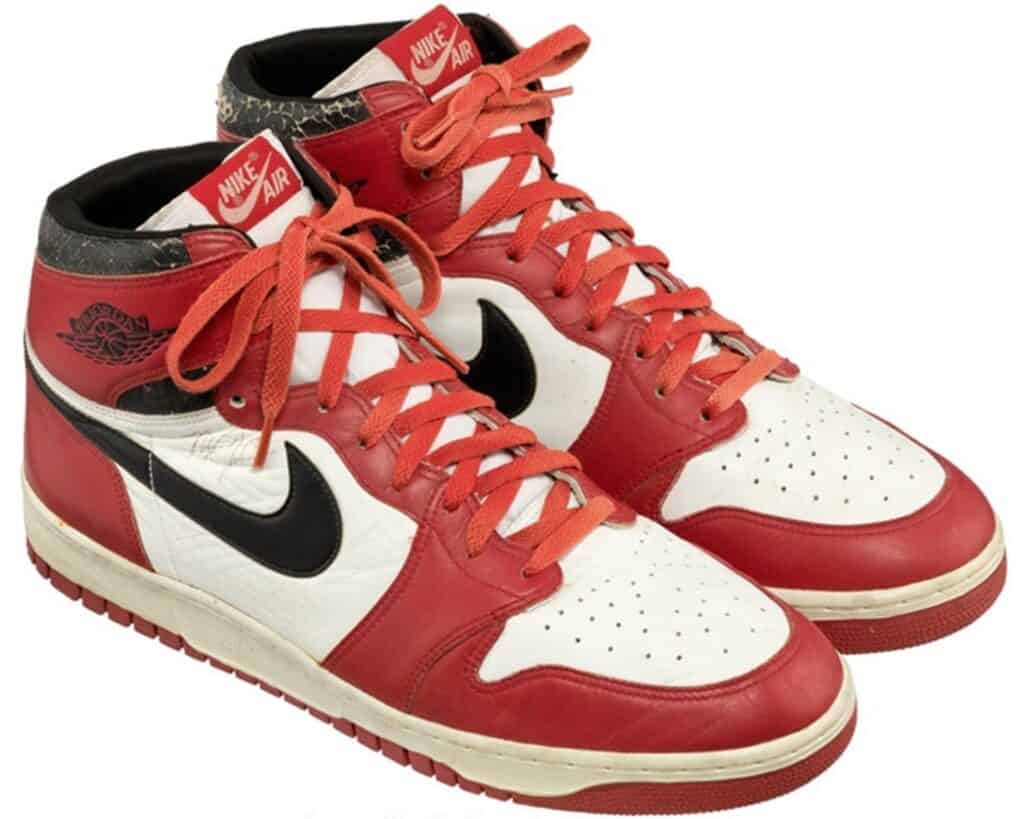 This pair of Michael Jordan Game Worn & Signed Nike Air Jordans went up for auction through Heritage in 2022. They were worn by Jordan at the MECCA Arena on April 1, 1986 in Milwaukee. Jordan was mostly on the bench that day due to getting a broken foot the previous October. Since Jordan was Jordan, he still scored 28 points against the Bulls that day.

These shoes’ unique look comes from being redesigned around Jordan’s injury. The soles were wider and softer than usually to ensure that his foot had room to heal. These shoes were estimated to sell for $1 million but ended up taking $675,000.

These shoes were not only designed uniquely but they also had a unique production defect. The right shoe was missing an eyelet. Jordan also signed the left shoes with a ballpoint pen. 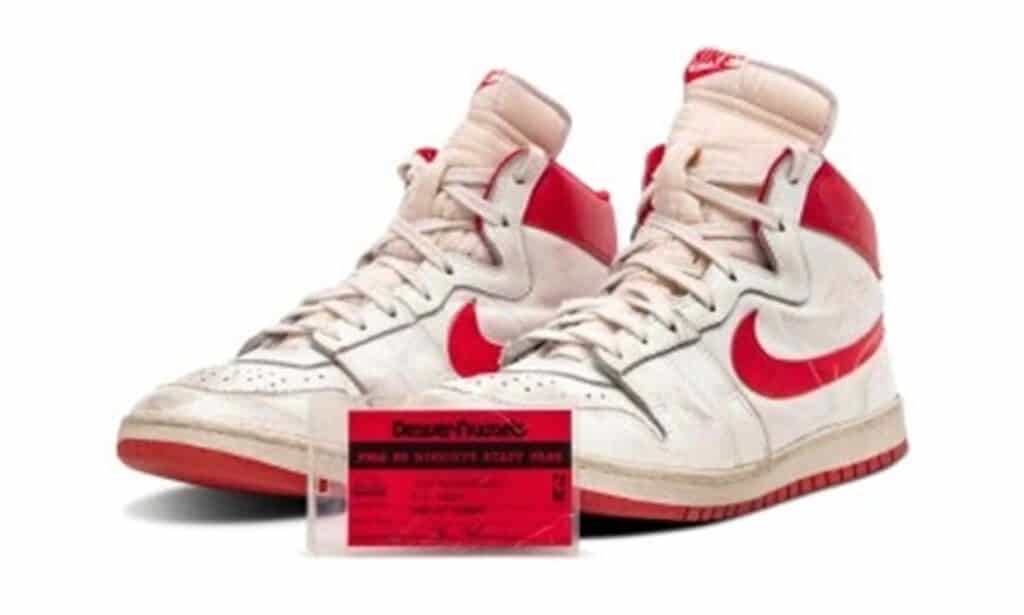 The Air Ships by Nike are arguably Nike’s most recognizable game-ready sneakers. The ones that sold for a whopping $1.472 million at a Sotheby’s auction in 2021 were worn by Michael Jordan himself at the 5th NBA game in the ’84 season.

The design of these shoes, which predates the now-iconic Air Jordan 1, is the prototype for the rest of the brand. ’84 was the year that Air Jordans first debuted, after all. The Air Ship was made by Bruce Kilgore and represents the shoes that Jordan wore his first time on the NBA court.

“Air Jordan” was coined by David Falk, Michael Jordan’s agent, for these shoes. The name is a reference to the Nike shoes’ design with air in the soles, as well as Jordan’s reputation for playing ball in the air.

These shoes were not given a full release. They were prototype samples and sold for $1.8 million. West wore them at the 2008 Grammys where he sang “Stronger” in front of a pyramid. It opened to reveal Daft Punk, who debuted a live remix of “Harder, Better, Faster, Stronger,” which they performed with West.

Air Yeezy was officially debuted in 2009. The sequel, Air Yeezy II, came out in 2012. As a collaboration with Kanye West, the Air Yeezy shoes are the first full deal between the sneaker company and a non-athlete.

Nike has been squeaking across the court for over 50 years. This list is the best of the absolute best that the brand has ever sold.