Back in 1984, Nike signed a deal with Michael Jordan to create a personalized sneaker brand, the Air Jordans. At the time, Nike was a fledgling company, which was required to put up the money for the deal as a guarantee that they were invested. Jordan, a ridiculously bankable celebrity, was doubted for the unprecedented brand deal … until the brand pulled in over $100 million in the first year alone.

Now, Air Jordans have redefined what “sneaker” even means, even beyond the realm of sports. They are the world’s most coveted sneaker line, whose shoes are now the most expensive ever sold. For this list, we’re looking at the best of the best, from shoes worn by Jordan himself at some of his most famous games to some dipped in literal gold, here are the 8 most expensive Jordans ever sold. 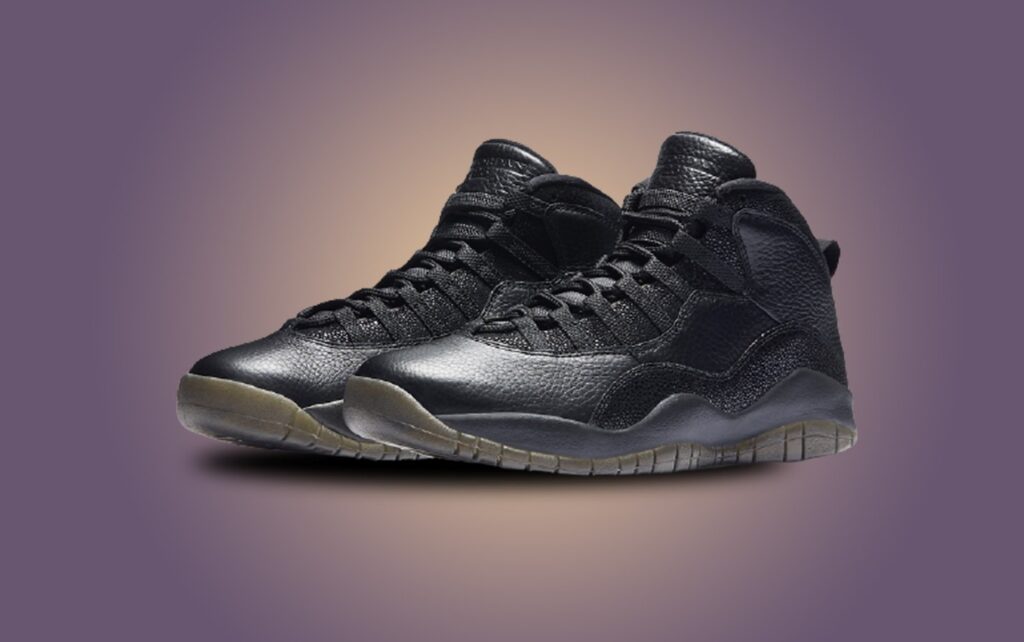 Unlike many of the Air Jordans on this list, we’re kicking off this ultra-valuable spectrum of sneakers with shoes that were not owned or worn by Michael Jordan. Instead, Canadian musician Drake supplied these Air Jordan 10 OVO sample shoes in 2014, giving them out to lucky fans straight from his private collection. It all went down at “Drake Night” during a 2014 Raptors game in Toronto.

These sneakers had never been released, so the two pairs that were given to fans were two-of-a-kind. The white pair sold for $20,000 on eBay the very next week (because of course they put them on eBay). The black pair, listed here, maxed out at $100,000 and 154 bids.

These Air Jordans were never made for a game. They were given to Drake during a concert tour as a thank you for his cross-promotion with Air Jordan. 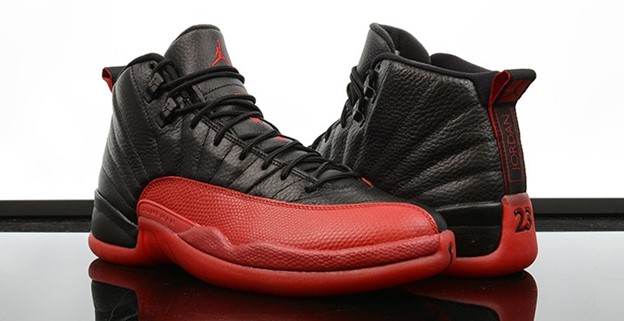 The red and black Air Jordan 12s that Jordan wore to Game 5 during the 1997 Finals are infamous in their own right for memorializing his “Flu Game.” These shoes, sold by Preston Truman, started at a price of $5,000. 15 bids later, they sold for a then-record price of $104,765.

The auction included not only the two shoes, both signed by Michael Jordan, but also the black socks he wore to the same game, if you happened to want those as well.

The Flu Game is what sports historians have called the fifth game of the 1997 NBA Finals, the Utah Jazz vs the Chicago Bulls. What Jordan later called “the most difficult thing I’ve ever done,” was the game he played with a serious bout of flu, despite his mother and coach’s warnings.

Despite his condition, he scored 38 points and 7 rebounds. According to legend, Utah Jazz coach Jerry Sloan didn’t know about Jordan’s condition, even though most people watching from home did. 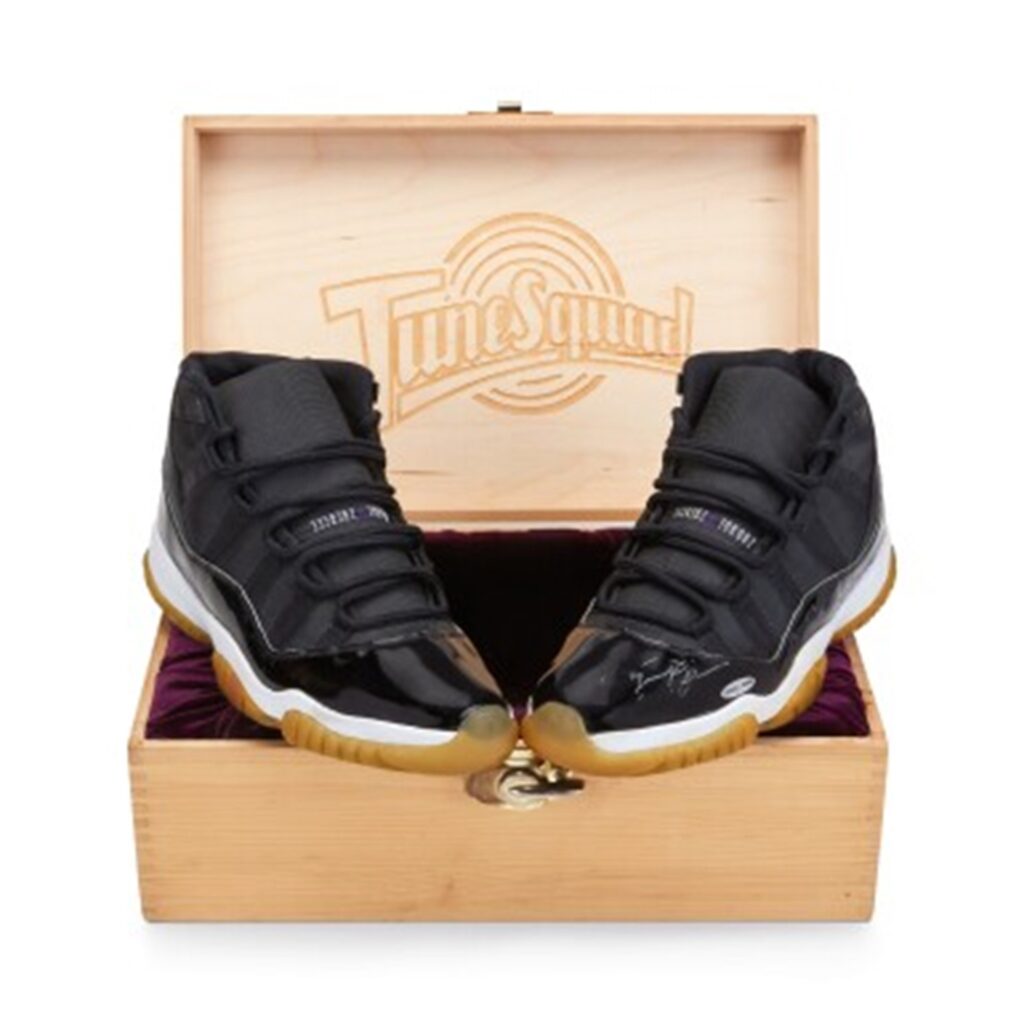 These Air Jordan 11 shoes, known as the “Space Jam Sample,” recently sold in July of 2021 for $176,400 at a Sotheby’s auction. They were identical to the shoes worn by Jordan in the 1996 Looney Tunes crossover film, Space Jam. However, this was the pair he was given but never wore. This gives them an excellent, uniquely new condition, except for Jordan’s signature in silver pen on the toe of the left shoe.

These shoes were sold in a custom-made box made of velvet and wood, inscribed with the Tune Squad logo from the film.

Michael Jordan was always itching to play, even on set. Warner Bros. obliged their primary moneymaker by building him a regulation-sized basketball court on the set of Space Jam so he could play whenever he went on break from shooting. 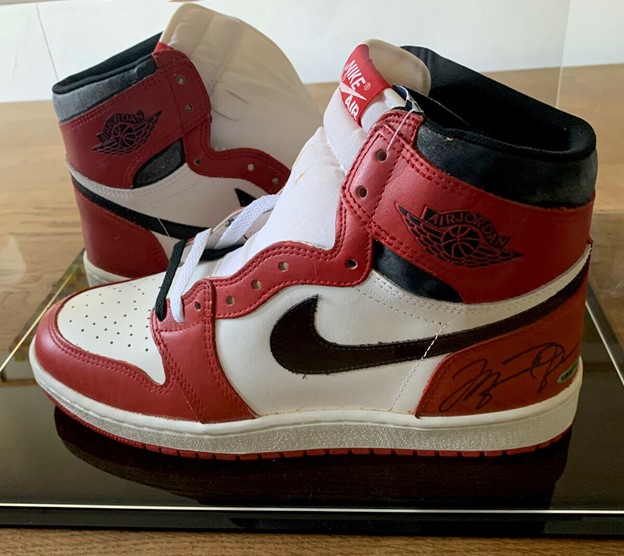 These Michael Jordan Rookie Air Jordan 1 sneakers have the distinction of being the most expensive Jordans you can currently buy. The current eBay listing has been Upper Deck authenticated to be new, never-worn shoes (they still have the hangtag) as well as being signed on the heel by Jordan himself.

These size 12 shoes are in the original Chicago Bulls color scheme and are currently up for purchase for $350,000 on eBay.

These shoes being new and signed make them a unique rarity on this list since most of these shoes are famous for being worn by famous feet. These size 12s have never been worn and wouldn’t fit Jordan anyway (who wore sizes 13 and 13.5, depending on the game). 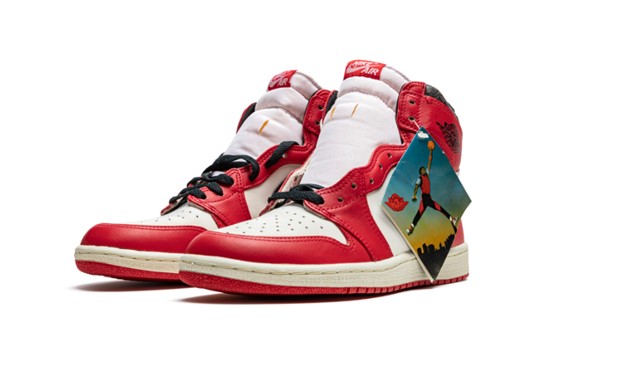 In 1985, just one year after signing the legendarily lucrative deal with Nike, Michael Jordan wore these Air Jordan 1 high sneakers in a Chicago Bulls game (exhibition). These size 13.5 shoes showed up at a Christie’s auction in New York City where they pulled in $615,000, a record-setter in Jordans at the time.

Not only were these shoes verified to be game-worn, but they were also signed by Jordan himself.

Though the Nike deal had been going on for a year, these Air Jordan 1 High “Chicago” Sneakers, designed by Peter Moore, were the shoes that changed the sneaker game forever. The full-grain leather build, Chicago Bulls colors, and midsole cushioning add up to the iconic sneaker appearance that continues to this day to define luxury sports shoe design. 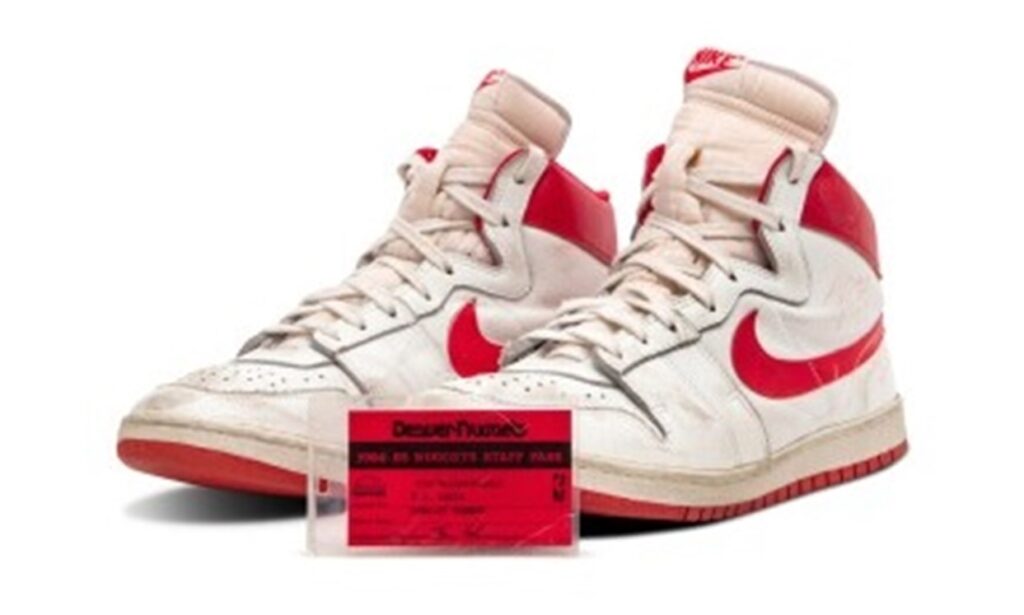 Surprisingly, these shoes at number 3 are the most expensive Air Jordans worn by Jordan himself. The Nike Air Ships that Jordan wore to a 1984 Bulls game were sold at auction in October 2021 for $1.472 million. This makes them the most expensive sneakers ever sold in an auction.

1984 marks the first year that Jordon signed with Nike to create the Air Jordans shoe line, so these Jordans are not only expensive but they’re also the most “vintage” shoes on this list.

It’s now become such common knowledge that Jordan sold Nikes that people today forget how unprecedented it was for a sports star to sign a full-time brand deal with a sneaker line. At the time of the $250,000 commitment, Nike was a small-time company – Jordan was the fame behind the deal. As a result of their incredible idea, they made $126 million the first year the Air Jordans were around. By 2019, the Air Jordan brand alone was worth $3 billion.

These Nike Air Yeezy 1s were a prototype worn by Kanye West for the 2008 Grammys where he performed. These sample sneakers ended up pulling in $1.8 million.

That 2008 performance is now a music awards legend. West sang “Stronger” in front of a neon pyramid, which opened to reveal Daft Punk in their red and blank ceremony outfits. In their Grammys debut, they pulled out a live remix of the song, “Harder, Better, Faster, Stronger” with West. 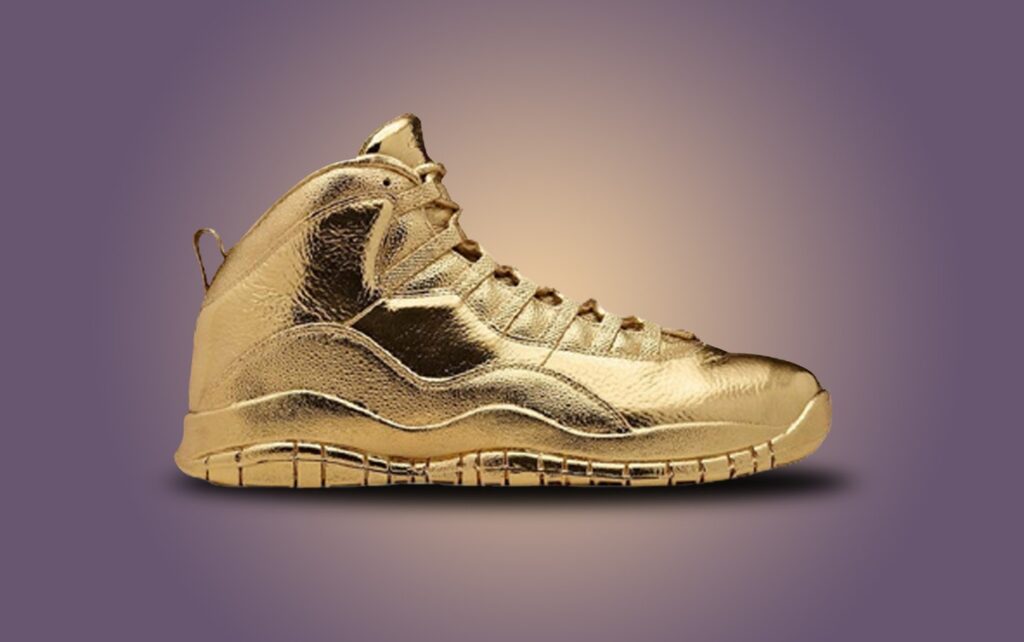 The most expensive Jordans are the Solid Gold OVO Air Jordans. OVO, Drake’s clothing line, aka “October’s Very Own,” joined with Nike to create these custom solid gold Jordans. Each shoe weighs approximately 50 pounds from all that solid 24-karat gold, designed by the artist, Matthew Senna.

Drake commissioned these shoes in 2016 and paid $2.1 million for them. Senna recreated the Air Jordan 10s for these sculptures, which had what he considered the most interesting embellishments. And no, we know what you’re thinking – you can’t wear them.

Senna has been tightlipped about how he produced the shoe sculptures, suggesting that they might have been cast or manipulated using different molds and then dipped in gold. The American artist, 31, doesn’t normally work on celebrity commission, but he loves Jordans and jumped at the chance to work with them.

Air Jordans have been destroying celebrity shoe auctions practically since they were invented. The allure not only of basketball’s most bankable star but also the Nike brand has turned a brand deal into a multi-billion-dollar brand juggernaut. Not just Nikes, not just sportswear, but sneakers as a product and as an idea are completely different because of Air Jordans. The shoes on this list are far from what most would consider affordable, but what’s a few million dollars to put your feet in the space of some of the giants of the sport?