8 Most Expensive Fighter Jets Ever

A high-tech fighter jet can make or break a nation’s air force. Command of the skies in terms of weaponry, technology, and maneuverability can end wars or maintain peace. It should be no surprise then that the most advanced fighter jets command incredible prices.

Continue reading to learn about the most expensive fighter jets, including the weapons that make them kings of the skies and the technologies that make them the aircraft of the future. 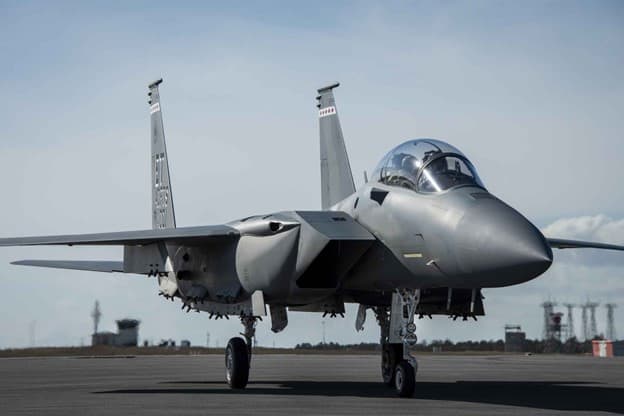 The F-15EX Strike Eagle is one of the oldest planes still in active service, starting in the United States Air Force in 1988 after being built by McConnell Douglas Boeing Defense. They’re going to be high contributors to this list as the third most high-valued defense contractor in the world.

The F-15EX is a long-range fighter jet that covers its airspace without the aid of modern electronic-warfare infrastructure. The Eagle variation is distinguished by its dark camouflage design and conformal fuel tanks.

This plane was developed for United States military operations in the Middle East, particularly Syria, Libya, Iraq, and Afghanistan. It costs $87.7 million to build.

The F-15EX Strike Eagle is a seriously useful jet fighter that is still in operation. However, it has its limitations compared to its more modern counterparts. Unlike the newer fifth-generation fighters, the Strike Eagle is anything but stealthy on modern radar detection grids.

A noisy radar signature means that this fighter will never be used again in a modern battlespace. Despite its maneuverability and tough design, this one is only for low-stakes missions at this point. 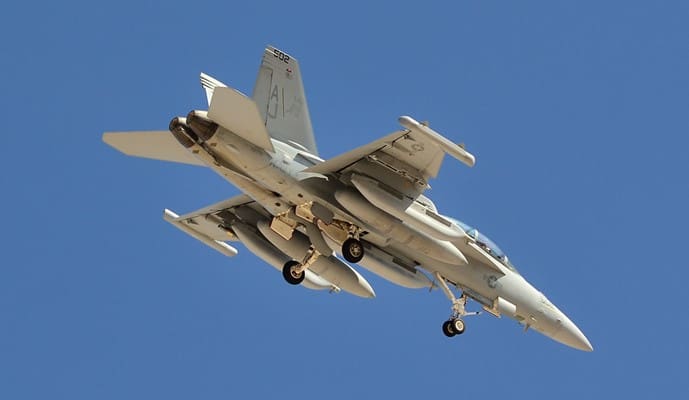 The EA-18G Growler is a modded version of the F/A-18F Super Hornet, a two-seat aircraft that Boeing Defense built for the U.S. Space & Security program back in 1995. This new version is more expensive and more advanced, souped up with what’s called “electronic warfare systems.”

This means that the plane uses systems provided by Northrop Grumman to use electromagnetic signals to control the energy spectrum in the surrounding space. When used properly, these systems can deny an enemy aircraft access to the EM spectrum in the immediate area, giving these planes the advantage in a modern combat scenario.

This plane debuted in 2006, but the manufacturer, Boeing, is over a century old, dating back to 1916 when it was founded as Pacific Aero Products Co. out of Seattle, Washington.

Today, Boeing is the third-largest defense contractor in the world behind two other American interests: Raytheon Technologies and on top, the undefeated Lockheed Martin. 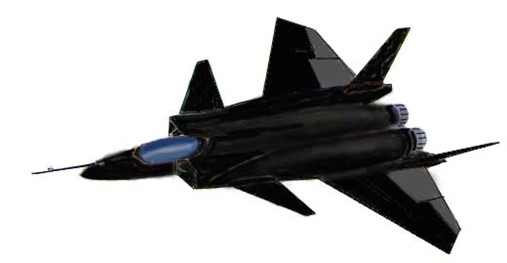 The Chengdu J-20 aircraft debuted in 2011. It is known as an all-weather stealth twinjet fighter or superiority fighter. It was manufactured by the Chengdu Aerospace Corporation for use in the People’s Liberation Army Air Force in China.

The J-XX fifth-generation fighter program in China was the beginning of this craft’s development in the 90s. Since then, the J-20 or “Mighty Dragon” as it’s sometimes called has been the staple of China’s air forces, with about 50 in service as far as we know.

An “air superiority fighter” like this one is designed so that it can steal air space from an opposing aircraft, meaning it needs to be light, fast, and extremely maneuverable. “Thrust vectoring” is a major aspect of this kind of fighter, which means the pilot can maneuver their thrusters for different directional velocities. 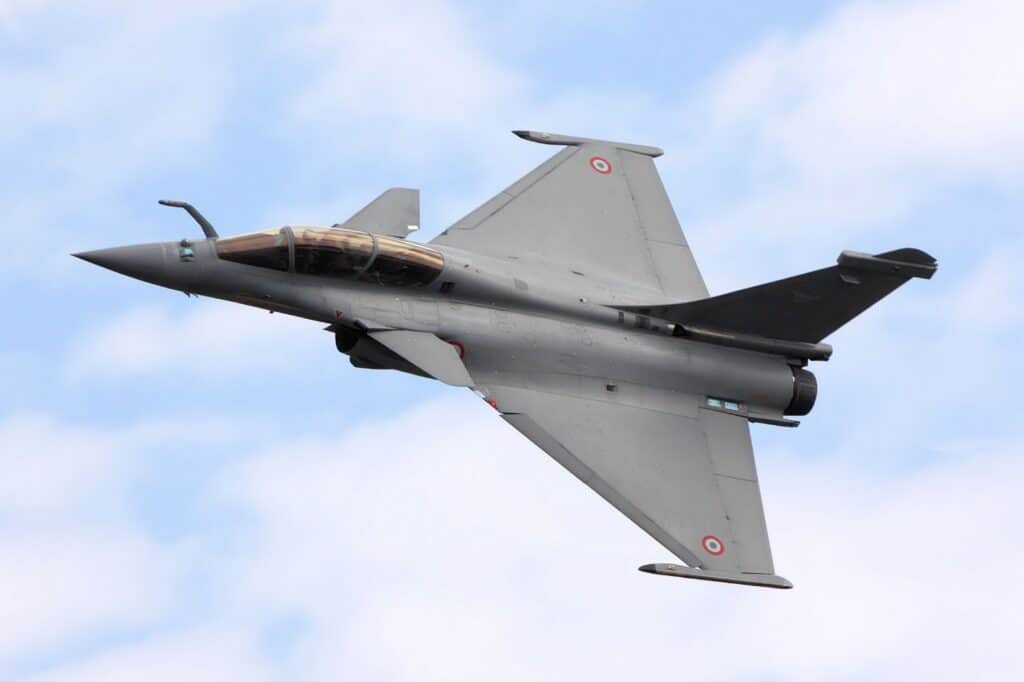 The Dassault Rafale is a French fighter jet finished in 2001, still in service in the French Air Force, Space Force, and Navy. The Indian and Qatar Emiri Air Forces also use this jet.

This jet was originally proposed as part of the Future European Fighter Aircraft program, which was a multinational coalition created to design a state-of-the-art plane for European air forces. France’s creative differences with the team led to the creation of their own jet, the Dassault Rafale.

This fighter jet costs $115 million to make and comes with such advanced features as an infra-red search and track system, integrated direct voice input, and an AESA radar, which stands for AA active electronically scanned array.

“Dassault Rafale” is a French phrase that means “gust of wind.” In reference to the plane, it refers to its rapid-fire rate. The plane that was eventually created by the Future European Fighter Aircraft program was named the Eurofighter Typhoon and will appear later this list. 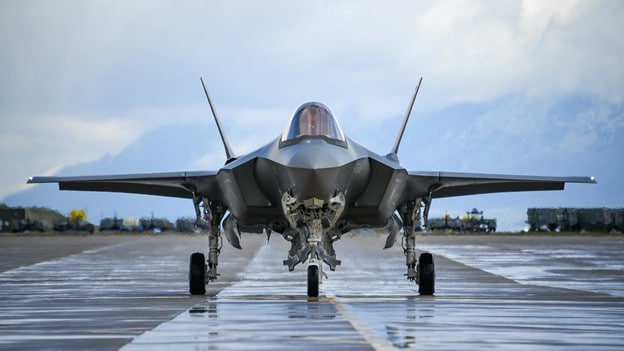 The F-35 Lightning II is the most common F-35 used in the U.S. Air Force, designed to take off and land on conventional domestic and international runways. It has a wingspan of 35 feet and a length of 51.4 feet. It can carry a weapons payload of 18,000 pounds.

This jet is well-known as a hallmark of American national security, with Lockheed Martin going overboard with its fighting capabilities. The jet includes advanced sensor and networking systems as well as a “very low” observable stealth profile.

The Joint Strike Fighter Program was formed in 1995 and began work on this now legendary fighter jet. The X-35 made its first flight in October of 2000 and by 2006 had become the F-35. 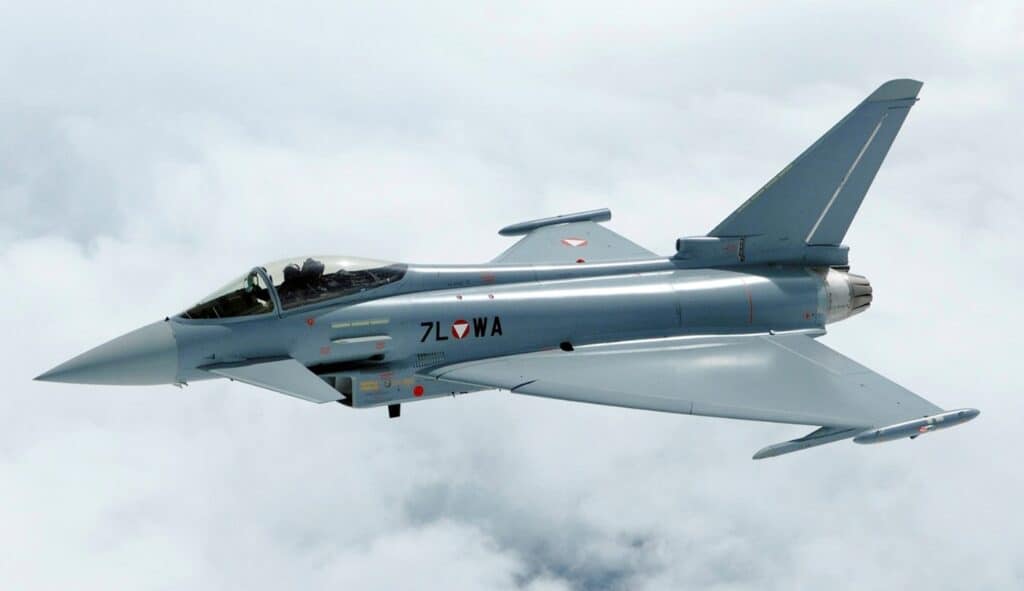 The Eurofighter Typhoon is a slightly older plane on this list, being finished back in 1994. It had been in development since 1983 through a multinational coalition of engineers known as the Future European Fighter Aircraft Programme. The group contained representatives from Italy, France, Germany, Spain, and the UK.

The craft was hurt by the drop in demand for fighters after the Cold War ended, delaying its service operation until 2003. However, since being in production, 571 Eurofighter Typhoons have taken flight for air forces in Italy, Germany, Austria, Saudi Arabia, Kuwait, and more. Each one costs around $124 million.

The jet is still in service, well-known for its proficiency in dogfighting. For the air forces that can afford one, it is known as a flagship fighter, compatible with many missile types, including Brimstone, Storm Shadow, and Marte ER. 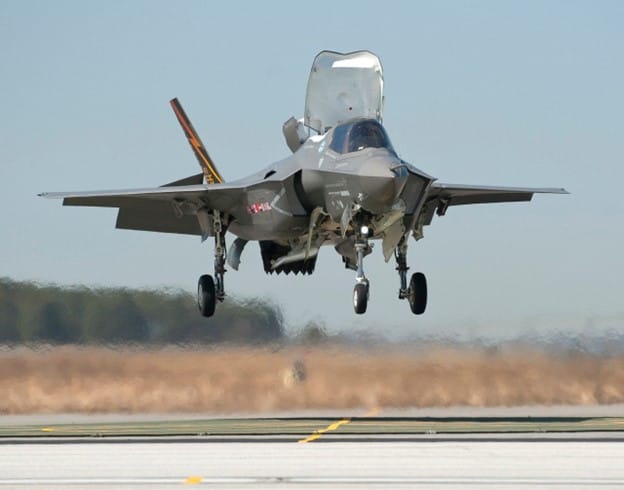 The F-35B fighter jet was designed for the Marine Corps. It’s a rare fighter jet capable of making vertical takeoffs and landings, such as on a water-born carrier. This had been an ambition of Lockheed Martin since the 1950s when the “vertical rising fighter” was a design dream that led to such infamous aircraft as the British Harrier.

The F-35-B only has one engine, but it can still put out 40,000 pounds of thrust. It broke the sound barrier in 2011, officially becoming the first vertical lander to do so. To achieve that level of versatile control and advanced weapons, building an F-35B costs around $135.8 million.

The first officially documented vertical fighter jet landing was done in the plane by a test pilot named Graham Tomlinson, who tested not only its vertical landing capacity but its supersonic speeds as well. No other plane at that time had been built with both. 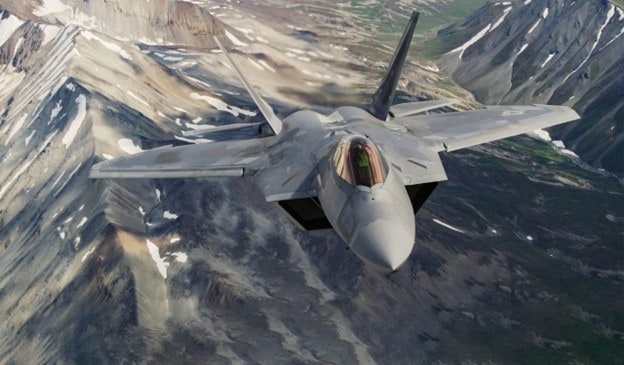 The most expensive fighter jet is the F-22 raptor. This jet by Lockheed Martin combines long-range air-to-ground weapons with a speed and control system fit for air-to-air combat, making it the king of the skies in terms of aerial combat, at least at the time of writing.

The F-22 Raptor is the materialization of the U.S. Air Force’s strategy of “Joint All-Domain Operations,” for which it needed a fighter with open systems architecture, modern digital engineering, and state-of-the-art weapons. This includes not only its flight systems but IMIS integration, which allows maintenance checks using laptop connectivity mid-flight.

The F-22 fighter jet is the most expensive in the world, costing $350 million to manufacture.

The F119 engines of the F-22 Raptor were built by Pratt & Whitney to not only be fast and powerful but to allow flight line maintenance using only the simplest tools. Six common repair tools freely available at your average hardware store are all that’s required to work on this jet.

8 Most Expensive Houses in Texas Currently (2022)

10 Most Expensive Nike Shoes Ever Sold