Louis Vuitton (named after its founder) got its start when a 16-year-old Louis began making trunks and boxes in Paris. The year was 1837, and travel was considerably more bumpy and dangerous than it is today. Carriages rocking across dirt pathways could easily leave people with damaged possessions, but not if they were privileged enough to have their items securely packed in well-made travel containers.

Lucky for Louis, the young entrepreneur proved himself to be a skilled trunk-maker. In fact, Louis was good and making trunks and good at securely packing them in carriages — and people took notice. By the year 1900, the Louis Vuitton company had more than 100 workers making Louis’s personally designed travel trunks. The company continued to grow into the 20th century, expanding beyond travel trunks to make clothing and more. 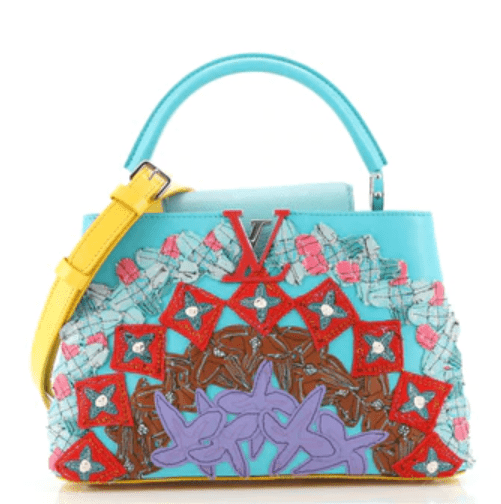 Kicking off our list is one of Louis Vuitton’s artsiest bags. The design was a collaboration between six artists and the brand, resulting in a delicate patchwork of leather. The limited-edition design features nearly 20 types of leather, including expensive lizard leather.

American artist Tschabalala Self said she considered paintings as she developed her design, “…it’s not so much the figures [of a painting that are exciting]. It’s more the deconstruction of a form and building it back up again.”

In the end, this collaborative bag is valued at about $8,000.

This bag was on view at a Louis Vuitton exhibition in Los Angeles in the Summer of 2019. 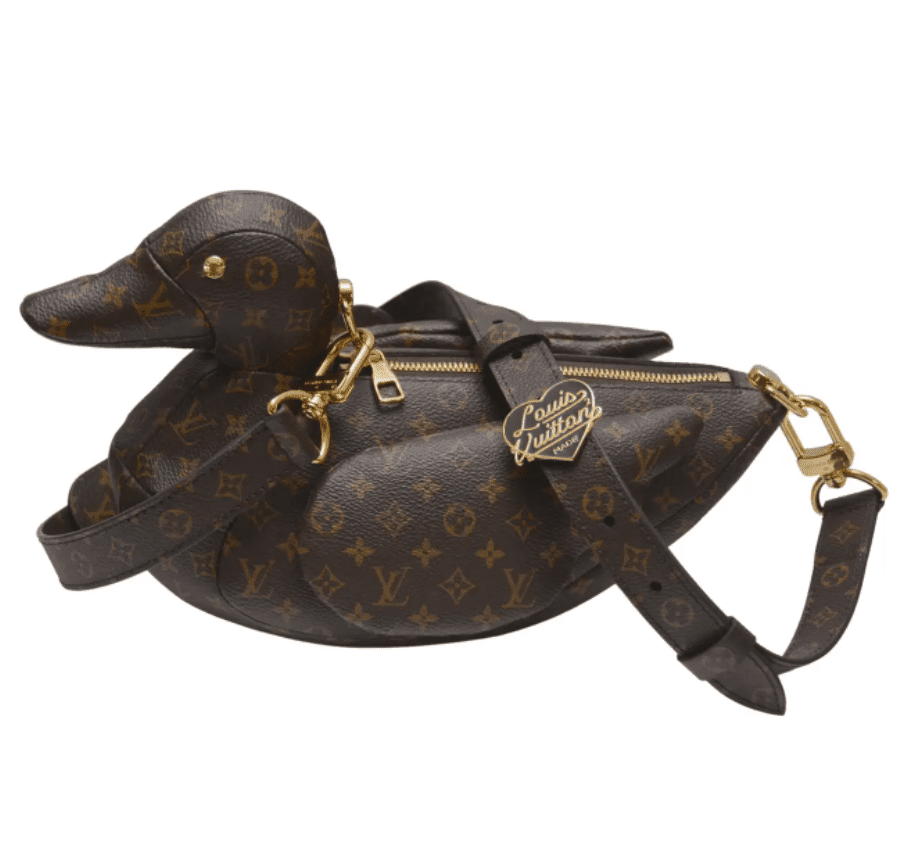 Very little is known about this limited-edition bag, but reports peg its value at more than $17,000. When it comes to NIGO and LV’s other duck-inspired products, the duck mirror clocks in at over $2,000 a pop while the pin costs a whopping $785.

Nicolas Ghesquière is the artistic director of Louis Vuitton. 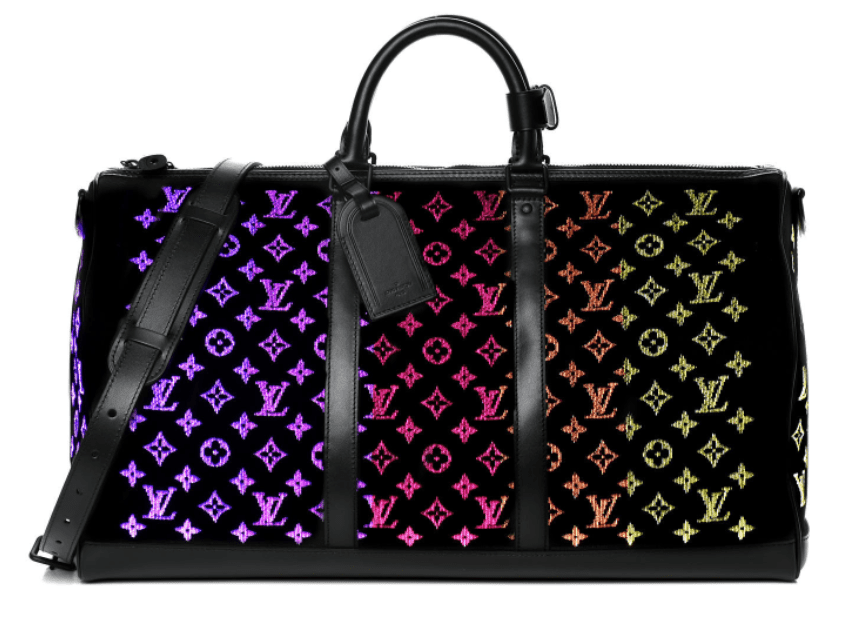 At number eight is LV’s large Monogram Jacquard Optic Fiber Woven Light Bag. The name might be a mouthful but the bag itself is pretty cool. Measuring just over 20 inches long, the design features glowing LV logos that are controlled by a smartphone app. The bag also features leather straps and a striped interior.

All said, this bag is valued at more than $28,000. The expensive design was made in 2020 and marked one of LV’s more technologically innovative creations.

In 1996, Louis Vuitton invited six designers to provide their take on the classic LV luggage set. When everything was ready, the collection was shown across the globe. 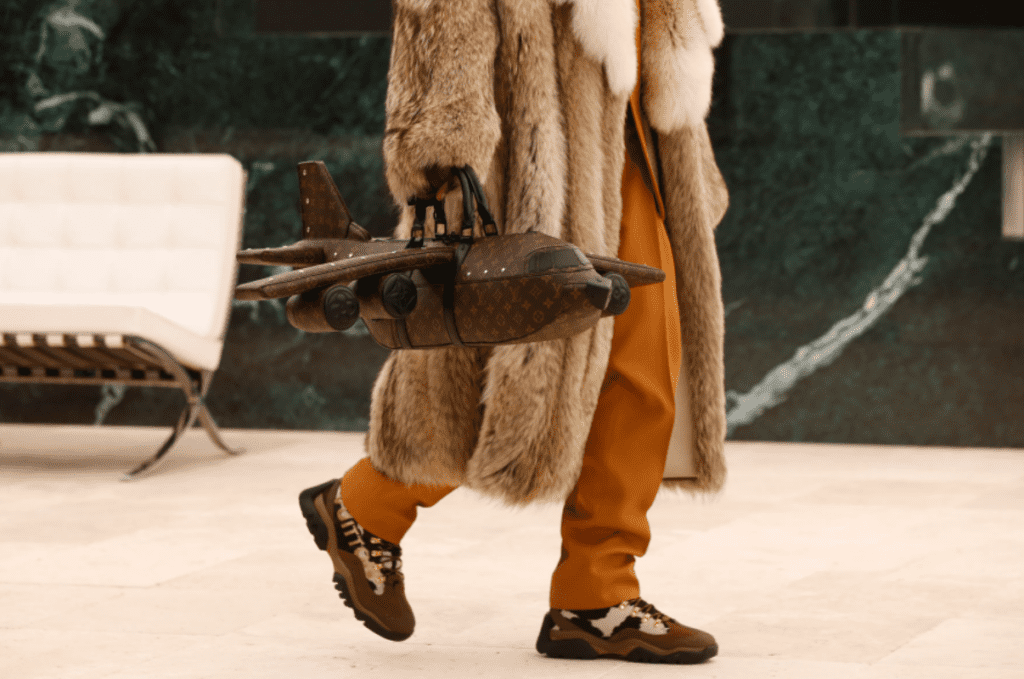 Apparently LV has a thing for bags shaped like things that fly. This time it’s a full-on airplane, complete with wings held up by “hidden metal banding” to keep them in place.

Reports of the $39,000 design popped up in 2021 after a Louis Vuitton fashion show. Some people online pointed out that you could buy a literal plane for that price — but hey, to each their own (also, if you can afford this bag there’s probably a good chance you already own a private plane).

That “literal plane” you could buy is a Cessna 150, and reports say it costs less than $20,000. So you’d actually be saving money if you purchased a real airplane instead of LV’s bag. 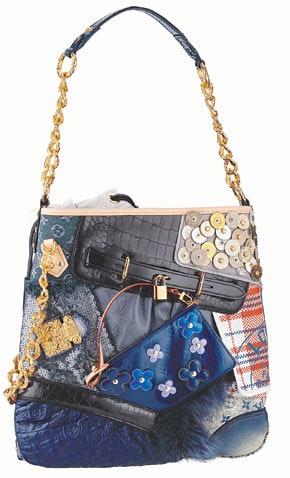 With this bag, Louis Vuitton paid tribute to several other designs. The result was a bag made of other bags — it’s a pretty interesting look. Some fashion bloggers didn’t love it though. One said, “What am I looking at? This must be a joke!” The blogger went on to call the design a “collage of every gross bag Louis Vuitton has ever produced. So yeah, not a great reception.

Reportedly, one of these limited-edition bags was purchased by none other than Beyoncé. 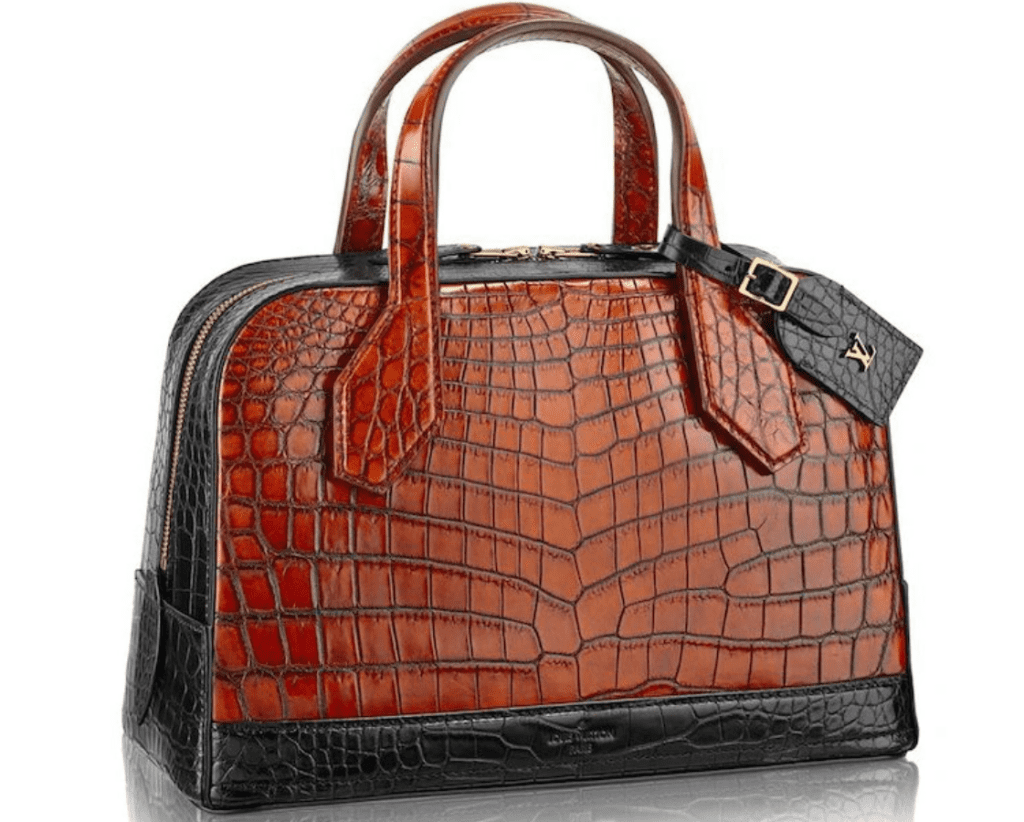 Info about Louis Vuitton’s Crocodile Lady Bag PM is limited, but we know the pricey design costs a whopping $54,500. That sky-high price tag is a reflection of the bag’s main material: crocodile leather.

Croc leather is pricey because of its complex production process and various regulations on the material. Believe it or not, it’s pretty common to see products made of croc leather sell for thousands of dollars.

Interestingly, this bag doesn’t feature very many LV logos compared to most of the brand’s bags. While other bags feature LV printed all over the place, the main focus of this design is all that pricey leather. 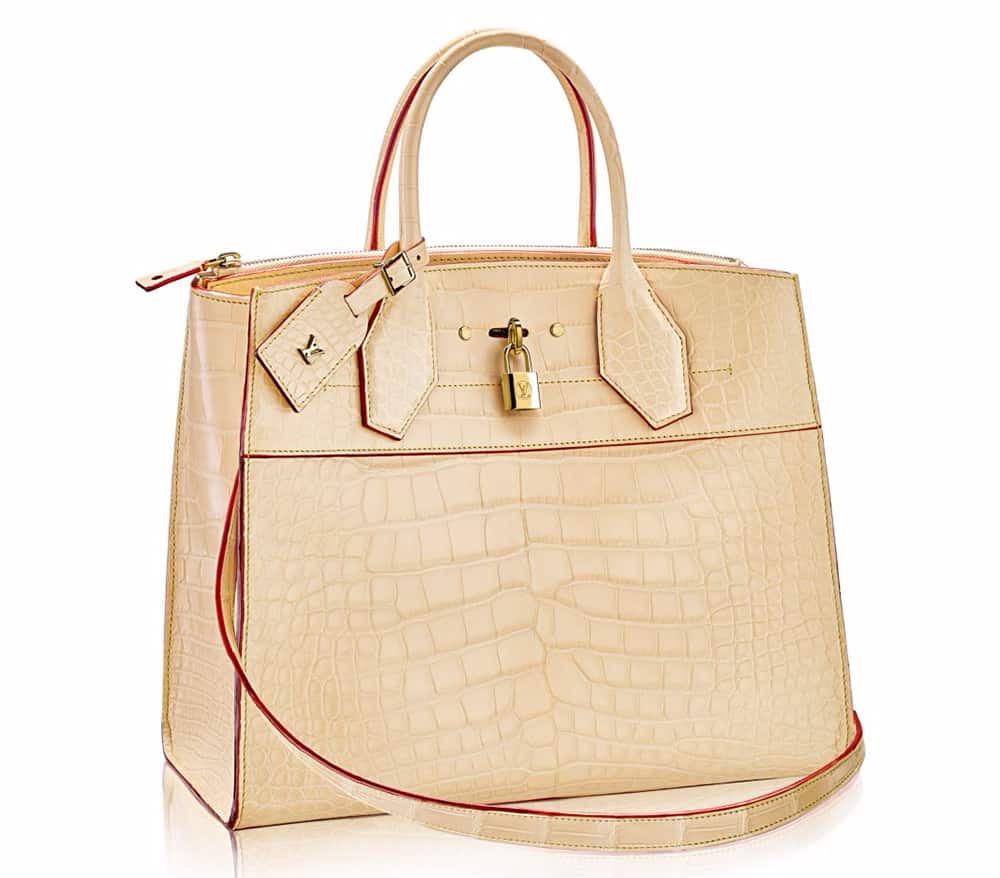 Up next is LV’s croc leather City Streamer bag. The pricey design costs more than $55,000 and is styled after the brand’s standard City Streamer, a slightly more simple design that you can snag for under $2,000.

Nicolas Ghesquière, the artistic director of Louis Vuitton, started his work with the brand in 2013. Before that, Ghesquière was the creative director of Balenciaga. Ghesquière is considered one of the most innovative fashion designers of his generation. 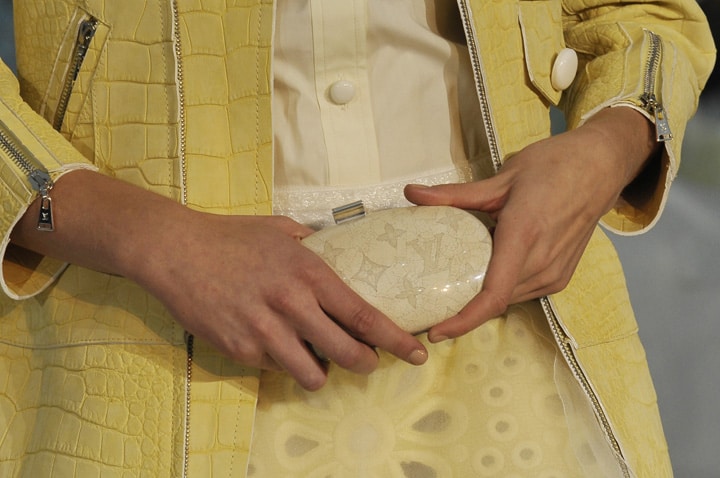 Heading into the top three we’ve got this small design featuring a glossy finish. The unique creation has a subtle look, but the design stands out with its use of materials. According to Louis Vuitton, the piece was crafted using 12,500 pieces of eggshell!

Estimates say Coquille d’Oeuf Minaudière is worth just over $100,000, making it the third-most-expensive Louis Vuitton bag on the planet.

This piece was part of the Louis Vuitton SS12 ready-to-wear show. Vogue described this bag as “an eggshell lacquer bag made with the assistance of the last man in Paris still in command of the 1920’s technique,” referring to the unique method of turning eggshells into a clutch. 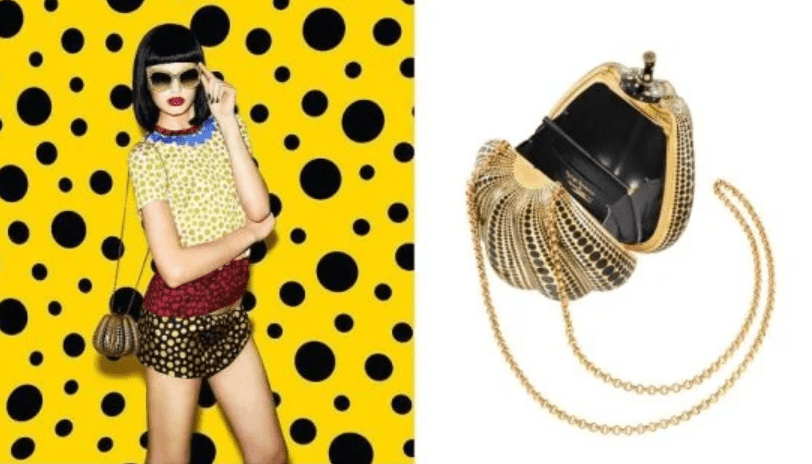 At number two is Yayoi Kusama’s LV bag. Kusama is a visual artist known for her dizzying, psychedelic work that often uses a lot of dots. According to Tate, an art institution, “Yayoi…had a hallucination that freaked her out [as a kid]. She was in a field of flowers when they all started talking to her! The heads of flowers were like dots that went on as far as she could see…This weird experience influenced most of her later work.”

Valued at more than $130,000, Kusama’s bag is the second-most expensive LV bag ever made.

Yayoi Kusama compared her use of dots to the entire universe, saying, “Our earth is only one polka dot among a million stars in the cosmos.” 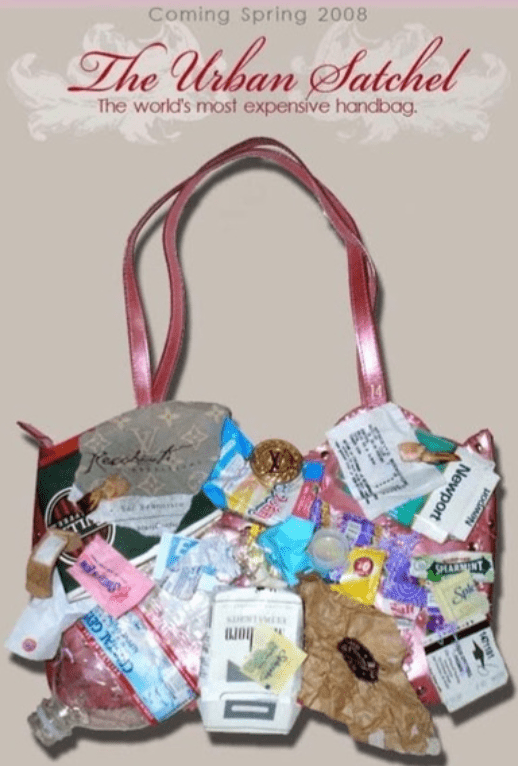 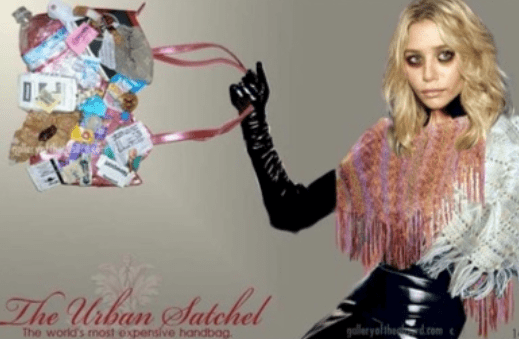 The Urban Satchel is the most expensive Louis Vuitton Bag ever made.

Valued at a whopping $150,000, LV’s strange Urban Satchel is easily the most expensive bag the brand has ever made. The bag is reportedly made of real garbage, although it’s unclear if LV literally sourced materials from a dumpster.

The Urban Satchel was part of a multi-million-dollar ad contract involving Ashely Olsen around the year 2008. Reports from the time say Ashely and her twin were fighting over who got to keep the bag after photoshoots while fashion icons Anna Wintour and Victoria Beckham “started a nasty bidding war” for rights to the unique creation.

This bag features everything from old cigarette packs to a crumpled receipt and a water bottle.