10 Most Expensive Pokémon Trainer Cards Ever

After more than 20 years of trading cards, the market for Pokémon remains alive and thriving. It is one of the most popular games among children, millennials, and adults. The trading card game continues to thrive because it provides a unique blend of strategy and luck.

Players must think strategically to win while relying on a chance with the random draw of cards. Besides collecting rare Pokémon card items, trainer cards are also some of the sought-after for many collectors. This article discusses some of the most expensive Pokémon trainer cards available based on their average market price. 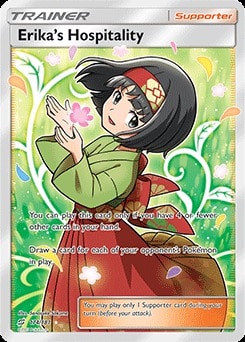 The supporter card Erika’s Hospitality is used. It debuted as a component of the Team Up expansion. Erika teaches flower arranging and is ladylike. Although she is a shy girl, Celadon City is well aware of her.

If you have fewer than five cards in your hand, Erika’s Hospitality enables you to draw a card for each of your opponent’s Pokemon that are currently in play. Erika’s Hospitality is a helpful draw card suitable for various decks in addition to looking fantastic.

Erika is the gym leader of Celadon City. 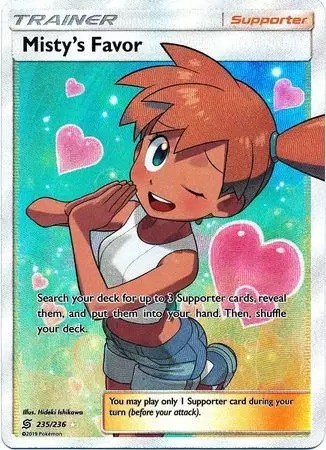 Another Gym Leader from Kanto, Misty, made her anime debut alongside Ash Ketchum in episode 1, making her one of the most recognizable Pokémon trainers ever.

Misty, a Water Pokémon-based ally, hangs around with Ash for several seasons and a few films due to a Pikachu-related incident until she finally returns to her gym while Ash travels to other areas.

Misty was one of the key voices in the show, explaining to the audience the laws of the Pokémon world, fighting, and everything Pokémon so that youngsters would understand what was going on. When Misty ultimately departed the program to make way for other characters to develop, it was a tremendously emotional occasion for viewers who grew up watching during this period.

Misty is depicted in her form as she appeared in the Let’s Go! games, but she still exudes the charisma she used to attempt to acquire what she wanted during the program. 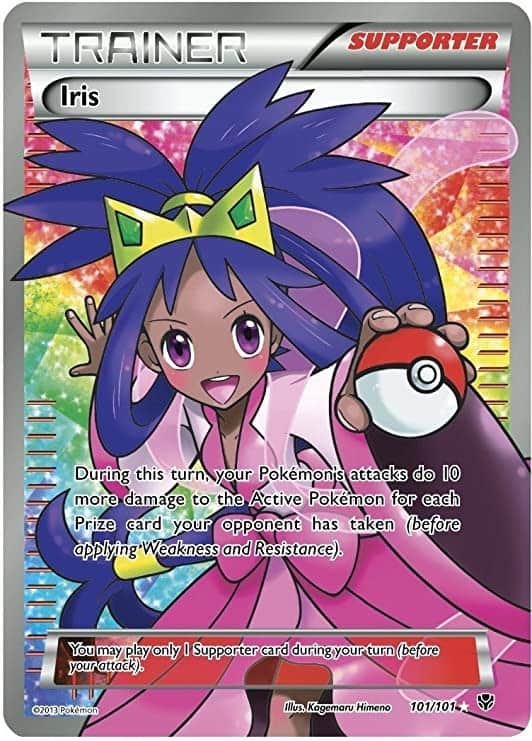 Due to the age of the sets they come from, the Black & White characters were among the first Pokémon cards to have full-art renderings, making them some of the most costly cards. Iris is not just difficult to find but also a very popular Pokémon trainer from the Black & White games and the animated series when she accompanied Ash Ketchum.

Iris is a beloved character among players who were only printed once in Plasma Blast. Considering how costly the sealed boosters of the set have grown, it is nearly hard to get her card in the wilds.

Iris is a Dragon-type Pokemon trainer, a Gym Leader, and a traveling companion. 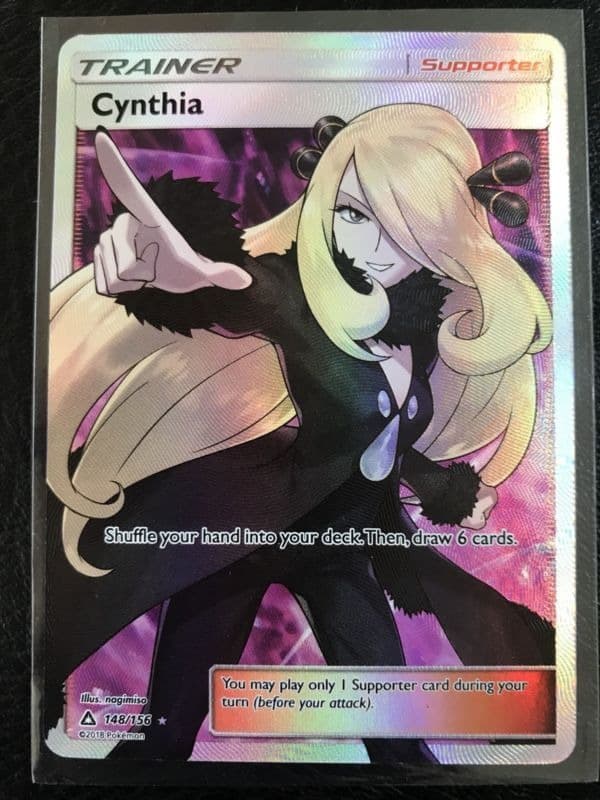 Few trainers of Pokémon are still as well-liked as Cynthia. The Diamond and Pearl games are the final set of monster-catching games before a significant chunk of the community split off.

These games were revised and re-released in 2021 as Brilliant Diamond and Shining Pearl, allowing a brand-new generation of Pokémon lovers to compete against Cynthia. Despite several printings, including FIVE more full-art cards featuring Cynthia, the original is still the most challenging to get.

You may get the Hidden Fates edition for a little less if you prefer a full-art version but don’t want to spend a fortune. 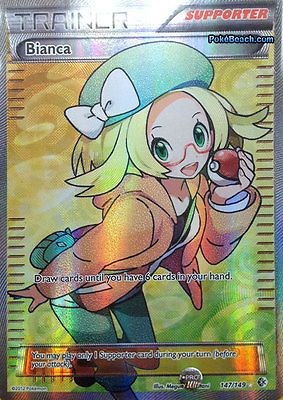 Bianca is a different player-versus-character from the Black & White video games who also acquires a starting Pokémon with the player at the game’s start. Bianca decides to seek a career as a Pokémon professor during the game, and in the Black 2 and White 2 sequels, she even works as Professor Juniper’s assistant.

The Pokémon trainers of the Black & White generation seem more convincing because of the game’s overall serious tone.

Bianca seems like a more fully developed antagonist than some of her predecessors. She plays a significant role in Ash’s adventure during the Black & White era, even though much of this is missing from the animated series.

Bianca is also a skilled trainer, as seen by her clashes with Emboar. 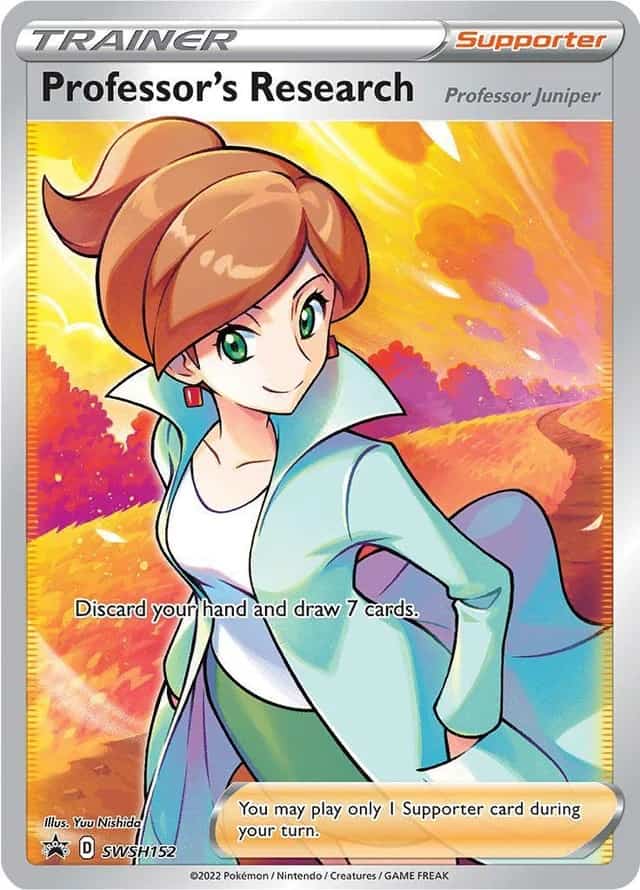 Depending on the generation of Pokémon video games they started with, every Pokémon fan has a favorite Pokémon Professor. If you began playing in the Unova-set Black & White generation, you might recall Professor Juniper handing you your first Pokémon and starting your adventure.

For viewers who weren’t familiar with the earlier episodes of the Pokémon, Professor Juniper adopted a less comic approach to serving as the guide to the Unova area. Professor Juniper has a unique place in the fanbase’s hearts because she shows younger followers that anybody can become Pokémon Professor. 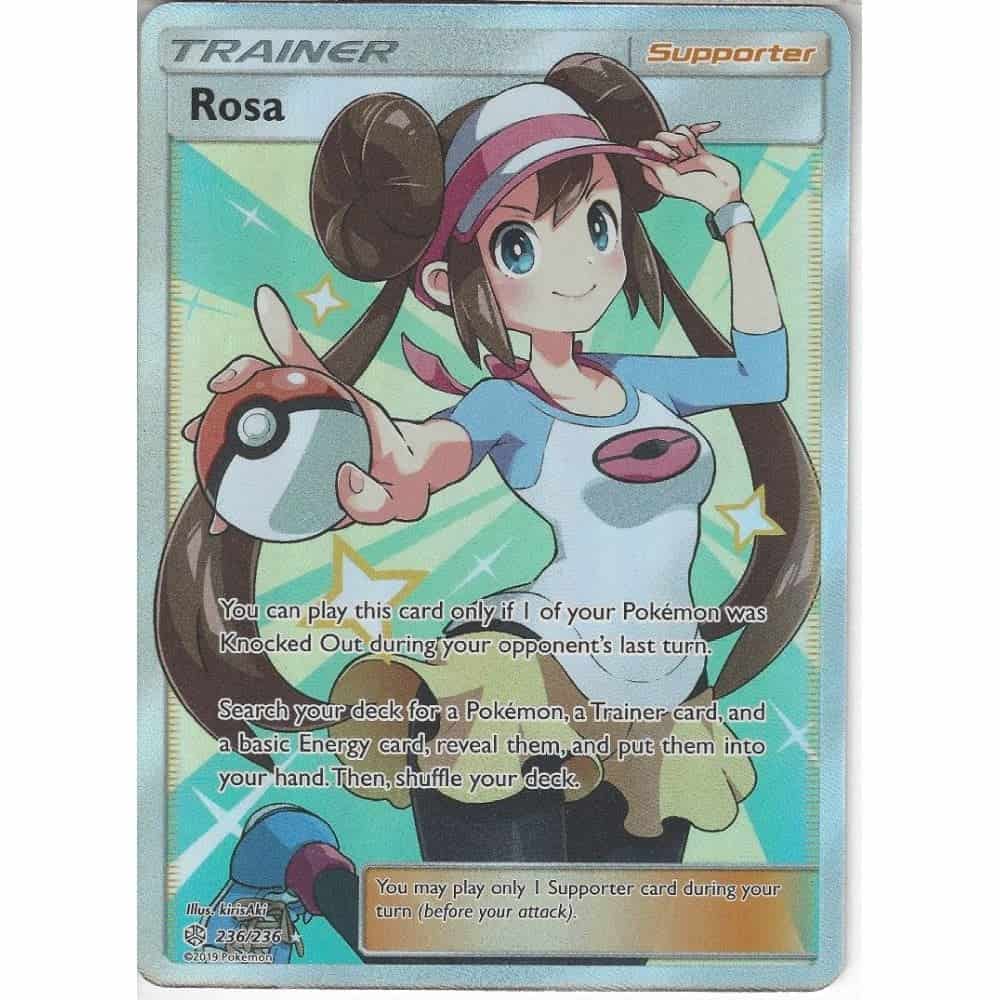 Much ground was broken for the Pokémon series with the fifth generation of video games. Black 2 and White 2 were two different games that served as the generation’s new plot following the conclusion of the previous games, Black and White, rather than having just one “final” game. These new games have passed a few years; thus, fresh protagonists were required.

Rosa fills that role. Despite the audience’s divided views on Black 2 and White 2, she was a big hit, which remained true despite their new Pokémon trainers’ popularity. The last collection for the Sun and Moon generation, Cosmic Eclipse, had many thrilling cards for players.

Players and collectors loved the full-art trainers from this set, which were very challenging to open from booster packs. As players searched for them, this increased their rarity, and even after the supply of these cards ran out, demand for them remained high. 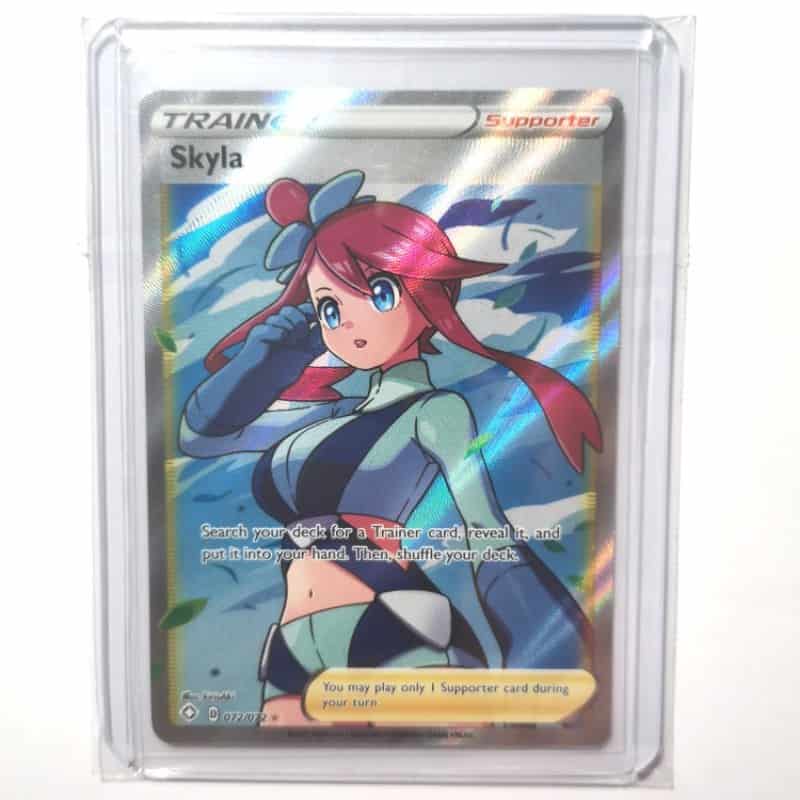 One of the few Black & White period figures, Skyla is still quite pricey and has received several full-art variants. In the sequels, Skyla continues to serve as the Flying-type Pokémon-focused Gym Leader for Mistralton City in the Unova region.

Skyla is a crowd favorite because of her visual style. Her Pokémon TCG card has appeared in several sets due to her relatively straightforward utility, despite your little encounters with her in the games.

Skyla may be printed in almost every set to enhance gameplay by having a card with simple text, which is one of the reasons why she has already had three full-art versions. 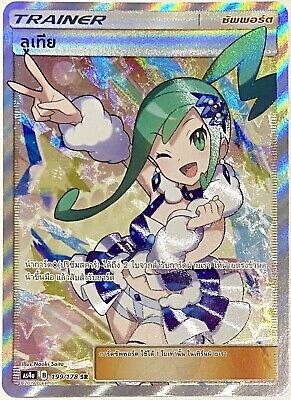 Lisia, a Pokémon manager from the Omega Ruby and Alpha Sapphire video games, is the player’s introduction to Pokémon Contests so they may participate in one of the more intriguing side games first presented in the Pokémon series.

Pokémon Contests, a truly fascinating mini-game that provided an exciting option to interact with your Pokémon without needing to engage in combat in the classic Ruby and Sapphire games, was improved upon in the remakes to provide a wholehearted mode that you may play.

Omega Ruby and Alpha Sapphire, which are remakes of the Ruby and Sapphire games, are probably among the finest games in the whole series, and the characters from those games have become quite well-known.

The cost of this entire painting is second only to Rainbow Rare Rayquaza-GX in the Celestial Storm collection, and depending on the day, it may even be more expensive than the fabled dragon.

Lisia is a coordinator who — like other coordinators — has a design that is designed to resemble the Pokémon she utilizes, Altaria. She is also a fantasy character who is well-liked by gamers. 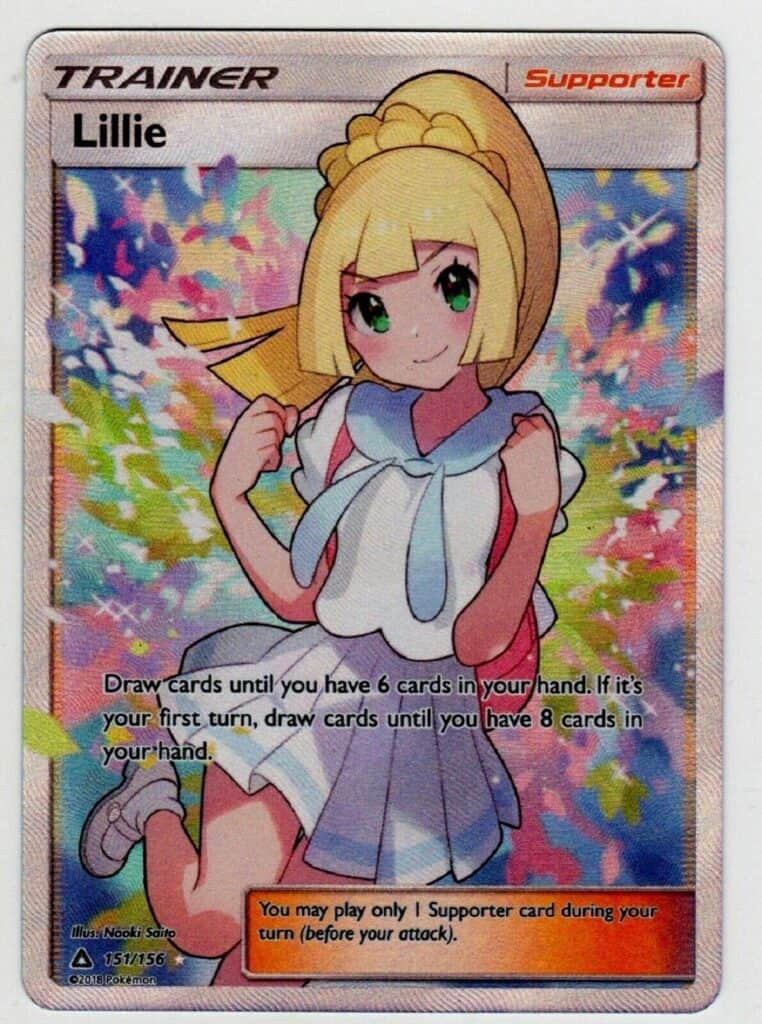 Considered the most expensive trainer pokemon in the market, Lillie can be bought at a whopping price of $261.

Lillie spends most of the gameplay focused on her objective of defending her buddy Cosmog from the Aether Foundation, in contrast to earlier games in the series where your enemies and friends are always combating you to demonstrate who is the strongest.

Lillie rapidly establishes herself as not just the genuine heroine of these games and also one of the most catchphrase characters in the Pokémon franchise through her fight to protect Cosmog from harm. It is a wonderful tale to follow as you are busy destroying Totem Pokémon. It’s interesting to see that Lillie isn’t a very potent card.

She continues drawing cards until you have six, or eight if it’s your turn, in your hand. Considering that it was released in 2018, it is also a rather recent card. Ultimately, Lillie shows what character connection and well-drawn card art can do for money.

The Sun & Moon games allow you to be part of the plot as Lillie looks over Cosmog and strives to defend it from those who would hurt it for power, unlike most Pokémon games where the player observes as the tale unfolds to them.

12 Most Expensive Marvel Comic Books Ever