10 Most Expensive and Valuable Pokémon Cards Ever

Pokémon was created in 1995 and it made the multi-media franchise debuted in Japan in 1996 with the release of the Pocket Monsters: Red and Green Game Boy game. The Pokémon Trading Card Game (TCG) followed up the success of the video game in 1997. As Pokémon became increasingly popular in Japan, Americans and the rest of the world were itching to get in on the action. English versions of the Game Boy game were released in North America in 1998 and the TCG followed in 1999. Since then, Pokémon has taken the world by storm and over 20 years later, the video games, cards, and animated series are as popular as ever.

Due to the popularity of Pokémon, the cards are some of the most collected items in the entire franchise. Like with any trading cards, some Pokémon cards are rarer than others. For the most part, the rarest Pokémon cards were limited edition prizes, errors, or only given to employees.

Please note that this list was arranged by the number of copies available and not by value. As of May 2021, the information on this list is as accurate as possible and will be updated as needed.

Estimated Number of Copies Available: 1,000 or less
Reason for Rarity: Given to top students enrolled in the fictional Shogakukan Celadon University
Current Value (Based on Highest Price Paid for a Copy): $66,100
Year Released: 1998 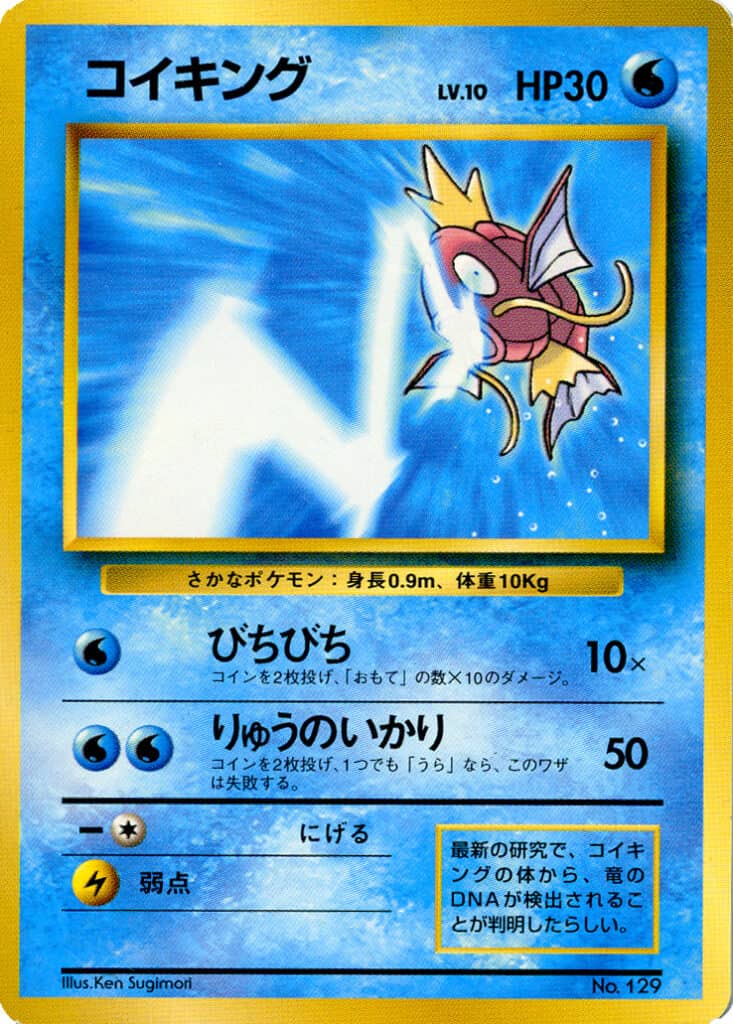 While Magikarp may be a rather unremarkable Pokémon, this floppy fish holds a special place in the hearts of Pokémon fans everywhere. In 1998, a special “University Magikarp” was given out to the top 1,000 students enrolled in the Shogakukan Celadon University campaign. The promotion was available through issues of Japanese school magazines and participants had pass an Entrance Exam to become a Celadon University student. Three more tests were published in later issues and students were required to mail their answers to Shogakukan, which then graded and ranked the students.

In addition to the University Magikarp cards, 20 players who participated in the “Celadon University Hyper Test” published by Shogakukan were given a special Magikarp that knew the move Dragon Rage to use in a Japanese Pokémon video game.

Estimated Number of Copies Available: 54
Reason for Rarity: Only given to certain Pokémon Daisuki Club members
Current Value (Based on Highest Price Paid for a Copy): $30,100
Year Released: 2010 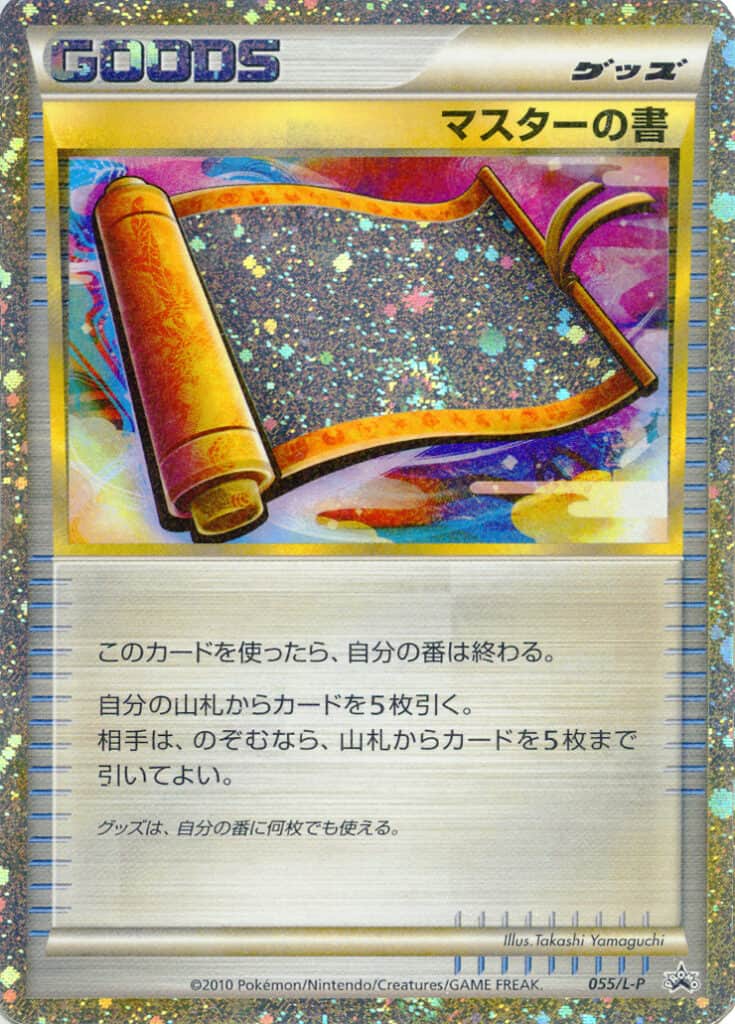 Master’s Scroll is another rare Japanese Pokémon card that doesn’t come up for sale very often. This promotional card was given out in 2010 as a Master Rank prize to members of the Pokémon Daisuki Club. To reach Master Rank, members had to accumulate 8,600 Action Points, through various tasks. No one knows for sure how many club members chose to trade in their points for the Master’s Scroll, but PSA has graded about 54 of these limited edition cards.

The Pokémon Daisuki Club is the official Japanese Pokémon fan club and limited edition cards are regularly offered to members.

Estimated Number of Copies Available: 54
Reason for Rarity: Hard to keep cards in mint condition after several decades
Current Value (Based on Highest Price Paid for a Copy): $369,000
Year Released: 1999 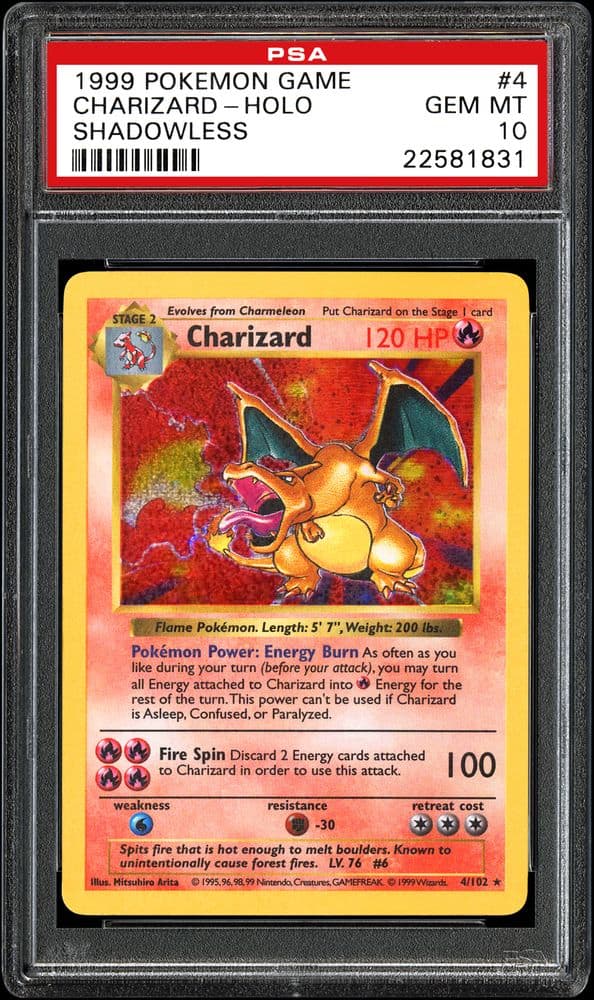 In October 2020, the rapper Logic made news headlines for snagging a 1st Edition Shadowless Holographic Charizard in mint condition for the bargain price of $220,574.

Estimated Number of Copies Available: 45
Reason for Rarity: Only given out to winning teams at Parent/Child Mega Battle tournament
Current Value (Based on Highest Price Paid for a Copy): $150,000
Year Released: 1998 Like most of the rarest Pokémon cards, the special Kangaskhan given out to the winning teams at the Parent/Child Mega Battle tournament in 1998 was never released to the general public. There isn’t any information on how many of these limited edition Kangaskhan cards were given out, but PSA has authenticated about 45 of these cards in various conditions. Any time a Family Event Kangaskhan has come up for sale, it has fetched a few thousand dollars. In October 2020, on mint condition Kangaskhan was sold for $150,000, making this special Kangaskhan one of the most valuable Pokémon cards out there.

The Parent/Child Mega Battle tournament Kangaskhan is one of the few promotional cards that features the original Japanese Pocket Monsters Trading Card Game logo as a set symbol.

Estimated Number of Copies Available: 41
Reason for Rarity: Only given to winners of CoroCoro Comic illustration contest
Current Value (Based on Highest Price Paid for a Copy): $375,000
Year Released: 1997 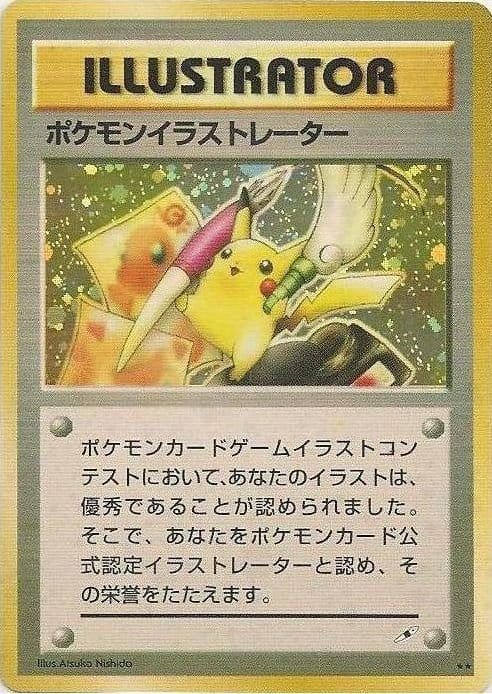 Pikachu is the de facto mascot of the entire Pokémon franchise, so it only makes sense that the rare Pikachu Illustrator is one of the most sought after Pokémon cards for any collector. Pikachu Illustrator was given out to winners of CoroCoro Comics‘ Pokémon Card Game Illust Artist Contest in 1997.

For many decades, only 39 Pikachu Illustrator cards were available, but in 2020, two additional Pikachu Illustrators were put up for auction by Yuichi Konno, one of the four people involved in creating the rules for the trading card game.

Estimated Number of Copies Available: 36
Reason for Rarity: Only given to 2010 Japan World Championship competitors
Current Value (Based on Highest Price Paid for a Copy): $21,201
Year Released: 2010 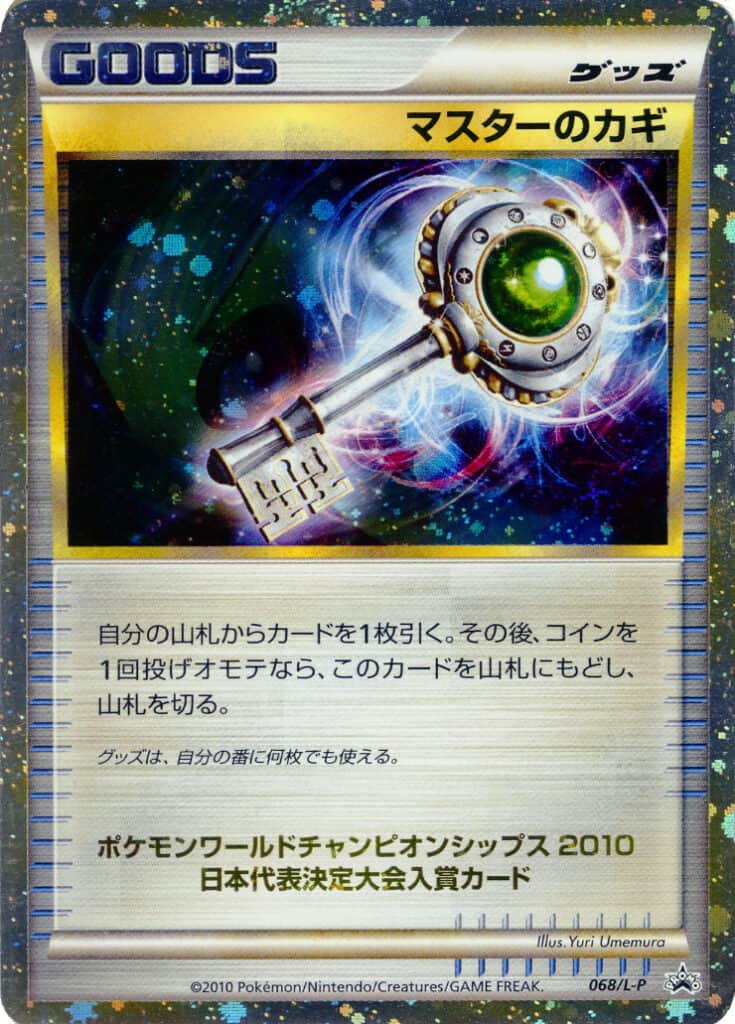 The Master’s Key is another limited edition card that was only given to participants of a specific tournament. The special card was awarded to all competitors from each age division at the 2010 Japan World Championship. The Master’s Key was also given to all the competitors from each category in the Video Game event at the tournament, something that had never been done before.

Based on the tournament results, 36 Master’s Key cards were given out, but very few have come up for sale or been inspected by PSA for grading and authentication. One Master’s Key in its original trophy case was sold in 2019 for about $21,201.

Estimated Number of Copies Available: 8 to 10
Reason for Rarity: Error print given out to Wizards of Coast employees
Current Value (Based on Highest Price Paid for a Copy): N/A
Year Released: 1999 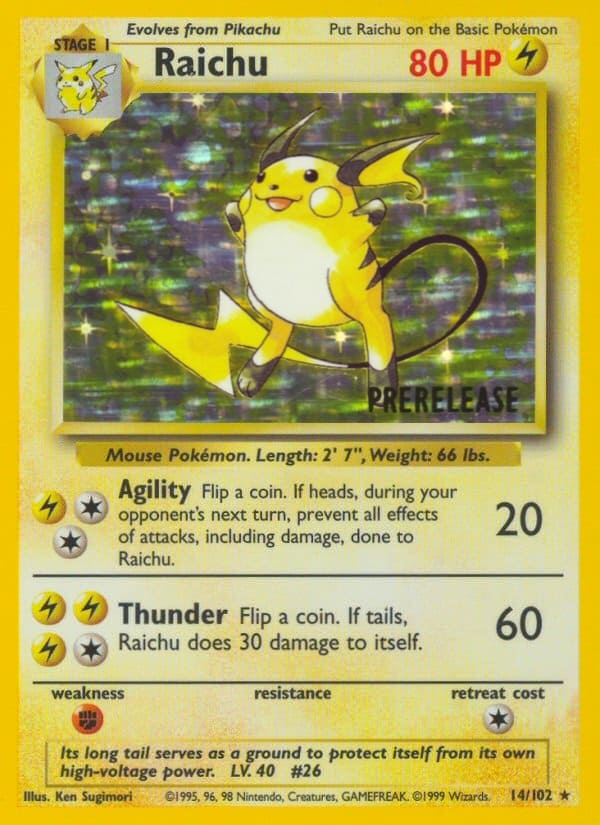 The next rare Pokémon card on this list is shrouded in mystery and its existence has yet to be confirmed by professional sources. For many years the Pokémon fan community had heard rumors of a Base Set Raichu stamped with the word “PRERELEASE” on it. This error card was reportedly given to Wizards of the Coast employees, but for years no one had seen concrete evidence that this Prerelease Raichu even existed. Then in 2006, a legitimate former Wizards of the Coast employee uploaded a picture of the card to the internet. However, none of these Prerelease Raichu cards have come up for sale or have been turned over to a professional card grading service for authentication. If the Prerelease Raichu card is real, then it would likely be the most valuable Pokémon due to the sheer impossibility of ever obtaining a copy.

Wizards of the Coast card sheets were cut into 8”x11” sheets, which means that there may be 8 to 10 Prerelease Raichu cards out there.

Estimated Number of Copies Available: 7
Reason for Rarity: Only given to regional champions at Pokémon Super Secret Battle
Current Value (Based on Highest Price Paid for a Copy): $90,000
Year Released: 1999 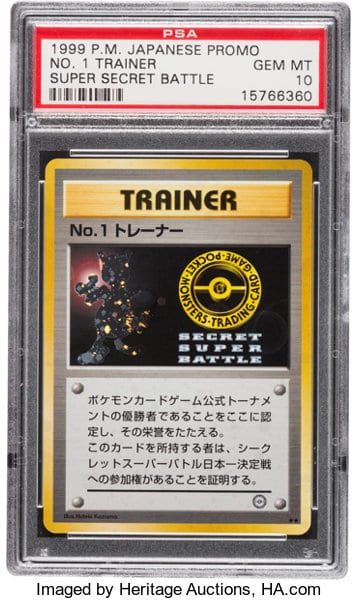 The Pokémon Super Secret Battle “No. 1 Trainer” Holographic Promo Card is considered by many Pokémon fanatics to be the Holy Grail of the Pokémon Trading Card Game. Only one of the No. 1 Trainer cards was given to each of the seven regional champions at the 1999 Pokémon World Championships. The winning prize card was the champions’ ticket into the final tournament, dubbed the “Super Secret Battle”. The location of the final battle was only revealed to the regional champions when they received their No. 1 Trainer card.

The artwork for the No. 1 Trainer card was designed by Hideki Kazama and features a silhouette of Mewtwo.

Estimated Number of Copies Available: 5
Reason for Rarity: Prize given out to top competitors at Tropical Mega Battle
Current Value (Based on Highest Price Paid for a Copy): $50,300
Year Released: 1999 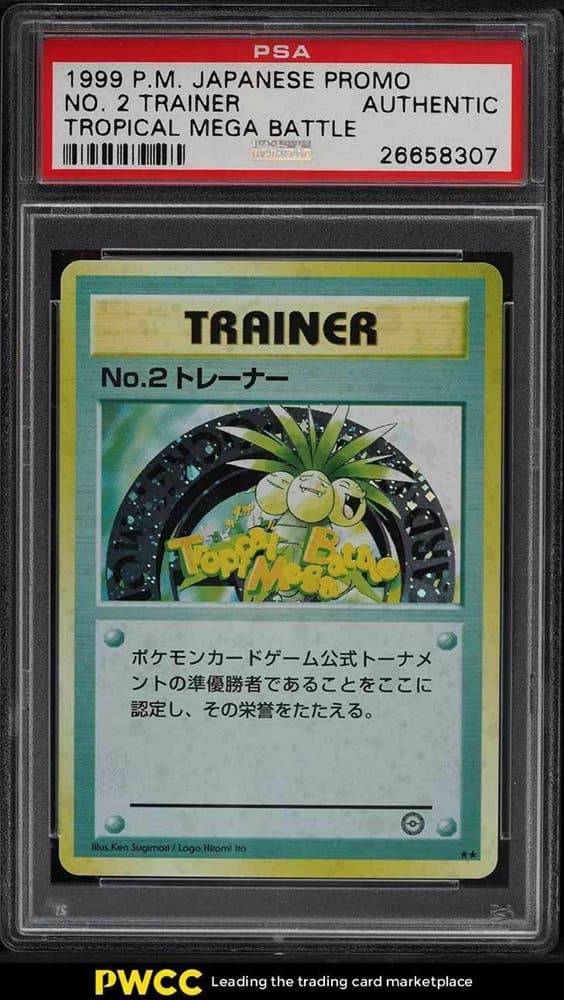 The Tropical Mega Battle was annual event that took place in Hawaii between 1999 – 2001. Due to the tournament only lasting a few years, the eight limited edition cards that were given to tournament winners of the inaugural event are incredibly rare. Currently, Trainer No. 2 seems to be the rarest of the lot as only five cards have been professionally authenticated/graded, and only one has been sold. The only Trainer No. 2 sold fetched $50,300 on eBay in October 2020.

Only the top three players from each region of the Tropical Mega Battle – Japan, Canada, Latin America, Europe, and the United States – were given Trainer No. 2, which means that only about 15 of these cards were distributed.

Estimated Number of Copies Available: 1
Reason for Rarity: Only made for special presentation
Current Value (Based on Highest Price Paid for a Copy): $360,000
Year Released: 1998 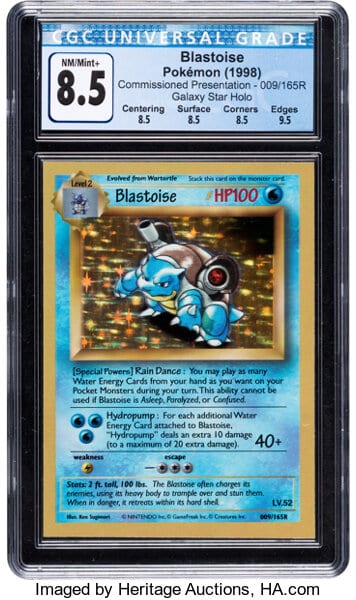 On January 17, 2021, a one-of-a-kind Blastoise only used during a Wizards of the Coast presentation was sold at auction for $360,000, making it the rarest and most valuable Pokémon card in existence. Reportedly, the special Blastoise had been in possession of a past member of the WotC public relations team since it was first made in 1998. The card first gained attention in late 2020 when its existence was made public and it was presented to Heritage Auctions and submitted to CGC Trading Cards for authentication.

The Blastoise was used by Wizards of the Coast to show Nintendo what an English Pokémon card would look like. The card is only one-sided and has a blank back and “Hydropump” is written as one word instead of Hydro Pump.

According to many reports, a second presentation-only Blastoise was created, but no one knows where that card is or whether or not it was destroyed.


If you enjoyed this article, you may want to read about the Rarest Pokemon Cards in Existence here.

10 Rarest Cryptocurrencies in the World