Pokémon Trading Card Game (TCG) was first published in 1996 for the Japanese market. Eventually, the game turned out to be the world’s highest-selling trading card game of all time. More than 43.2 billion Pokémon cards have been sold so far.

In 1999, Pokémon TCG was launched in the Western market with the Base Set of the Wizard of the Coast. It was the time when the concept of first edition cards was also introduced.

These were the cards printed in the first print run of a set and available for a limited period of time. Later these cards were usually replaced by an Unlimited edition. The company continued to produce first edition cards for every set they released till the Neo Destiny.

The first edition Pokémon cards were marked with an “Edition 1” symbol that usually appeared on the opposite side of the expansion symbol. These cards were usually only available in the booster packs.

The first edition cards become rare collectible as only a few copies of them survive in good condition. Here we list 9 of the most expensive first edition Pokémon cards ever sold. 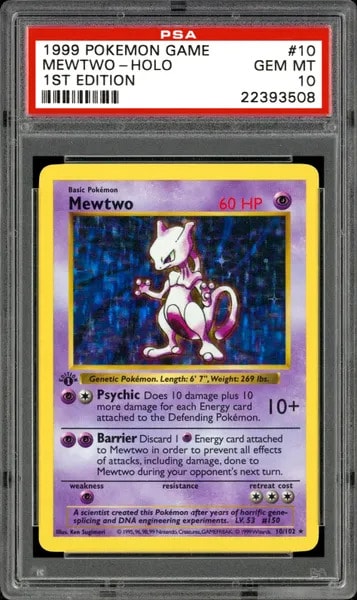 Only 81 copies of this card have been graded GEM -MT 10 by the PSA. However, cards in MINT 9 condition are quite readily available, with 476 known copies.

Mewtwo is one of the most powerful Pokémon. Mewtwo is also known as the Genetic Pokémon, as it was created in the lab by DNA engineering and gene splicing. 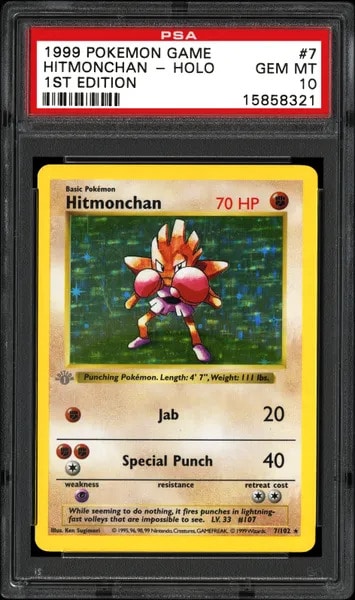 Hitmonchan is not a very popular character in the game. However, the First Edition Holographic Hitmonchan managed to fetch $23,100 in an auction held on November 26, 2020.

The holofoil area of the card is extensive and clear. That makes it extremely difficult to grade this card. Only 57 PSA 10 copies of this card are known in the world. The card is primarily collected by those who aim to complete the set.

The name Hitmochan was a reference to actor and martial artist Jackie Chan. In the Japanese version, the character is called Ebiwalar, which comes from the name of Japanese boxer Hiroyuki Ebihara. 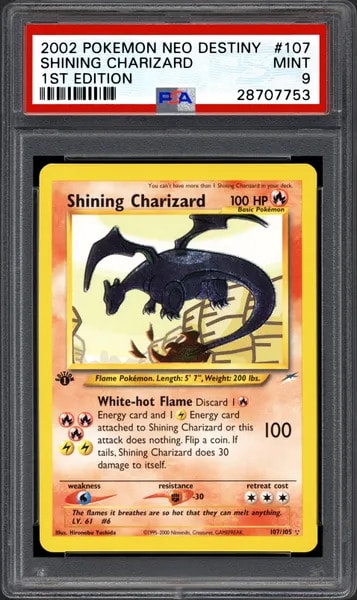 This card was part of the Neo Destiny, the last set with first edition cards. The card is comparatively a late release, and thus finding it in good condition is easier.

A total of 835 copies of the 1st edition Shining Charizard have been submitted to PSA. Among them, 241 copies received PSA 10 grading.

The Neo Destiny set came with eight secret rare Shining cards. On these cards, the holofoil was on the character and not in the background. This unique design makes these cards highly sought-after by collectors.

Shining cards were first introduced in Neo Revelation set released in the US on September 21, 2001. 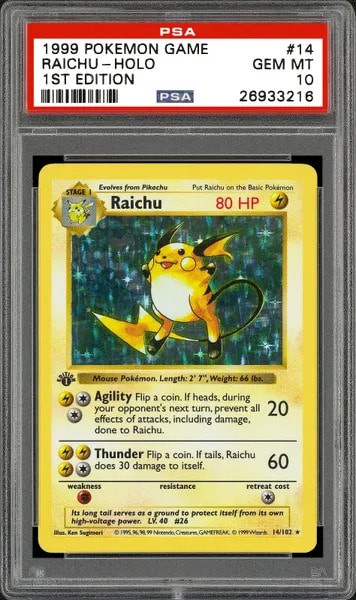 It is yet another card from the 1999 release. One example of these cards was sold for $34,040 in 2021 by Lowpoppings. It is a rare card with only 88 known copies in Gem condition. However, if you do not mind buying a card in poor condition, it will not be as hard to find.

The card features Ken Sugimori artwork which boosts the price of this card. The card also has a lot of nostalgic value as Raichu was an evolved form of Pikachu, the all-time favorite character in the game.

Pokémon celebrated its 25th anniversary in 2021. As a result, the prices of collectible Pokémon cards skyrocketed in late 2020 and early 2021. All the cards sold during this period fetched much higher prices than usual. 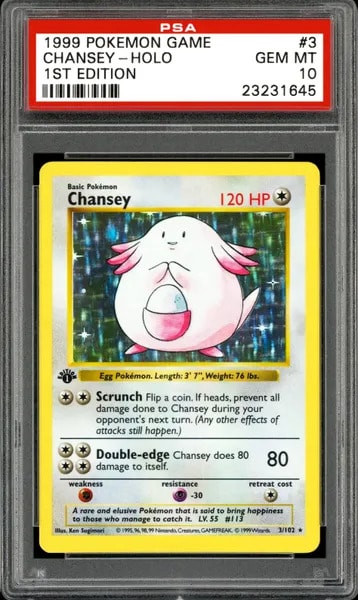 PSA has graded 1,654 copies of this card, and only 48 were in GEM condition. The value of this card is clearly driven by its rarity.

Chansey is a gentle and kind-hearted character. It is believed that Chansey brings good fortune to those who catch it. 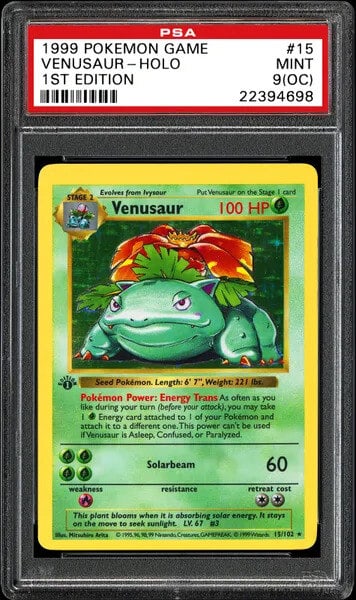 Venusaur is the final form of starter Pokémon, Bulbasaur, and the mascot of Pokémon Green and Pokémon Leafgreen.

The availability of this card in good condition is relatively higher than many others on this list. Still, the card was able to fetch $60,000 in an auction held on January 4, 2021. Another card was sold for $50,000 in November 2020.

Venusaur was a part of the Pokémon Base Set – Big Three. The other two were Charizard and Blastoise. 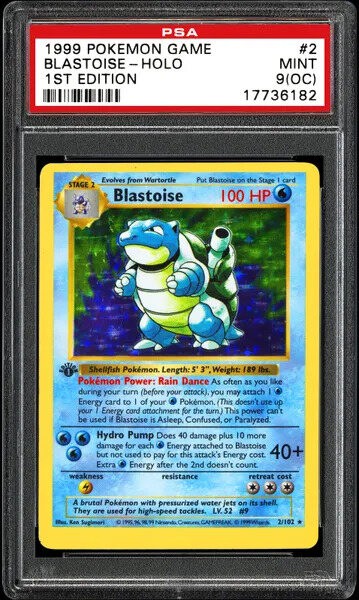 The total known population of this card is relatively higher than many other cards on this list. PSA has so far graded 2,395 copies of 1st Edition Holographic Blastoise; 100 of them received GEM – MT 10 grade. 622 copies were in MINT 9 condition.

Blastoise was among the original three starter Pokémon. It is considered one of the coolest-looking Pokémon, but the character is often overshadowed by Charizard. 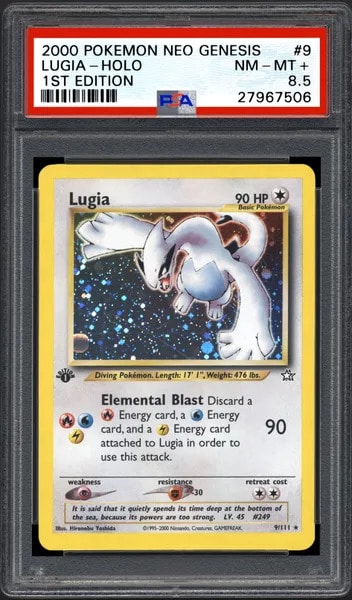 Lugia was an iconic character for Gen 2. The character was immensely popular among the children who grew up in the 2000s. This legendary Pokémon was featured as a star in Pokémon The Movie 2000.

The character first appeared in Trading Card Game in the Neo Genesis set and was an instant hit.

Years later, when Pokémon celebrated its 25th anniversary, the card became one of the most coveted items in Pokémon auctions. One example of this card was sold for $129,000 on November 20, 2020.

Only 45 examples of PSA 10 First Edition Lugia from Neo Genesis exist, while only 3 copies of BGS 10 are known.

Beckett Grading Services (BGS) is known to be a lot tougher on grading and Professional Sports Authenticator (PSA). However, PSA is much bigger in operation and has certified over 40 million items, while BGS has authenticated only around 12 million. 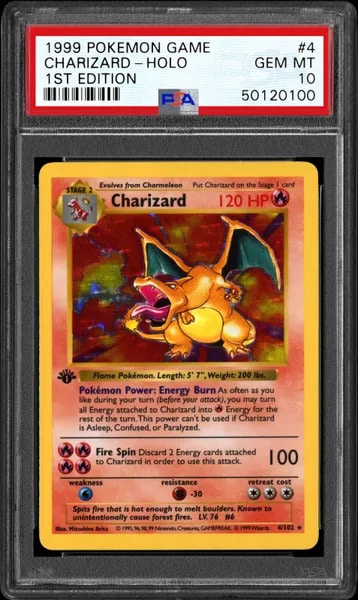 Holographic Charizard is the most expensive first edition Pokémon card ever sold. This holy grail of Pokémon cards was sold for an astonishing $420,000 at a PWCC auction held in March 2022.

However, it was not the first time that the price of this card reached a six-figure number. The card set a record when, in November 2020, one example of Grade 10 First Edition Charizard was sold for $295,300. The record was broken only a few days later when a bidder dropped $350,100 for this card.

Again, in March 2021, another example of the card was sold for $399,750 at the Winter Auction held by the auction house Goldin Auctions.

The most expensive Pokémon card ever sold is a Pikachu Illustrator card from 1998. Only 39 examples of this card were released as part of a prize for the Pokémon Illustration contest. In July 2022, one example of this elusive card was bought by YouTuber and Professional wrestler Logan Paul who paid $5,275,000.

9 Most Expensive House in Massachusetts