The Pokémon Trading Card Game, or Pokémon TCG, is a collectible card game published in 1996 by Japanese publisher Media Factory. As of August 2022, there are 101 card sets released in America, including special sets.

The last released set is Sword & Shield – Lost Origin, but the more interesting set is the Chilling Reign from the same collection, released in June 2021.

The Chilling Reign collection peeks into the frozen Crown Tundra in Sword & Shield, focusing on Legendary Pokémon, with rare versions of fan-favorite Generation I Pokémon cards. This set also brought back the popular Alternate Art card variants that used to be present in Battle Style expansion.

This expansion has over 190 cards, which could be a valuable addition to any collection, but we are focusing on the rarest Pokémon cards from the Chilling Reign! 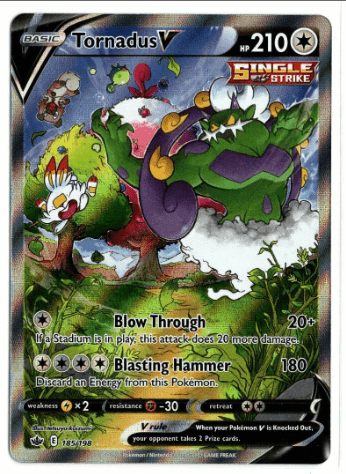 Tornadus is a Flying-type Legendary Pokémon introduced in Generation V. This Pokémon doesn’t evolve into or from any other Pokémon. However, it has a second form by the name Therian Forme.

His original Forme is called Incarnate Forme, and one can transform him using the Reveal Glass.

Tornadus is a part of the Forces of Nature, along with Thundurus, Enamorus, and Landorus, a quartet of myth genies. Tornadus is a rare Pokémon that is 100% male and considered a prankster in his Incarnate Forme. It has two purple, sharp horns on its head with purple spots all over its body.

Forces of Nature, also known as Legendary genies, were originally a trio before Enamorus was introduced. They are a part of the children’s folktale, in which the “Great Landorus” allegedly punished Tornadus and Thundurus for massive destruction across the land. Hence, people built him an honoring shrine. 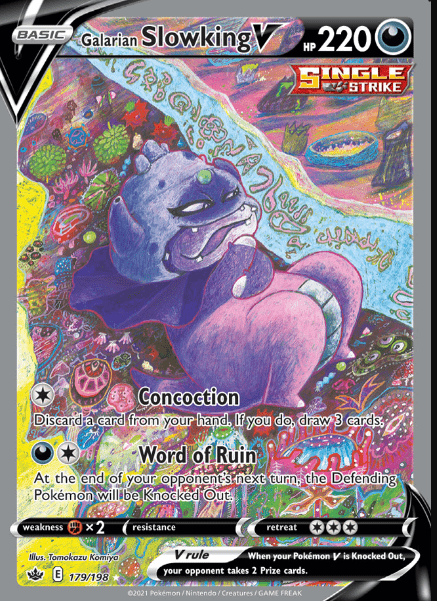 Slowking is a dual-type Psychic/Water Pokémon introduced in Generation II. This adorable bipedal Pokémon evolves from Slowpoke, but it can turn into a Psychic/Poison type Galarian Slowking in Sword and Shield patch.

Galarian Slowking has a Psychic-type spell called Eerie Spell which it uses to attack opponents. Slowking cards usually sell for less money but can cost up to $200 in mint condition. This card shows Slowking in a colorful realm of his powers, with 220 Hit Points.

Slowking turns into a Galarian Slowking when Shellder on top of its head bites him and causes a chemical reaction in the brain due to Galarica spices. Shellder is a Water-type Pokémon with a spiky, blue shell and an enormously long tongue to lure and capture its prey. It can survive on its own. 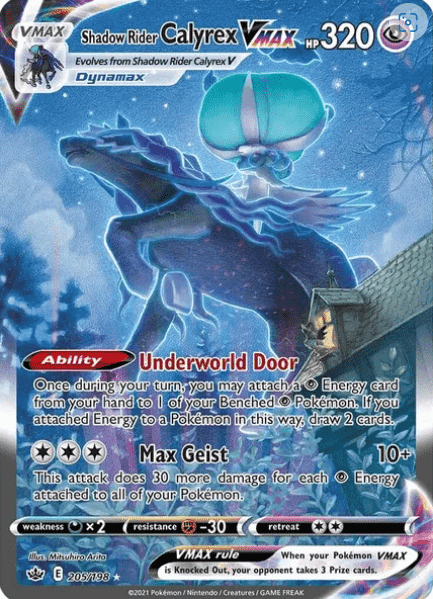 The game rejects the possibility of owning both Riders simultaneously, counting Calyrex as the one true form. Calyrex is the game mascot of The Crown Tundra, a second expansion in the Pokémon Sword and Shield Expansion pass. 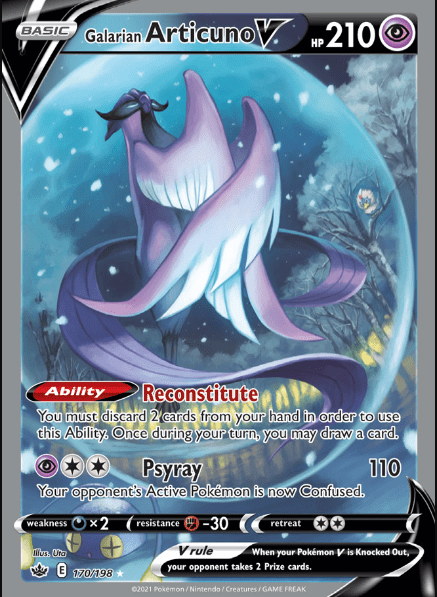 Galarian Articuno is a cruel, arrogant version of the Legendary Pokémon Articuno – a dual-type Ice/Flying Pokémon people got to know in Generation I. It has blue wings made of ice and a dark-blue crest on its forehead. Articuno has the power to control ice as it chills moisture in the air with wings.

For the longest, fans believed that Articuno and its Galarian form are of the same evolution.

However, Galarian Articuno has a highly refined manner and crisp flaps of its wings, seemingly staying airborne through its powers, flapping his wings minimally.

Freezing Glare is the signature move of Galarian Articuno, as he is the only known Legendary Pokémon capable of learning this move. Freezing Glare arrived in Generation VIII as a damage-dealing Psychic-type move with a ten percent chance of freezing the target. 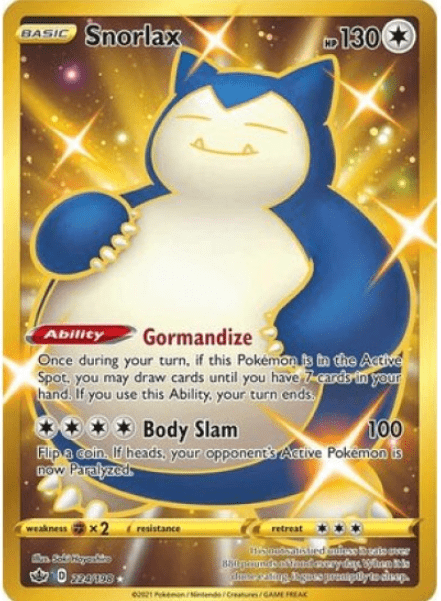 There are two other golden Pokémon of the same Secret Rate in Chilling Reign – Electrode and Bronzong, but Golden Snorlax is the most valuable card, with an estimated price of $240. This massive, blue-green mammal does not do much in the game, as his abilities include Immunity and Thick Fat.

But even with this, Snorlax is one of the most loved Pokémon. It evolves from Munchlax with high friendship and loves to sleep in inconvenient locations.

Golden Snorlax shows a blue, shiny Snorlax in a golden background, the only Snorlax card in the Chilling Reign collection.

Snorlax has a 25 percent rate of being found in the game. However, it needs to be awakened with music before that. It wakes up to eat, usually found in forests and mountains nodding off. It has outstanding power when necessary and is laid-back enough to let children and other Pokémon bounce on its stomach. 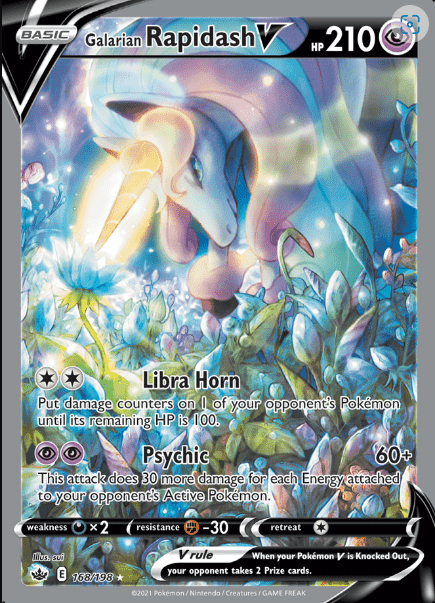 Rapidash evolves from Ponyta in Generation I, a very agile Pokémon with impressive racing power. The faster it goes, the longer the flames of its mane (flame-like hair) will become. Galarian Rapidash also channels its psychic power, developing sharp horns that can cut through metal.

Some Pokémon fans believe that Galarian Rapidash doesn’t exist due to a different form of its precedent. Rapidash is a Fire Horse species, known as Kantonian Ponyta, while Galarian is a Unique Horn Pokémon – an almost impossible transformation. 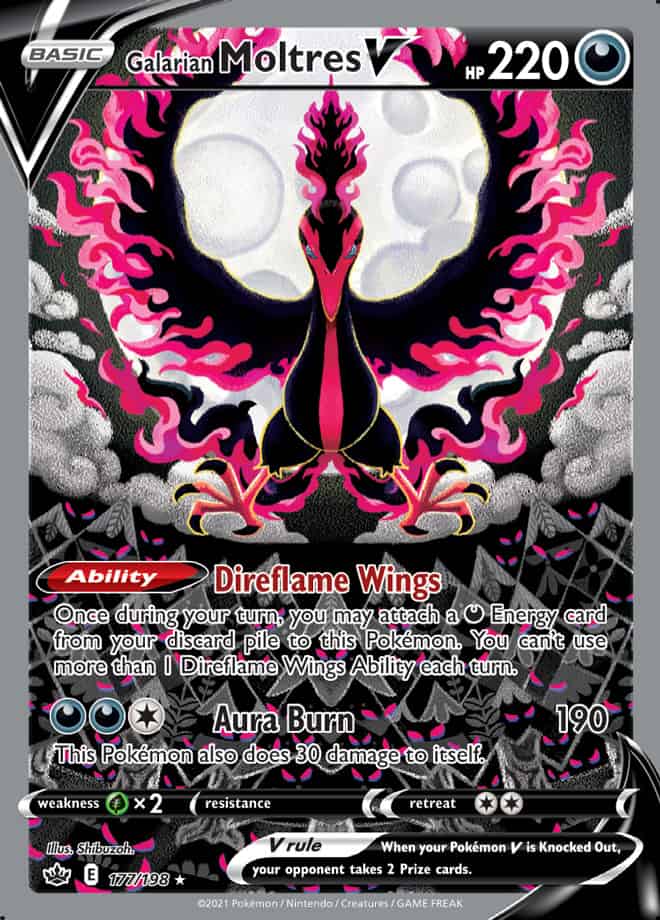 Moltres is a Fire/Flying type of Pokémon that arrived in Generation I, but it changes to the Galarian form in Generation VIII with a Dark/Flying style.

The Pokémon is similar to the Phoenix with its long, blowing tail and an orange head crest. It changes colors to red and black plum in Galarian form.

This Alternate Art could sell for more money than the estimated price of $260, as some fans see it as the most sought-after Pokémon card from the Chilling Reign. Galarian Moltres cards with Rare Rarity go for $10-$30 on average, but some in mint condition could be more expensive. 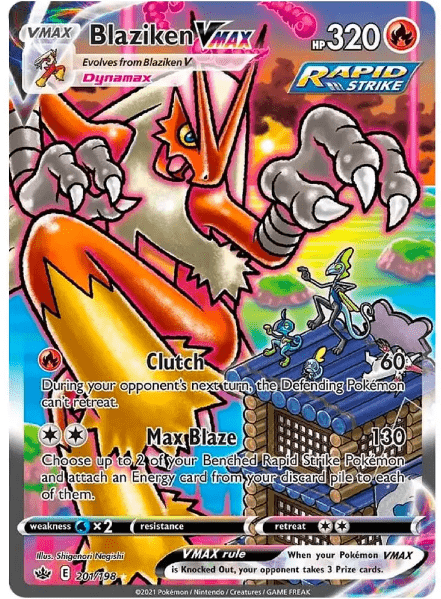 One of the rarest Chilling Reign cards is Blaziken VMAX – Alternate Art. Blaziken is a dual-type Fire Pokémon card, the final form of the cute chicken-like Pokémon Torchic. Blaziken arrived with Generation III, and it has a red body with yellow, gray, and beige accents.

Concerning the cards, Blaziken has a couple of versions, with different Rarities and Estimated prices. Blaziken Alternate Art is the most expensive on every market for the cards, with an estimated price that goes beyond $300 – quite pricey for any collectible cards.

The Blaziken VMAX Card was illustrated by a famous Japanese illustrator Shigenori Negishi, who illustrated only two cards for Chilling Reign – Blaziken Alternate Art and Crabominable, a fighting-type Pokémon card with Uncommon Rarity. 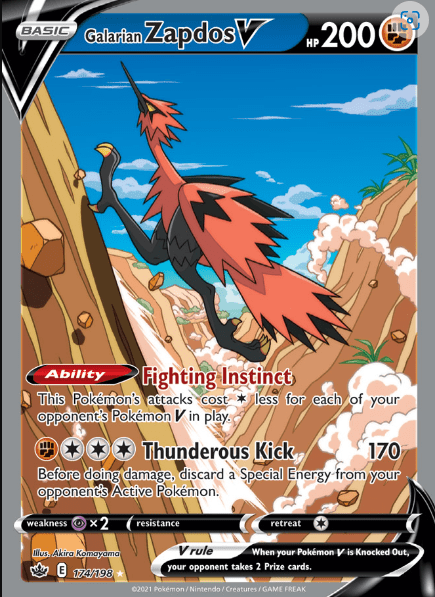 The last Galarian transformation on our list is a dual-type Electric Legendary Pokémon introduced in Generation I. Zapdos doesn’t evolve into or from any other Pokémon, as it has a different form introduced in The Crown Tundra expansion. Zapdos, Articuno, and Moltres are Legendary birds of the Kanto region.

Zapdos is an Electric-type Pokémon with complete control of electricity. Galarian, on the other hand, is stronger and has a thunderous kick.

The price of the Galarian Zapdos card is beyond some of the most expensive Pokémon cards, with usual prices being much lower. One of the rarest sold for $500.

Zapdos changes its fur color in the transformation, downing red-orange fur with muscular legs. Galarian Zapdos is the only known Pokémon to learn Thunderous Kick, as it is his signature move. 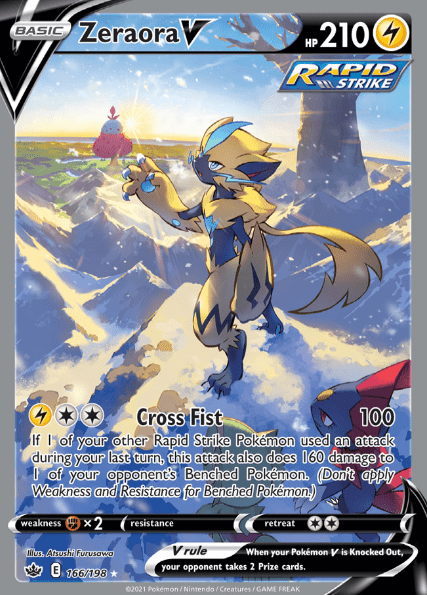 The most valuable and rarest Pokémon card in Chilling Reign is the Zeraora V, which sold for $800 at the beginning of 2022. There are two PSA 10 Zeraora V cards that sold for big money, the second one going for $580. Zeraora is an Electric-type Mythical Pokémon introduced in Generation VII. It doesn’t evolve into/from anything.

Zeraora is a bipedal, feline Pokémon who can absorb voltage and manipulate electricity in attacks, the only Pokémon capable of learning the damage-dealing Electric-type move called Plasma Fits.

Zeraora V is a fan-favorite, beautifully designed card, with Zeraora standing over the snowy mountains – a unique collectible item that would increase the value of every collection.

The most expensive Pokémon card ever sold is The Pikachu Illustrator from 1998, which sold for $5,275,000 in 2021. This Holy Grail of Pokémon cards is the only PSA 10 Pokémon card known to exist.