8 Rarest Books in the World

As much as the world has changed and evolved, many aspects of humanity have stayed the same.

Stories have always been a powerful and compelling way to get a message across, and those messages can connect to us on a deep level. It’s almost like certain tales are a part of our DNA.

There are many books from centuries ago that have been long-forgotten, but these ones have stood the test of time.

Significance: Considered to be the first modern novel. 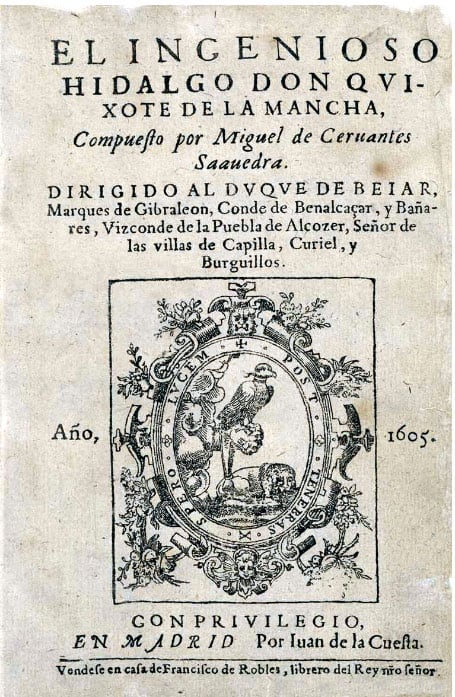 It’s no surprise that a book often called the greatest piece of fiction ever written, by someone who is widely regarded as the greatest writer of the Spanish language, written hundreds of years ago, would end up being worth a lot of money. While it has been re-released countless times over the years, the first edition from 1605 is the most valuable, and the most rare.

Miguel de Cervantes worked as a commissary for the Spanish Armada, and found himself locked up in jail after some mathematical inconsistencies were discovered, due to his reluctance to take much-needed supplies from the rural communities that he was tasked with collecting from. It is believed that jail is where he came up with the idea for this book, which also drew from his experience in the military.

It wasn’t until his later years that he found literary success with Don Quixote, and Miguel de Cervantes passed away one year after the second part was published.

7. De revolutionibus orbium coelestium (On the Revolutions of Heavenly Spheres)

Significance: This book challenged a lot of what we thought we knew about the world at the time. 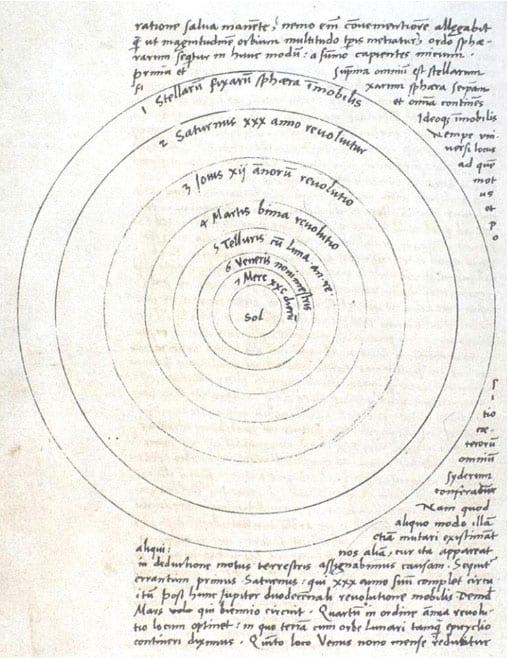 This book has been described by Arthur Koestler, a Hungarian author, as the book that nobody read, and he has stated that it “was and is an all-time worst seller”. Despite that, research shows that many bright mathematical and scientific minds of the time had read this book. On the Revolutions of Heavenly Spheres had a direct influence on the work of Galileo and Sir Isaac Newton. Copernicus brought forward the idea that the sun was at the center of the universe with Earth and other planets orbiting it, which was pretty controversial stuff at the time.

It was so controversial, in fact, that Nicolaus Copernicus allegedly waited until he was on his deathbed before releasing it. This paints a romantic picture, however it’s not necessarily the consensus.

There are believed to be 260 original copies still in existence.

Significance: A collection of 36 of the legendary playwright’s pieces.

William Shakespeare just might be the most influential writer of all time, and this is the premiere collection of his works, compiled and printed years after his passing. He was quite well-off by the end of his life, but he hadn’t achieved the legendary status his works enjoy today.

Prior to the First Folio of his plays, some of these plays could be purchased on large sheets of paper that had been folded (known as octavios and quatros) for the equivalent of roughly £4 in today’s terms. Purchasing the entire First Folio was estimated to have cost around 2 months wages for a typical skilled worker at the time.

If not for William’s friends John Heminges and Henry Condell putting this collection of 36 plays together, many of Shakespeare’s most iconic stories may have been lost to history.

According to the Folger Shakespeare Library, scholars believe there were originally around 750 copies made, with just over 200 existing today, and 82 of those belonging to the Folger collection itself.

Estimated value: There are just over 100 copies available in the world, and the more valuable ones have sold for $7.9 – $11.5 million.

This book is filled with hundreds of stunning drawings of birds found in America, some of which have since become extinct. There are 435 watercolor images of birds, true to life-size. Around 50 of the background drawings were done by Audubon’s assistant, Joseph Mason.

Audubon would find some of the birds himself, and others would be given to him from people who wanted to help him accomplish his goal of painting every bird in America. He would use wires and strings to position the birds into poses while he drew them.

The Stark Museum of Art in Orange, Texas is home to John James Audubon’s personal version of the book, and other copies can be found in museums and University collections. It is believed that less than 200 complete sets were compiled in total. The collection was available as a subscription, with the total cost coming in at around $1,000. An accompanying text was released separately, and not with the drawings themselves, in order to avoid having to give a copy of this very expensive project to libraries as a donation.

There were an estimated 180 copies originally printed, with most being printed on paper, but some being printed on vellum (calfskin). They were printed custom-to-order, and customers could get vellum for an added fee. There are less than 50 copies left today. Germany is in possession of 14 copies, and America is next in line with 10. Only about half of the remaining copies are complete, and the rest exist in various degrees of completion, some are just a single volume, some are even less than that.

3. The Tales of Beedle the Bard

First published: The 7 handmade copies were presumably created not long before the initial 2007 charity auction.

Significance: Handmade by the author of the best selling book series of all time.

This is the most recent of all the rare books featured on this list. The Tales of Beedle the Bard was referenced in Harry Potter and the Deathly Hallows, and J.K. Rowling went on to hand write and illustrate seven copies of this beautiful leather bound rarity.

Six copies were given out to her editors and friends of hers as tokens of thanks for their support. The seventh copy was auctioned off in support of charity, and raised a whopping $3.98 million dollars when it was purchased by none other than Amazon. The author herself commented on the sale: “I am stunned and ecstatic. This will mean so much to children in desperate need of help. It means Christmas has come early for me.”

This is the highest price ever fetched for a modern manuscript, and also the most expensive children’s book ever sold. A second auction for a different copy of the book, gifted to Rowling’s publisher, fetched just shy of $500,000, a considerable drop the original auction value.

2. The abc with the Pater noster, Aue, Credo, and .x. co[m]maundementes in Englysshe newly translated and set forth, at the kyngs most gracyouse commaundement

Significance: One of a kind.

There is only one known copy of this children’s book. Unlike some of the books on this list, it has never sold for millions of dollars, it’s not on the radar of the world’s richest people to own in their collections, there aren’t world-class galleries beating down the door to own it… but it’s still rare in every sense of the word. It fills an interesting place on this list. Right now, you could fold a piece of paper in half, scribble a few words, and have a book equally as rare as this one. The same goes for any of the other hundreds of books that are a part of Project Unica, which is an initiative from the University of Illinois to document and digitally-reproduce one of a kind books.

It’s the historical significance that truly makes some of these books stand out. For instance, the next one on this list is also one of a kind, but it has sold for millions, belongs to Bill Gates, and any collector would love to possess it.

Significance: An unfiltered look into one of the brightest minds of the modern era. 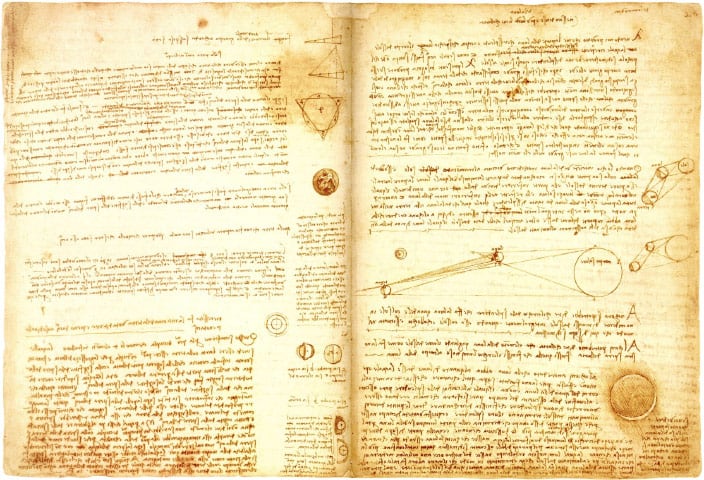 This is a 72 page journal filled with scientific observations from the brilliant mind of Leonardo da Vinci. The original was hand-written and is one-of-a-kind. When you look at every other book that is one-of-a-kind, and you factor in how sought after this one is, it’s safe to say that Codex Leicester is the rarest book in the world.

It was last sold at an auction in 1994 to Bill Gates for $30.8 million, which is nearly $51 million in today’s currency. The Codex has toured and been on display, and scanned images from this book were even used as a screensaver in Windows 95.

It was purchased by Thomas Coke (Who would go on to be one of seven people created Earl of Leicester) in the 1700’s, and briefly renamed as the Hammer Codex from 1980-1994 when it was owned by Armand Hammer, and then his estate after his passing in 1990.

This document was ahead of its time, providing theories that would come to be proven true hundreds of years later in some cases. It discusses a wide range of topics from why fossils are found in mountains, the movement of water, the luminosity of the moon, and more. It’s written on 18 sheets of paper which were folded in half, with writing on both sides, to create a total of 72 pages. Along with the text, there are many drawings and diagrams as well.