10 Most Expensive Parrots in the World

Parrots are some of the most colorful and unique birds in the world. Their intelligence and ability to mimic speech make them stand out among other types of birds. These charismatic animals have been beloved pets for centuries, and today, they continue to be a popular choice among bird lovers.

If you have a thing for parrots, you’ll be pleased to know that there are many different species of parrots available as pets. These intelligent birds make great companions and can quickly develop a strong bond with their owners.

Read on and take a closer look at the 10 most expensive parrots in the world. 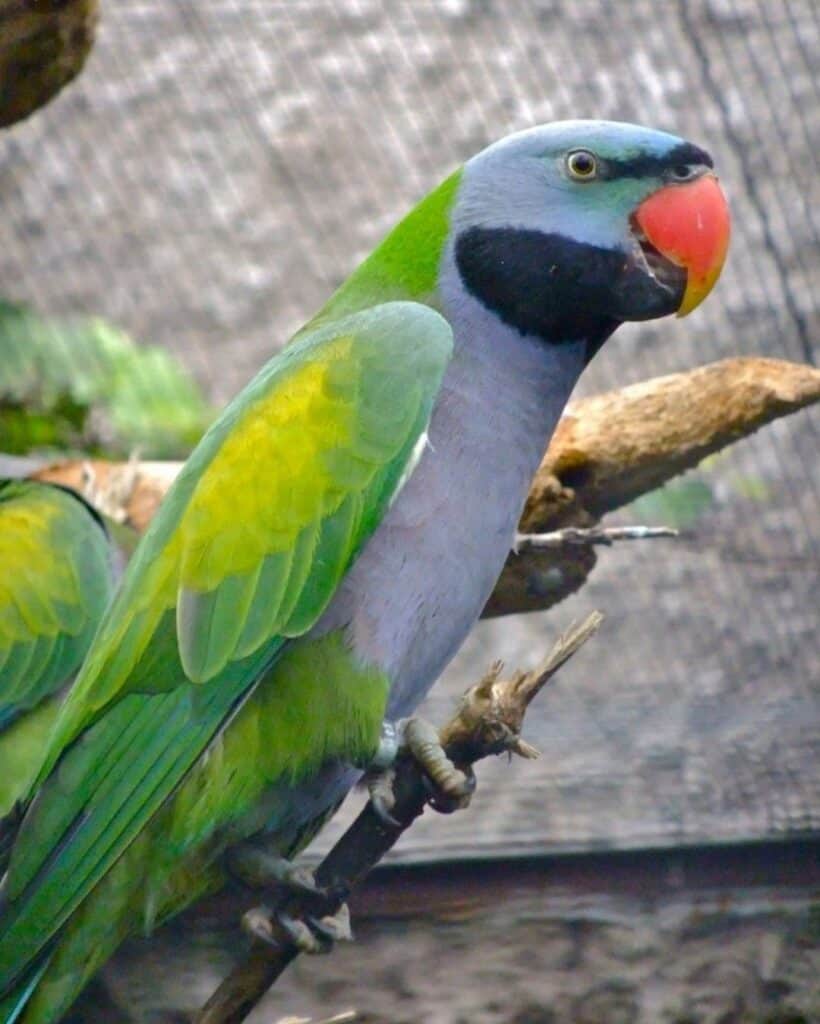 Derbyan Parakeets are social birds that live in small flocks of 6-10 individuals. They are known to mate for life, and pairs will often build their nests close to each other.

These parakeets are very vocal, and their calls can often be heard echoing through the forests where they live.

Derbyan Parakeets are listed as Near Threatened on the IUCN Red List, due to habitat loss and fragmentation. These birds are also popular in the pet trade, which has contributed to their decline in the wild. 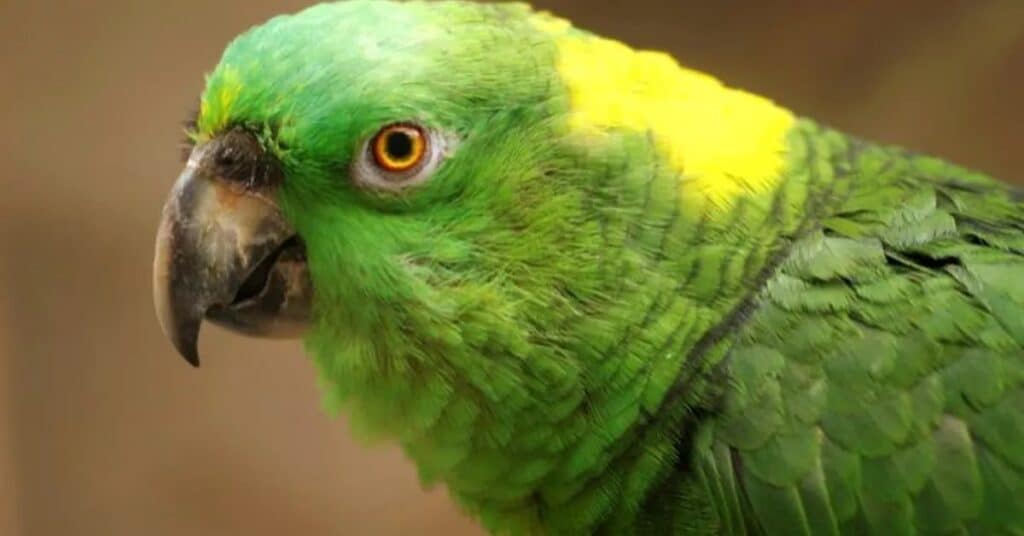 The yellow-naped amazon (Amazona auropalliata) is a medium-sized parrot with mostly green plumage, a yellow head, and a bright red band across its lower back and rump. It is a popular pet bird due largely to its talking ability and is one of the most common amazon parrots seen in aviculture.

The yellow-naped amazon is endemic to humid lowland and foothill forests of Central America, ranging from southern Mexico to northwestern Costa Rica.

Its diet consists primarily of fruits, nuts, and seeds, and it often feeds on the flowers and buds of trees as well. The yellow-naped amazon is not considered to be endangered, although its numbers have declined somewhat due to habitat loss and capture for the pet trade.

It is protected by law in some countries, and captive breeding programs have been established to help ensure the species’ survival.

The yellow-naped amazon is generally a quiet bird, but it can be quite loud when it feels threatened or excited. It is also known to imitate the calls of other birds, as well as sounds made by humans and other animals. 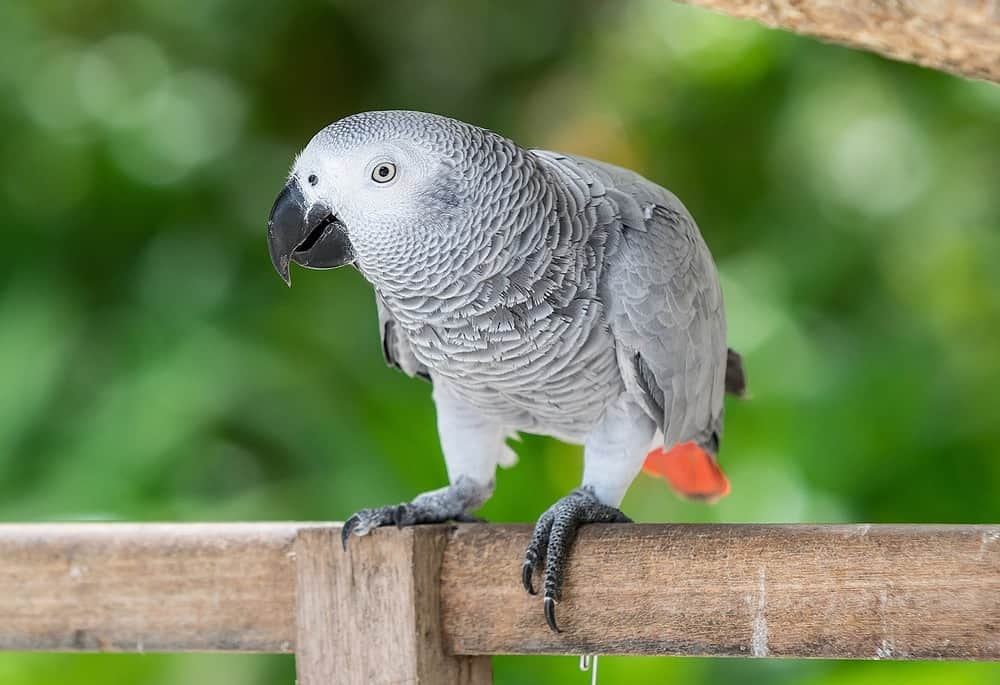 The African grey parrot is a medium-sized, predominantly grey, black-winged parrot endemic to the primary and secondary rainforests of West and Central Africa. African grey parrots are particularly known for their ability to mimic human speech and have been kept as pets since Roman times.

African grey parrots are social creatures and need interaction with other birds or humans to stay healthy and happy. They are also considered one of the most intelligent bird species and are able to solve complex problems.

They are also known to have a lifespan of up to 60 years in captivity, making them one of the longest-lived bird species.

The African Grey has one of the largest brains of any bird, relative to its body size. 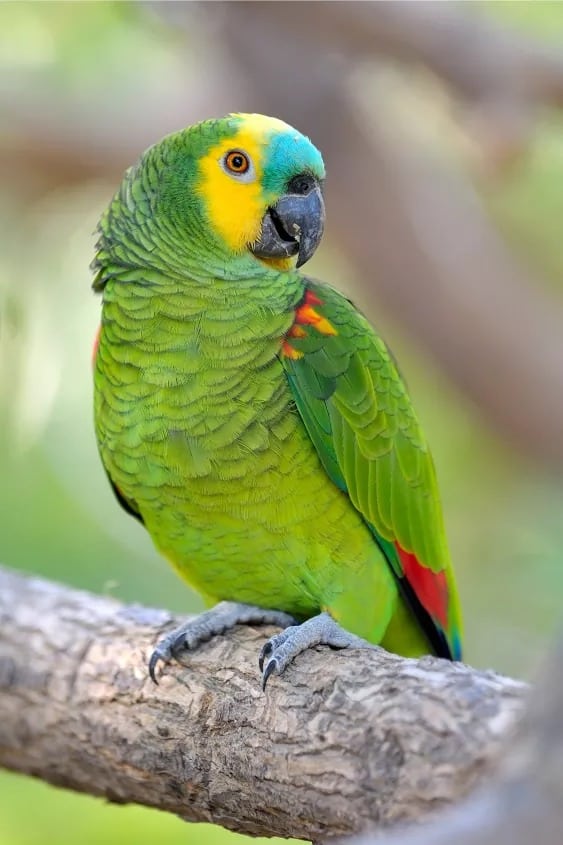 The blue-fronted Amazon (Amazona auropalliata), also known as the blue-fronted parrot and the red-lored amazon, is a South American parrot native to the Amazon Basin of Brazil, Bolivia, Colombia, Ecuador, Guyana, Peru, Suriname, and Venezuela.

It is one of the most popular parrots kept in captivity and is known for its ability to mimic human speech. The blue-fronted amazon is a medium-sized parrot with a length of 30–32 cm (12–13 in) and a weight of 280 to 510 grams. The plumage is mainly green, with a blue forehead and crown, and red on the sides of the head and neck. The bill is black and the legs are grey.

There are two color morphs, the “red-lored” and the “yellow-lored”. In the red-lored morph, the forehead and crown are red, while in the yellow-lored morph they are yellow.

The blue-fronted amazon is sexually dimorphic, with the males having brighter plumage than the females.

The blue-fronted amazon is a social bird that typically forms flocks of 10 to 20 individuals, but larger flocks of up to 100 birds. 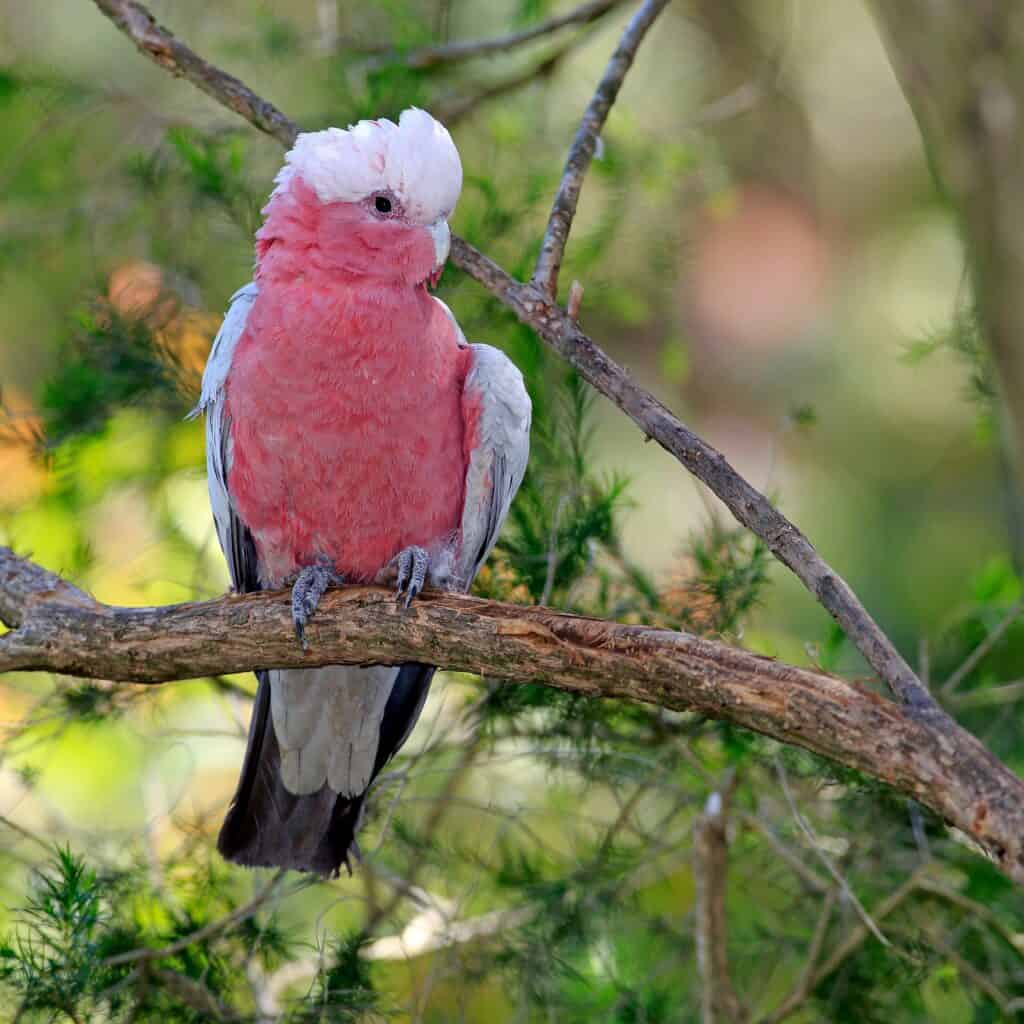 A Galah Cockatoo is a type of parrot that is native to Australia. They are also known as Rose-breasted Cockatoos or Pink and Grey Cockatoos. These birds are easily recognizable by their pink and grey plumage, as well as their distinctive call which has been described as sounding like ‘chocolate’.

Galahs are social birds and often live in flocks of up to 30 individuals. They are not shy around humans and are often seen in urban areas, where they will scavenge for food.

These birds are also known for being very playful and have been known to use tools, such as sticks, to play with.

The Galah Cockatoo is the most common cockatoo species found in Australia. 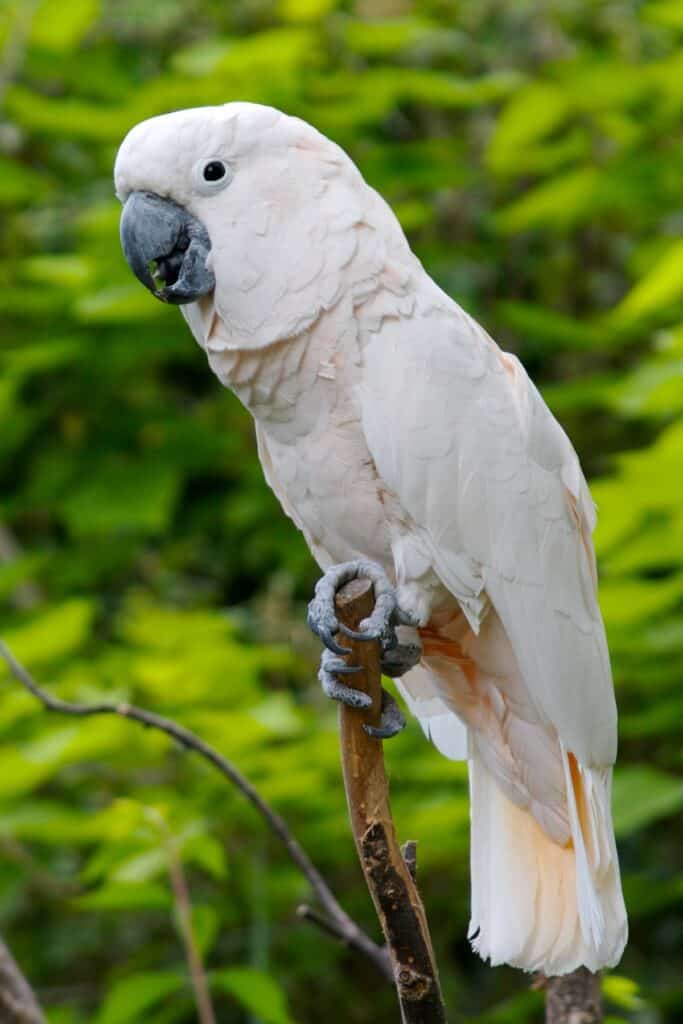 A cockatoo is a member of the bird family Cacatuidae, which includes 21 species. The family is split into two subfamilies: the true cockatoos, comprising 11 species in five genera; and the corellas, comprising 10 species in four genera.

Cockatoos are found in the woodlands and forests of Australia, New Guinea, the Solomon Islands, and Indonesia.

Cockatoos are relatively large birds, ranging in size from the pygmy cockatoo, at as little as 10 inches (25 cm) in length, to the palm cockatoo, at up to 24 inches (60 cm) long.

Cockatoos have a distinctive appearance, with a crest of feathers on their heads and curved bills. They are also known for their loud calls and their ability to mimic human speech.

The name cockatoo comes from the Indonesian word kakatua, which means “parrot”. The name was first used by Dutch naturalist Pieter Boddaert in 1783. 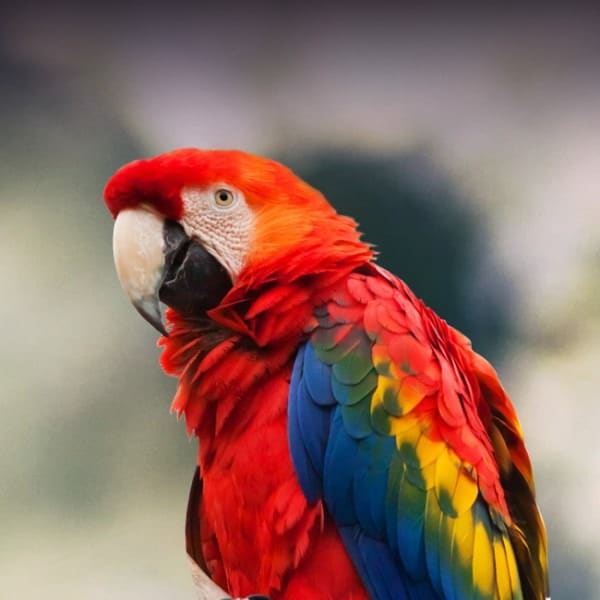 The scarlet macaw (Ara macao) is a large red, yellow, and blue South American parrot, a member of a large group of neotropical parrots called macaws. It is native to humid evergreen forests of tropical South America.

The range extends from extreme south-eastern Mexico to Amazonian Peru, Bolivia, Venezuela, and Brazil in lowlands up to 500 m (1,600 ft).

There is bare white skin around the eyes. Juveniles have greenish-black plumage on their heads.

These birds can live up to about 40 years in captivity, though average life expectancy is probably half that. In the wild, their lifespan is more or less than 20 years. 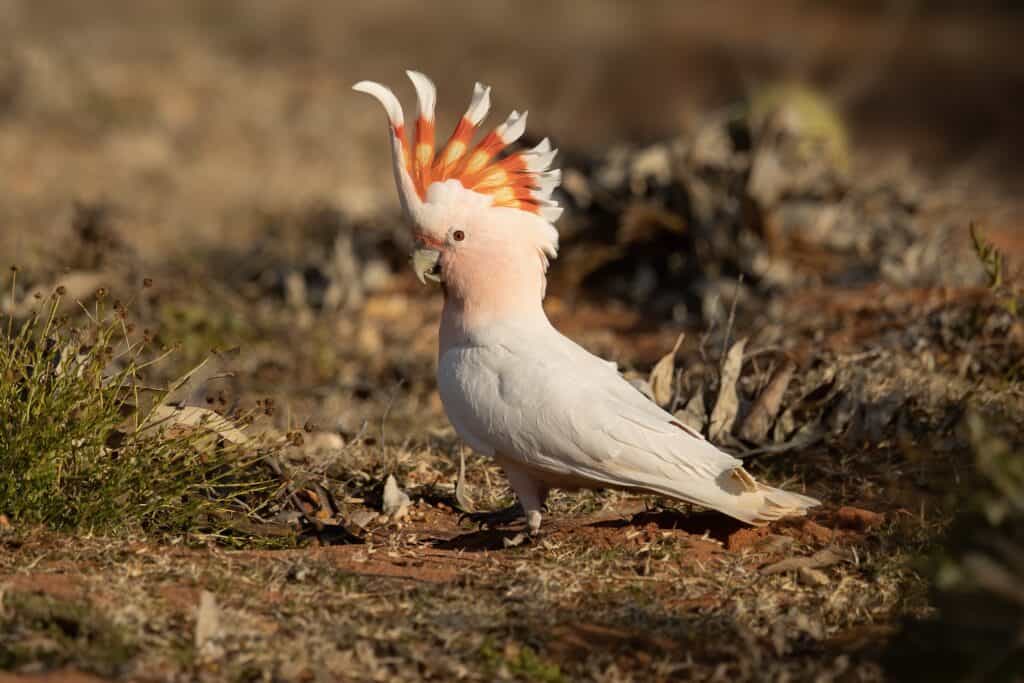 Major Mitchell’s Cockatoos are a beautiful subspecies of cockatoo found in Australia. They are known for their striking pink plumage, which is accented by their black tail feathers. These birds are very social creatures and can often be seen in pairs or small flocks.

Major Mitchell’s Cockatoos are named after Major George Henry Mitchell, who was the first European to document them in 1838.

These birds are considered to be medium-sized cockatoos, measuring about 16 inches in length and weighing around 1 pound. Major Mitchell’s Cockatoos are not currently considered to be endangered, but their populations have been declining in recent years due to habitat loss and degradation.

Major Mitchell’s Cockatoos are not considered to be threatened. However, their numbers are declining due to habitat loss and capture for the pet trade. 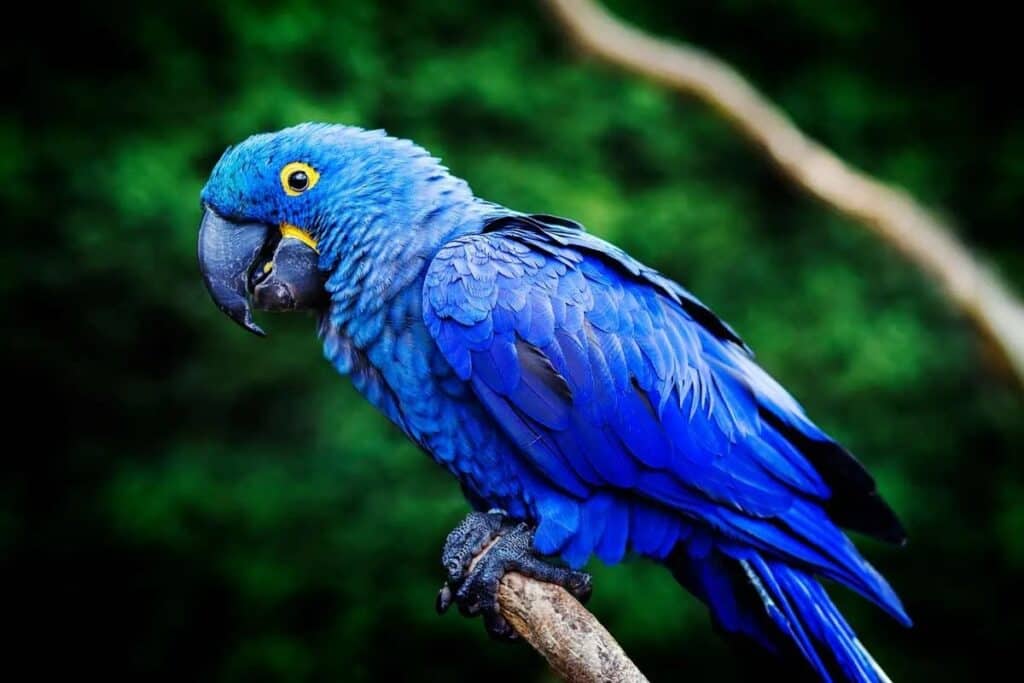 The Hyacinth Macaw (Anodorhynchus hyacinthinus), or hyacinthine macaw, is a parrot native to central and eastern South America. With a length (from the top of its head to the tip of its long tail feathers) of about 100 cm (3.3 ft) it is longer than any other species of macaw.

The hyacinth macaw is blue with a band of yellow feathers around its lower neck. Its beak is black, and it has black skin around its pale yellow eyes.

The adult hyacinth macaw is completely blue, with a band of yellow feathers around its lower neck. The underparts are paler blue, and there is a bare patch of black skin around its pale yellow eyes.

The hyacinth macaw is a member of the genus Anodorhynchus, which contains three other large blue macaws: the glaucous macaw, the indigo macaw, and the Lear’s macaw. All four species are endangered, with the hyacinth macaw being the most critically endangered of the four. 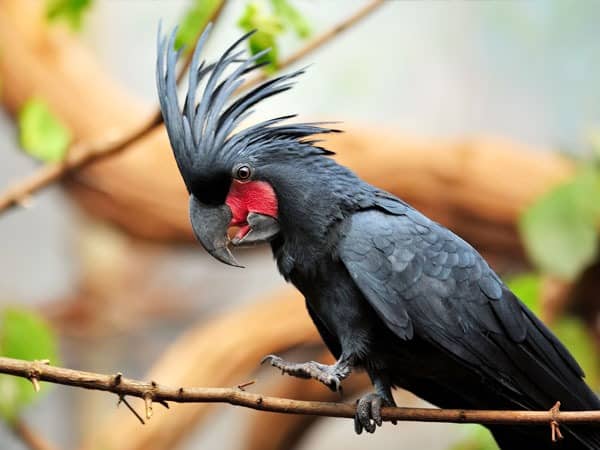 Among all the parrots available for trade, the Black Palm Cockatoo is considered the most expensive of all which typically ranges from $15000 to $20000. This kind of parrot is a species of cockatoo found in northern Australia and southern New Guinea.

It is the largest member of the cockatoo family and is one of the most distinctive and striking of all parrots. The Black Palm Cockatoo is entirely black, with a large, curved bill and long, powerful legs. It is a powerful flier and is often seen soaring above the treetops in search of food.

The Black Palm Cockatoo is an intelligent and social bird and is known for its loud, raucous calls. It is a popular pet bird but is also considered to be a pest in some areas due to its destructive feeding habits.

The Black Palm Cockatoo is listed as Vulnerable on the IUCN Red List and is protected by law in Australia.

The Black Palm Cockatoo is a very intelligent bird and is known for its ability to mimic human speech. These birds are also very affectionate, and bond closely with their owners.

8 Most Expensive Gucci Bags Ever Sold

12 Most Expensive Essential Oils in the World