9 Most Expensive Rust Skins Ever Released

Rust is a multiplayer-focused survival game that launched on PC in 2018 and was later ported to XBONE and PS4 in 2021. It began life as a DayZ clone before spiraling into its own entity. The focus of the game is on surviving in the wild by managing food and drink meters, neutralizing natural threats, crafting gear from stolen/scavenged materials, and fighting other players.

To fight other players, and look amazing while doing it, you’ll need the best gear. In addition to the game’s many base items, there are dozens of skins available to make those items rarer and cooler.

These skins can become scarce for one reason or another and end up being worth hundreds on the game’s item marketplaces like the one on Steam.

Continue reading to learn about the most expensive Rust skins that money can buy at the time of writing. 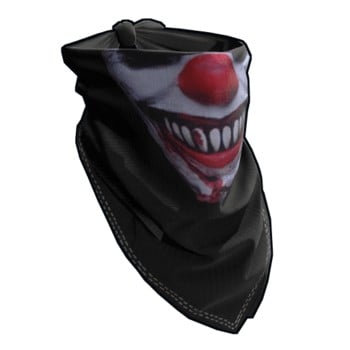 The bandana mask is a common Rust item. The Creepy Clown Bandana is a limited-edition version for Halloween 2015, featuring a creepy clown nose and grin in the place of the wearer’s nose and mouth.

The skin is currently available on the Steam marketplace for up to $332.32, putting it on the lower end of this list of the game’s most expensive items.

Unlike most of the items on this list, the bandana mask cannot be crafted; it can only be bought. 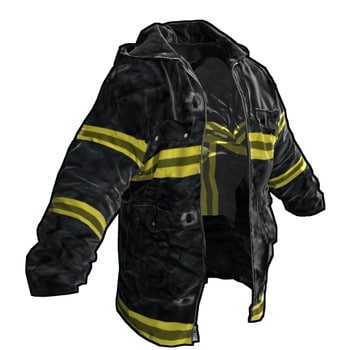 The Fire Jacket is a skin for your jacket items. It’s not functionally different from a normal jacket, but it has the cautionary yellow stripes that give it the contrast of a fire safety uniform. It requires a workbench to craft and is made from 50x cloth and 2x sewing kits.

It takes 30 seconds to craft a jacket and they can be worn with other clothing items like t-shirts, burlap shirts, hoodies, and hide vests.

The Fire Jacket skin is listed for $349 on the Steam market.

Jackets, including the Fire Jacket, all offer the same protection stats. They include 10% protection from cold exposure, 5% from radiation, 20% from stab, 15% from bullet, and 7% from bite. The jacket offers 0% protection from explosions, however. 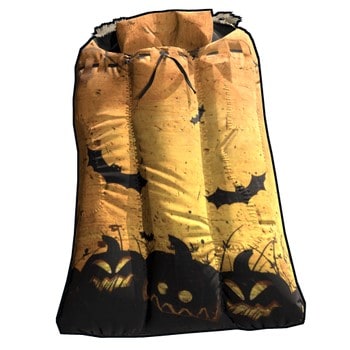 The Horror Bag is priced at $620 on the Steam marketplace. It’s a skin for Rust’s Sleeping Bag item. It’s yellow and has black bats and pumpkins on it, released in 2015 in a limited-edition supply for Halloween.

The sleeping bag item functions as a respawn point that players can place for themselves or for other players on the server. It takes 30 seconds to craft from 30x cloth. Any time a player dies, they can choose to use a sleeping bag to respawn.

It’s important to place your sleeping bag in a secure location since other players can strategically destroy them. Equipped with a hatchet, they can be destroyed in 25 hits. 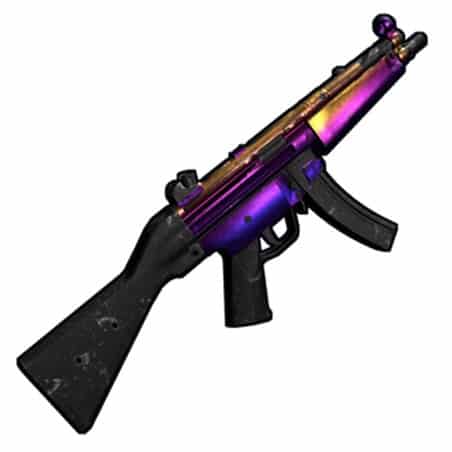 The MP5A4 is a submachine gun that fires 30 rounds of pistol bullets. It does less damage than the Thompson but is more accurate. Players list the MP5A4 as one of the game’s most versatile weapons. It’s also the only military-grade gun in Rust that is craftable.

It can be made with 15x high-quality metal, 1x SMG body, and 2x metal spring.

The Tempered Mp5 currently costs $444.67 on the Steam marketplace. 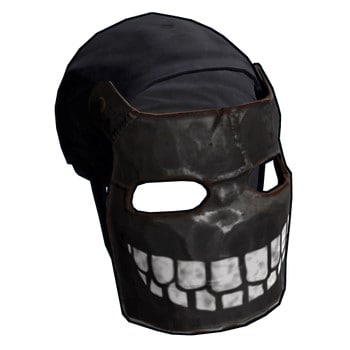 The Big Grin facemask skin was one of the first created for Rust around 5 years ago. There aren’t many in circulation, which has driven up the price of this mask into the hundreds. On Steam, the mask currently costs $676.20. The skin applies to the Metal Facemask item and breaks down into 1x cloth.

Metal facemasks, even the Big Grin skin, are craftable headgear items that offer protection from direct attacks. Their stats include +50% protection from firearms, +70% from stabbing, and +8% from bite and explosion.

They break down into 50x leather, 15x high-quality metal, and 6x sewing kits.

Despite its high price, Big Grin isn’t the most expensive mask on this list. Other luxury Rust masks include Blingin Grill, Army Facemask, Machina Mask, Aztek Night Hunter, Rusted Smile, and others. None are anywhere near as expensive as Big Grin. 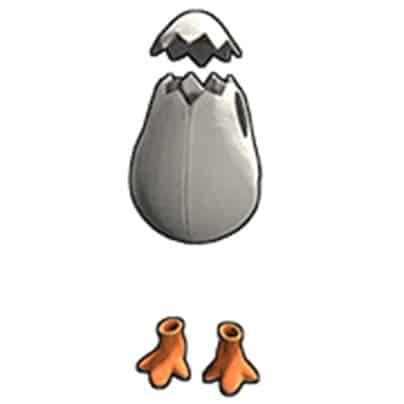 The Egg Suit is a skin that has yet to be released, though it’s planned to hit the Rust marketplace in 2023. It’s already listed on the Steam Marketplace at $605.96, making it the most expensive costume in the game.

Its required ingredients are listed as 60 cloth and 2 sewing kits with a crafting time of 3-15 seconds. One has already sold in the past for $1,800, somehow, but the current most expensive listing on the market is considerably less.

Rust has had Easter events that have introduced egg-related costumes and items in the past. One such costume, the Bunny Onesie, came equipped with egg vision, which improved the wearer’s chance of finding the coveted egg items. The Egg Suit supposedly grants the same ability. 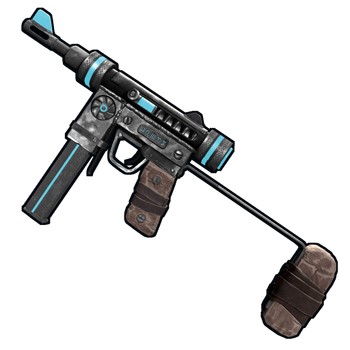 The Alien Relic SMG has the honor of being the most expensive weapon in Rust (the rest of the skins on this list are clothing or constructions). It’s not functionally different from the base game SMG, but it looks a lot cooler and includes streaks of neon blue alien designs.

The base SMG can be crafted with 8 high-quality metal, a metal spring, and an SMG body. These submachine guns hold 24 bullets at a time and shoot faster than a Thompson while dealing less damage. It inflicts bleeding damage but is lacking in the accuracy department.

To get this fancy SMG the expensive way, you’ll have to shell out $1,209.16 on the Steam marketplace.

Other fancy SMG skins in Rust include the Anarchy SMG, Firestarter Custom SMG, and the gun known as tRUSTy Friend. None are anywhere near as rare or expensive as the Alien Relic SMG, however. 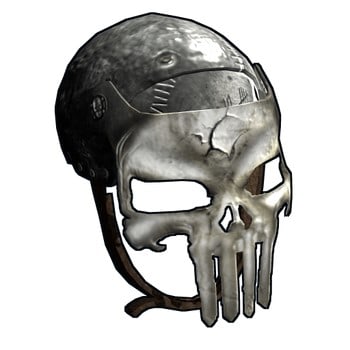 The Punishment Mask is a metal facemask skin that was unfortunately hit with a copyright claim only about two hours after it went up on the Rust store. Around 300 examples of the mask were sold at that time, and these are the only ones that exist on the game’s marketplace now.

As you can imagine, anyone who has a Punishment Mask either holds onto it for bragging rights or tries to sell it for a major profit. Its current value on Steam is up to $1,636.69.

This mask was originally listed on the Steam Workshop as “4 Deuces Skull Mask.” The designer says it was based on the Deuce Four skull logo. However, it was taken down by Disney/Marvel due to a copyright claim based on the well-known logo of The Punisher comics. 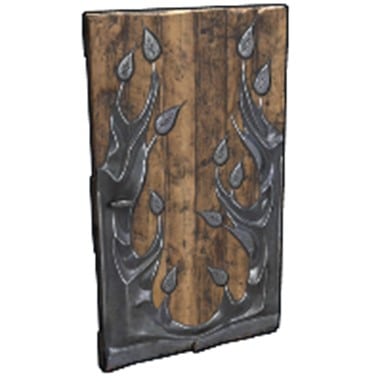 The most expensive Rust skin is the Metal Tree Door. It’s a skin for the wooden door, which is the weakest, cheapest, and most common door in the game.

It can be destroyed with explosions, fire, shotgun blasts, and more.

Unlike wooden doors, the upgraded metal doors resist fire and melee weapons, protecting your most valuable areas. Upkeep of Metal Tree Doors can cost up to 50 metal fragments. Its decay rate is around 8 hours.

The Metal Tree Door, the decorative version of the basic base-building security measure, is the most expensive skin in the game, currently selling for up to $2,019.91.

A lot of different weapons can take down doors like this, but flamethrowers are among the most cost-effective and quickest ways to get through. It can be difficult to get the flames to build up at the bottom of the door, but once they do, it loses its health pretty quickly.

10 Most Expensive Bowling Balls in the World