The lawn mower was invented in 1830 by Edwin Beard Budding in England. The first machine had a 19-inch mowing area with a frame built from wrought iron and cast-iron wheel gears that drove its rotary blades.

Today, the lawn mower is an ultra-high-tech, powered driving machine that can be as fast as a car and about as powerful.

Continue reading to learn about the most expensive lawn mowers that money can buy. 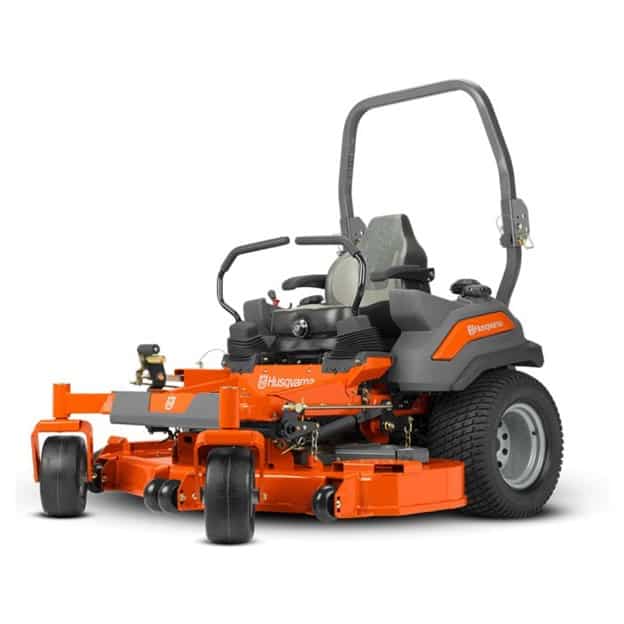 The Husqvarna Z572X Zero Turn Mower is a 72” deck built by Kawasaki, equipped with large hydro-gear ZT-5400 transmissions. Its engine is powered by 31hp and can drive forward up to 12mph.

The mower is equipped with ROPS, or a “rollover protection system,” which is a system of tubes and hinges that prevents the deck from flipping.

A zero-turn mower has its mowing deck sticking out in the front rather than under the machine, which reduces its turning radius to (near) zero. Its parking brake system was a patented creation by Husqvarna that allows the mower to automatically turn its steering levers on and off.

The Husqvarna Group is a company in Sweden that has been around for an astonishing 333 years, founded in 1689. It now manufacturers mostly brushcutters, trimmers, tractors, chainsaws, and lawn mowers. They also have a motorcycle and sewing division. But their very first products were firearms. 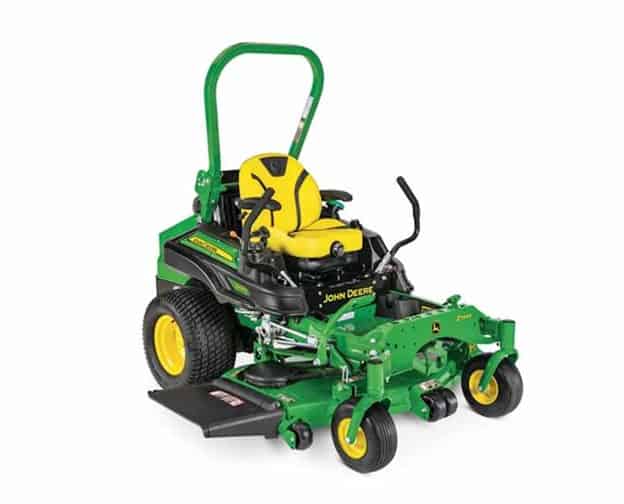 The Z900 Series of John Deere mowers comes equipped with Michelin X Tweel Turf Tires. The engine is powered by 25hp, with fuel efficiency bolstered by its overhead valve design.

The Z994R mower is not the most expensive that John Deere makes (see below), but it still retails for a hefty $19,925.

John Deere is most famous for lawn mowers, but they also make diesel engines, drivetrains, and other agricultural/forestry machinery. Their slogan is “Nothing Runs Like a Deere.”

They pretty much dominated the lawnmowing/harvesting machinery industry until the early 1900s when the International Harvester Company became their biggest competition. 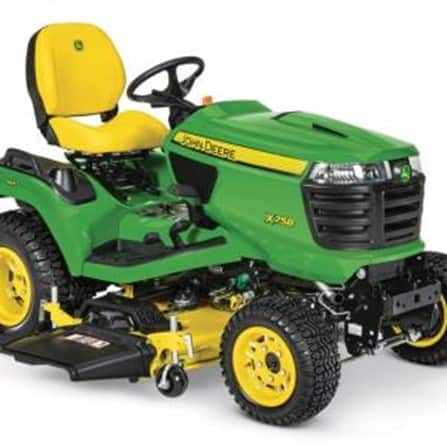 The John Deere X758 Garden Tractor is the most expensive model from the well-known riding mower manufacturer. It’s powered by a 3-cylinder diesel engine that puts out 24hp.

The result is a hydrostatic 4WD riding mower with power two-wheel steering, a power lift system, and Twin-Touch foot pedals. Its available in up to 60-inch mower deck sizes.

Twin Touch foot controls allow the driver to change direction and speed comfortably and precisely without needing a clutch. This allows John Deere users to make tight turns quickly and avoid hazards on a dime.

The X758 retails for $19,799, making it the most expensive John Deere mower on the market.

John Deere is one of the oldest lawn mower companies still in business, tracing its roots back to 1836 when John Deere, a blacksmith, created a non-clogging steel plow for use in the American Midwestern states. Deere & Company was founded in 1868 based on this design. 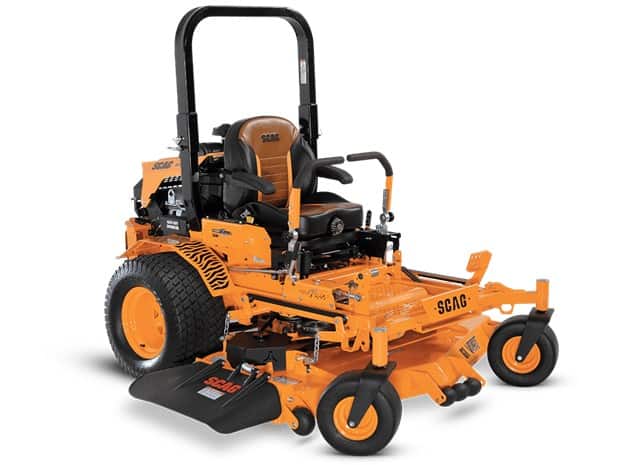 The Turf Tiger II Velocity Plus comes in three deck sizes up to 72”, producing up to 25hp (some smaller models can get up to 40).

The engine by Kubota is a 3-cylinder model equipped with dual hydro-gear pumps and Parker wheel motors, which can propel the mower up to 12mph.

The Turf Tiger II can be equipped with many high-end accessories, including a clam-shell grass catcher, bag grass catcher, Hurricane Plus mulch system, operator-controlled discharge chute, and more.

The Turf Tiger II costs $23,999 from the manufacturer.

The Turf Tiger II is made by Scag Power Equipment, which was founded in 1983 to create residential lawn mowers and turf management equipment. It was bought in 1986 by Metalcraft and expanded from one original model to over fifty, designed with the intent of creating a user-friendly and easy-to-maintain powerhouse lawn mower design. The Turf Tiger II is the culmination of that ambition. 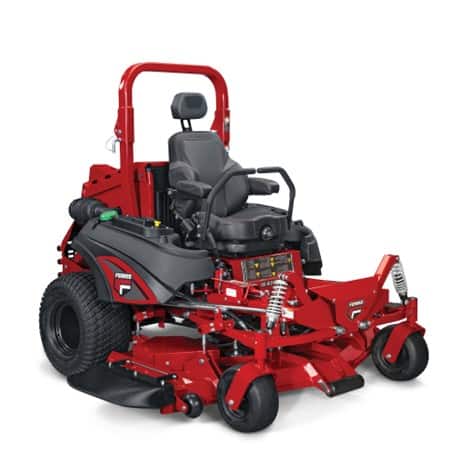 The Ferris IS6200 Zero Turn Mower comes equipped with a CAT turbo diesel engine that gets up to 48hp. The cutting width of the deck is 72” and can mow at a maximum speed of 12mph. According to Ferris, no other zero-turn lawn mower in this class has 48 horsepower.

It’s supported by an independent suspension system that gives it a consistent cut dispersed evenly over adjustable coil-over shocks. This allows the user to maximize comfort while customizing productivity.

A hydraulic lift deck allows you to move the 72” cutting system up or down to suit your needs. This powerhouse mower retails for up to $34,799.

In 1987, they put out their patent for the first walk-behind mower that employed hydrostatic drive. This earned Ferris the award for prestigious innovation from the OPEI (Outdoor Power Equipment Institute). 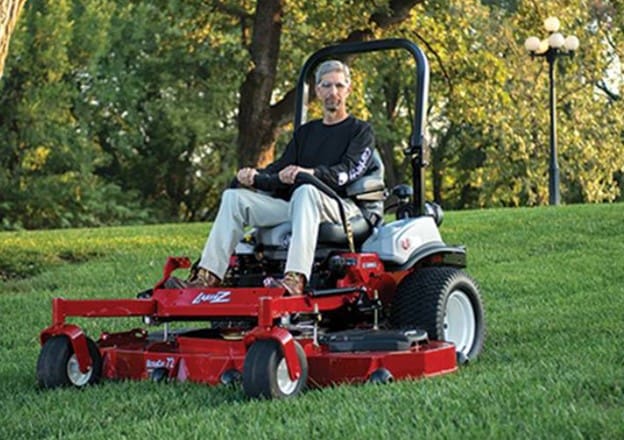 The Exmark Lazer Z X-Series 96” Kohler EFI with RED Technology is a 96” zero-turn mower equipped with a high-efficiency electronic fuel injector and exclusive RED tech, which can boost fuel efficiency by as much as 41%.

The X-Series features an UltraCut Series 6 deck in 4 cutting widths, with the biggest being the most expensive.

It’s a full-floating deck that employs a splined blade driver and double-row bearings to protect the chassis from impacts. The Exmark Lazer also has a rear discharge deck that reduces its noise and increases its clipping control, keeping the driver clean while the grass gets obliterated. This mower costs $39,999.

The mower also includes the Exmark Radius X Series bonuses like the Rollover Protection System (a system of tubes and hinges that prevents the mower from flipping), the LED light kit, and a full-suspension seat. 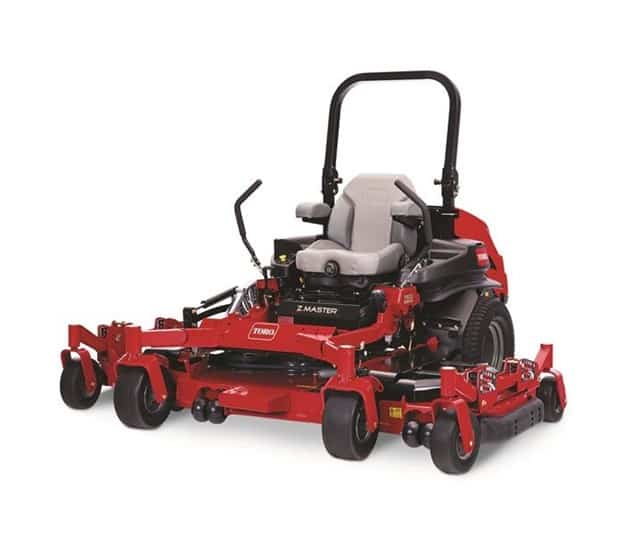 The Toro 74090 Z Master 7500 Zero Turn Mower is the largest the company makes with a 96” 7-gauge Turbo Force deck. The mower comes equipped with a bull-nose bumper, deluxe suspension seat, spindles made from cast aluminum, and a folding wing deck.

The manufacturer Toro outfitted this mower with a 4-stroke, 37hp Kohler EFI engine that can get the mower up to 11.5 mph. It also has a commercial air cleaner. This lawn mower retails for $39,999.

The Toro Company has retailers and distributors in over 90 countries. It was established in 1914, making it one of the oldest companies still running that manufactures lawn mowers and has done so since they were created. Their products have been featured at many sports tournaments, including the 2015 U.S. Open, U.S. Championship, Cricket World Cup, and Ruby World Cup. 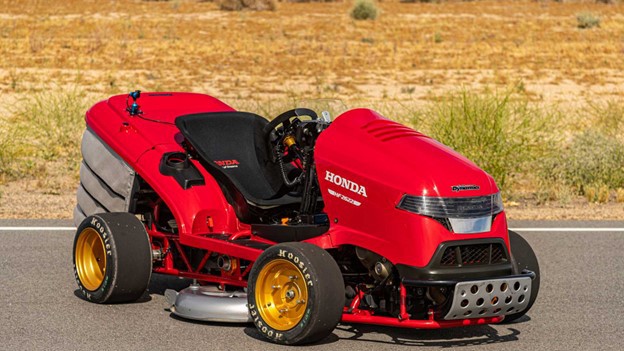 The most expensive lawn mower you can buy is the Honda Mean Mower V2. After winning the Guinness World Record for the fastest lawn mower in the world, Honda came back to the lawnmowing business with a new 134 mph powerhouse.

Six engineers worked for 400 hours to create this Mean Mower, using a 999cc four-cylinder engine that used to be in a Honda CBR1000RR superbike.

The other parts of the mower were 3D-printed using CAD software, including its custom flat-bottomed Sparco racing steering wheel, carbon-fiber paddle shifters, and Kelgate brake calipers. Two 6-inch carbon fiber blades cut grass better than anything else on the market.

Owning this mower, which is practically a racing vehicle in its own right, will cost you $120,000.

To match its high-powered innards, the Mean Mower V2 is fitted with 10-inch Goldspeed wheels that would normally go on a racing ATV, as well as Hoosier R25B racing tires.

9 Most Expensive Rust Skins Ever Released