Since eBay sells everything, it’s only natural for super rare, unique, and exorbitantly expensive items to go up for sale. Though the most expensive eBay items will constantly change, here is our list of the most expensive things for sale on eBay at the time of writing. 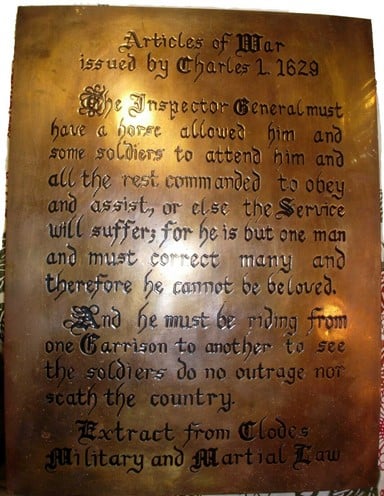 Unlike most rare or historical artifacts on eBay, the Charles I plaque listed for $7.7 million has no information on its page. It is a copper depiction of Charles I’s Articles of War, issued in 1629. It displays codes of conduct for the Inspector General, including his duties and the keeping of his horse.

According to the plaque, the extract was taken from “Clodes Military and Martial Law.”

Contrary to the appearance he tried to create, Charles I was not an experienced military leader. Despite this, he said to his shoulders around the time of this plaque, “Your king is both your cause, your quarrel, and your captain.” 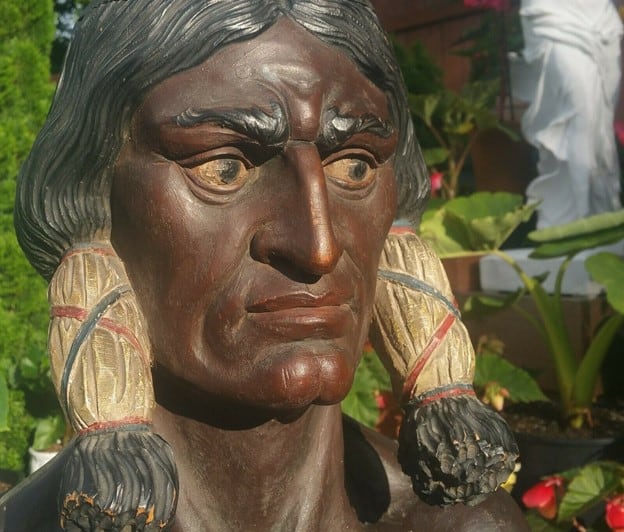 This eBay listing is for a depiction of Sitting Bull, the famous Native American Hunkpapa Lakota leader who has become an icon of cigar stores throughout the United States. The statue is attributed to the carver, Samuel A. Robb, a New York artist who is famous for cigar store carvings.

The rough paint and sculptural similarities to other Robb works, such as a well-known Santa Claus carving, may authenticate this carving as genuine, from the late 1800s to early 1900s. Assuming the statue is real, the poster is asking $8.5 million for this carved Sitting Bull.

Sitting Bull is one of the most well-known resistors against U.S. government policies. He is best known for his defeat of General Custer at the “Last Stand,” as well as his own defeat at the hands of the Indian agency police on the Indian reservation in Standing Rock. 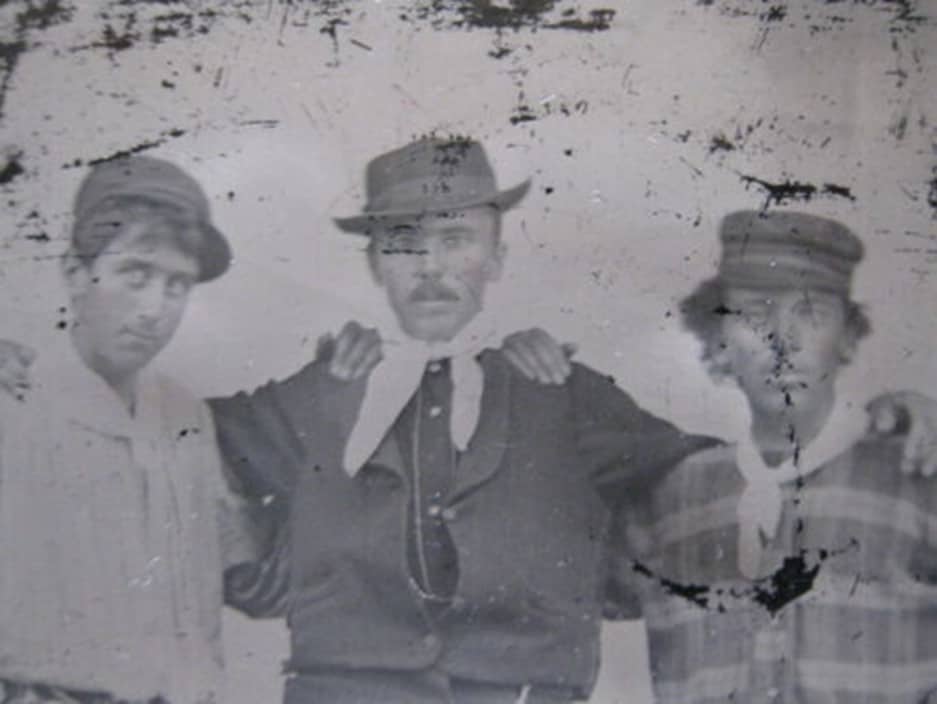 There is only one definite photo of Billy the Kid, the famous criminal, known to historians. Ever since that photo was discovered in a thrift store, many fake or exaggerated listings have cropped up claiming to be photos of the Wild West icon.

This listing may or not be real, but it claims to be a photo of Jim French, Jose Chavez y Chavez, and Billy the Kid standing next to each other (from left to right). The lister is asking investors and historians to verify their discovery by paying the asking price of $10,000,049.85.

The outlaw known as Billy the Kid fought in the Lincoln County War and became a gunfighter in his teens. He killed eight men in total as a wanted outlaw in the Old West before being shot and killed himself. He was 21 years old. To date, only one photo of him is known to exist. 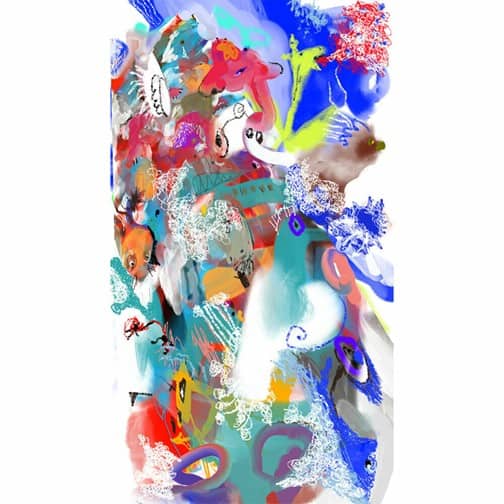 There’s not much to say about this 2020 abstract expressionist painting by the Korean artist, Hooranky Bae. It was painted on digital paper first and then had acrylic added to it. It ships (for an additional $6,766.50) without a frame. It is described as “rhythmic” and “harmonious” in the listing and is signed by the artist. The title is just its production date, including the time.

Abstract expressionism became a recognized movement in the 1940s in America. Its features include non-figurative designs, visual brushstrokes, and non-traditional marks. Jackson Pollock, Willem de Kooning, and Mark Rothko are well-known pioneers of the style. 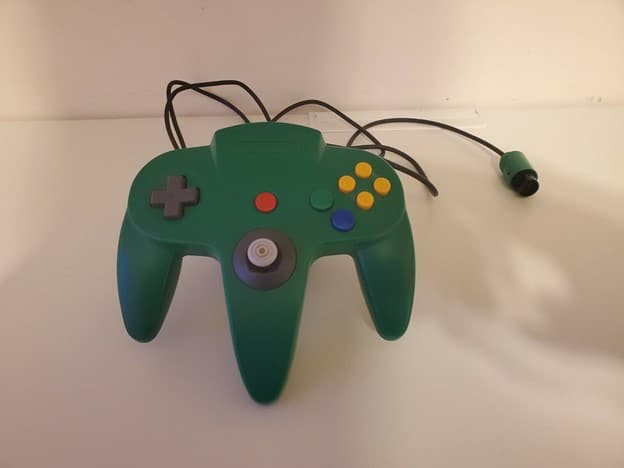 Stores like Blockbuster used to have video game display kiosks for people to play before they rented games. According to the item description, this N64 controller is from one of those video displays, put up by a former Blockbuster employee. Once the console’s lifespan was finished, Nintendo ordered the controllers and consoles returned. However, in this case, it seems a manager resold it as a used controller to one of their employees.

This means that these controllers don’t exist, strictly speaking, since most were destroyed. According to the listing, this is only one of three examples known to have survived. It is listed for $21,000,000.00 or best offer.

Rumble functionality existed in the N64 era. However, unlike modern controllers, the N64 had a separate battery-powered rumble pack that you attached to the controller. However, this Blockbuster display controller had a rumble pack built-in for use in the stores, drawing power from the console rather than batteries. This makes it even more unique. 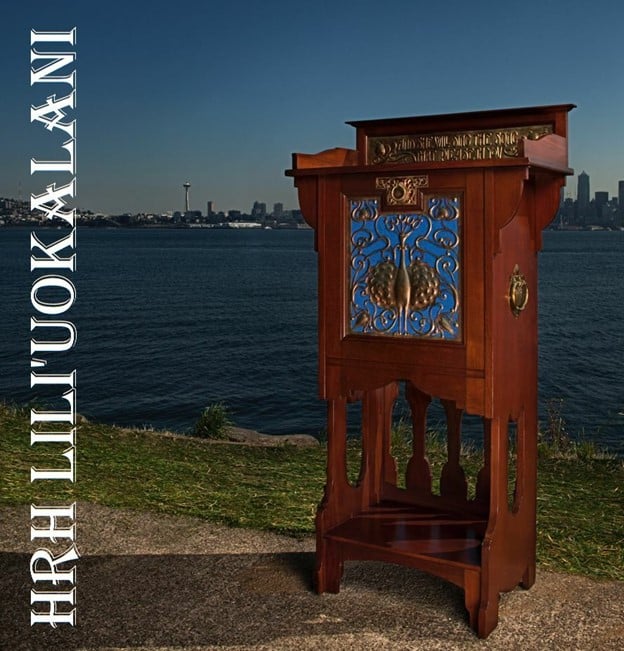 The item that we’ll just call the Honolulu Cabinet for short that’s currently on eBay for $21,000,000 is a genuine historical artifact. It is being sold from the estate of the late Barbara Cox Anthony, but its ownership goes back to Queen Victoria (1819-1901). It is best known however for being owned by Queen Liliuokalani of Hawaii.

It seems the cabinet was dropped off at a simple thrift store in 2006, eventually recognized by its crowned bird and Maunawili rose blossom design, the symbols of the queen and children of Hawaii, respectively. Victoria apparently had this cabinet crafted for Liliuokalani in the late 1800s.

The cabinet displays “Aloha ‘Oe,” which in Hawaiian means “Farewell to Thee,” which was a song written by Liliuokalani in 1878. It became the cultural anthem of Hawaii and representative of the changing conditions of her kingdom. You may recognize it as the love theme from Disney’s Lilo & Stitch. Additionally, if you look closely at the name, Liliuokalani, you can see the film’s main characters, “Lilo” and “Nani” mixed in. 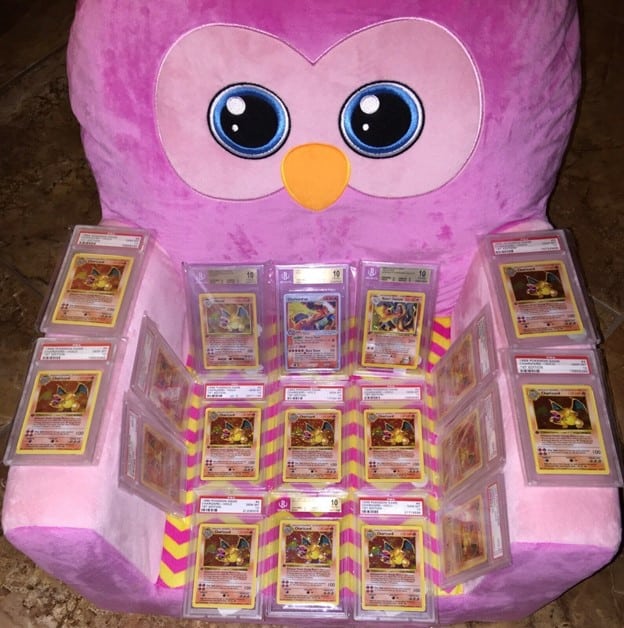 Naturally, a trading card was going to make it onto this list. However, this is a listing for 120 trading cards, all 1st edition Charizard Pokémon cards rated 9.5-10 by the PSA card graders. What is already known as one of the most valuable cards in the world is here given extraordinary value due to the breadth of this collection.

The listing includes 97 Charizards in perfect condition, as well as others that are Shadowless, 1st edition Base Set cards, and more. It’s unlikely that this many copies of this ultra-rare card have ever been assembled in one place, which is why the lister is charging a “Buy it Now” price of $21,000,000.00. Graciously, they have included the option to make an offer as well.

In the first released set of the Pokémon TCG, called the Base Set, this Charizard card was known as the game’s most powerful. They were sold individually for $150, then later for $1,000. Clearly, those prices have become outdated! The card was reprinted in subsequent sets, including Base Set 2 (Wizards of the Coast) and the Legendary Collection set, as well as a version with new art for the Stormfront card expansion. These other editions have only increased the value of the original. 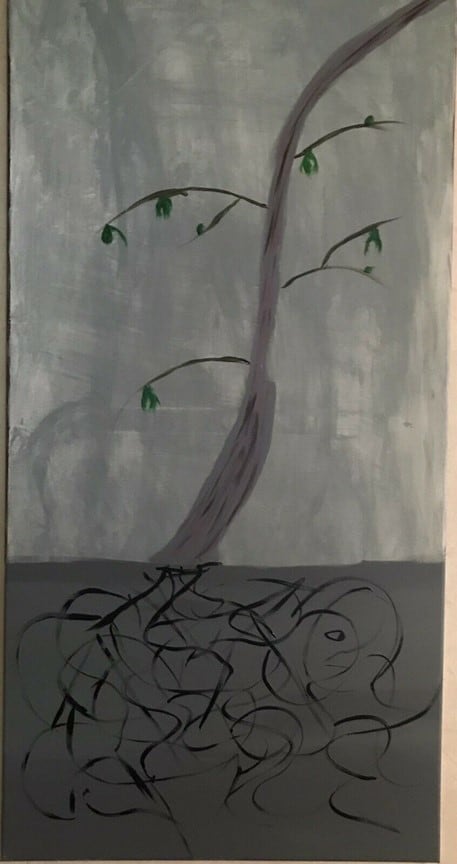 The most expensive thing on eBay is the Art Painting Original “Still Life.” This piece is dated 2020-2021 and is on a 24”x48” canvas. In the eBay description, its title is listed as “Remember The Ones That Have Past.” Though the painting is listed as being in the “abstract” style, since the tree and roots are stylistically representative of their real objects, the lister may have intended to say the “surreal” style. It was painted using acrylic.

At the time of writing, no one has bid on this painting, which is listed at a seemingly random price of $65,032,973 (including shipping). Paintings in general are very prone to being overpriced on eBay because no matter how amateur or expensive, a painting is still a one-of-a-kind item. On the off chance that a very wealthy browser thinks it’s worth it, many artists list their paintings for earth-shattering amounts.

A piece of Still Life art, or simply a Still Life, is a representation of objects that are sitting in front of the artist. The most typical examples of a Still Life are those paintings of fruit or cloth you can see at every art demonstration class in the world. The practice has origins in ancient Egyptian art and continued as a prevalent style in decorative art throughout the Roman, Medieval, and Renaissance eras, though it was not termed a painting genre until the modern-day.

While you may not be in the market for $65,000,000 amateur paintings, it’s still interesting to know what people are willing to sell for so much. Even still, some of the items on this list are genuine collector’s items and historical artifacts. You may want to add them to your watchlist, if for no other reason than to see what happens.