The U.S. is pretty middle-of-the-road when it comes to housing prices around the world, but that hasn’t stopped some American homes from getting very expensive.

America’s most expensive homes are often found in highly popular metropolitan regions like Los Angeles, California — but expensive houses can be found across the country. In Miami, Florida, the median house cost about $300,000 as of late 2020 — approximately double the cost in Akron, Ohio. Across the ocean in Honolulu, Hawaii, median prices jump way up to $605,000.

Even if those prices sound high, they’re nothing compared to the top 10 most expensive houses ever sold in the U.S. 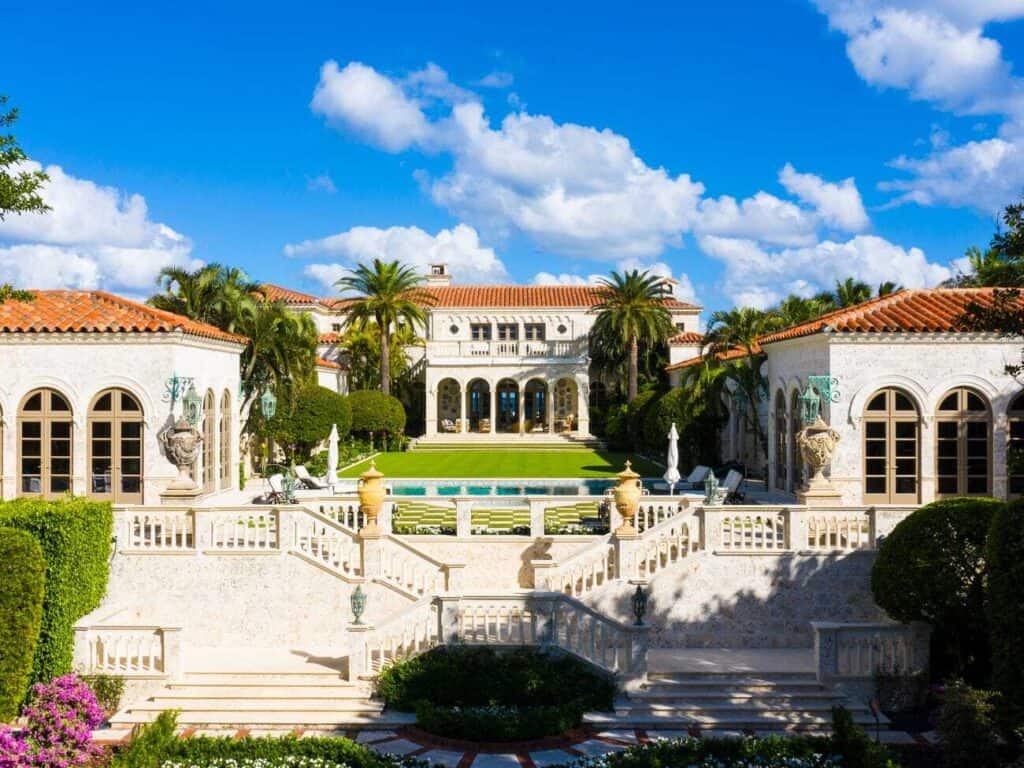 This huge mansion is situated on Billionaires Row, an area of Palm Beach, Florida filled with expensive houses and ultra-wealthy homeowners.

Reports say the sprawling mansion was once owned by Broadway producer Terry Allen Kramer, who is famous for producing iconic shows like Kinky Boots.

The Mansion on Billionaires Row sold for more than $110 million in 2019. According to Business Insider, the huge property offers private beach space, a boat dock, beautiful gardens, and multiple fruit orchards. Interestingly, the home is also a 10-minute walk from Donald Trump’s famous Mar-a-Lago club.

The Mansion on Billionaires Row is reportedly built in the Italian-Renaissance style. 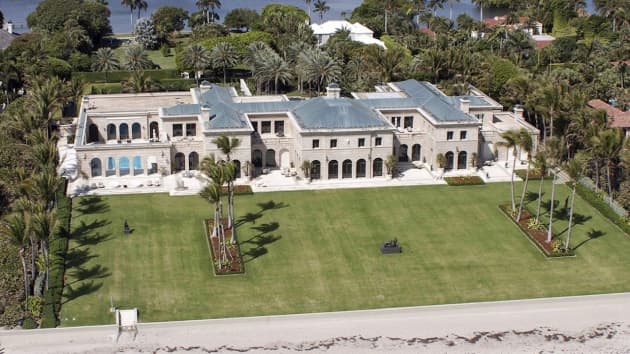 Palm Beach, Florida has seen some very expensive houses over the years, but few compare to this huge, 70,000-square-foot mega-mansion purchased for $111 million in 2019. The sprawling home was bought by billionaire Steven Schonfeld. Steven and his wife share the huge space with their three children.

Before its 2019 sale, the Palm Beach mansion was owned by hair-care mogul Sydell Miller.

Built in 2001, the mega-home has been called “French-style” and offers a 350-foot private beach as well as close proximity to billionaires like former President Donald Trump and businessman Ken Griffin.

The southern Florida housing market is very expensive. According to one report, the average home price in Miami reached a record $330,000 in 2019. 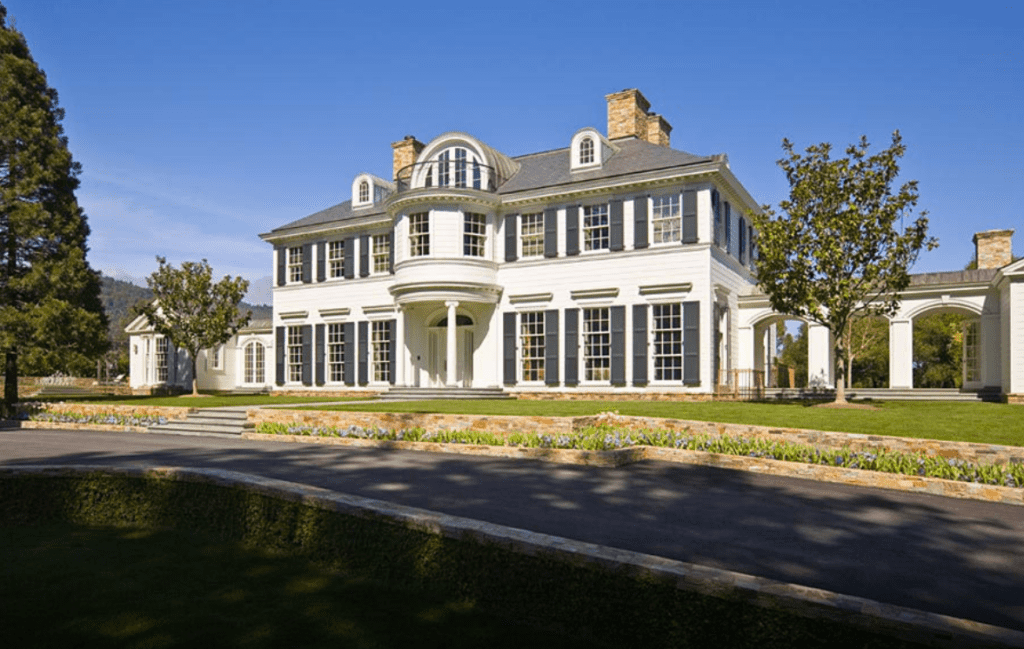 In late 2012, an anonymous buyer purchased the estate at 360 Mountain Road — a huge home with more than 9,000 square feet of living space and 360-degree views of the Woodside Mountains.

Although details about the massive home are limited, reports say the record-setting house never made it to the public market. Instead, the home was sold privately for a whopping $117.5 million.

According to Business Insider, the huge house was previously owned by Tully Friedman, an American businessman who worked with an investment firm in San Francisco.

According to one report, this house was originally listed for $132.5 million. 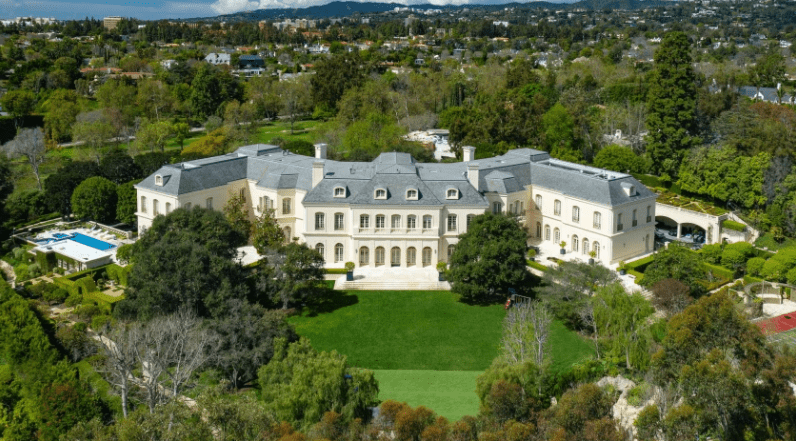 Known simply as The Manor, this huge 56,500-square-foot house sits on nearly five acres and features more than 20 rooms — including a dedicated flower-cutting room.

The Manor was built in 1991 for producer Aaron Spelling and his wife, Candy Spelling. Candy eventually sold The Manor to Petra Eccleston for $85 million. Later, the house sold for its record-setting price of nearly $120 million in 2019.

Throughout its history, The Manor has seen a host of expensive lifestyles, including that of one owner who employed a staff of 30 people to run the massive estate.

The Manor was known as Candyland when Aaron and Candy Spelling lived there. 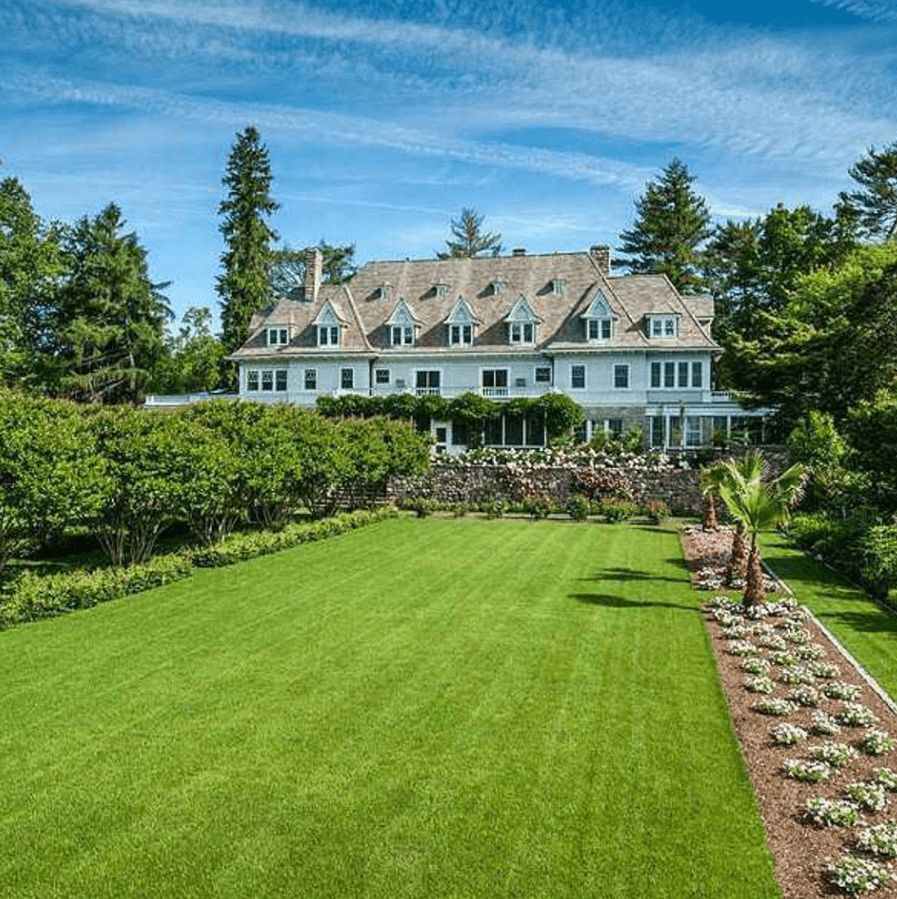 Known as Copper Beech Farm, this massive estate features 50 acres and a house with 12 bedrooms. Inside you’ll find a wood-paneled library, seven full bathrooms, and fireplaces in most of the bedrooms.

Unlike some houses on this list, Copper Beech Farm has a very long history. The home was built in 1896 before getting sold to Harriet Lauder Greenway in 1904. Harriet lived on the property for more than 75 years, then the house was purchased by timber tycoon John Rudey in an off-market sale.

Eventually, in 2014, the massive estate sold for a record-setting $120 million, less than the original asking price of $190 million.

This house was sold through an affiliate of Christie’s International Real Estate. Although the company confirmed the sale, the buyer remains anonymous. 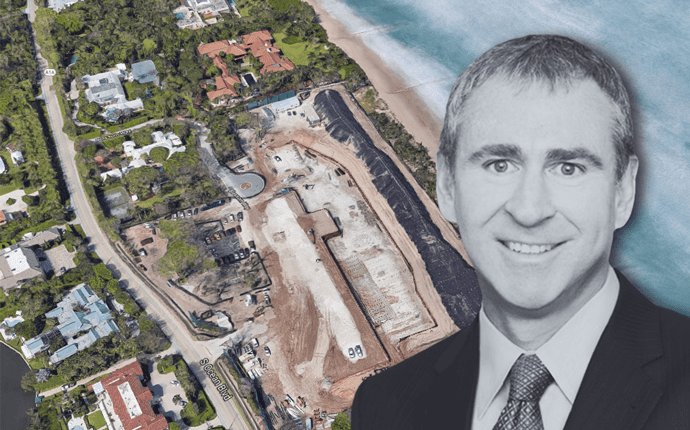 The history of Ken Griffin’s Palm Beach property is a little complicated. The huge spread of land was bought over the course of several years, but his first big purchase was in late 2012 when he spent $130 million on a set of four adjacent properties.

Ken has added to his collection of land in Palm Beach over the years — most recently he bought a 3.6-acre ocean-front estate in 2019 for an unknown sum.

Although details about the ultra-wealthy buyer’s property are limited, it’s safe to say Ken has plenty of space to relax by the ocean.

As of early 2022, Ken Griffin was the 84th richest person in the world. 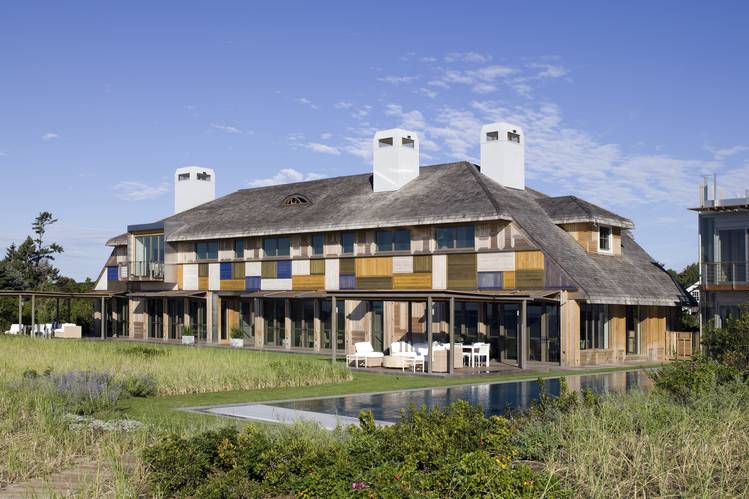 When you’re as rich as Barry Rosenstein, buying a $137 million estate in the Hamptons isn’t that crazy. The billionaire purchased his large New York home in 2014, securing 18 acres of land designed by Christopher Browne and Andrew Gordon, a wealthy couple that made millions on the stock market.

According to Forbes, Barry makes $140 million a year, so he could definitely afford the sprawling property. 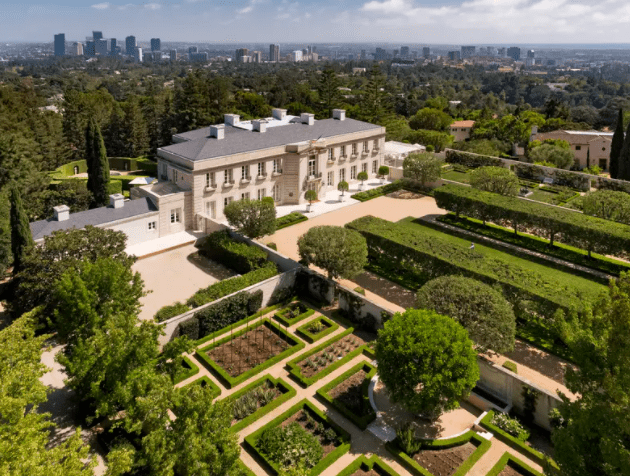 In 2019, Ruper Murdoch’s son purchased a 26-room mansion in LA. The massive house sits on a 10-acre estate with crazy features like a 75-foot pool, a guest house (which is arguably a second mansion), and views of the Pacific ocean.

Oh, and there’s an underground tunnel running from the home’s basement to the swimming pool.

Interestingly, this mansion was featured in the classic TV show The Beverly Hillbillies during the opening credits.

This huge house originally hit the market with a price tag of $350 million and was the most expensive home sold in California until Jeff Bezos purchased his LA mansion. 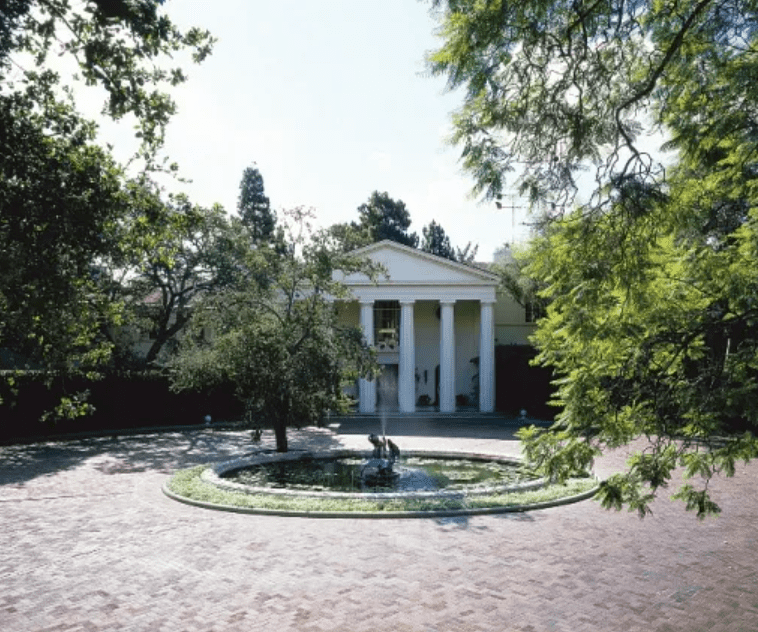 Jeff Bezos is famous for being one of the richest people in the world and the founder of Amazon, but did you know he also holds the record for the most expensive home purchased in California?

Jeff bought his mega-mansion in 2020. The 13,600-square-foot home was originally designed for Jack Warner of Warner Bros. in the 1930s before media mogul David Geffen purchased it in 1990.

Interestingly, Jack Warner developed his huge estate over the course of 10 years, only building additions when “changes in his business affairs and personal life” demanded it.

One massive mansion might be enough for most people, but Jeff Bezos actually owns a real estate portfolio totaling $500 million. Besides his LA home, Jeff’s properties include several floors of a highrise in New York City, a $23 million home in Washington, D.C., and a sprawling complex in Medina, Washington — just to name a few. 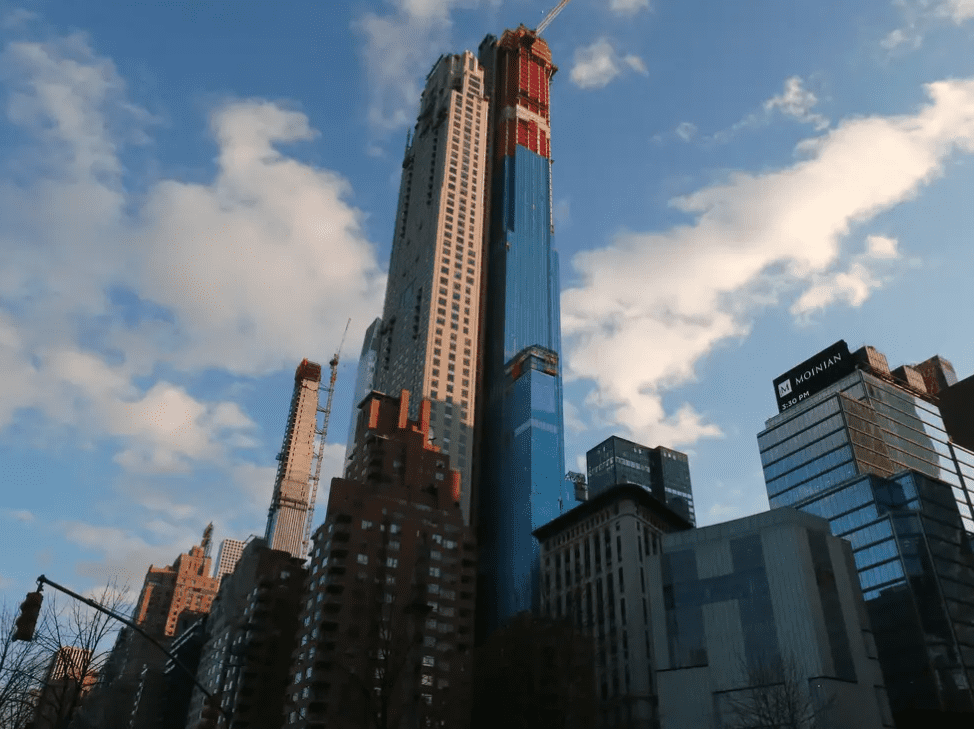 The Penthouse at 220 Central Park South is the most expensive house ever sold in the U.S.

In 2019, billionaire Ken Griffin purchased the most expensive house in America. The 24,000-square-foot mega home spans floors 50 through 53 of a New York skyscraper. Incredibly, in the same week that reports emerged of Griffin’s record-setting purchase, other sources said the billionaire paid $122 million for another home in London. Before that, Griffin paid $60 million for a house in Miami Beach.

Although there aren’t any reliable reports on how many rooms this massive penthouse holds, it’s safe to assume the huge home has enough space for Griffin to stretch his legs.

According to the Chicago Tribune, Griffin (who is worth an estimated $21 billion as of 2021) donated $53.75 million to the Coalition to Stop the Proposed Tax Hike, a group opposed to a proposal that would have increased income tax for top earners in Illinois.