The history of guns starts more than 1,000 years ago with the invention of gunpowder. Experts think this event may have taken place in China as people hunted for “an elixir of life.” One Chinese alchemist documented the dangerous properties of this new concoction, describing “smoke and flames” as well as the burned faces of those developing the mixture.

Gun powder (which was first known as black powder) was originally used for fireworks. But over time, the substance made its way into weaponry, resulting in early gunpowder-powered machines like cannons.

As Europe, Asia, and colonial America became more connected through trade, ancestors of modern guns became more common across the globe. As a result, new inventions were created — morphing early exploding weapons into the firearms we know today.

In today’s world, the most expensive guns are typically rare symbols of historical events. Guns used by important figures like American presidents and soldiers can sell for thousands if not millions of dollars.

Learn more about the most expensive guns ever sold with this top eight list. 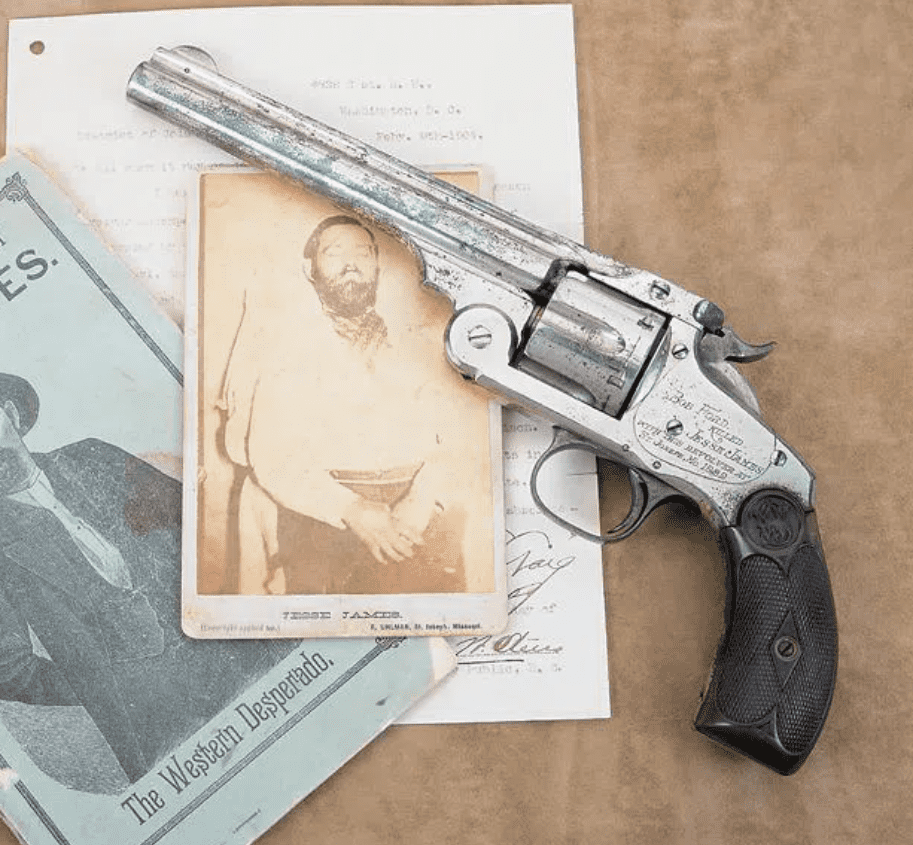 Jesse James was born in Clay County Missouri in 1847. As the son of a slave owner, James joined the Civil War in support of the Confederacy in 1864. During the war, James participated in the Centralia massacre (a bloody event resulting in the death of 22 unarmed soldiers by Confederate hands) and many other atrocities.

After the Confederacy lost in 1865, James continued to wreak havoc across the States, starting with the robbery of a bank in which an unarmed cashier was killed.

Over the years, James and his gang continued to rob and murder across the country. In 1873, James led the world’s first robbery of a moving train — injuring several passengers and killing the engineer. James tried to paint himself as a “Robin Hood” figure, but the outlaw’s legacy is defined more by murder than concern for the poor. 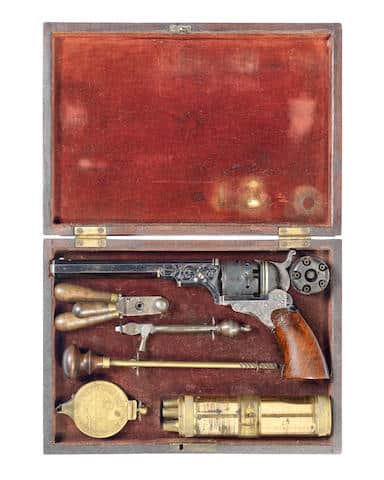 Samuel Colt is considered one of the most revolutionary gun makers in the United States. The inventor and designer won the groundbreaking patent for a revolving mechanism that allowed multiple rounds to be loaded into a single hand-held gun — a big change from previous firearms that only loaded a single bullet at a time. Similar inventions were created before Colt’s, but Colt’s design significantly improved upon the function of these earlier versions.

In December 2020, a rare example of Colt’s design was sold at an auction held by Bonhams. The weapon commanded an intense bidding war, pushing the price to nearly $360,000. The firearm itself features an engraving on the barrel pointing to its origin and was sold alongside its original case. The case, the gun, and its accessories are thought to be from around 1840.

Samuel Colt received a British patent for his design before earning an American patent. 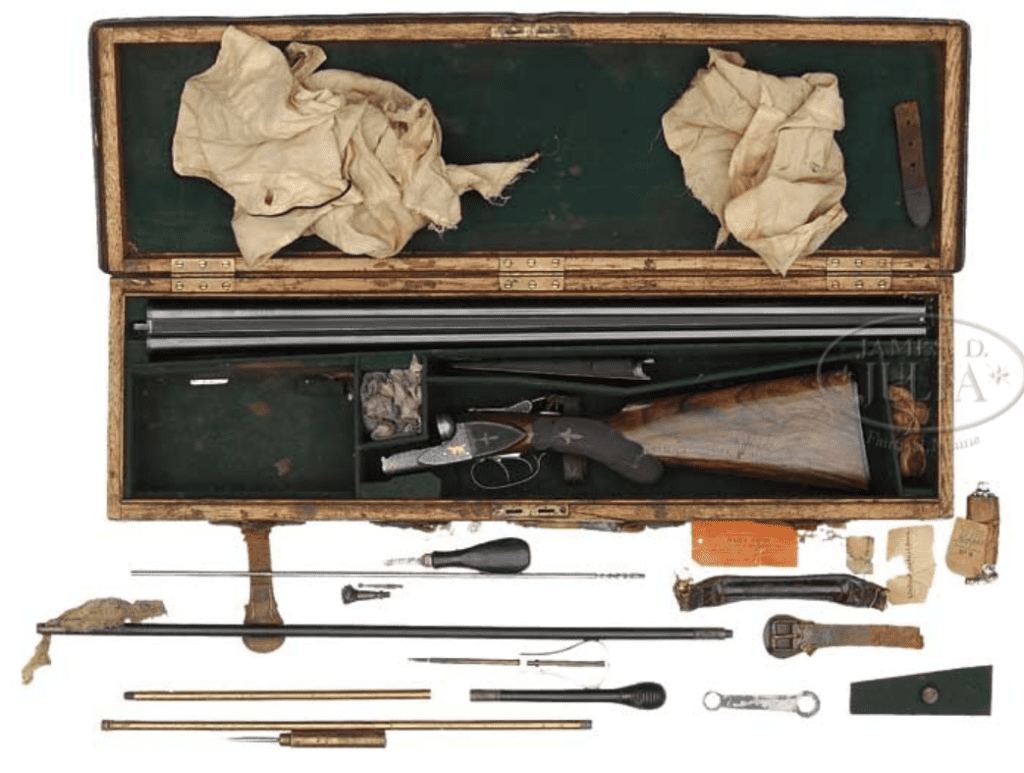 Theodore Roosevelt (or Teddy Roosevelt) was born in 1858 in New York. In 1897, William McKinley became President of the United States and Roosevelt served as the vice president. Just a few years later, in 1901, McKinley was assassinated and Roosevelt ascended to the presidency.

In 1909, Roosevelt traveled to Africa to hunt and collect specimens in collaboration with the museum of the Smithsonian Institute. Before the trip, Roosevelt was given a shotgun by the Fox Gun Company. The gun was used by the president during his expedition before it was passed along to his son after Roosevelt’s death in 1919.

In 2010, Morphy Auctions offered the one-of-a-kind gun to bidders during its fall firearms sale. The auction ended with a final price of $862,500, making Roosevelt’s shotgun the sixth-most expensive gun ever sold.

Theodore Roosevelt is known for expanding the powers of the president’s office.

John Reese Kenly was a lawyer and member of the Union Army born in 1818. Before the Civil War, Kenly fought in the Mexican-American War (1846 – 1848). Born in Baltimore, Maryland, Kenly served as colonel of the 1st Regiment Maryland Volunteer Infantry, which was organized in his hometown.

At some point during his life, Kenly received Sam Wilson’s handgun. The gun has a K carved into the grip for Kenly, and the auction house that sold the gun said the firearm was accompanied by documents proving its authenticity.

Kenly is buried in Baltimore, Maryland at the Green Mount Cemetery. 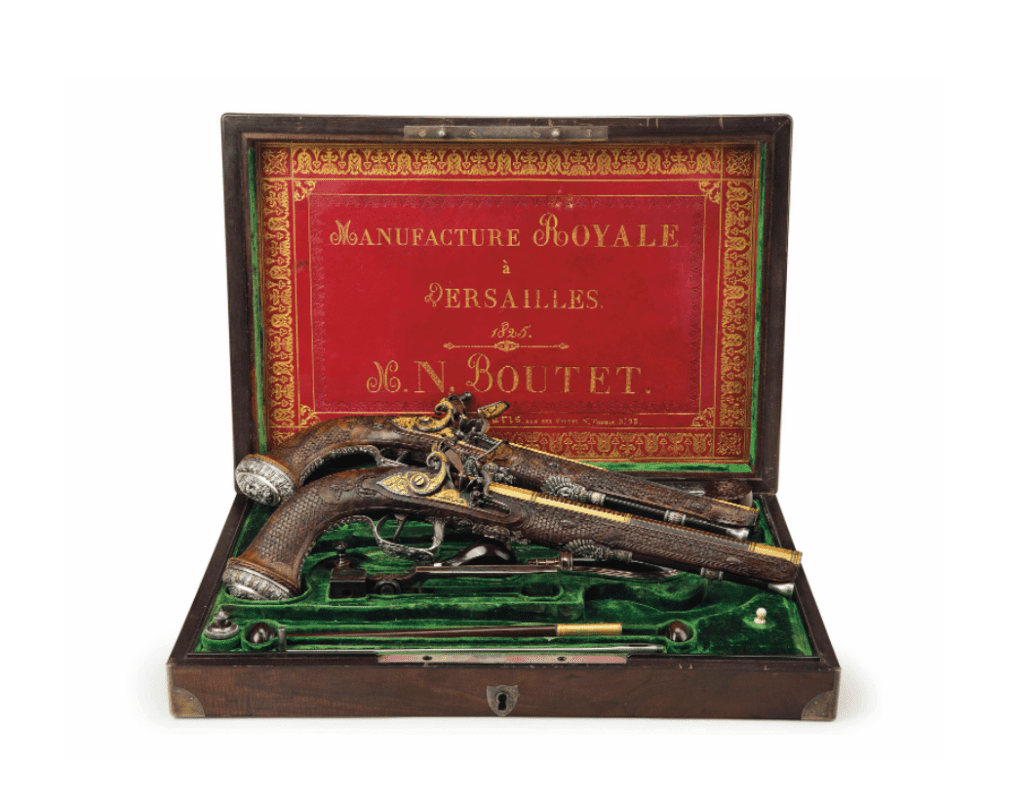 Nicolas-Noël Boutet was Napoléon Bonaparte’s official gunsmith (a person who makes and repairs firearms). This particular set of guns was made in 1825, about four years after Napoléon’s death.

In 2016, Christie’s auction house sold Boutet’s guns for over $1,800,000. That high price tag was the result of the guns’ historic value. This wasn’t the first time a weapon connected to 19th century France sold for more than a million dollars — in 2007, Napoléon Bonaparte’s personal sword sold for a record $6,400,000.

Napoléon Bonaparte was a French military leader and emperor. Bonaparte came to power in 1799 and crowned himself emperor a few years later. The ruler held France and much of Europe in his grip until around 1815 when he was exiled. Bonaparte eventually died at the age of 51.

Estimated Value: $1,840,000
Brand or Maker: Colt
Time Period: The 19th century
Interesting Fact: The maker of this gun promoted his creation in a conversation with President James K. Polk 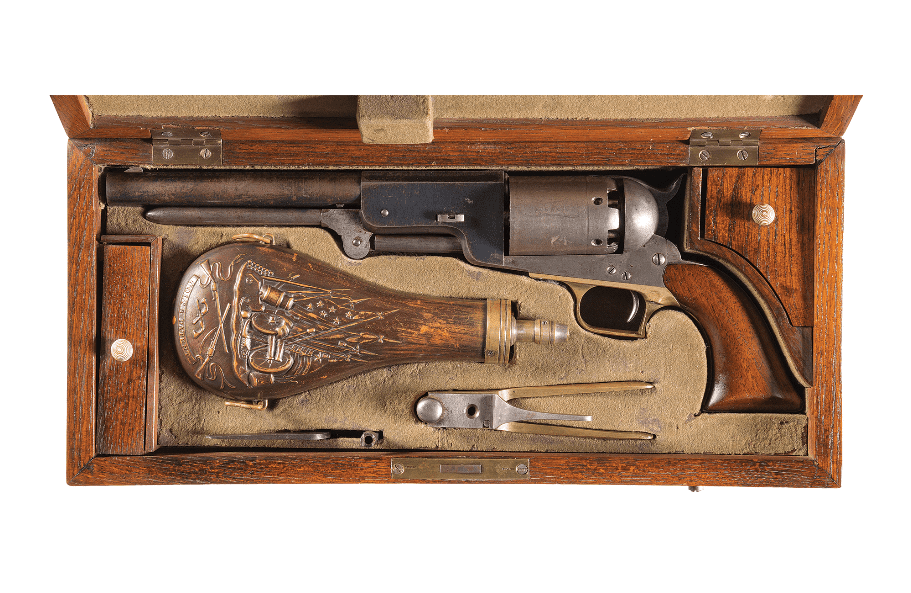 This handgun from the 19th century was made by Colt, the gun manufacturer run by Samuel Colt who patented a groundbreaking revolver system. In mid-April 2018, Rock Island Auction Company sold the rare gun for $1,840,000, making it the third-most expensive firearm ever sold.

After a meeting with President James K. Polk, Samuel Colt secured a deal to provide the military with 1,000 revolvers. Soon after, Colt made a special line of just 100 revolvers for civilians. This gun is number 22 from that ultra-limited line.

Colt decided to make a limited line of civilian revolvers to promote his company. 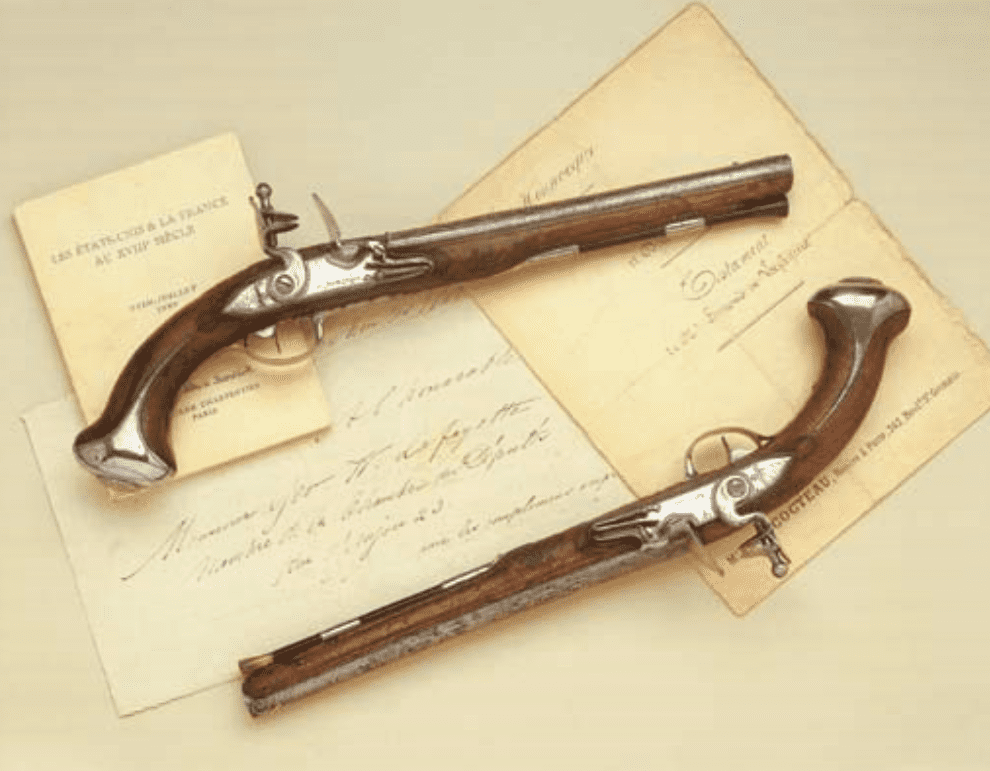 Coming in at number two are George Washington’s personal guns. The Founding Father’s pistols were given to him by Marquis de Lafayette during the Revolutionary War (1775 – 1783).

After George Washington died in 1799, these guns were inherited by William Robinson, a relative of Washington. The guns were eventually gifted to Andrew Jackson in a show of support for his campaign for the presidency.

These guns were owned by many other people over time, but one of the most recent sales occurred in 2002 when the duo sold at auction for a record-setting $1,986,000. 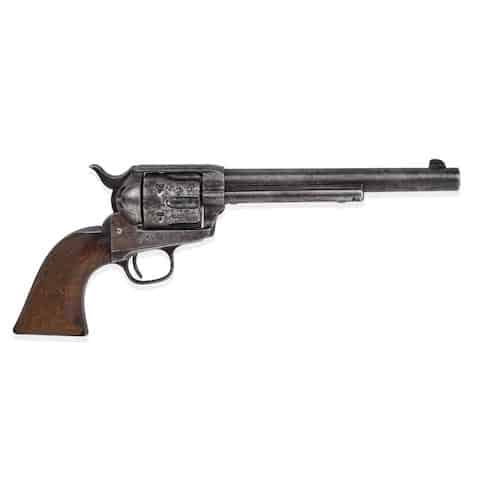 The gun that killed Billy the Kid is the most expensive gun ever sold.

On July 14, 1881, Sheriff Pat Garrett finally caught and killed Billy the Kid. Billy was an outlaw who murdered at least 27 men before his death at the age of 21. Sheriff Garrett had caught Billy once before, but the outlaw escaped custody after he was found guilty of murder and sentenced to hang. After Billy’s escape, Sheriff Garrett tracked Billy down and shot him to death in New Mexico.

8 Most Expensive & Valuable Pennies Ever Created