Since their creation over 5,000 years ago, swords have been a hallmark of historical battles and powerful leaders. Amazingly, swords stood the test of time and remained the go-to weapon for several thousand years despite changing cultures and shifting conflicts.

In fact, swords have been present at a variety of important events in history. From the Battle of Hastings in 1066 to Napoleon’s attack on Austrian forces in 1800, bladed weapons have been a defining characteristic of history-changing events even through the mid 20th century.

Although the sword has been replaced by guns and drones on modern-day battlefields, the weapon remains an important part of many cultures. In 2020, a man named Tom Moore was knighted by Queen Elizabeth in honor of his efforts to raise money for his country’s health care system during the COVID-19 pandemic. During the ceremony, the Queen used a special knighting sword to officiate the honor.

Now, as this weapon leaves the battlefield and joins a more ceremonial place in society, many historic swords have been put up for sale — and sometimes, the amount people are willing to pay for these sharp objects is staggering. 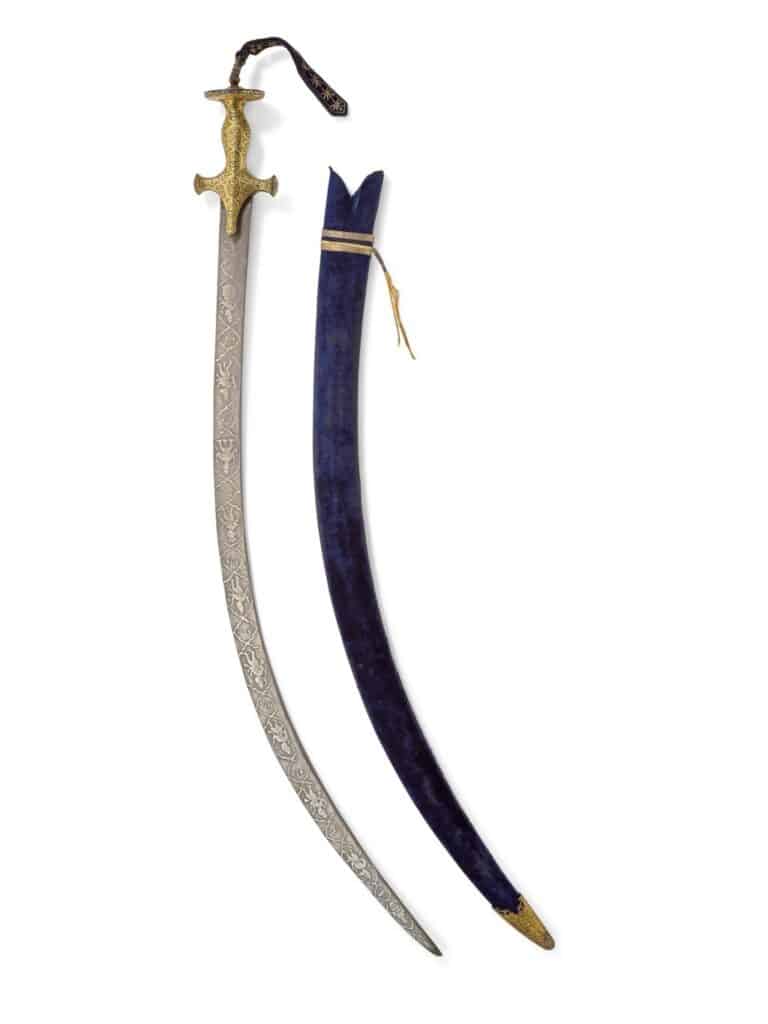 This 19th-century sword from India sold for $10,423 alongside its scabbard. The curved blade features the ten avatars (or the ten forms) of Vishnu, an important deity in Hinduism.

During the height of their use, these swords — also referred to as talwar — were used by a wide range of people in India. Although they’re similar to other swords, the talwar was often defined by its curved blade and steel hilt (the handle and hand-guard section).

Although they’re no longer commonly owned by the Indian public, talwar are still used in traditional weddings and festivals across the country.

This sword is made from watered steel. This type of metal has a fine surface pattern that looks like waves as a result of the creation process. 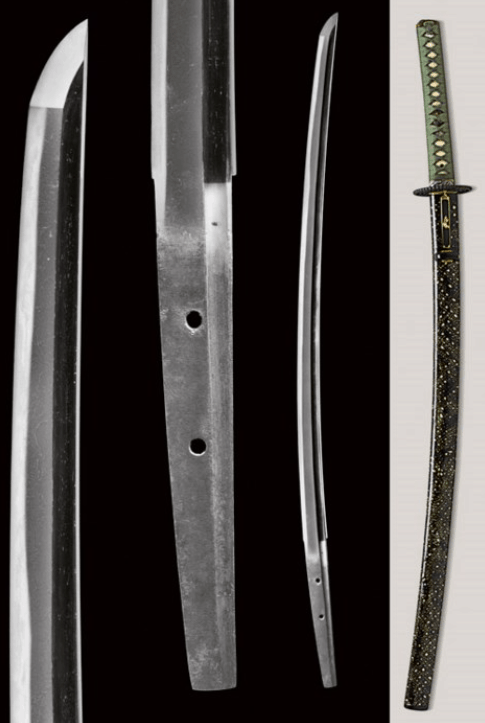 In 2007, Christie’s auction house sold a Yamato Katana in Mounts from the 1200s — making this sword over 700 years old. The sword fetched a whopping $23,750, more than the $15-20 thousand Christie’s expected. Experts say the sword came from the Taima school of swordsmiths in Japan.

Often, the swords designed by this school were commissioned by monks and had thinner blades, so they were rarely signed by their creators.

The Taima school has roots in Japan dating back between 1288 and 1317. Although the school remained active until the end of the 1300s, only a few Taima school swords survived the centuries.

Between the 7th and 19th centuries, Japan was divided into two distinct provinces. During that time, an area near present-day Kyoto was known as Yamato. Today, the region is called Nara Prefecture. 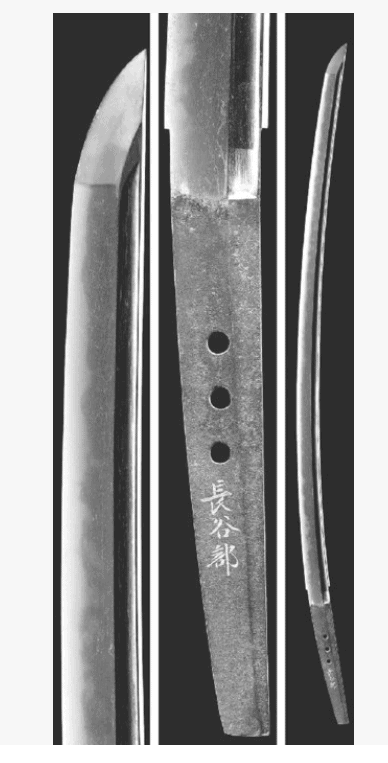 Christie’s auction house sold this sword from the 1300s for 69,162 dollars. The impressive blade features a gold inlay signing the designer’s name.

This sword is believed to have been made by a student at the Sosho School under the guidance of Masamune, a medieval blacksmith who is considered Japan’s greatest swordsmith.

When Christie’s sold this Sosho School Katana, experts said the blade was made by Hasebe Kunishige, a swordsmith who likely lived near modern-day Kyoto. The style of the sword is thought to reflect the Nanbokucho Period, a time when two competing family lines claimed the imperial throne.

When Hasebe made swords, he often signed the finished blade and included the date of completion.

Price: $100,000+
Country of Origin: Britain
Time Period: The 1800s
Unique Feature: Inscribed with the words “England expects every man to do his duty.” 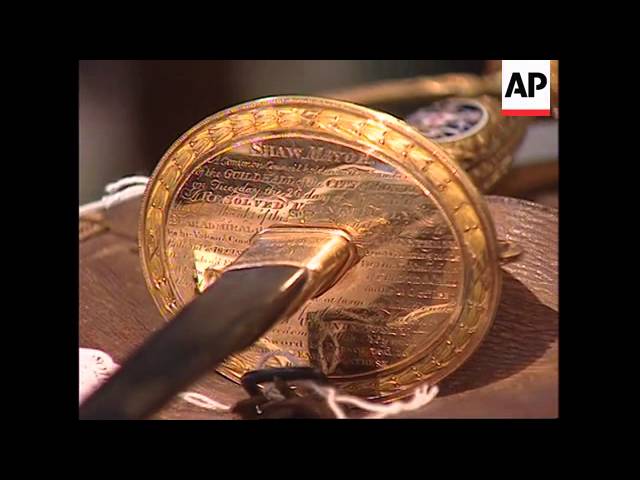 Although the exact sale price of this extremely rare sword is unknown, Sotheby’s auction house said it went for over $100,000 according to reports from 1994. The sword was part of a privately owned collection containing some of the rarest war memorabilia from the 19th century.

In 1805, Lord Northesk of Britain joined the attack against Napoleon’s rule in the Battle of Trafalgar. After defeating the French, Lord Northesk was awarded this gold-encrusted honorary sword that would go on to join the ranks of the most expensive swords ever sold.

At the same auction which sold Northesk’s sword, an Admiral’s Gold Medal was also sold. The rare item earned a record £106,000. 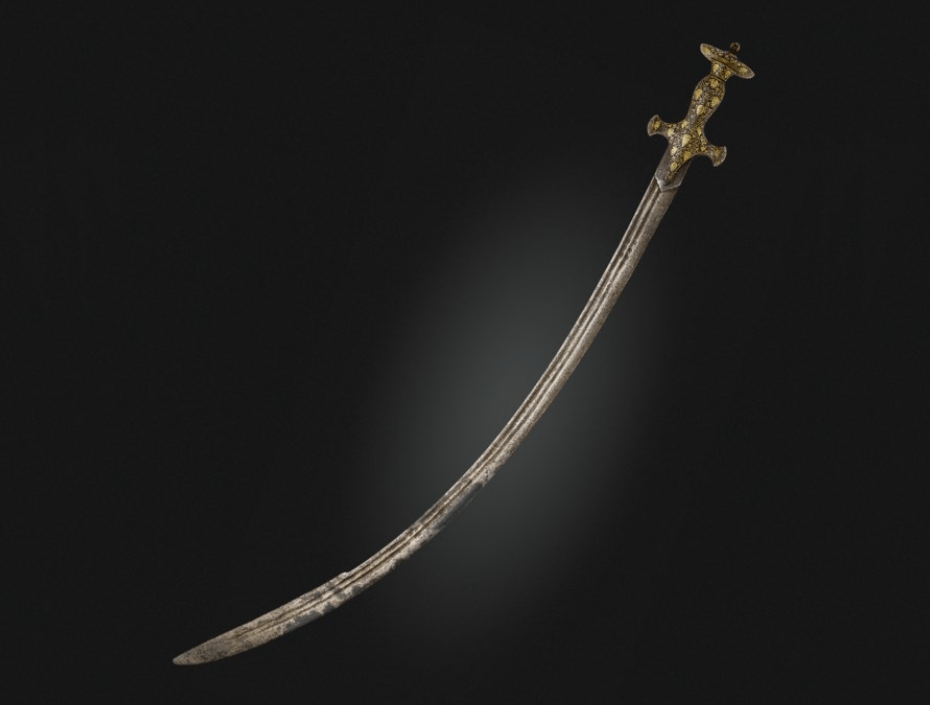 In June 2019, a sword owned by India’s 17th-century emperor Shah Jahan was sold by Christie’s for a crazy $275,000. The steel blade featured gold accents and was actually made somewhere in Europe, not India.

Often, swords like this were called firangis when they originated from Europe.

According to experts, this sword was altered during its lifespan to have a single-edged blade and a double-edged tip — a sharp surprise for anyone unlucky enough to find themselves on the wrong side of this rare weapon.

As emperor of India in the 1600s, Shah Jahan is known for a lot of things. But most notably, his reign is often defined by the completion of the Taj Mahal. The building was created in memory of Jahan’s wife, Mumtaz Mahal. 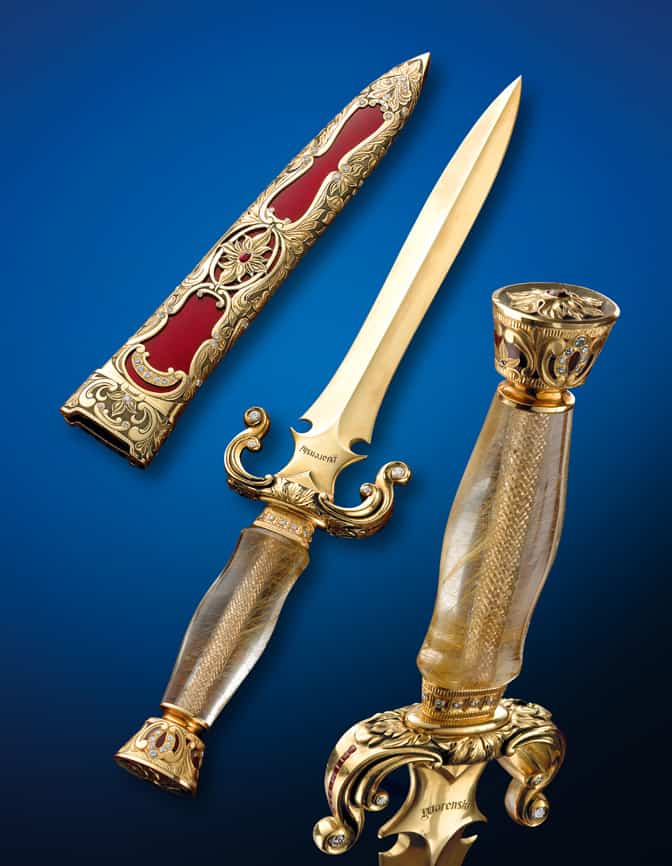 Completed on an unknown date after 1975, this small sword incorporated 153 emeralds and nine diamonds alongside gold details and a jade handle. Designed by artist and blade-maker Buster Warenski of Nevada, the piece sold for an incredible 2.1 million dollars.

The Gem of the Orient was part of a three-sword series referred to as Buster’s “Legacy Knives,” a collection of intricate designs using rubies, diamonds, gold, and other rare materials. Despite their time-consuming attention to detail, Buster made his blades entirely on his own. This impressive work would come to be known as “Art Knives” by his fans.

Although Buster Warenski made a variety of impressive knives and swords, he’s most well-known for his recreation of a dagger found in King Tut’s tomb. Using 32 ounces of gold, the priceless blade took five years to complete. 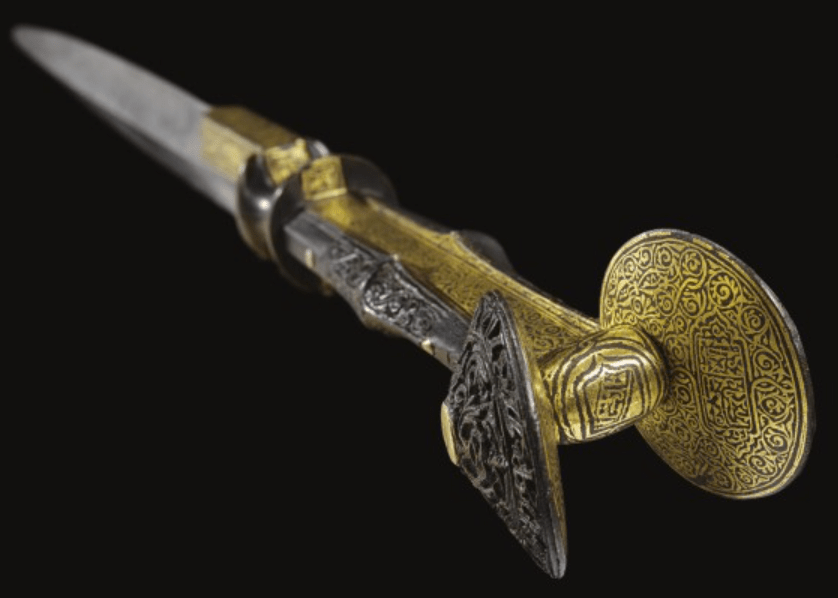 Selling for $5.1 million, this ear-dagger was one of many used in Spain during the 15th and 16th centuries. The blade was sold by Sotheby’s, marking another step in the history of ear-daggers among high society. In fact, this type of blade was so commonly used among noblemen of the 1500s that a portrait of King Edward VI found in Windsor Castle features an ear-dagger.

The Renaissance-era dagger gets its name from the distinct, ear-like shape of its hilt.

According to experts, ear-daggers likely originated in North Africa. This particular ear-dagger is associated with the Battle of Lucena — a clash between Christian forces from the Crown of Castile (which would become modern-day Spain) and Muslim forces from Nasrid Emirate of Granada (a coastal region near the Mediterranean sea).

This rare ear-dagger has Arabic and Latin inscriptions on the “ears,” but time has worn them down so no one is sure what they say. 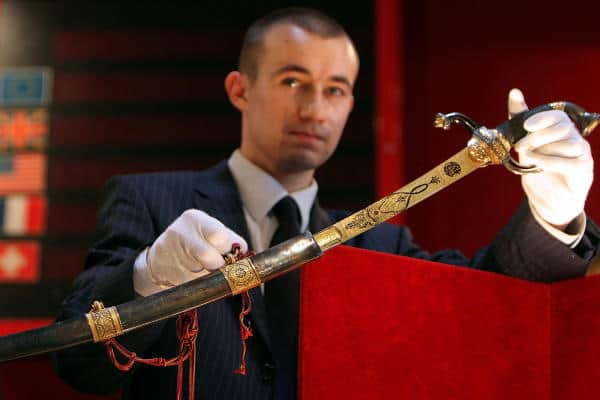 Napoleon Bonaparte’s blade is the most expensive sword ever sold. At 32 inches long, the sword was made in Italy well over 200 years ago. In 1978, the blade was declared a national treasure by France. This requires the sword to spend at least five months in France each year.

Held by Napoleon in the year 1800 during his surprise attack on the Austrian army, this incredible sword sold for 6.4 million dollars in 2007. Although the buyer was not identified, the auction house responsible for the sale said it would remain in the Bonaparte family, building on the tradition Napoleon started when he gave the sword to his brother as a wedding present.

According to Osenat Auctions, the blade has a distinct curve and gold-encrusted elements. These features were inspired by Napoleon’s invasion of Egypt and Syria from 1798 to 1801. During that time, Napoleon reportedly made efforts to take over eastern regions in his effort to eventually conquer all of Europe.

When Napoleon’s sword sold in 2007, applause broke out in the auction hall. Interestingly, the hall was located just across the street from one of Napoleon’s imperial castles.