Private jets are a luxury item completely inaccessible to the average person. These fully customizable planes come with hefty upfront price tags and cost thousands of dollars to maintain. The cost to fuel a private jet ranges from just over $500 per hour to nearly $2,000 per hour. Additionally, the price to fill a private jet from zero to full can cost from around $2,000 to over $30,000.

All of the the most expensive private jets in the world are worth hundreds of millions of dollars. The top two most expensive planes cost over half a billion dollars! Of course, these luxury private planes are owned by some of the richest people in the world, including the Sultan of Brunei and a few Russian billionaires. 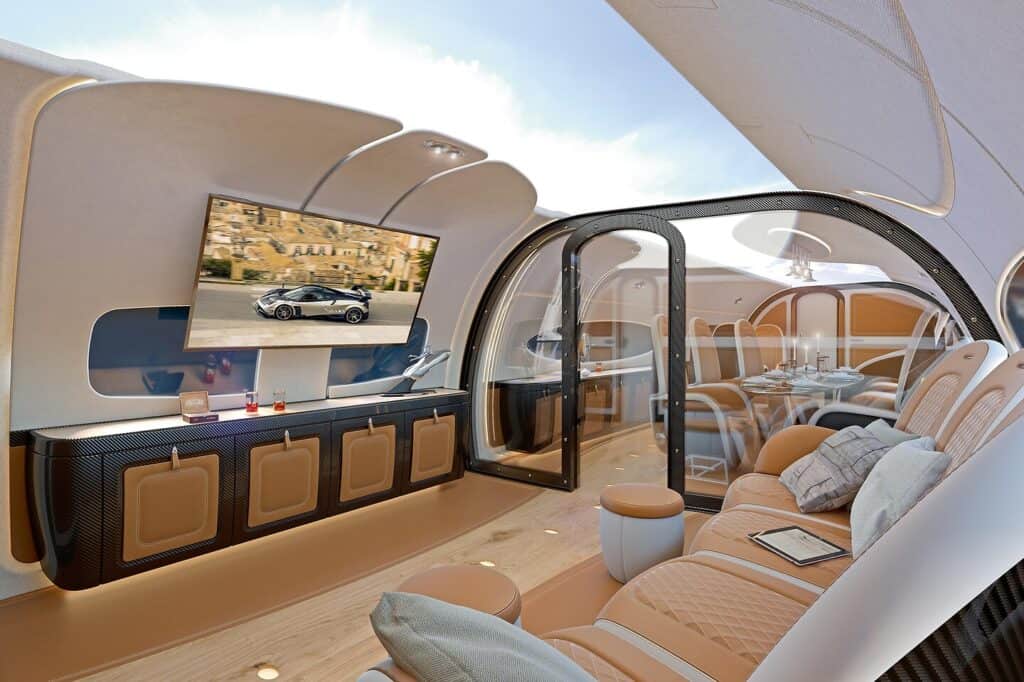 In 2017, Airbus and Atelier Pagani Automobili revealed the Airbus ACJ319NEO Infinitio. The luxury cabin interior was designed by Pagani and reflected the interior of its luxury supercars. The centerpiece of the Infinitio design is the sky ceiling, which displays a live view of the sky above the aircraft without the need for a massive glass roof.

The interior of the Airbus ACJ319NEO Infinitio features leathers, woods, and carbon fiber. The design is similar to the inside of a Pagani Huayra. The Infinito interior is split into multiple segments such as a theater room, a dining area, and a lounge.

The Airbus ACJ319NEO Infinitio can carry passengers over nearly 7,800 miles or 15 hours non-stop. 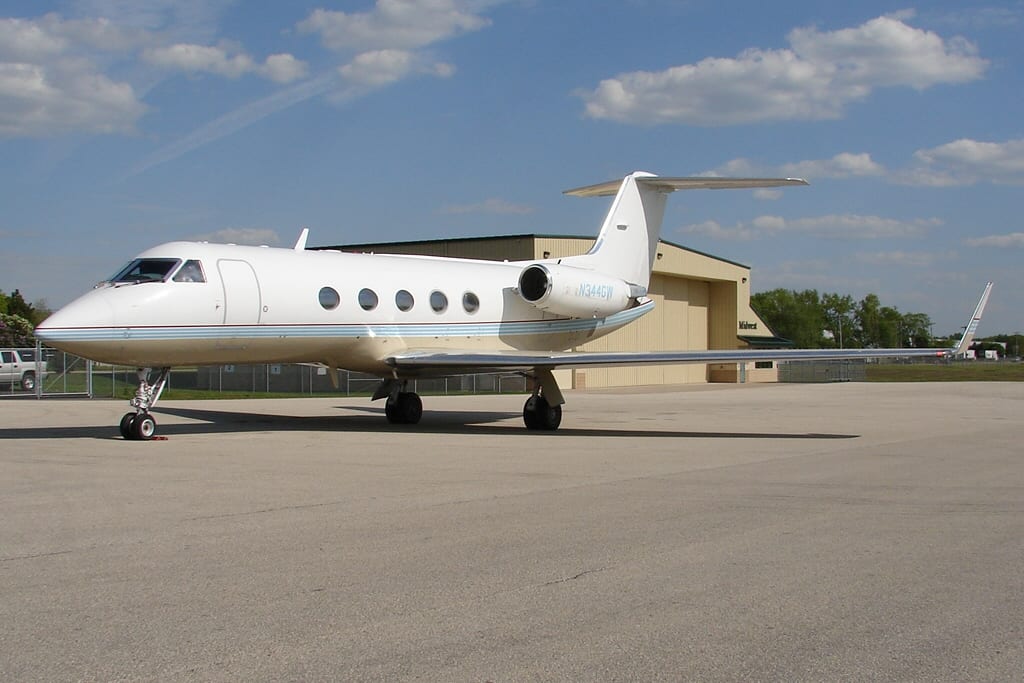 While the Gulfstream III is much smaller than some of the other expensive private jets on this list, it isn’t any less extravagant. One custom Gulfstream III, owned by filmmaker Tyler Perry, is worth $125 million and features some of the best amenities that money can buy. Perry’s Gulfstream III features satellite TV, a formal dining room, and a modern kitchen.

Besides luxury private jets, there are several military variants of the Gulfstream III. The U.S. military owns numerous specially made Gulfstream III planes. Some of these special military features include modified communications equipment and a stretched fuselage/redesigned wing. 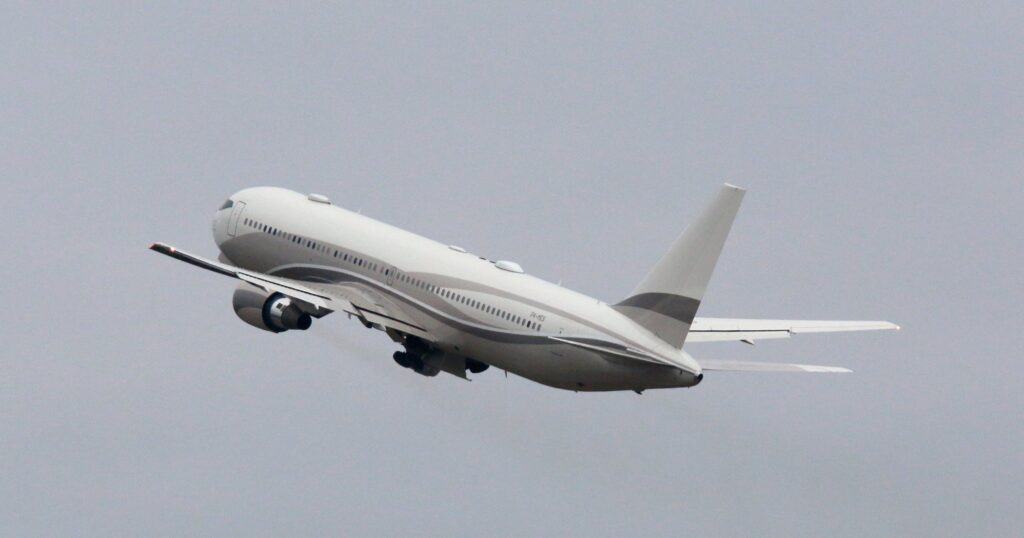 Russian billionaire Roman Abramovich is the owner of a luxurious Boeing 767-33AER. The custom plane is valued at $170 million and features a banquet hall for 30 people. The interior of Abramovich’s Boeing 767-33AER was designed by British yacht designer Andrew Winch. The plane’s interior features chestnut furniture, a full kitchen, an office, and, of course, a bedroom with a double bed and ensuite bathroom, all with gold trimmings.

Roman Abramovich’s Boeing 767-33AER is nicknamed “Bandit” because of the black stripe painted around the cockpit window that resembles a mask. 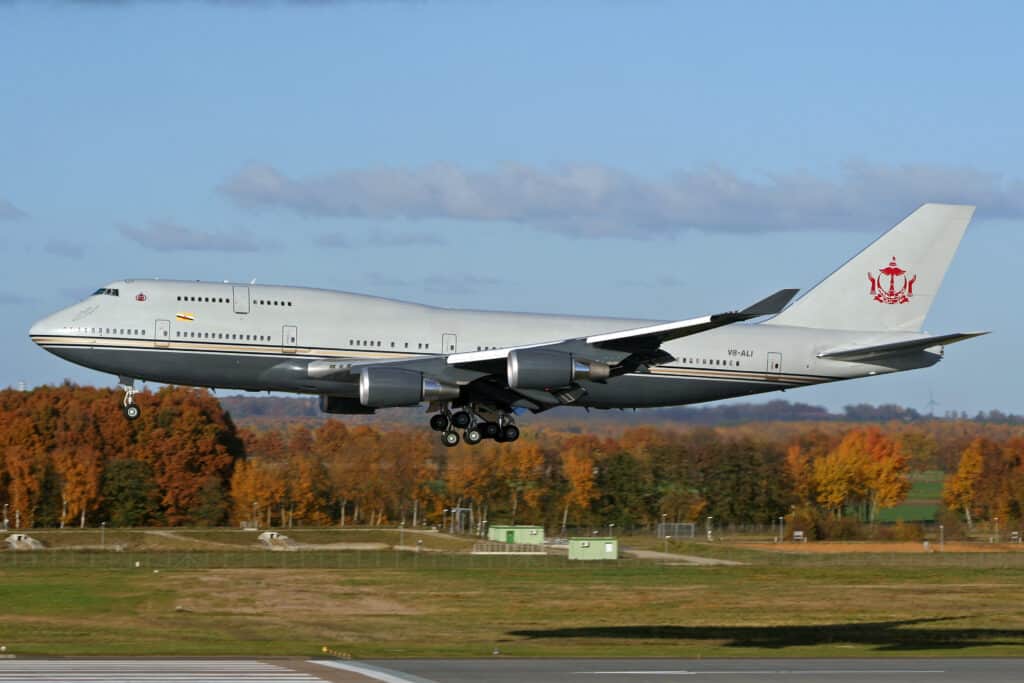 As one of the wealthiest people in the world (at one point he was the wealthiest person ever), the Sultan of Brunei, Hassanal Bolkiah ibni Omar Ali Saifuddien II, has access to the most luxurious items in the world, including one of the most expensive private jets in operation. While the Sultan of Brunei has a whole collection of private planes, the crown jewel of his collection is his custom Boeing 747-430.

Over a decade ago, the Sultan of Brunei purchased the Boeing 747-430 for $100 million and spent another $120 million customize the interior. The custom Boeing 747-430 is decked out with precious metals, gemstones, and valuable wood. The bathroom even has a gold sink.

The Sultan of Brunei’s custom Boeing 747-430 is so luxurious that it has been dubbed “The Flying Palace.” 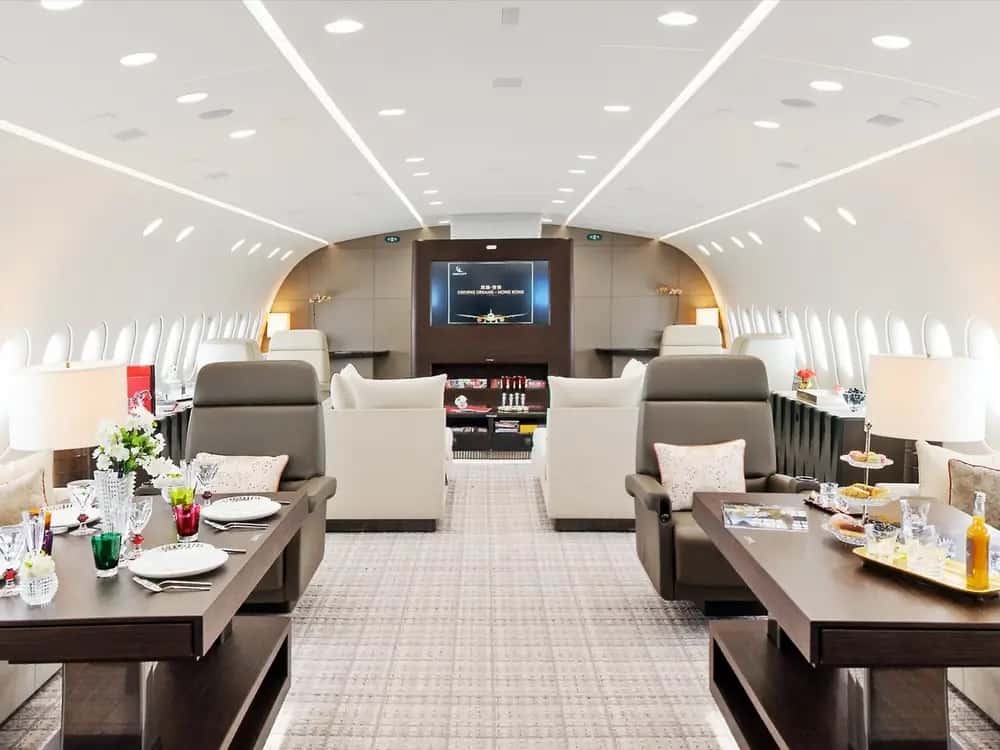 The Boeing 787-8 BBJ is the private jet version of the Boeing 787 Dreamliner. These fully customizable planes have a base price of over $200 million, but a fully decked out interior could cost an additional $100 million.

Among the three Dreamliner variants on offer, the average space available is around 2,500 square feet. This is large enough for a conference room, multiple lounge areas, suites, a dining room, and full bathrooms. Another desirable feature of the Boeing 787-8 is that it has a range of 10,000 nautical miles, which means that nearly any city in the world can be reached in a single flight.

In 2016, the first true Boeing 787-8 private jet was delivered to China’s HNA Group. The plane reportedly cost about $325 million. 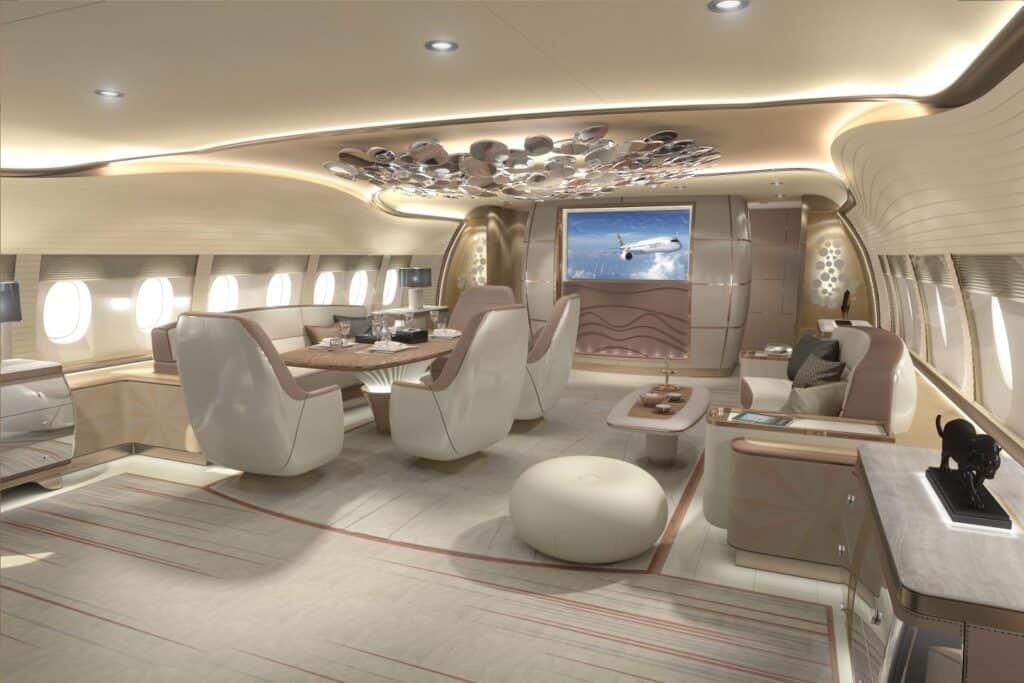 The Airbus ACJ350 is part of Airbus’ corporate/private jet line of aircrafts. The ACJ350 has about 2,900 square feet of living space and is fully customizable. Custom Airbus ACJ350 planes have a starting price of around $366 million.

In 2018, Lufthansa Technik, a global aircraft-services company based in Germany, came up with some designs for a potential custom Airbus ACJ350. The design featured a family room, master bedroom and bathroom, a lounge area, and an office. Lufthansa Technik also envisioned a formal dining area, a full kitchen, and four private guest rooms with two additional bathrooms.

The Airbus ACJ350 uses two Rolls-Royce Trent engines, and can fly up to 12,400 miles—enough to make any flight on Earth a nonstop flight. 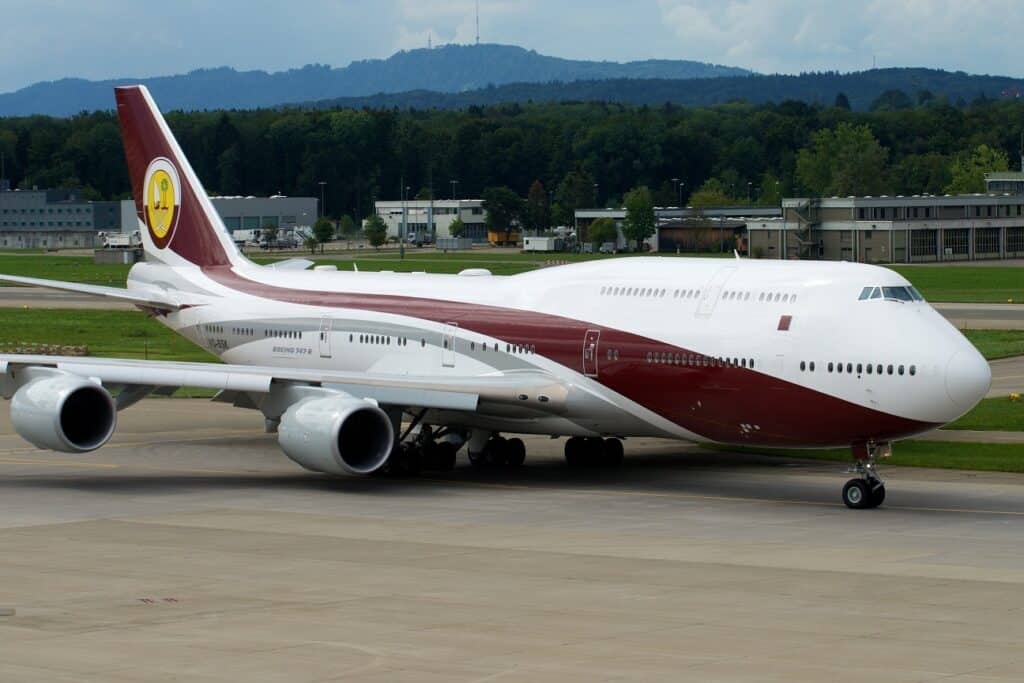 The Boeing 747-8 VIP is the luxury version of Boeing Business Jet airliners. The planes are fully customizable and have a starting price of $367 million. As a large plane the Boeing 747-8 VIP can fit multiple bedrooms, lounges, a conference room, full bathrooms, and a large dining room. There are two levels on a Boeing 747-8 VIP, providing plenty of room to include the best amenities that money can buy. 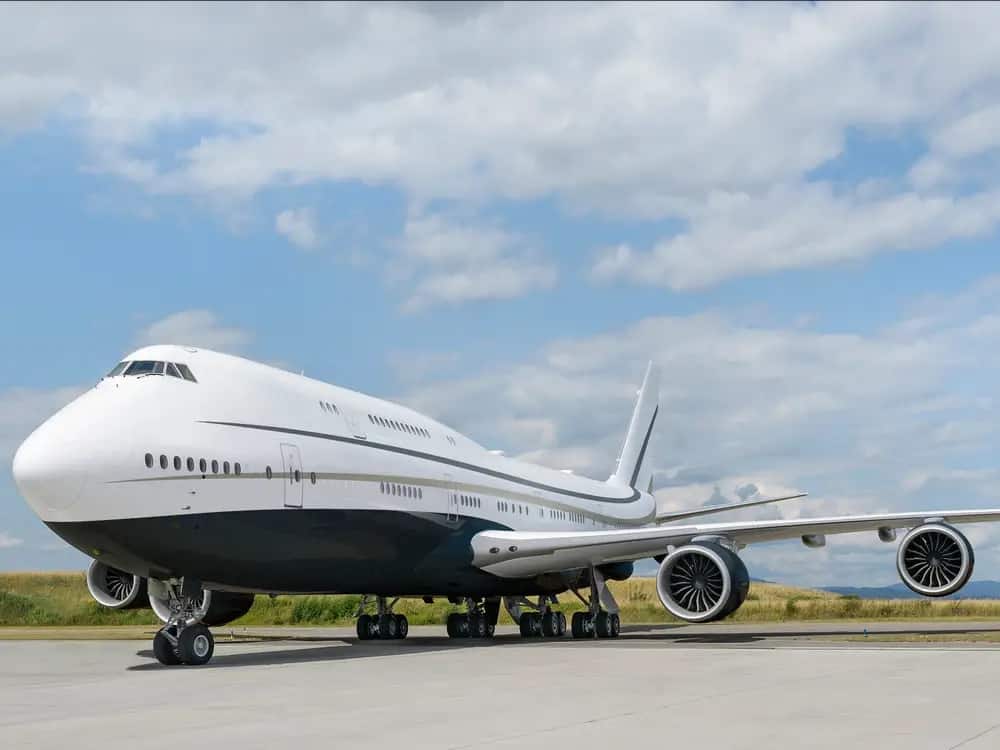 The Boeing 747-8 Intercontinental BBJ is currently the largest private jet in operation. While this plane is typically used by national governments and airlines as cargo carriers, the Boeing 747-8i among the head of states of the Middle East. This particular Boeing 747-8i was customized by French interior design firm Cabinet Alberto Pinto for an unnamed Middle Eastern businessman.

The interior of the custom Boeing 747-8i is divided into ornate suites, staterooms, dining rooms, seating areas, several bathrooms, and lounges. To make the custom private jet feel like a home away from home, it features comfy couches, reading lamps, bedside tables, and walled cupholders. The master bathroom is a full-size bathroom with a walk-in shower and full size sink and mirror.

It took four years to customize the Boeing 747-8 Intercontinental BBJ and reportedly cost around $403 million.

The only Airbus A340-300 private jet belongs to Russian billionaire Alisher Usmanov. The private jet is the largest business jet in the Russian Federation. Usmanov’s plane is bigger and more expensive than the one belonging to Russian President Vladimir Putin.

Not too much is known about Usmanov’s Airbus A340-300, other than it being fitted with luxe interior and all of the best amenities. The plane reportedly has a full-service bar, spacious bedrooms, and luxury leather seats. 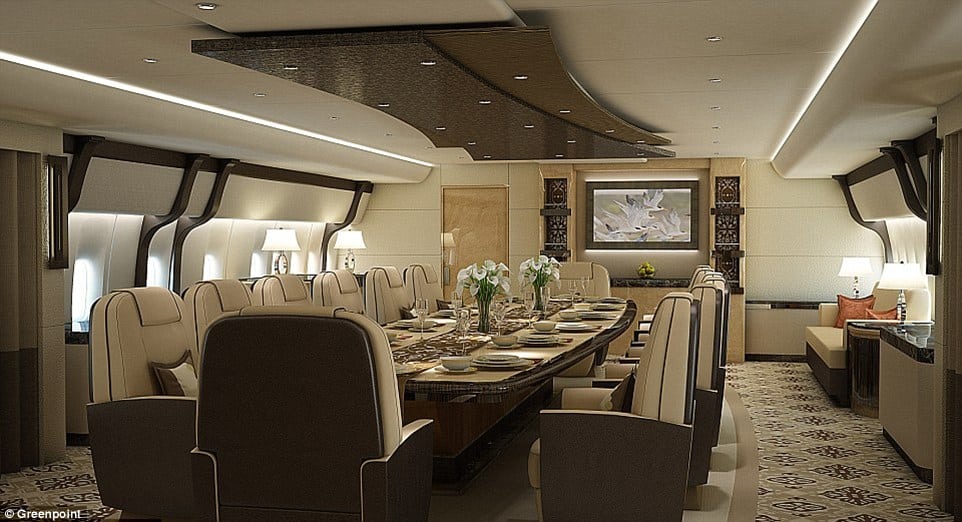 Typically, Boeing 747 planes are known as large commercial aircraft that can fit hundreds of passengers. To those with money, a Boeing 747 has the potential to be another home. A custom refitted Boeing 747, converted into what is essentially a hotel in the sky, costs up to $617 million, making it the most expensive private jet in the world.

In 2015, an anonymous an artists’ impressions of a custom refitted Boeing 747 was revealed. The purposed design featured full luxury bedrooms, lounge areas, a full conference room, and a restaurant-style kitchen with a full dining room.

The custom plane was a Boeing 747-8, which typically holds up to 600 passengers. However, the refit would create space for just about a dozen or so guests.

10 Most Expensive Necklaces Ever Sold

8 of the Most Expensive Hotels in Las Vegas