Bugatti was founded in the early 1900s by Ettore Bugatti, a designer with engineering experience who would become one of the most important automobile producers of all time.

Bugatti’s first cars were significantly influenced by Ettore’s experience with racing. The visionary crafted sleek vehicles that went on to win iconic events like the Grand Prix, but Bugatti cars were also made for standard driving. These vehicles stood out with their high-end designs and steep price tags.

Although the Bugatti brand was going strong during the early 20th century, World War I and II slowed production — at least when it came to cars. During WWI, the company shifted to producing aircraft engines for the American and French militaries. The company struggled in the post-WWII environment, but various acquisitions and new leadership have kept the Bugatti brand running.

Today, Bugatti vehicles are extremely expensive and envied. Prices vary depending on the model, but most sell for at least $1 million — and those prices climb even higher when it comes to limited-edition models.

So just how expensive can these cars get? Find out with this top eight list. 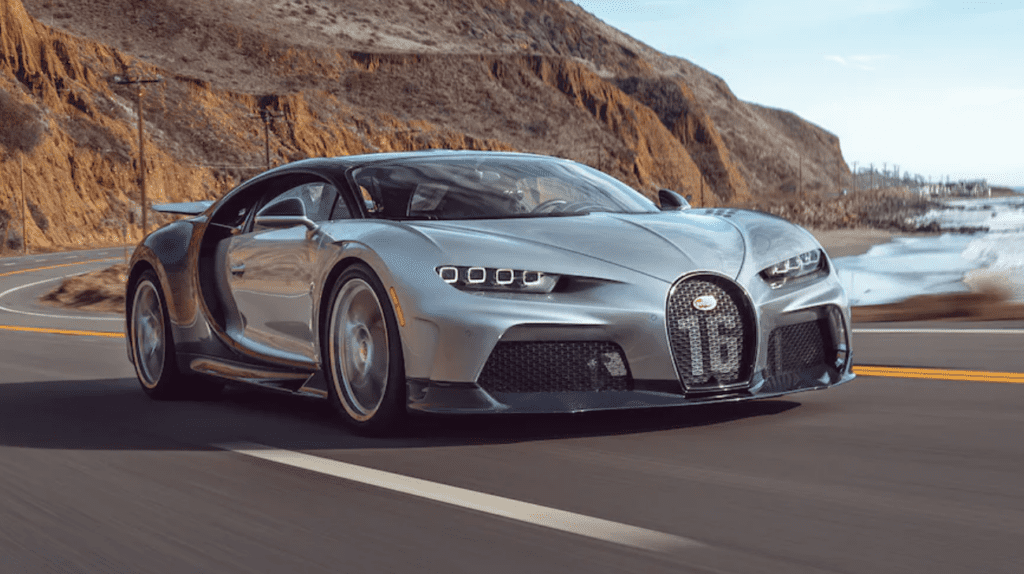 The 2022 Bugatti Chiron Super Sport is powerful. Like, really powerful.

With more than 1,500 horsepower, this car is an insanely fast supercar ready for ultra-quick racing. The vehicle hits speeds just over 273 miles per hour, reaching 60 in less than three seconds.

The lucky few who’ve experienced this car first-hand say the whole thing is the height of luxury and power. Controlling the vehicle at high speeds is surprisingly easy thanks to careful engineering while the interior is perfectly comfortable — but we’re not talking about plush seats and all that. As such a powerful car, Bugatti was more interested in designing a stable ride. Fancy leather and polished aluminum are there, but the real luxury comes in the form of minimal cabin noise and easy control at high speeds.

In the end, Bugatti’s 2022 supercar comes with a jaw-dropping price tag of $3.8 million.

This car hits 150 miles per hour in about 10 seconds — that’s how long it takes most cars to hit freeway speeds! 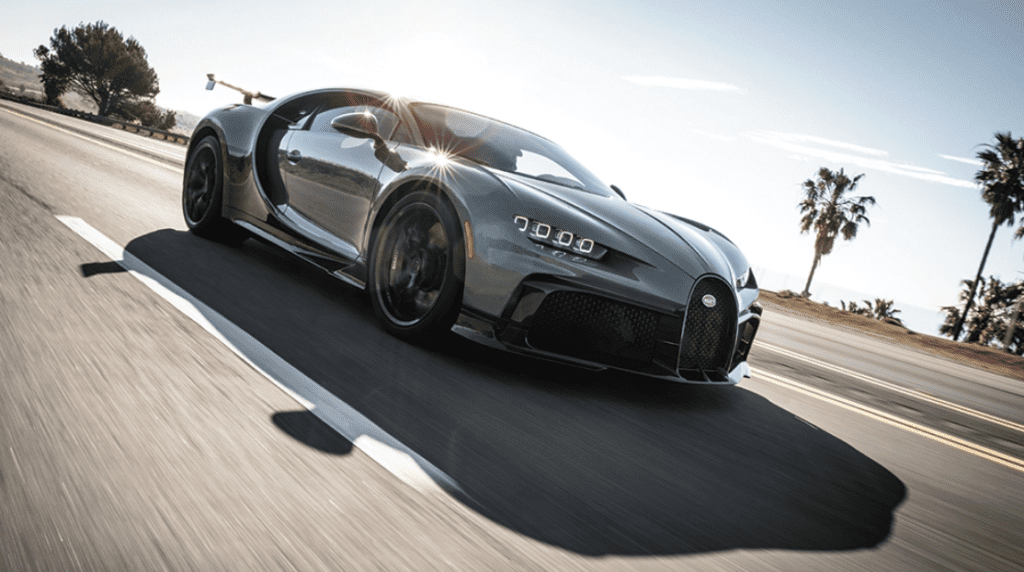 That’s where the Bugatti Chiron Pur Sport comes into play. Bugatti’s 2021 supercar blows the Model T and the Series C out of the water with 1,500 horsepower and max speeds of 217 miles per hour. The crazy-fast vehicle features a quad-turbo 16-cylinder power plant — so there’s plenty of power to go around.

Beyond being crazy-fast, the Pur Sport is crazy-expensive. A big chunk of the nearly $4 million price tag comes from materials and labor. This thing is powerful and carefully designed with pricey components, and the price tag reflects that, but it’s also a rare car. Bugatti only made 60 copies, so wealthy collectors are willing to pay a pretty penny to get their hands on one.

The Chiron original came out in 2016 and amazingly featured enough carbon fiber to reach the moon and back nine times. 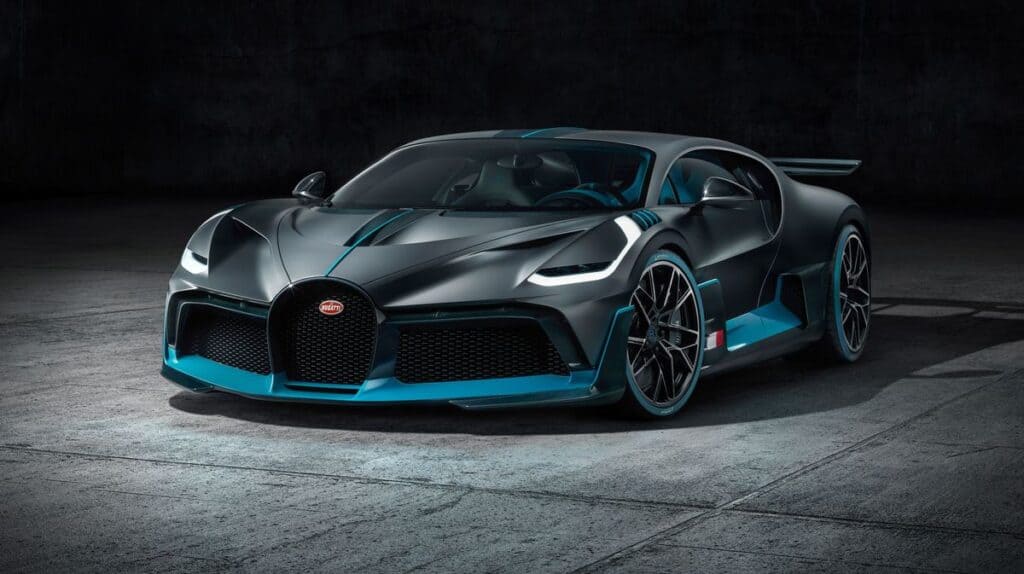 The 2020 Bugatti Divo is titled in honor of a French racecar driver named Albert Divo. Albert was born in 1895 in Paris. In 1922, the driver competed in the International Tourist Trophy race before racing in the 1923 Spanish Grand Prix.

Since it’s named after a racecar driver, you’d expect the Divo to feature a lot of power — and you’d be right. The expensive vehicle offers 1,500 horsepower and reaches 62 miles per hour in only 2.4 seconds. The car is worth an estimated $5.8 million, making it the sixth-most expensive Bugatti in the world. 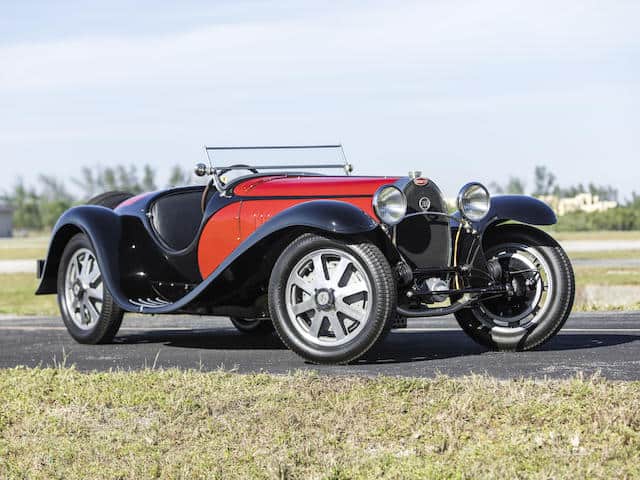 The 1932 Type 55 Super Sport is an extremely rare car. Only a few dozen were ever made, and just 11 still feature original bodywork. As a result, buyers are willing to drop millions on these vehicles. In March 2020, a rare example went up for auction at Bonhams. The final price landed at a steep $7.1 million, making this car the fifth-most expensive Bugatti ever recorded.

When it comes to specs, the real appeal of this car is its historic value — collectors aren’t buying Type 55s to speed around busy streets. Still, the vehicle features an impressive engine, especially for a car from the ‘30s, and highly sought-after coachwork by Jean Bugatti (the son of Ettore Bugatti).

Estimated Value: $9.5 million
Bugatti Year: 1937
Unique Feature: Chassis designed for a racecar competing in the Grand Prix
Interesting Fact: This car was hidden away for 50 years 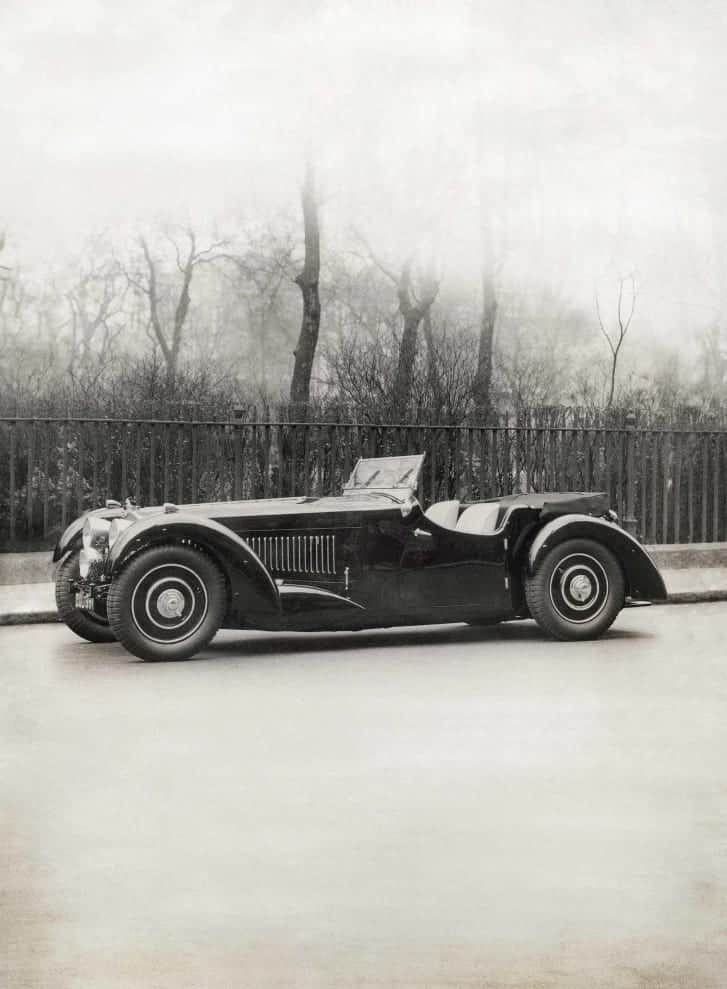 The ultra-rare Bugatti Type 57S is worth nearly $10 million. This particular example was lost for years after a fan purchased the vehicle and started restoring it in 1969. After the owner died in 2020, the Bugatti was rediscovered in his workshop and quickly offered for sale at a Bonhams auction.

Interestingly, the rare 57S features chassis originally designed for a Bugatti model made for racing in the Grand Prix. Only three of these original cars were ever made, but the chassis went on to be included in the rare 57S.

According to experts, the 57S has always been a sign of wealth. “When they came out they were effectively the fastest and most exclusive car you could buy,” said Sholto Gilbertson, the director of Bonhams’ Motoring Department, “most of them [now] are in major collections or museums globally.”

This car has been called the “ultimate model” of its era. 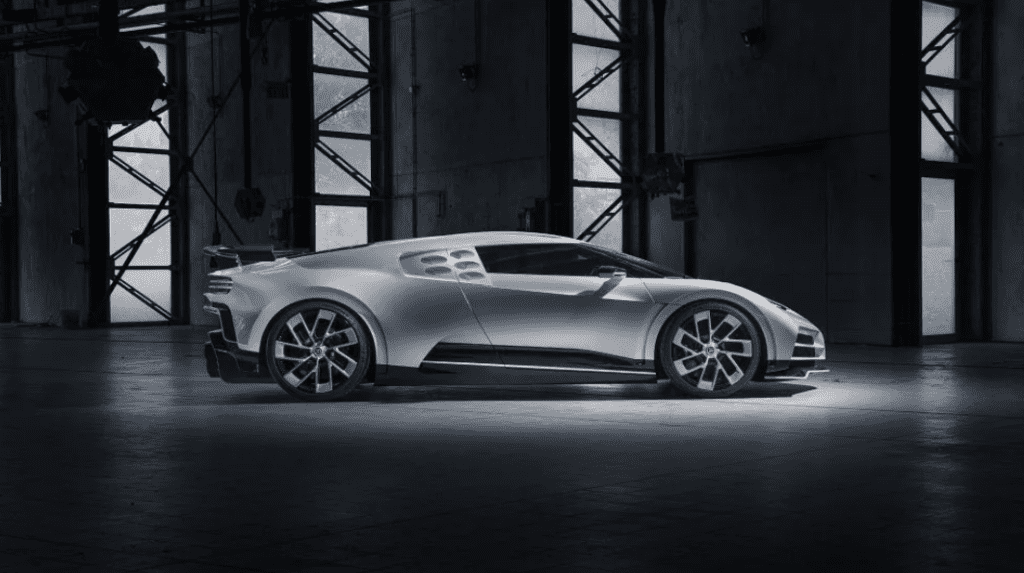 With just 10 units set for production, the Bugatti Centodieci is one of the rarest models out there. The hyper-expensive car comes with a standard price tag of about $9 million, but dealerships price it at about $14 million. That’s a $5 million markup!

The car itself offers 1,600 horsepower, so there’s plenty of speed for anyone lucky enough and rich enough to purchase a unit.

Unsurprisingly, these cars sold out quickly. With only 10 examples available, some dealers started posting their resale prices before the Centodieci even started production.

This car is inspired by the EB110. 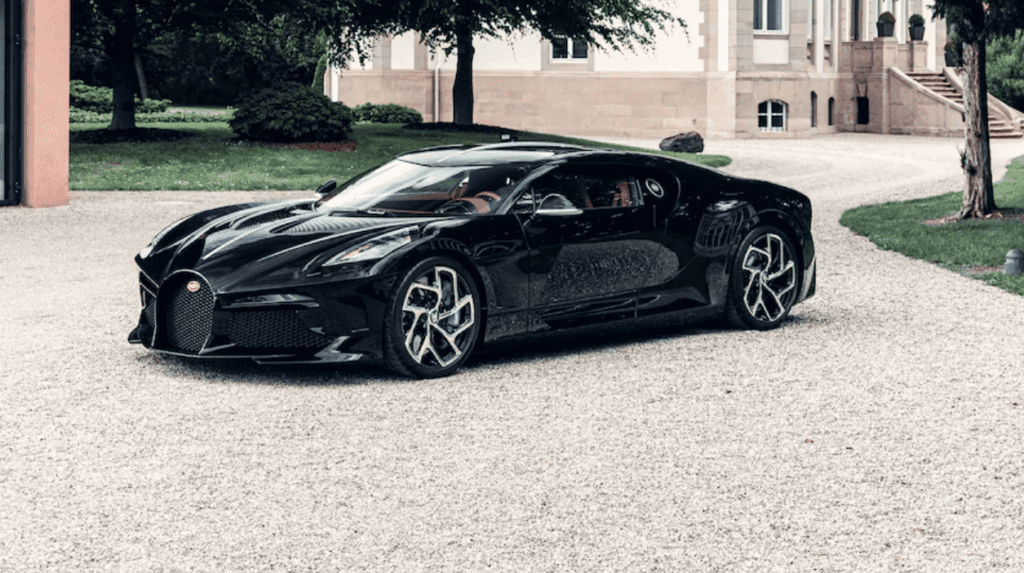 Coming in at number two is the impressive Bugatti La Voiture Noire. With a jaw-dropping price tag of $18.9 million, this car is among the most expensive vehicles on the planet — Bugatti or otherwise.

Like other pricey cars, this vehicle offers astonishing power and speed. The car sports 1,600 horsepower, four turbochargers, and 1,180 lb-ft of torque. Yeah, it’s a lot.

Bugatti unveiled this one-of-a-kind car to celebrate its 110th anniversary. The wildly expensive creation was purchased by an anonymous Buggati fan.

The name of this 16-cylinder car fittingly translates to “the black car.” 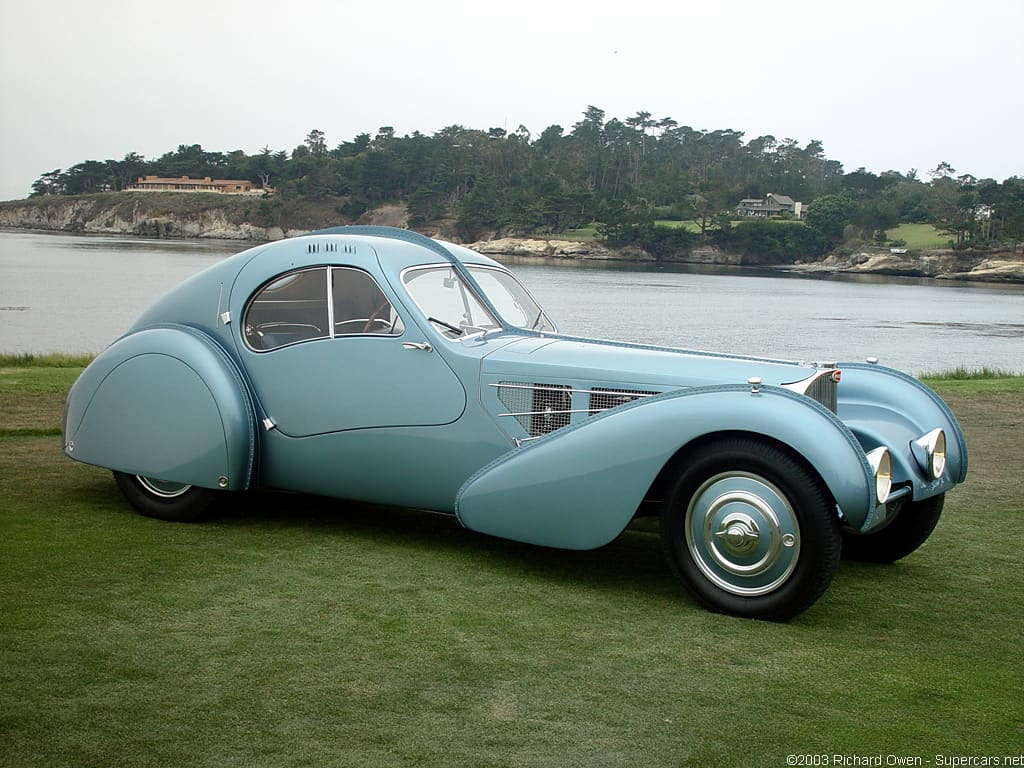 The Bugatti Type 57SC Atlantic is the most expensive Bugatti in the world.

At $40 million, the rare 57SC Atlantic is easily the most expensive Bugatti on the planet. The incredibly rare vehicle was only produced three times — one hand-crafted car for three wealthy customers. This particular example was sold to Victor Rothschild, an extremely wealthy banker.

Currently, fashion mogul Ralph Lauren is the owner of the third and final 57SC Atlantic ever produced. Jean Bugatti also owned one of these rare cars.

Jean’s 57SC Atlantic has been missing since 1938, but experts say it could sell for more than $100 million if it’s ever discovered.