Modern tennis started getting really popular in the 1960s, but the game has roots dating back to the 12th century in France. The tennis ancestor was called jeu de paume, roughly translating to “game of the palm.” This sport (sometimes called “real tennis,”) has become relatively obscure today, but some athletes still play the game.

The transition from “real tennis” to modern tennis is debated among historians, but many point to the 1870s as a turning point when a Welsh inventor named Major Walter Clopton Wingfield patented his game called “lawn tennis.” This sport is a little different from the tennis we know today, especially among American athletes, but it’s very similar to standard tennis matches played by millions in the modern era.

Tennis is a really popular sport today and it’s usually not too pricey to start playing. However, some tennis equipment can be very expensive. A lot of high-end rackets go for more than $1,000, but the most expensive rackets hold historical significance.

Learn more about the world’s most expensive tennis rackets with this list. 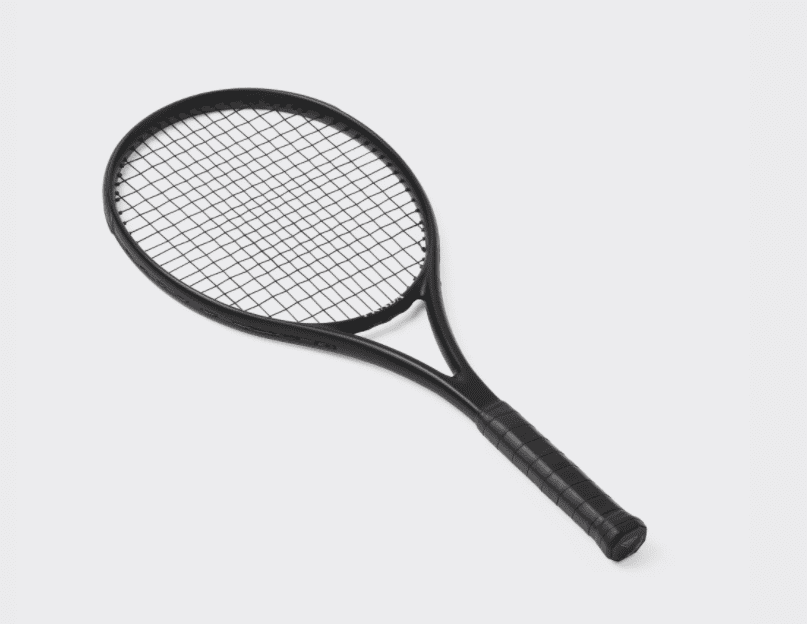 Prada is known for its pricey clothing (like this $2,300 jacket), but did you know the brand also makes sports equipment? That’s right, the luxury clothes-maker is behind several pricey athletic products like this basketball going for more than $700. Looking for an indoor sport? Prada has you covered with ping-pong paddles priced at over $2,000.

So what about tennis? Yeah, Prada has that too. The high-end brand offers a tennis racket coming in at a cool $1,990. The simple design features a minimal body available in red or black. Buyers also get a carrying case complete with the Prada logo and an adjustable strap. For environmentally conscious buyers, that nylon case is made from plastics collected from the ocean.

Everyone knows you should stay hydrated while playing sports. Prada has you covered during intense tennis matches with this metal water bottle priced at $85. Why’s it so expensive? The bottle is made from stainless steel, but most of the price really comes down to the allure of the Prada brand. 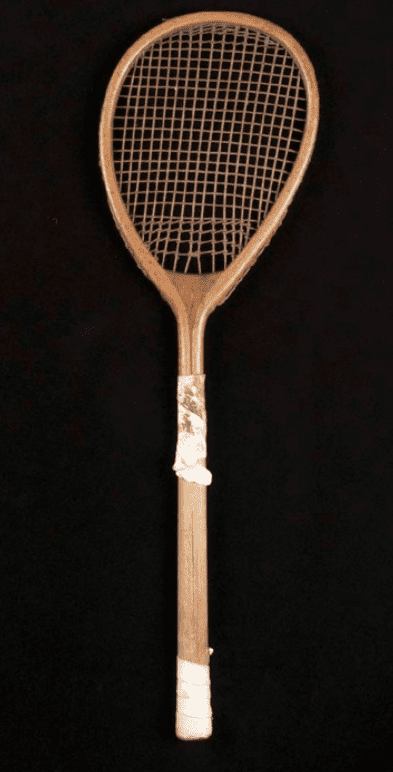 Tennis memorabilia is typically expensive — especially when it’s antique. There have been a few examples of old tennis equipment fetching a nice chunk of change over the years. This antique tennis ball cleaner from the 1920s, for example, went for GBP 60 (about $80) several years ago. Not bad, but how high can prices go?

Well, it turns out they can go way higher.

In 2002, a rare tennis racket caught the attention of wealthy sports fans. The unique example of a racket from the 1800s features a sheepskin grip (which isn’t common anymore), walnut and ash materials, and a stamp indicating Henry Malings of Woolwich was the maker. The unique find went for way more than 80 bucks — the final bid came in at over $2,000!

After that crazy expensive racket sold, the same auction house offered two tennis balls signed by none other than Roger Federer for a whopping GBP 1,625 (or about $2,100).

This rare tennis racket features original stringing. The historical equipment was expected to go for between GBP 1,500 and 2,000. 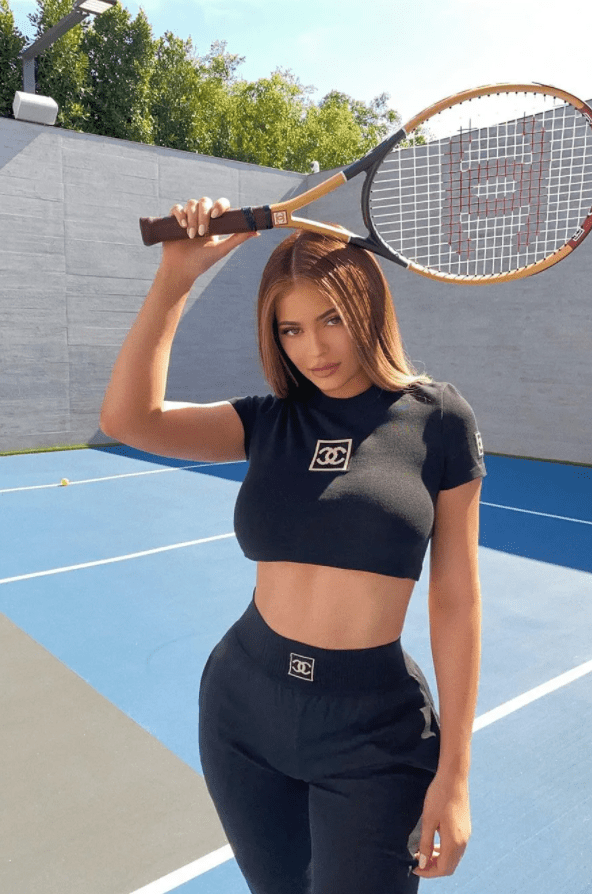 Maybe you don’t think of athletics when you think about Kylie Jenner, but the star says she was actually pretty into sports for a while. “I think that people don’t know that I’m really good at sports,” she said during a question and answer session, “I was on the boys’ football team.”

Although Kylie’s known more for her wealthy lifestyle and modeling today, she’s still shown some interest in athletics… sort of. In 2020, the non-billionaire posed with a Chanel tennis racket while wearing a Chanel crop top and Chanel sweats. That’s a lot of Chanel!

The racket is technically called the Chanel Oak Tennis Racquet (the brand uses the British spelling of the word) — and it goes for an eye-popping $2,499.

Chanel isn’t super involved with the sports industry, but the company does offer a selection of sporty-fresh fragrances under its ALLURE HOMME SPORT collection. A small bottle of the scent goes for about $90 — but that’s just for the cologne. Add the deodorant and that’ll cost you $40 more.

Kylie Jenner is no stranger to ultra-expensive purchases. In 2020, reports emerged that the reality TV star bought a California home for over $36 million! 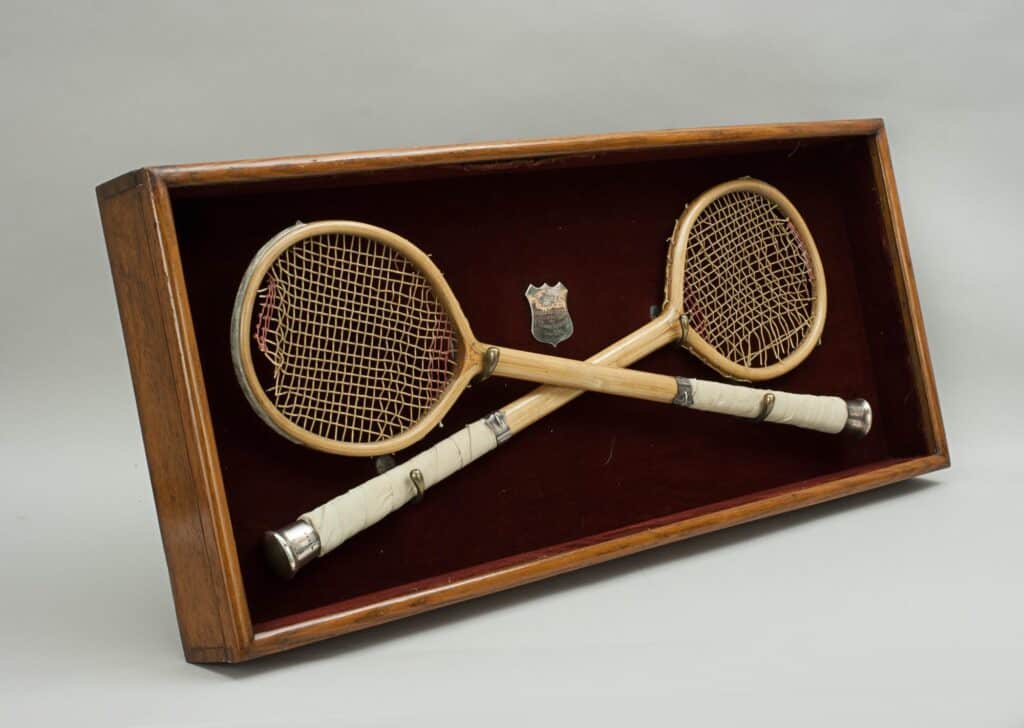 Tennis has a long history in the United Kingdom. A notable modern version of the sport was created by a Welsh Renaissance man, and Oxford has been home to a tennis court since the 1500s.

It’s no surprise then that the U.K. has plenty of unique and antique tennis memorabilia — including this rare set of Eton rackets from the year 1890. The historic find has a price tag of about $5,600!

The auction house behind these pricey rackets says they’re sold inside their original presentation case with markings indicating their age and origin. Interestingly, both rackets feature real silver at the base of their grips — probably because they were a decorative award given to a British tennis player.

The set is in “very good” condition, but both rackets have damaged strings.

These tennis rackets were awarded to an athlete named Walter S. M. Burns. Walter played tennis at Cambridge. One report described Walter as “a keen shot” and described the tennis player’s travels across Europe, America, and England. 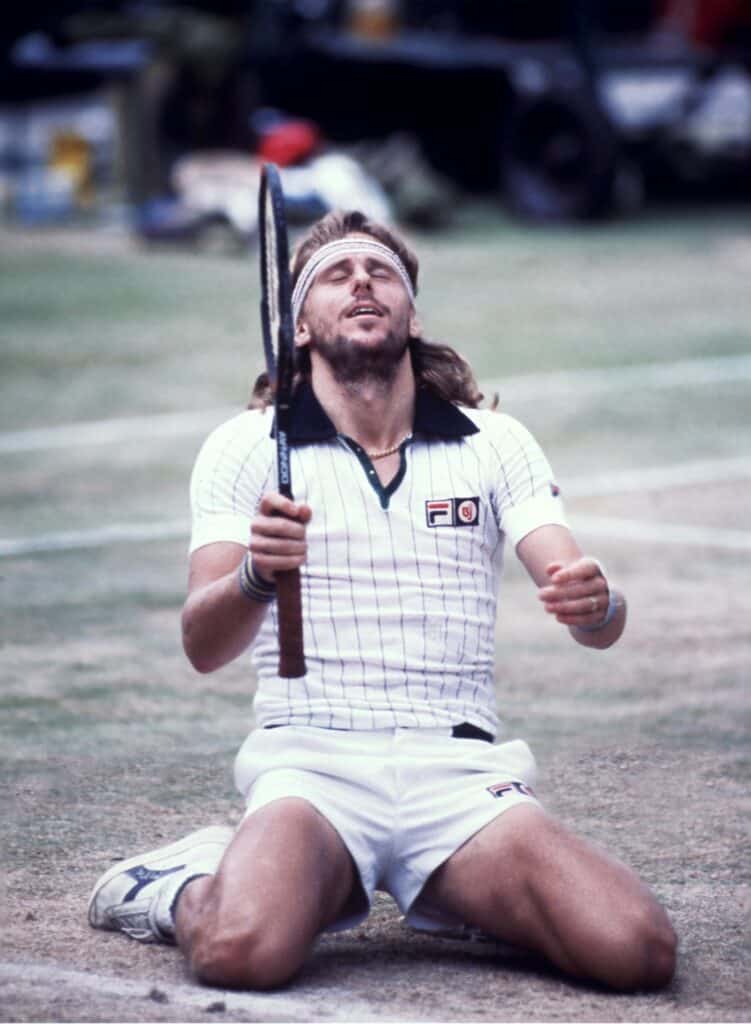 As such a famous player, anything owned or used by Borg is sure to sell for thousands — and that’s exactly what happened with his set of Donnay Pro rackets. The couple was gifted to a member of Borg’s management after either the 1980 or ‘81 Wimbledon final. The set remained in the possession of that management team member until 2006 when it sold for more than $8,000 at a Bonhams auction.

Donnay was the world’s leading tennis racket maker in the 1970s. 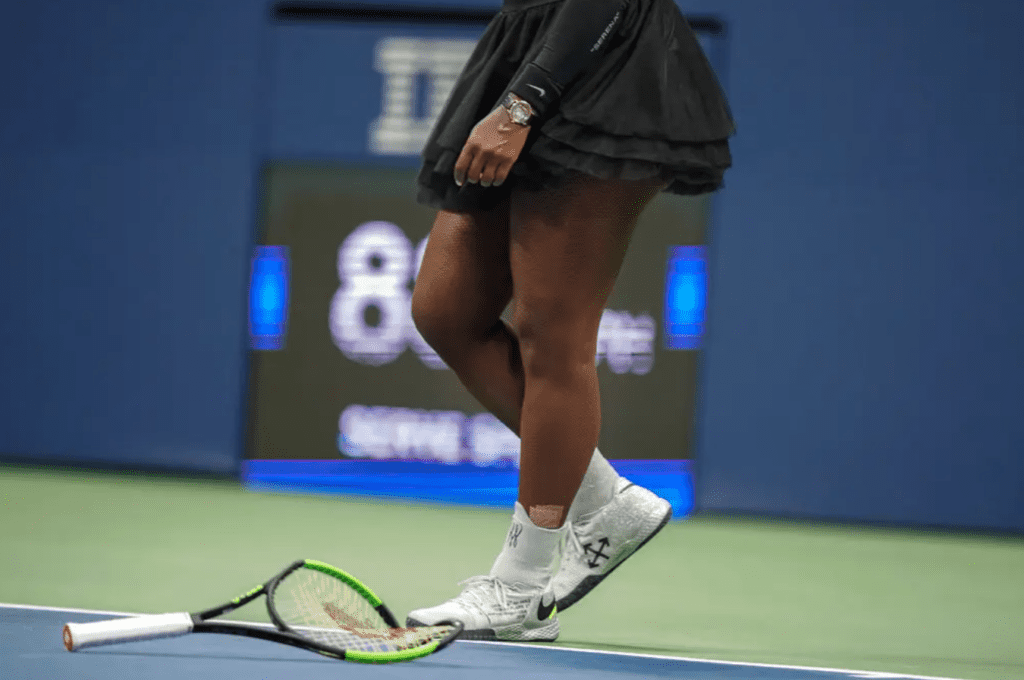 Serena Williams is inarguably one of the best tennis players of all time, but that doesn’t mean she always wins. In 2018, the athlete lost the United States Open final against Naomi Osaka — then smashed her racket in anger. The moment stirred up a lot of controversy, so it may not be surprising that the ill-fated racket became an iconic piece of tennis memorabilia. Reports say the racket sold for more than $20,000, making it the third-most expensive tennis racket on the planet. 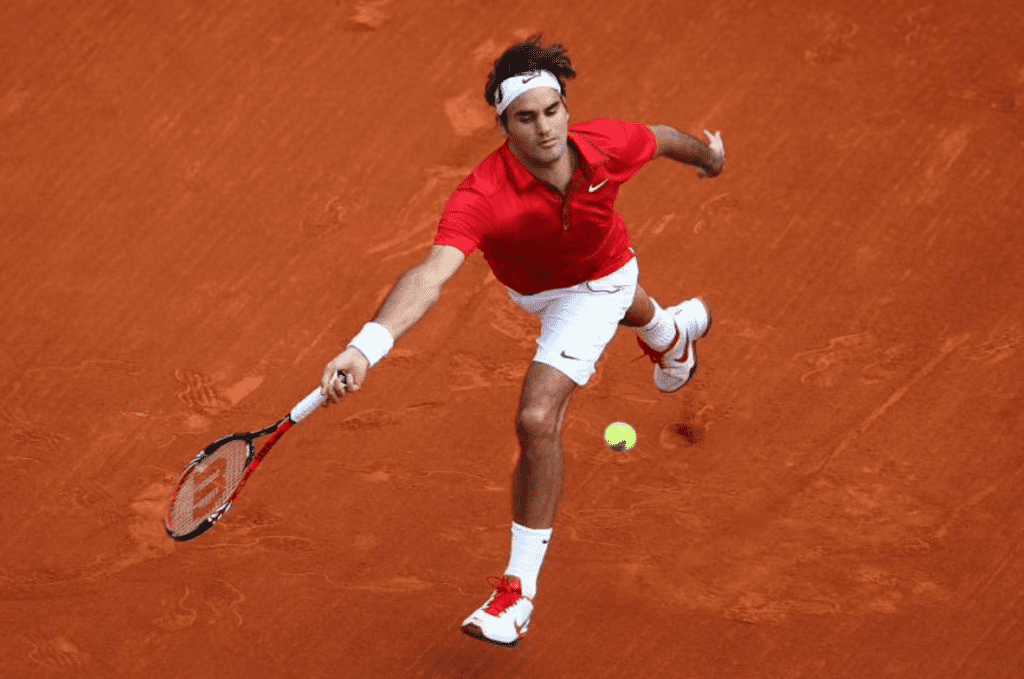 Roger Federer was born in 1981 in Switzerland and started playing tennis at the age of eight. The athlete quickly rose to fame as one of the best players of all time, winning a record-breaking eight Wimbledon titles. Federer also made history by becoming the first player to win 20 Grand Slam men’s singles.

In 2020, Federer’s racket from the 2011 French Open sold for a jaw-dropping $55,000. The historic racket was signed by the player in black Sharpie and stands as the second-most expensive tennis racket of all time. 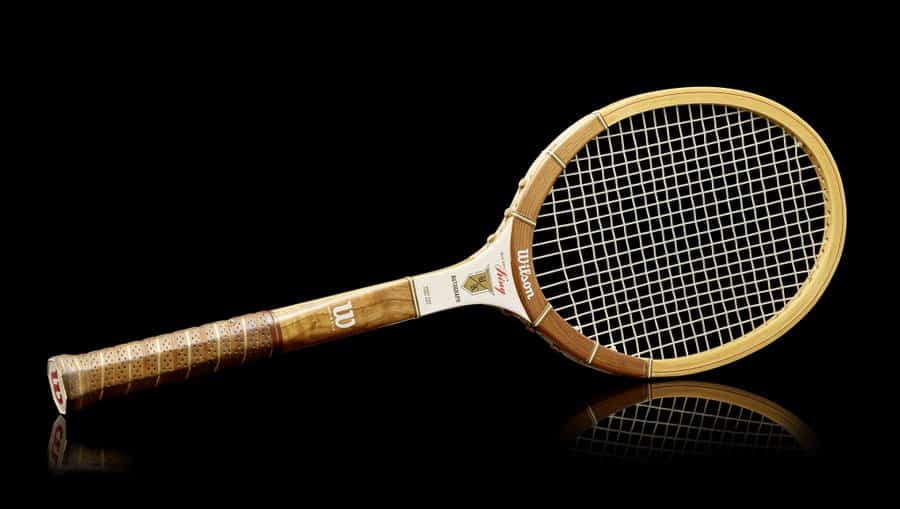 Billie Jean King’s racket is the most expensive tennis racket of all time.

Years later, in 2017, the racket King used to defeat Bobby Riggs sold at auction for $125,000, making it the most expensive tennis racket of all time.

10% of the money earned during this racket’s auction was donated to the Women’s Sports Foundation.

8 Most Expensive Acoustic Guitars Ever Sold