Japan invented the modern airsoft gun in the 1970s to give people a way to own the appearance of a firearm in a country where it was illegal. Today, airsoft is a sport in its own right, covering the world with these cap-type guns, particularly rising to global stardom in the mid-1990s in the U.S. and Europe, where airsoft remains most popular.

Today, with a ton of different models to choose from, you may be interested in the 8 most expensive airsoft guns you can buy. 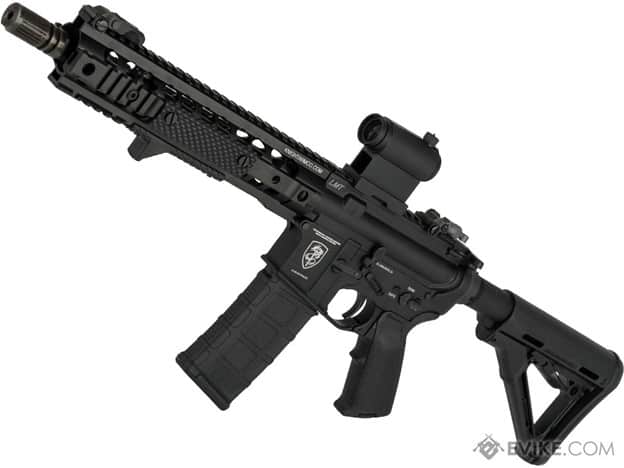 This gun is considered a professional training weapon or PTW because of its devotion to power and realism. Its receiver was milled from a real AR receiver. Its upper receiver was from a real LMT too. Owning this authentic airsoft beauty by ZShot will set you back almost $2,800.

Professional Training Weapons from Systema have such precise trigger control that they feel like real guns. They have interchangeable power cylinders and real steel dimensions, making them ideal for real combat practice, complete with as many accessories as you want to add. 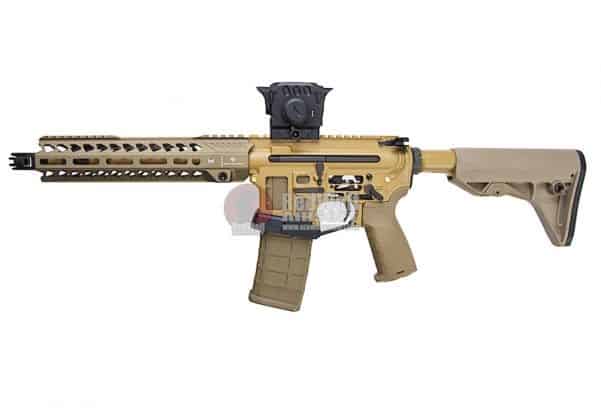 The Airsoft Surgeon Strike AR Version II is a hefty airsoft rifle, powered by 380 FPS. The color from the cerakote is uniquely suited to replicating the look of a real firearm. This AR/M4 blowback rifle is a finely tuned replica, equipped with a light strike rail and M-LOK accessory slots.

It even comes with a red optic sight for maximum accuracy. Owning this gun will cost $2,885.

Cerakote is a ceramic coating used on metal, wood, plastics, and polymers that gives real firearms their signature glossy look. Since 1974, the company has been a renowned source of metal finishes and hi-temp coatings. 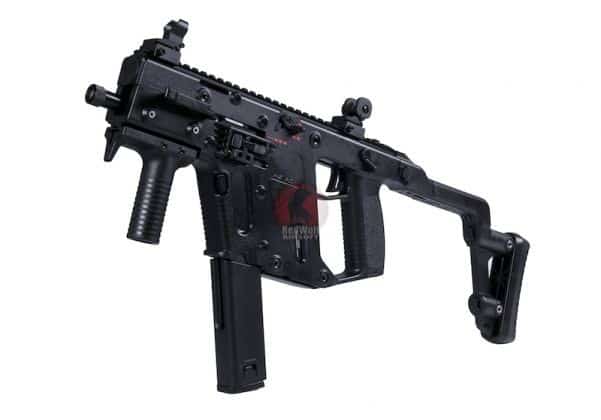 The KWA KRISS VECTOR GBB airsoft gun was discontinued shortly after release due to a dispute with KRISS. It featured a removable gas magazine and recoil impulse, designed to imitate the functionality of the real gun. It had an adjustable hop-up, a 49-round capacity, and a comfortable 2.69-pound carrying weight.

The gun was able to fire in full auto, semi-auto, and burst modes. Owning it used to cost $3,299, though buying this airsoft gun now is even more of an investment since the gun was pulled from the market.

The outside of the gun is made from high-quality polymer, even the folding stock, with metal sights on the front and back. The inside is metal too. Under the flash hider, there’s a 14mm CCW thread if you have a suppressor you want to attach. 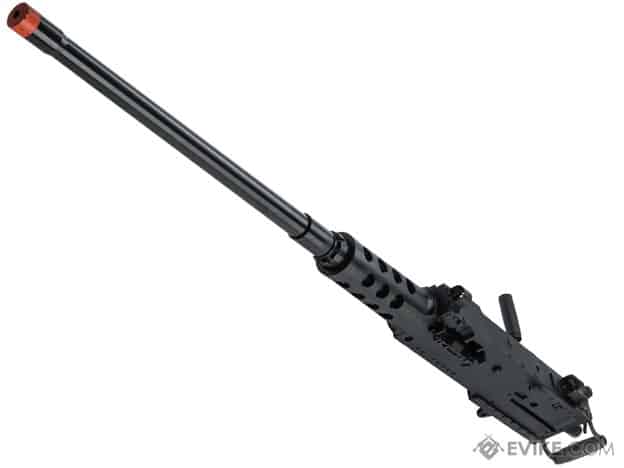 This is the steel and aluminum AEG variant of the 3D MMP Browning M2 .50 Cal Heavy Machine Gun. It’s the heaviest gun on this list, coming in at a stout 61.72 pounds. It’s based on the M2 HMG from the 1930s, the kind usually seen on the tops of military Jeeps and Sherman tanks.

This 1:1 airsoft replica packs some serious firepower at 20 rounds per second. Owning this gun costs $3,300.

This M2 replica gun is made from steel and aluminum to give it the same feel as the real thing. It fires around 400 FPS, full auto, and was made by the folks at 3D MMP.

The RWC VLTOR M4 (Systema PTW Version) Limited Edition airsoft gun is an electric-powered powerhouse. It goes up to 460 FPS with a magazine capacity of 120. The A4/M4 series is already a venerated part of airsoft history. This particular gun has heat-treated steel gears and a high-torque motor to handle both the M90 and M150 cylinders by Systema.

This gun runs on a 12V battery, which is huge (you could run a motorcycle on it). The gun is most coveted for its VLTOR-style receiver and floating custom aluminum handguard. Owning the RWC VLTOR M4 Limited Edition rifle will cost $4,288.

This gun’s receiver is CNC-machined into a custom ergonomic and adjustable model that puts the old LE stocks to shame. It also has a custom Magpul MIAD grip with a ton of grip panel options. CNC stands for Computer Numerical Control and refers to a modern machining process that involves computer-controlled grinders that create crazy accurate parts for complex machines like this gun. 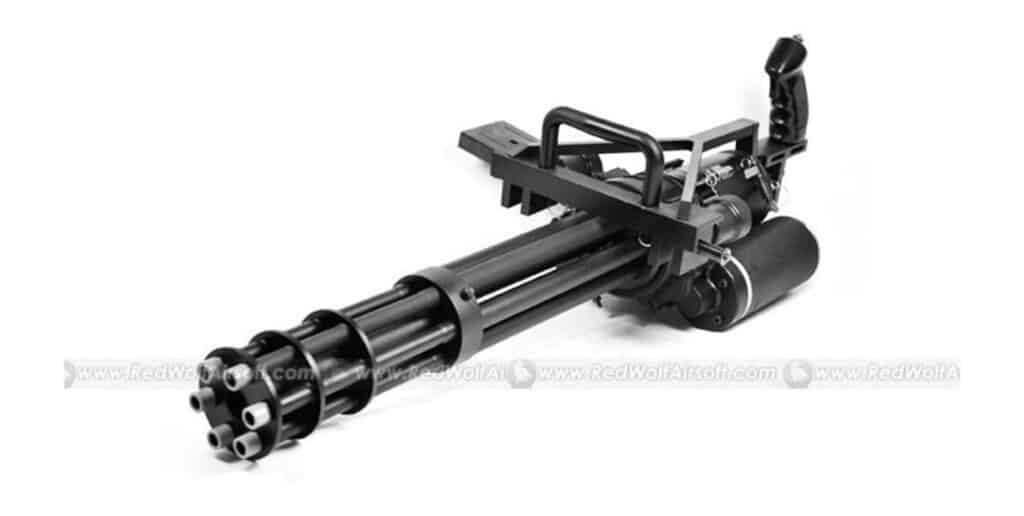 This isn’t an ordinary airsoft gun – it’s a full-blown airsoft minigun called the ECHO1 (CAW) M134 Minigun (Long Version). Anyone who knows about these giant airsoft armaments knows about the M134 series, but this is the biggest one yet. It has a huge capacity (1,700) and FPS (400+), able to fire 6,000 rounds per second, according to CAW. CAW out of Japan built this huge gun to be powerful. They ended up creating just about the heaviest airsoft gun around, weighing in at a chunky 37 pounds.

The gun is powered by a 12V battery, the kind that you normally see in the engines of motorcycles. An adjustable hop-up makes this gun even more versatile than similar ones, such as the M134 Creation. As it spins at 3,000 RPM, you can be sure that you can level any playing field (literally) with the ECHO1, which is good, since the gun costs $4,550.

CAW stands for Craft Apple Works, a model gun manufacturer that makes expensive airsoft products out of Sahara in the Chiba prefecture in Japan. Yoshihisa Hongo started the brand in 1990 and has since risen to become one of the leading names in cutting-edge airsoft manufacturing. 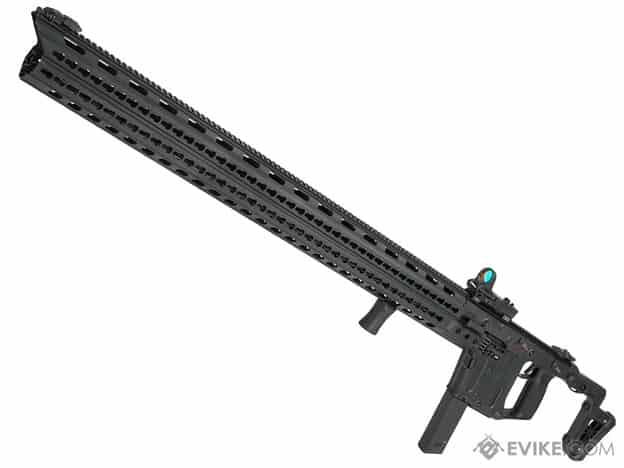 The Evike Custom “Anti-SBR” Krytac Kriss Vector Airsoft AEG SMG Rifle is a CQB-legal rifle with an FPS range of 330-340. Its rail is 59 inches long, with a 33” outer aluminum barrel. The accuracy of this airsoft rifle is insane, with an inner barrel (590mm, 6.03mm tightbore) that makes it more than formidable in any match.

The rifle has burst fire, flip-up sights (front and back), and ambidextrous controls so left- and right-handed users can get an equal piece of the action. It has a folding stock to make it easier to store, but let’s face it – this is a big gun, and storage is going to be tough no matter how you fold it. Owning this monster rifle will cost you $5,000.

This minimalistic vector rifle is designed to keep a low profile despite its size, even fitting under a jacket. Krytac and Laylax worked together on this one to create a finely tuned rifle with as much rail space as possible. The gun has a ton of KeyMod mounting surface too, perfect for as many optics as you can squeeze in. 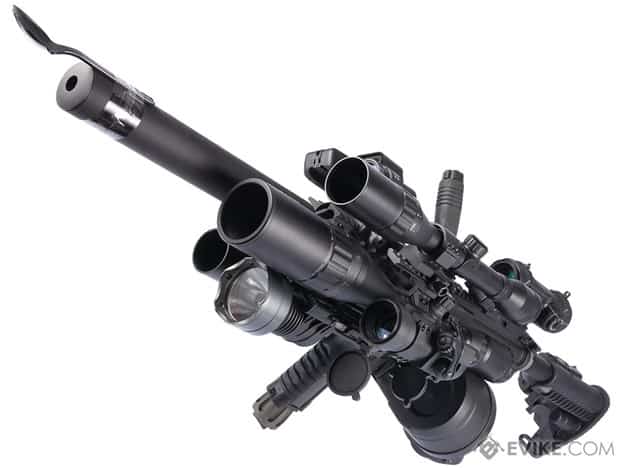 The most expensive airsoft gun is the Evike Custom “Optic Thunder” M4 Airsoft AEG Rifle. This incredible gun has a total of seven scopes, as well as multiple scope mounts and a full metal receiver. It has a tactical flashlight, a grenade launcher built into the frame, and an inverted vertical grip.

This custom gun is fitted at the front with a spork, for some reason (possibly to simulate a bayonet) at the end of its long mock silencer. Reviewers praise the Optic Thunder rifle’s sniper pistol grip, which is ergonomic, top-of-the-line design. This airsoft rifle costs $10,000 when you can find a retailer that still sells it.

Evike’s tactical spork is an interesting piece of sarcastic design. It’s a stainless-steel comedy bayonet with the Evike logo etched and polished in. It can literally be used as a spork but can also double as a shiny mirror and emergency signal in a pinch. The back of the spork is a metal can opener, making it an all-in-one snack retrieval device.

Airsoft guns are often near-exact replicas of real firearms, save for the ammunition. The ones that can fetch thousands of dollars are supreme examples of craftsmanship that have taken the airsoft industry away from its reputation as a toy market towards genuine, professional-grade training weapons.

Who Owns the Most Expensive Cars in the World?