If you’ve ever been to a fancy restaurant, there’s a good chance you saw something on the menu mentioning truffles. And if you happened to order that truffle dish, you know just how expensive these little fungi can be.

That’s right — truffles are a type of fungus, like mushrooms.

The unique ingredient has been a staple in high-end restaurants for years, and only the richest foodies can afford them.

But what’s the deal with truffles? Why are they so pricey? It really comes down to rarity. The fungus occurs naturally, but only in very specific conditions. Too hot and they’ll die, too cold and they won’t grow. They’re temperamental, so they’re super hard to find even in truffle-rich environments.

As such delicate organisms, truffles are equally hard to farm. Cultivating them is pretty much impossible for most people, so suppliers rely on truffle hunters to track down the rare ingredient. These hunters often use the sniffing power of dogs to locate truffles underground, but pigs are also common truffle-hunting companions. Known as truffle hogs, these piggies sniff around like dogs and lead their owners to the expensive prize.

So just how pricey is this fungus? Find out with this list. 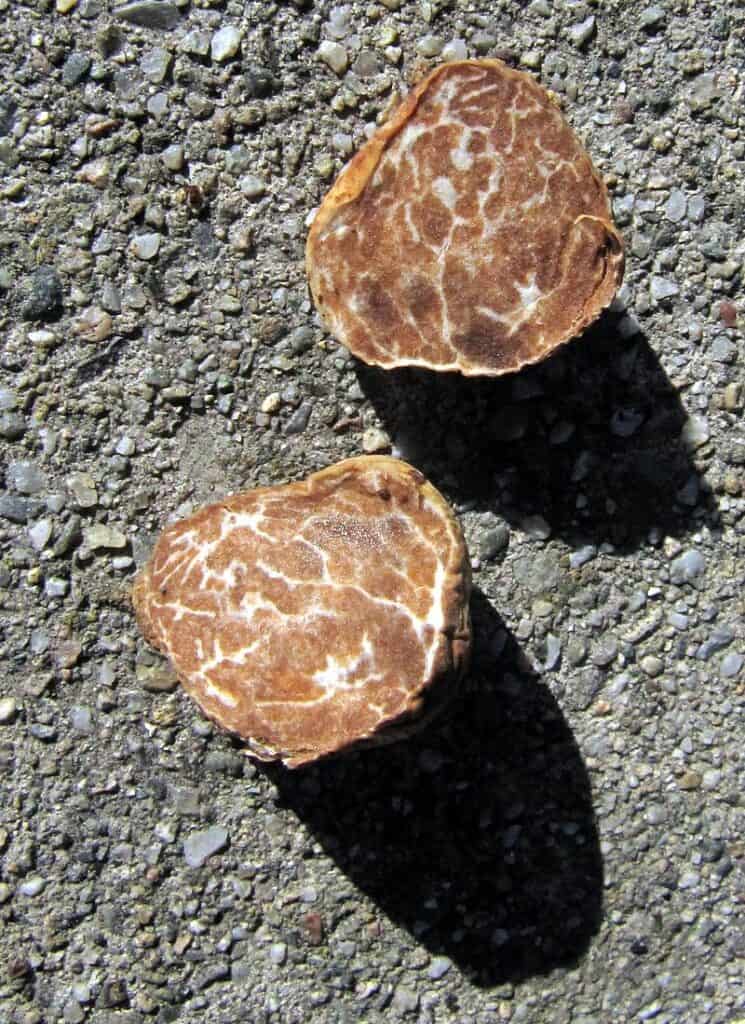 Most truffles come from Europe, but these truffles are found in the state of Oregon. The expensive fungus goes for about $45 per ounce, making it the eighth-most expensive truffle in the world. That price tag is a result of how rare these truffles are, but high demand doesn’t help lower costs.

Like other truffles, Oregon truffles are often served over pasta dishes. Many recipes suggest thinly slicing or shaving the fungus directly over a piping hot dish to get the most flavor from your pricy topping.

These truffles are a relatively recent discovery. One report says the fungus was “Described as new to science in 2010.” 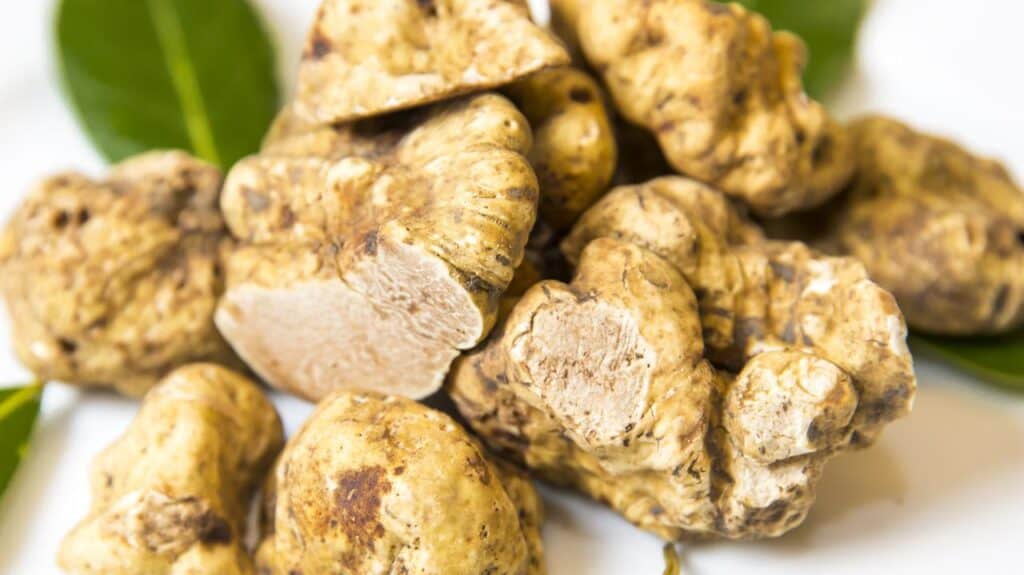 Auctions are pretty common in the world of truffles. The little underground mushrooms are so expensive and rare that sellers can’t really maintain a constant supply, at least when it comes to the rarest varieties. That’s why selling at auction makes more sense — if you don’t have truffles for sale year-round, you can still earn enough money to run your business by making a big splash at a few auctions.

That’s exactly what happened with this record-breaking small white truffle. The little fungus went up for auction in Italy, and people instantly took notice. The truffle was small, so it didn’t stand out as much as other varieties, but its price tag was eye-catching: 140 euros. That may not sound like much, but remember just how tiny this truffle was. Reports say the mushroom weighed just 0.07 grams. Do the math and you’ll find that the little guy was going for 2 million euros per kilogram (or about $2.1 million USD per pound). Yeah, this truffle was small but mighty — making it the seventh-most expensive truffle on the planet. 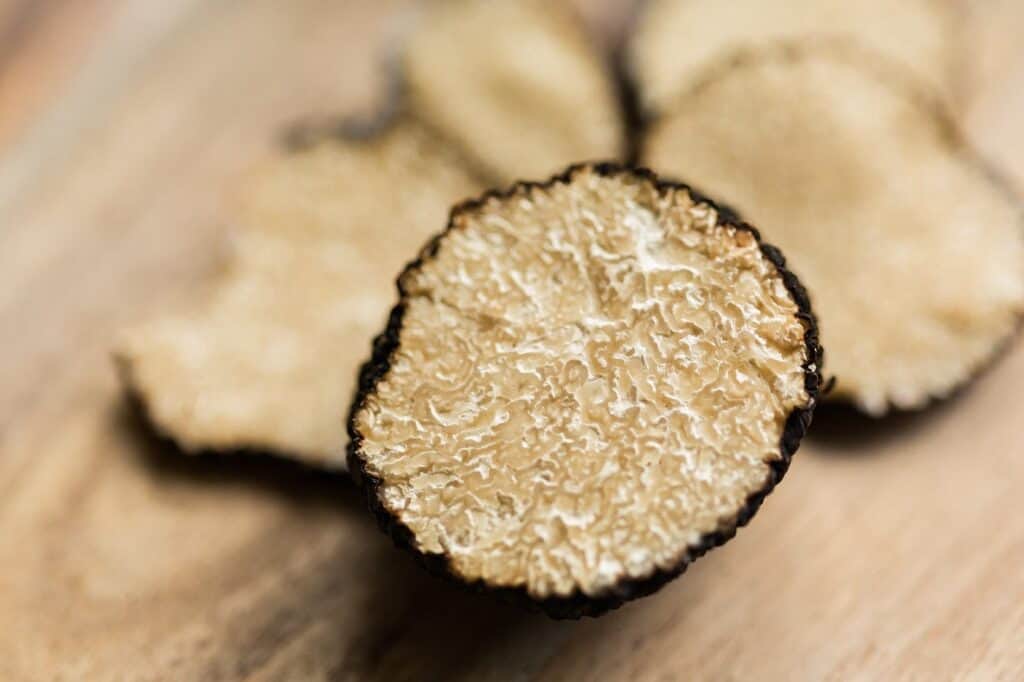 Black truffles actually have three varieties: summer, winter, and autumn. You guessed it, each is found in a separate season — and the weather has a pretty interesting impact on each type. Black winter and autumn truffles look very similar and are mostly black throughout, but the summer variety is much lighter. Beyond color, the flavor of each truffle is unique. The earthy tones of the winter variety are complemented by chocolate notes while black summer truffles are milder with hints of hazelnut.

When it comes to their price, the varieties are pretty neck-and-neck. Chefs regularly pay up to $800 per pound of black truffle, making this variety the sixth-most expensive on the market.

Like other truffles, the rare black truffle is often shaved and served over pasta. Other chefs add a touch of truffle to risotto or roasted chicken.

Truffles are often found in Europe, but hunters have tracked them down in New Zealand and Australia. 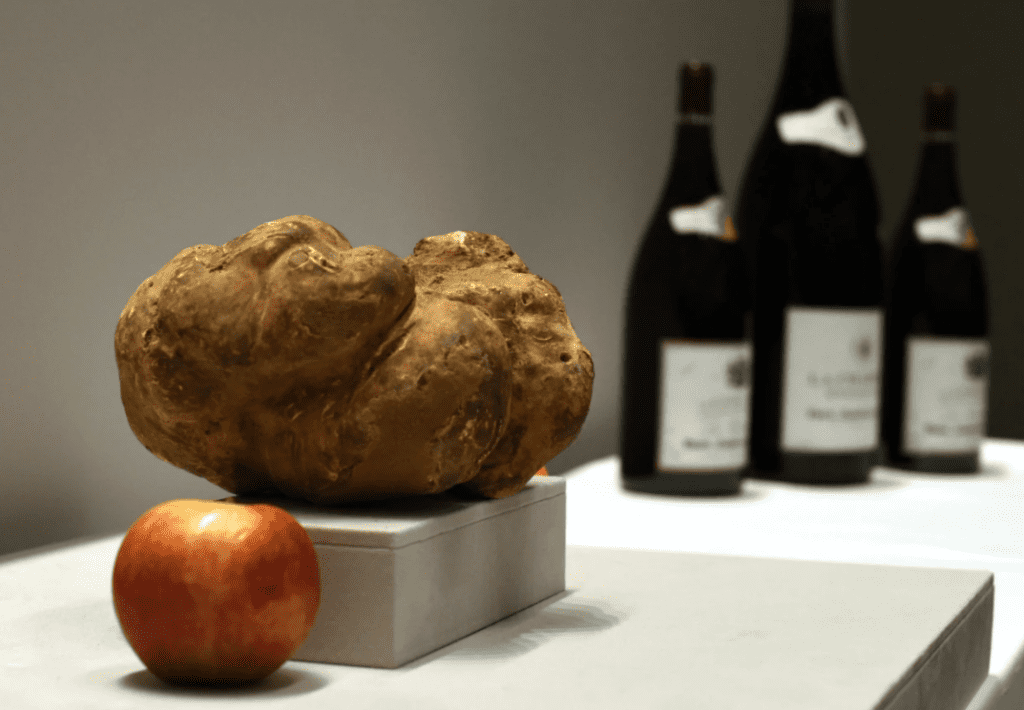 In 2014, a truffle went up for sale at Sotheby’s auction house. The massive white fungus, weighing more than four pounds, was found in Italy and quickly earned international attention. According to the company behind the lucky discovery, buyers from China offered millions of dollars for the rare truffle — but the company didn’t accept. Instead, the owners decided to sell the large fungus at an auction in New York to support Citymeals-on-Wheels and the Children’s Glaucoma Foundation.

The final sale price came out at just over $61,000 — much less than the original offers. It’s not clear why the winning bid was so low compared to other truffles of this size, but the rare fungus still ranks among the most expensive truffles ever sold.

White truffles are often found in Piedmont, a region in northern Italy. Many chefs thinly slice the underground mushroom, then serve it over a dish of polenta. 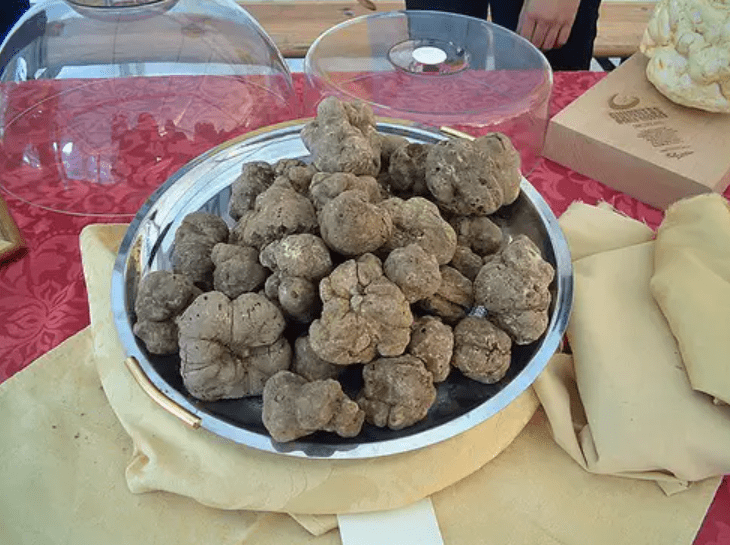 White truffles are rare and a lot of people want them, so getting a good batch all at once can be difficult. But if you have enough money, you might get a solid stock of truffles for your pantry — and that’s exactly what happened with the Russian billionaire’s truffles. The four-pound batch was purchased for nearly $100,000 in 2013 by Vladimir Potanin. Reports say the billionaire might use some of them to make truffle oil, or he could freeze them to preserve their flavor until a good pasta dish comes around.

If Vladimir Potanin doesn’t make truffle oil or freeze his fungi, he might decide to make truffle butter. This involves a slow infusion process where the truffle flavor is blended with butter to make a rich, creamy ingredient — perfect for adding to pasta or risotto. Otherwise, the truffles can be gradually eaten over dishes like fettuccine alfredo. That could take a while though because a single serving of truffle is just ¼ ounce.

Truffles are known as subterranean fungi, which means they grow underground. 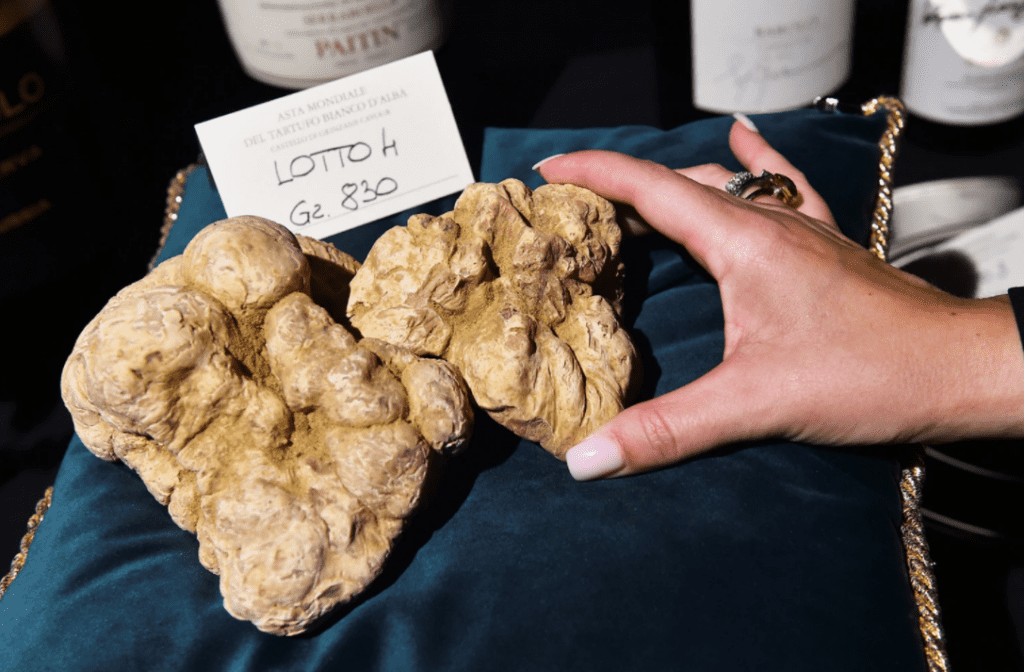 Alba is a big name in the world of truffles. The town is located in Italy’s Piedmont region, that area known for its truffles, and hunters regularly search for the rare fungus throughout the land.

Despite its prominent name, Alba is pretty small. With a population of about 30,000 people, the town is a popular tourist destination filled with beautiful scenery and plenty of delicious food.

A lot of truffles are found in Alba, but one of the most famous is a white truffle that weighed an impressive two pounds. The large fungus was auctioned at Alba’s own White Truffle Auction in late 2021 for a whopping $118,000. Truffles of this kind are typically served with creamy pasta, like this tagliolini dish.

Foodies say this variety offers a slightly garlicky taste, almost like a shallot. The fungi’s more prominent notes are followed by musky tones which are likely the result of the truffle’s underground environment.

White truffles are sometimes called white gold — and it’s not hard to see why considering that price tag. 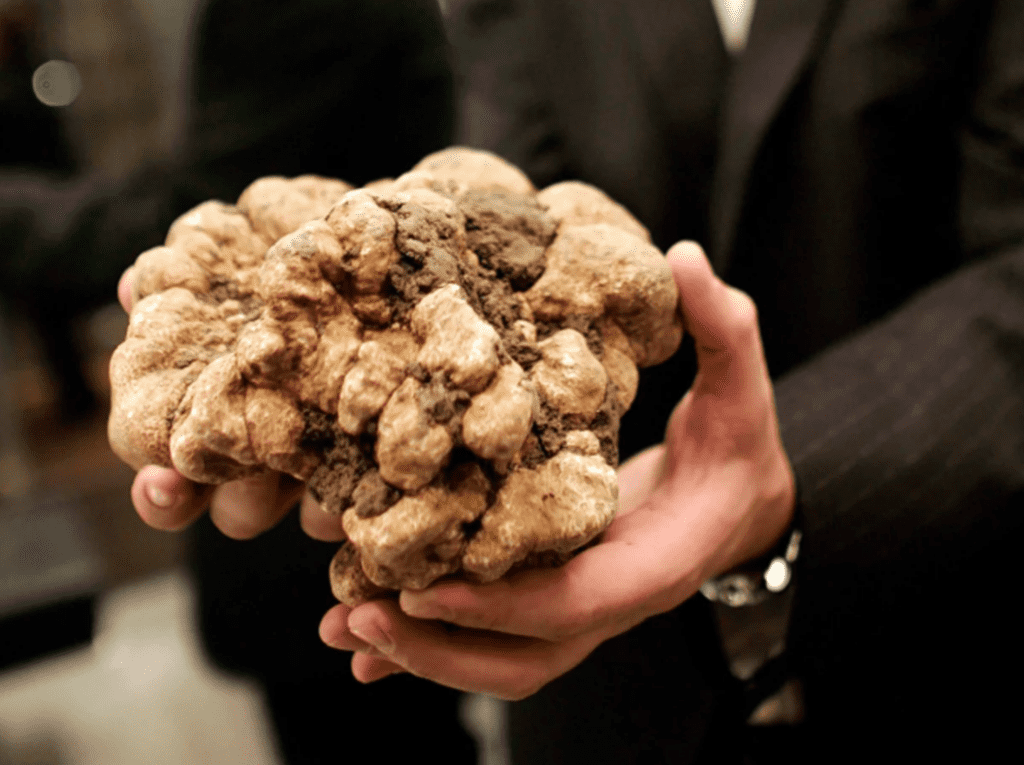 In 2007, a casino mogul named Stanley Ho purchased a white truffle for more than $300,000. The large fungus had a huge price tag, but Stanely is a billionaire — so he could afford it.

White truffles, sometimes called Alba truffles, come from the ground, so they tend to be a little dirty. Chefs fix this by carefully brushing away dirt, but they don’t usually rinse the fungus with water. Home chefs can clean their truffles with a toothbrush, or use a toothpick to get sand from those little crevices.

According to reports, the dog that sniffed out this truffle was named Rocco. 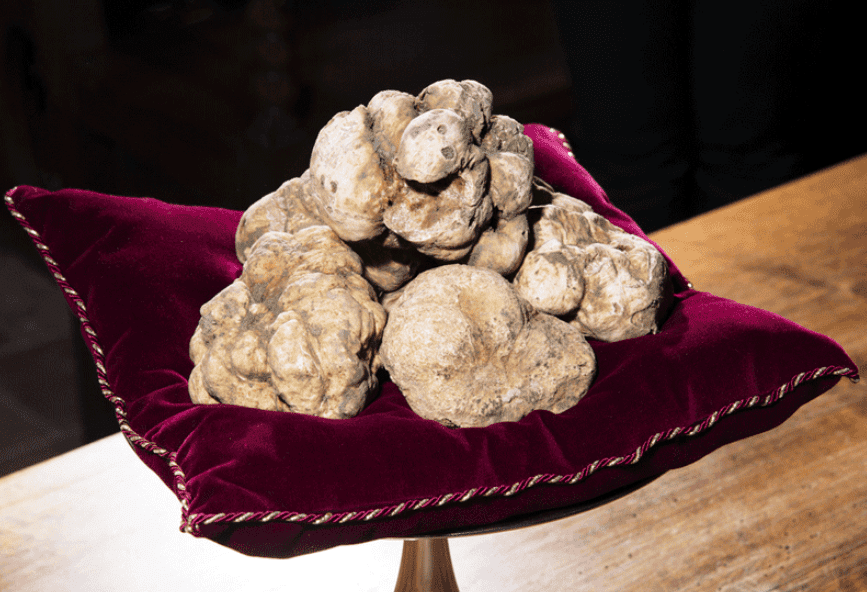 Dubai’s Truffles are the most expensive truffles in the world.

Dubai is known for a lot of expensive stuff. In 2017, the city added pricey truffles to its list of costly attractions when it hosted the annual World Alba White Truffle Auction. The high-dollar event attracted wealthy buyers and brought in an estimated $587,000.

According to reports, proceeds from Dubai’s truffle action were donated to “medical research for the advancement of science.” One person involved with the auction said the event was hosted in Dubai because “[the city was] the right place” to break the world record for the most expensive white truffle ever sold.