The Volkswagen (VW) Beetle has been one of the world’s most recognizable and desirable cars since Hitler first commissioned them in the 1930s. He called them the “people’s car,” hence the name. They were made continuously until the 1970s where they took a 20-year break. Then, in 1998 under the auspices of new factory management, Volkswagen started cranking them out again.

The “punch buggy” has remained a popular people’s car and a sometimes-collector’s item that can fetch hundreds of thousands of dollars at auction. Here’s a guide to the 8 rarest VW beetles of all time. 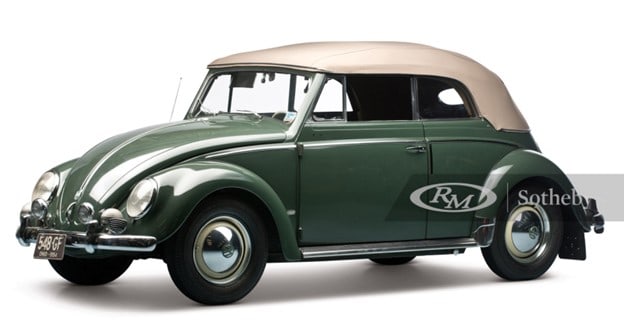 This won’t be the last time we talk about the Deluxe Cabriolet, the Beetles that pulled out all the stops to give their drivers luxury post-war driving experiences. This Beetle evolved from the original Type 1 into this Type 1200 Deluxe Convertible Sedan. For those that love these even today, this is one of the oldest versions.

This car, sold at a Georgia auction in 2013, is one of only 4,740 ever produced. It came with the original floor mats, door panels, glass, and seats. The exterior was repainted in the 1970s, however, the engine bay, trunk, and even the cardboard panels are in their original mint condition. It fetched $66,125 at auction, making it one of the most valuable Beetles in the world.

The Beetle was originally called the Volkswagen Type 1, the result of over 30 short-lived prototypes designed before 1935. The Series 38 is what we now think of as the true Beetle. 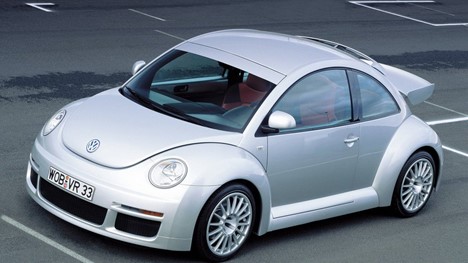 Unlike many cars on this list, the RSi is actually relatively new, announced in 2001 as a limited-edition exotic Beetle, intended as the equivalent of the Porsche Carrera GT. This thing came with a 221 hp VF6 engine and 6-speed manual gearbox.

For racing enthusiasts, the Beetle RSi was a luxury item that now costs as much as an Audi A3. Buying one of these 2001-2003 limited series bugs will set you back around $70,400.

The interior of the Beetle RSi is one of its biggest selling points. The doors and instrument cluster are all grated in carbon fiber and billet aluminum, which gives the car an incredible retro racing feel. To add to the illusion, the seats are bright orange Recaro racing bucket seats. It’s a unique riding experience, to say the least! 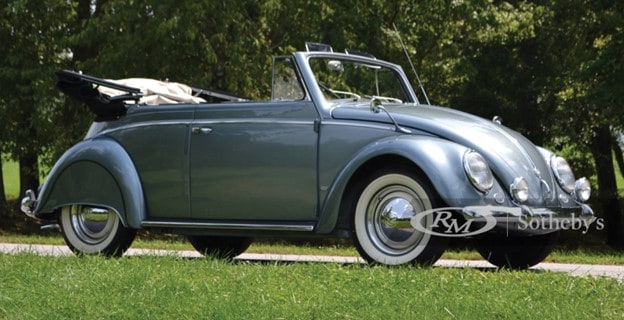 When the 1955 Volkswagen Beetle debuted, it was conceived as a low-cost car produced in the thousands. However, they offered various luxury models that naturally sold in fewer quantities because they were more expensive at the time. These included deluxe models, models with sunshine roofs, microbuses, and this all-of-the-above Cabriolet.

From the metallic paintwork to the trim rings, whitewall tires, wing mirrors, chrome exhaust tip, and twin fog lamps, this Beetle has been restored to every detail, which is why it sold for $82,500. The interior is gorgeous as well, with a panel-mounted bud vase, sun visors, and leather-upholstered bolster pillows.

One of the rarest additions any Volkswagen can have for collectors is the “Deluxe Panel,” which came only with the most expensive models. This featured a gorgeous analog dashboard clock that gives the Beetles their signature rustic charm. 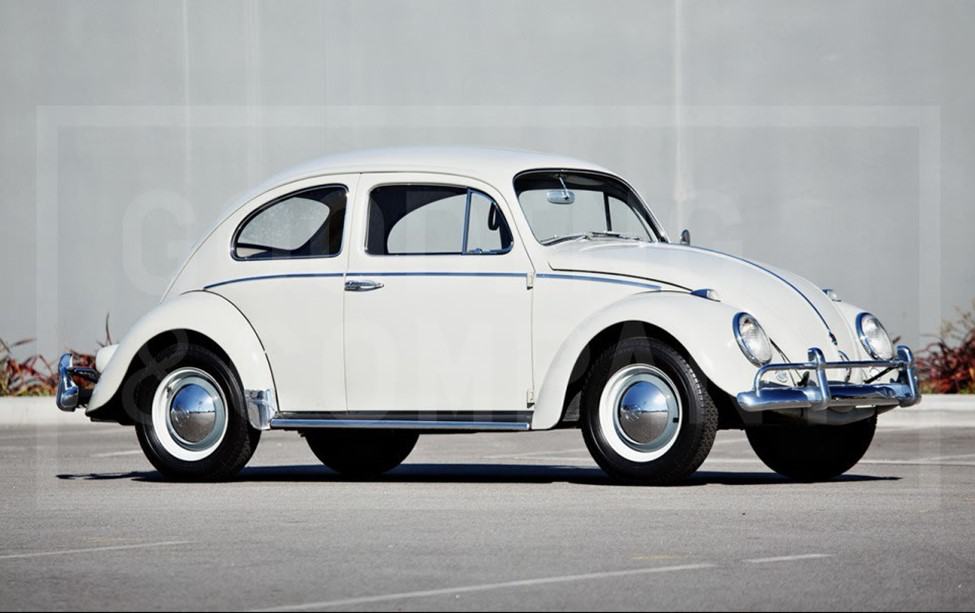 At a celebrity auction featuring a collection of Porches formerly owned by the comedian/TV star Jerry Seinfeld, this 1960 Volkswagen Beetle went up valued at around $45,000. It seems that the celebrity status of the Seinfeld auction attracted some real high-rollers, however, since the value of the car kept going up until it became one of the most prized bids at the auction, taking in $121,000.

Some auction strategists have discovered a possible reason for this. It seems that the lower the starting price of a celebrity item, the more its value will multiply compared to its estimate.

Seinfeld’s Beetle had only driven 15,500 miles since its construction in 1960. This may have contributed to its final price skyrocketing past the estimated value. 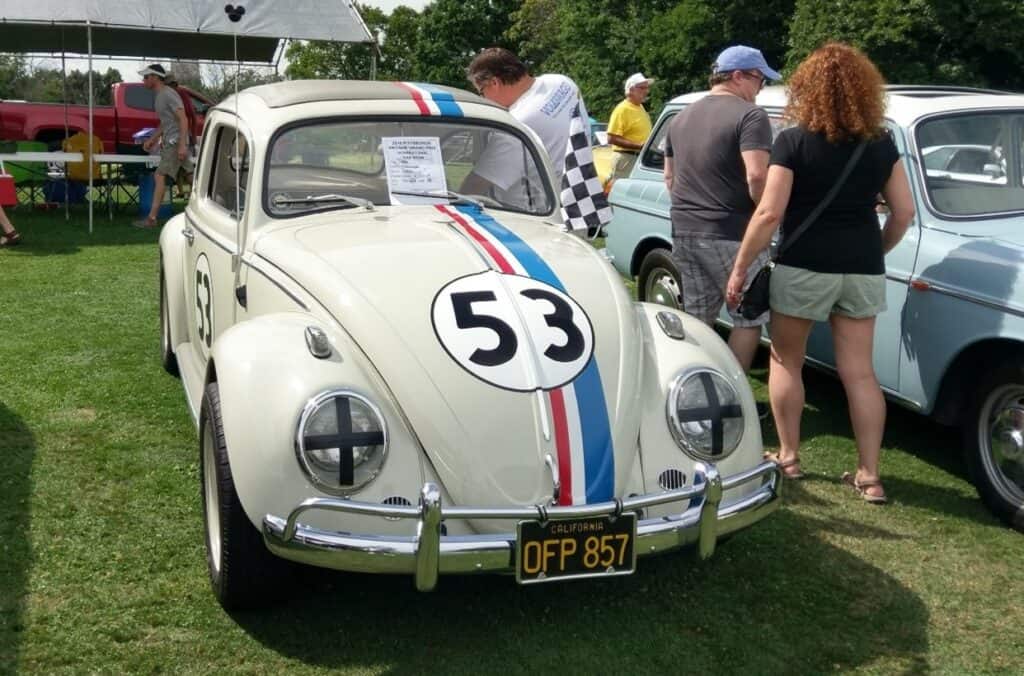 If you’ve ever seen the 1968 live-action Disney film, The Love Bug, you know what a big deal Herbie is. The lovable #53 white beetle from the film has sold for over $100,000 twice in the history of VW auctions due to its celebrity status as movie memorabilia. While keeping in mind that multiple cars can claim to be “Herbie” due to the makes and models used for various scenes and the film’s multiple sequels (over 30, actually), the car considered the “personality” Herbie here sold at a Barret-Jackson auction for $128,700 in 2018.

If you have only seen the reboot, Herbie: Fully Loaded, starring Lindsey Lohan, we are currently shooting you a stare of contempt that can only be fixed by doing the right thing and watching the original.

This Beetle was a deluxe ragtop sedan painted pearl white to make it look more like the L87. The interior may look odd if you see it – this is because it was painted in non-reflective grey paint to prevent camera lights from reflecting off the interior surfaces. Off the assembly line, these surfaces would have been pearl white as well. 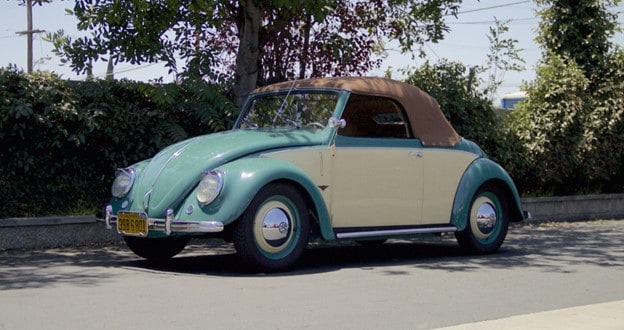 In August 2016, Mecum’s Monterey auction featured this two-door beetle from Karosseriewerke Joseph Hebmüller Söhne. This post-war hooded beetle received a bid for $250,000 but didn’t sell because the reserve wasn’t met. In other words, this piece of history was valued at $300,000 minimum. However, we listed it as the highest real bid.

Hebmüller was founded in 1889 and built horse-drawn carriages until 1919, when they started building automobiles. The Type 14A Beetle Cabriolet is their rarest surviving model. They were bought in 1952 by Ford and incorporated into Volkswagen.

The 14A VW was ordered for post-war production in a reported amount of 2,000 units. However, Hebmüller only finished 696 of the two-seat Beetle Cabriolets before switching to the 4-seat Type 1. This scarcity has driven the insane auction prices of the surviving 14A Beetles. 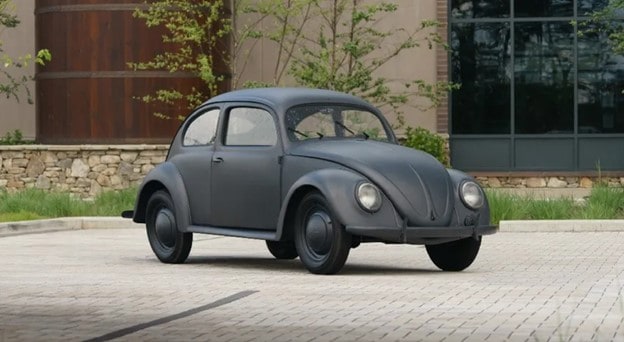 This Type 60 Beetle is another that never sold at auction. The Finest’s Elegance had this up for purchase in 2016, estimated to be valued at $295,000. It never met the reserve, but its rarity speaks for itself.

Not only is the car old, but it has a huge historical significance. This beetle was bought by Berlin’s German Red Cross director in 1943. It was part of a rarely manufactured model – about 40 of them are thought to survive in various conditions.

The Red Cross was originally a volunteer social welfare organization. However, under the reign of the Nazis, it became an organization loyal to the regime, one which underwent an epic power struggle that included introducing Nazi ideology into Red Cross education. After WWII, the Allied Military Government created Law Number Five, which removed the Nazi influence from the Red Cross, creating the organization we know today. 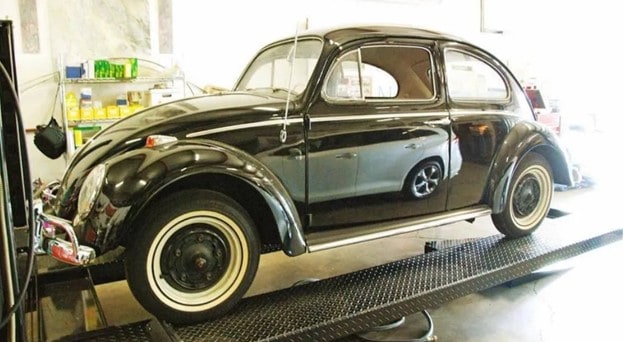 The rarest VW Beetle is this pristine 1964 model. It was purchased in Oregon in 1964 for just over $1,700. Thousands of beetles like this were sold, so you may be wondering why this particular model has an asking price of $1 million. Since no one has ever bought it, we can’t be sure if it’s actually worth that much to anyone.

However, this well-kept, gorgeous car is a time capsule into another era. It has a pristine red and white interior that is as beautiful as it was when it was in a showroom in 1964. We don’t know if it’s worth $1 million, but we know why this is the asking price: it is literally impossible to recreate a car being brand new, no matter how long it’s in the shop.

This car does have something incredibly rare on its side. And no, it’s not a celebrity owner or a part in a famous movie. This 1964 Beetle has only 23 miles on it. That’s right – it’s been rolled between storage facilities but never actually driven. It’s never even seen sunlight until those sale photos were taken. Even the battery has never been turned on.

The Volkswagen Beetle is one of the most recognizable cars in the world. Owning and operating one of these 8 super rare variants places you in the upper echelon of Volkswagen enthusiasts. It will cost you tens or even hundreds of thousands of dollars to get it, but for a piece of automotive history, sometimes no high is too high.

10 Rarest & Most Expensive PS4 Games Ever

10 Rarest and the Most Corvettes Ever Produced