10 Rarest and the Most Corvettes Ever Produced

The Corvette was first produced in 1953 and has since become one of the most iconic American sports cars ever. With decades of production and different options offered every year, rare and unique Corvettes were made. Unfortunately, very few of these special Corvettes exist today, only adding to their value and rarity. Some of the Corvettes on this list are so rare, that they aren’t even for sale and only reside in museum displays. 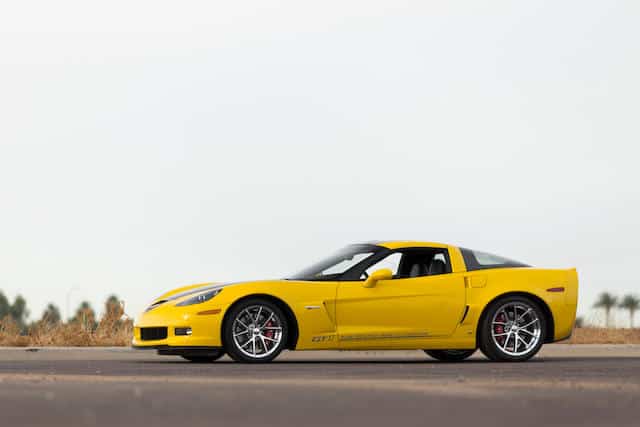 Each of the GT1 Championship Corvettes featured a special engine cover with carbon pattern and yellow Corvette lettering. 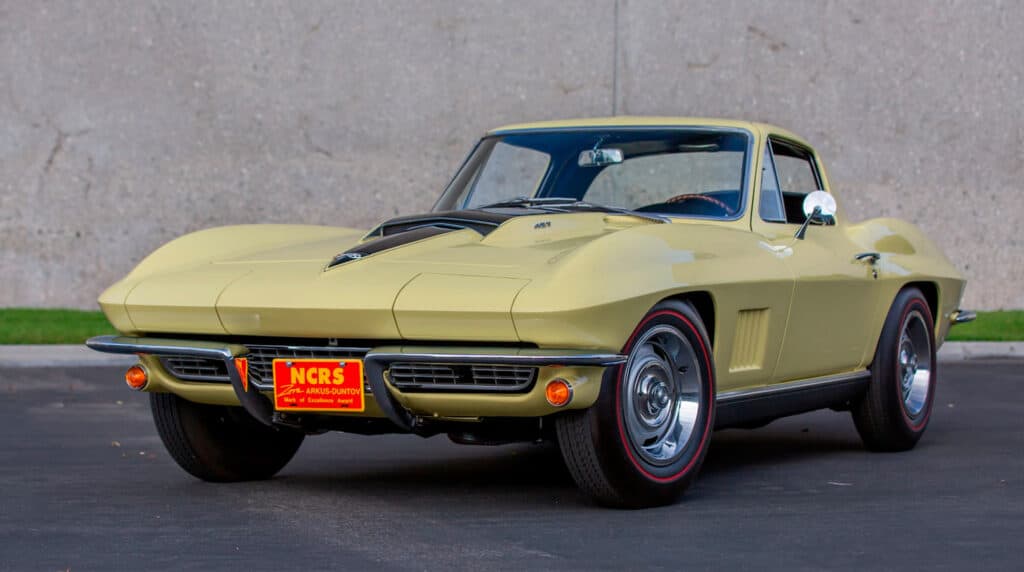 Although they both came out in the same year, the 1967 Corvette L88 and L89 couldn’t be anymore different. Because the L89 is pretty easy to fake, when one is found people don’t really get that excited and the cars don’t sell for nearly as much as the Corvette L88, which is considered one of the holy-grails of the Corvette world. The L88 designation means the car packs a 7.0-liter V-8 (hence the “427” on the hood), 4-speed manual transmission, and a Positraction rear differential.

The L88 engine is technically rated at 430 hp, but it really output more than 500 hp because the unique parts used on the engine were typically reserved for race engines at the time. 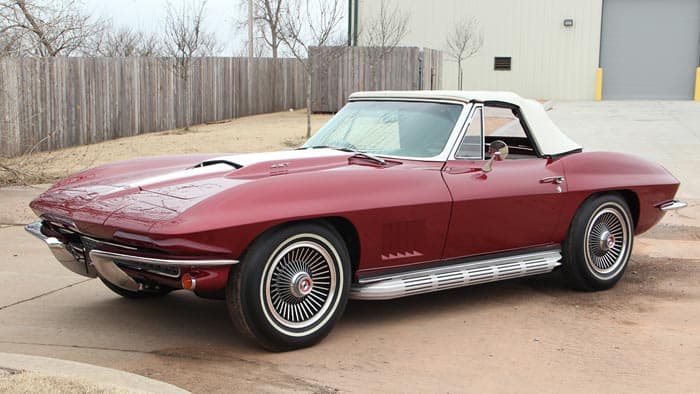 1967 was the last year that Chevrolet offered the C2 Corvette model and like any year there were many unique options, include the L89 aluminum head option. Since the L89 engine essentially turned a standard Corvette into a race car, only 16 Corvette L89s were ordered in 1967. While this option produced no power advantage, it did reduce engine (and hence, vehicle) weight by roughly 75 pounds (34 kg).

A majority of the 1967 Corvette L89 cars don’t have proper documentation, which makes faking one fairly easy, especially if the correct vintage aluminum heads can be found and switched out. 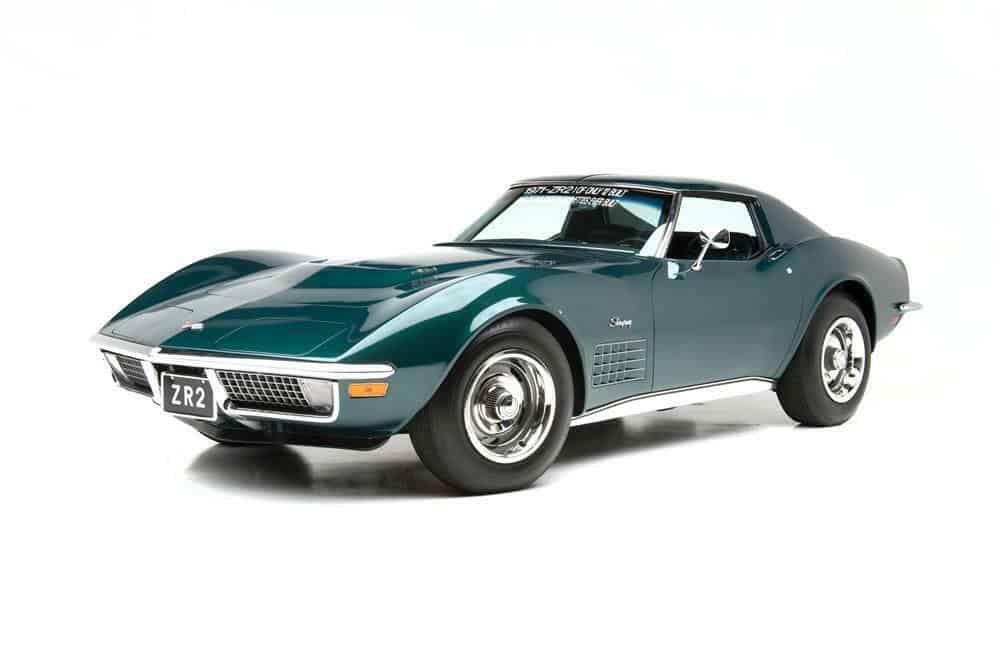 As a follow up to the Corvette ZR1 option initially released in 1970, Chevrolet came out with the Corvette ZR2 in 1971. The ZR2 special engine package cost $1,747 (about $11,612 today) and included the special equipment in the ZR1 package, but for the 454 LS-6 engine. This high performance option also included a Muncie M-22 transmission, twin-disc clutch, heavy duty brakes and suspension with larger anti-sway bars, and an aluminum radiator to help cool all those horses. Only 12 Corvette ZR2s were built in 1971 and two of those were convertibles. One of the those convertibles was put up for sale in 2019 for about half a million dollars.

For many years people believed that the “ZR” in the Corvette ZR1 and ZR2 stood for “Zora Racer” as an homage to legendary Chevrolet Corvette engineer Zora Arkus-Duntov. However, in 2008, Chevrolet finally set the record straight and set that production codes were usually random and had no real meaning. 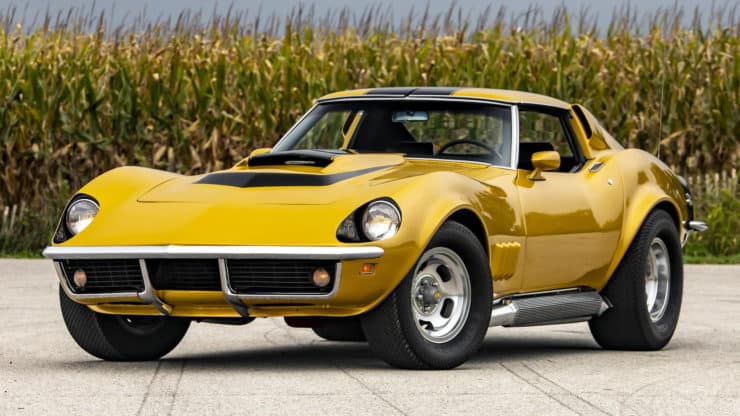 One of the customizations that Baldwin-Motion offered that the official Chevrolet options did not was air conditioning with its highest-horsepower solid-lifter engines. 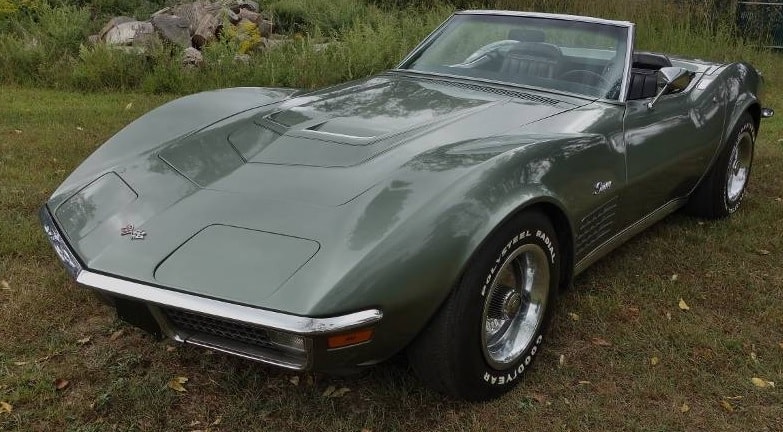 Since the Corvette ZR1 model was meant for competition racing, the car could not be ordered with h power windows, power steering, air conditioning, a rear-window defogger, wheel covers, or a radio. 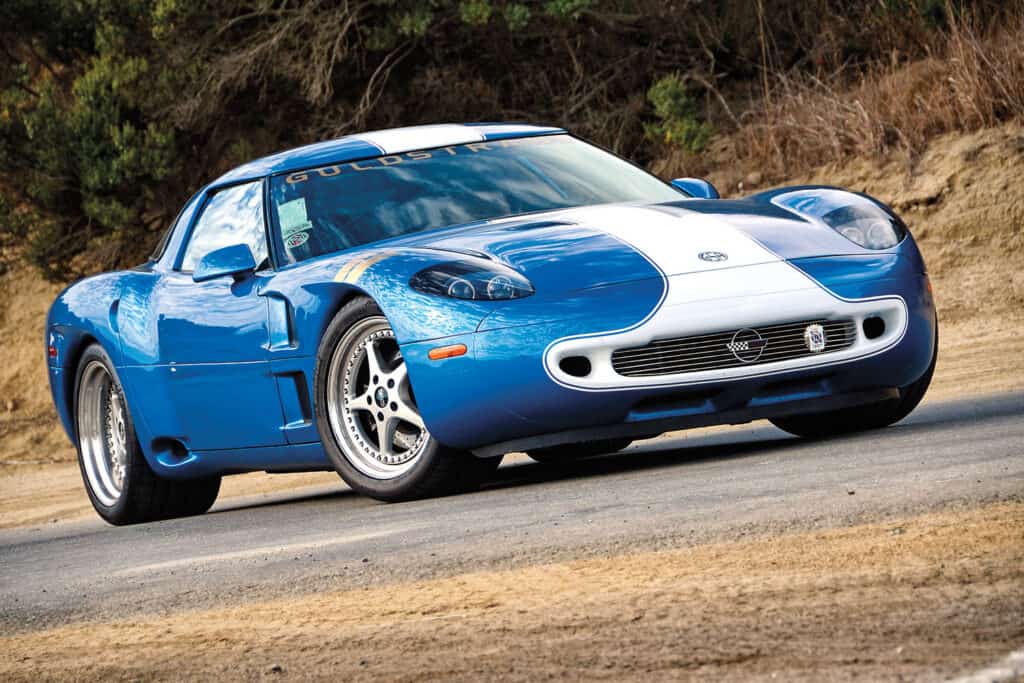 The owner of the Guldstrand GS90 Corvette No. 2, Charlie Budenz, is pretty sure that his is the only one of the six cars made that is not currently in a museum. Budenz believes that three are in Europe, one is in Detroit, and the other one is in Los Angeles. 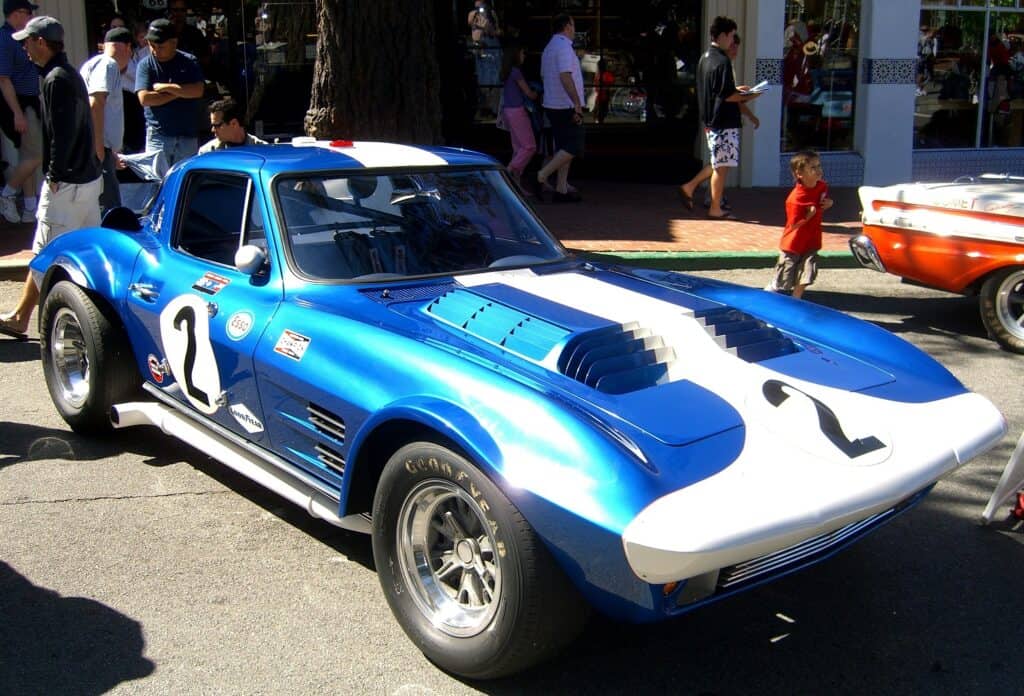 The 1963 Corvette Grand Sport is not only one of the rarest Corvettes, it is also one of the most memorable racing cars ever produced. The 63′ Grand Sport came out during a time when the American Manufacturer’s Association (AMA) was cracking down on factory-supported racing and Chevrolet decided to back off a bit on making racing cars. However, not everyone at Chevrolet listened and in 1963, Zora Arkus-Duntov developed the Corvette Grand Sport. The Grand Sport was a lightweight version of the 1963 model featuring an aluminum block 377 cid V8 engine that developed more than 550 horsepower.

Initially, there were plans to build about 125 of these new Corvette Grand Sport cars, but only five made it to production before General Motor’s management increased their enforcement of the AMA racing ban. All five of the 1963 Corvette Grand Sports still exist and are kept in excellent condition. 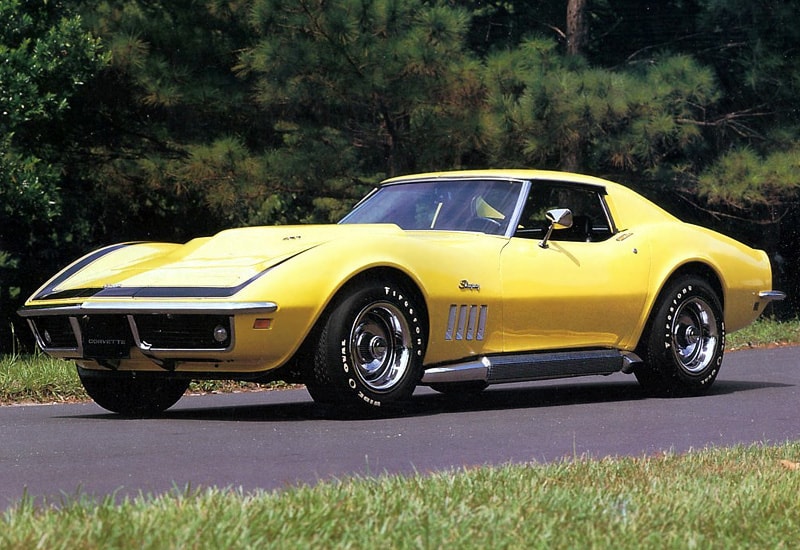 Like some of the other rare Corvettes on this list the 1969 Corvette ZL1 is rare because it was prohibitively expensive. While the base Corvette C3 was fairly affordable the ZL1 option cost over $4,700 (about $34,500 today), which doubled the cost of the car. The ZL1 option was a big-block engine that made the Corvette incredibly fast and was only available in 1969. Due to the cost of the car, only two Corvette ZL1 models were sold. Only one of the cars, the yellow one, the other one was white, is well-documented. Not much is known about the other 1969 Corvette ZL1.

Although the 1969 Corvette ZL1 did not sell well, records from the Tonawanda engine plant indicate that 94 ZL1 engines with Corvette prefixes were built and that most of these ZL1 engines were sold to race car drivers.

Number of Copies Sold or Produced: Only 1 in existence (43 prototypes produced)
Release Date: Technically never, but the C4 was released in 1984
Current Value: Priceless 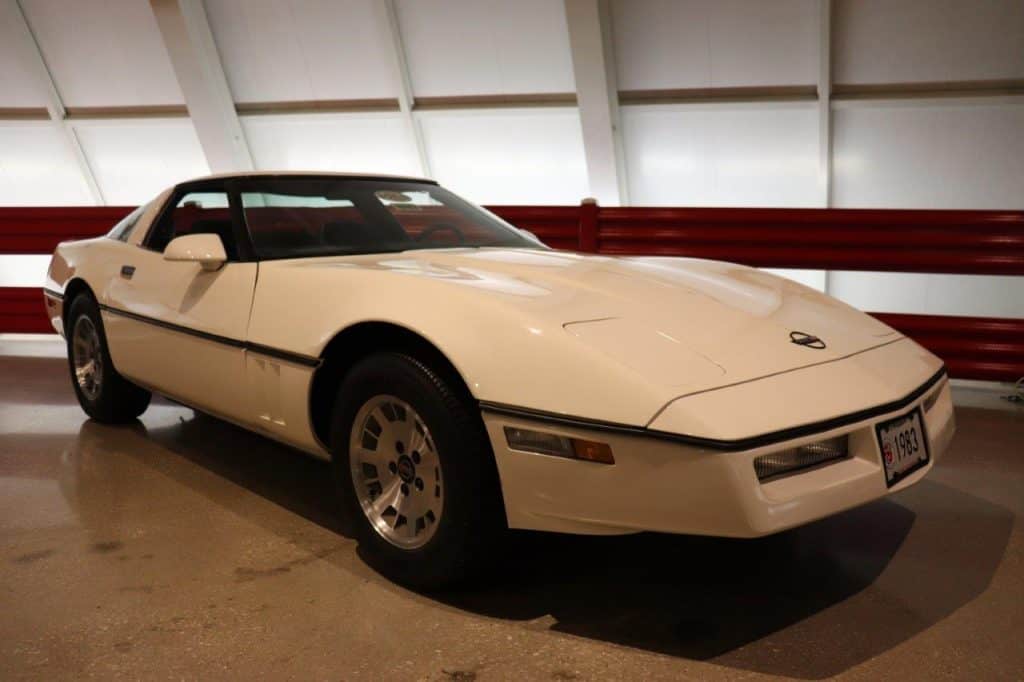 1983 was a weird year for the Chevrolet Corvette as no model was released that year. However, Chevy was working on the new Corvette model, the C4, which was originally slated for a 1982 introduction. This date got pushed back to 1983 and finally to 1984 when the C4 was actually released.

Between 1982 and 1983, 43 prototypes of the Corvette C4 were produced, but nearly all of them were destroyed, which is standard industry practice. But one 1983 Chevrolet Corvette C4 somehow managed to escape destruction. Built on June 28, 1982, it was the fourth out of the 43 prototypes created. The sole surviving 1983 Corvette C4 was discovered abandoned outside of the manufacturing plant in 1984. It was cleaned up and put on display at the National Corvette Museum. The only 1983 Chevrolet Corvette C4 is the rarest Corvette ever in the world and no price tag could ever be applied to the truly one-of-a-kind car.

After the 1983 Chevrolet Corvette C4 was discovered it got an American flag paint job, which was later changed to its original solid white.

10 Rarest and Most Expensive PS4 Controllers Ever