Postal service in the United States had delivered stamp-less letters before introducing adhesive postal stamps issued in the late 19th century. Before, people would seal the letter and hand it over to the post office. Post office workers would then find the receiver and charge the correspondence fee. But with the perforation of postage stamps, the postal system changed to the one we know today.

These small pieces of faded paper commemorate signs of the time with historical faces and events that changed the world. The value and demand for stamps depend on different factors such as issue date, the image on the front side, the origin country, or some blunder or misprint, the most popular one being those with invert errors.

Even with the decline in the use and writing of letters during the 21st century due to electronic mail getting the spotlight, postage stamps are still in high demand among philately (study of postage stamps, postmarks, postcards, etc.) collectors. The following is a list of rarest USA stamps with the most value you would be lucky to add to your collection. 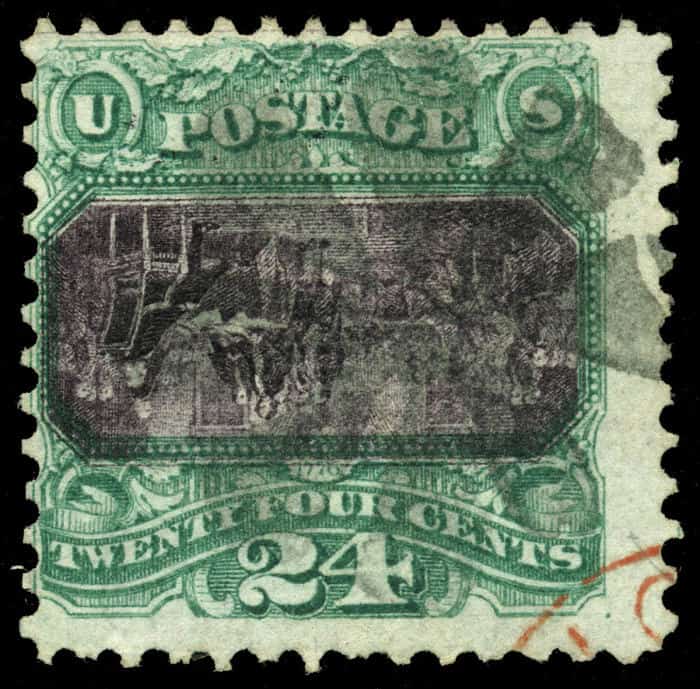 This 24-cent stamp is a masterpiece commemorating the independence of thirteen colonies from the British Kingdom on the 4th of July, 1776. It includes painting the Declaration of Independence by John Trumbull on its face.

This two-colored stamp has G-Grill vertical ridges that point down, used only on this 1869 Issue. This inverted printing error was sold for $1.2 million at Philip Weiss Auctions in 2008, while the block of four sold for $625,000 in the Robert A. Siegel auction.

The stamp is a part of the 1869 Pictorial Issue, representing a series in which USA postage stamps carried different illustrations, from delivery on horseback and steamship to famous paintings and vignettes of Patriotic Eagle. 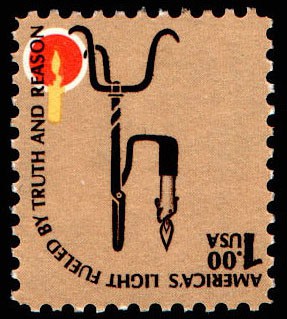 The CIA invert one-dollar contains a postage error and belongs to the Americana series, produced from 1975 to 1981. Only 100 stamps with this error were in print, depicting a colonial rush lamp and a candle holder.

According to a popular belief, CIA agents noticed the mistake in 1986, buying a sheet with 95 remaining stamps to sell them. A block of four of this series sold for $71,875 at the Cherrystone auction in 2021. However, the estimate for a single stamp is around $15,000.

Nine agents who found the almost-complete pane of stamps sold the rest, not telling anyone of the mistake. CIA demanded the return of inverted error stamps once they learned about the truth. 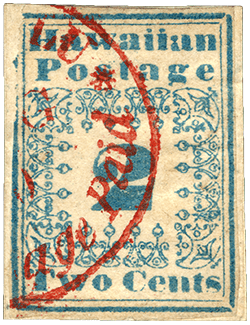 The first postage stamp made in the Kingdom of Hawaii is known as “Missionaries” because of its usage by Christian missionaries working in Hawaii. Hawaiian 2, 5, and 13 cent stamps were used in Trans-Pacific postage, containing charming designs by Henry Whitney.

People used two-cents stamps to deliver newspapers to the US, and they are the rarest of the bunch, with 15 recorded copies in blue color, ten considered private ownership. Siegel Auction Gallery sold the only never-used example in 2018 for $600,000. 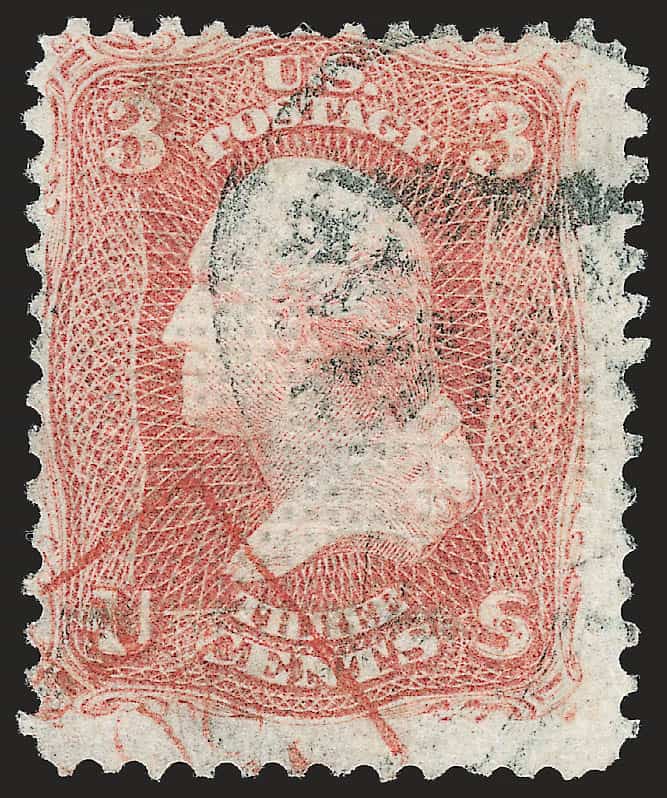 The four recorded B-Grill engraved stamps from 1867 were found together, glued on the used mailing letter. With the face of George Washington on its cover, the four postal stamps have vertical ridges of B-Grill pointing up, the ridges not covering up the entire stamp.

All four stamps were packed in a yellowish letter and sent from Texas to Prussia, where they caused disputes during the transition to C-Grills. The estimated value was around $1 million, but it sold for $900,000 in 2008.

The most popular US postage stamp is from 1993 by a rock singer Elvis Presley, that sold over 120 million copies over the years. 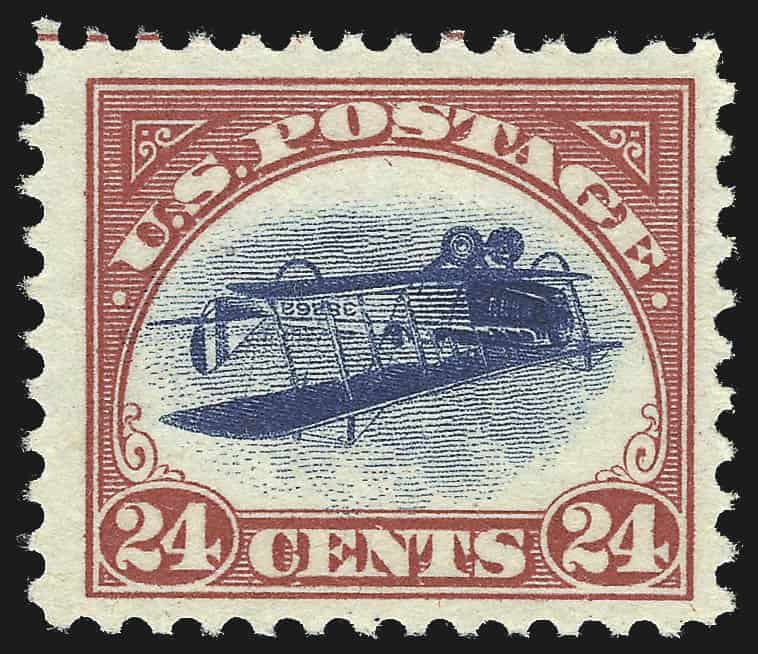 Known as Upside Down Jenny, the 24-cent postage stamp is one of the rarest US stamps as only one found sheet out of a hundred printed. The stamp vignette issued in 1918 contains an image of the Curtiss JN airplane in the center in an upside-down printing error.

Stamp with position number 49 was lost until 2018, when it was discovered in pristine condition, auctioning by Robert A. Siegel Auction Gallery for a new record price of $1,593,000, since the previous record was $977,500 for position number 57.

The Curtiss JN “Jenny” was a series of biplanes made during World War I and produced as a training aircraft. It later became the first plane used to deliver mail instead. 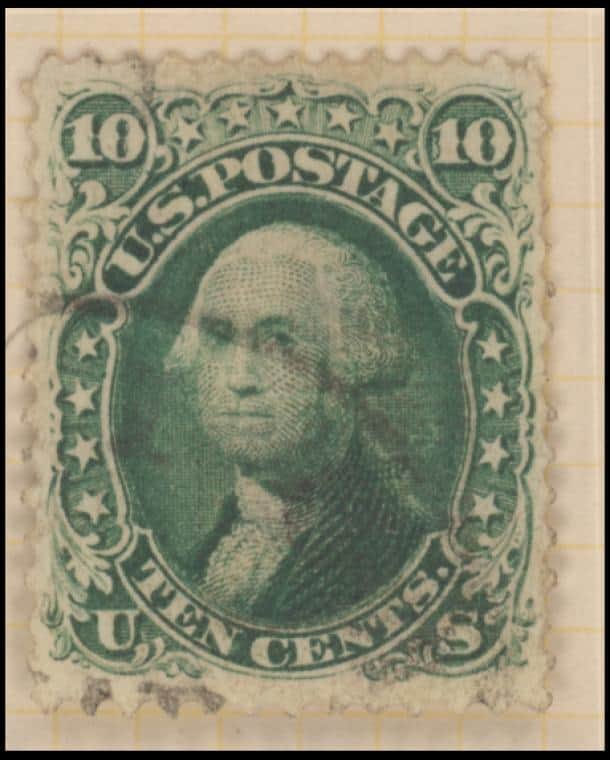 The stamps with the faces of United States presidents are still valuable today due to printing preferences, despite their face frequency. Washington 10-cent was among them, as it included a different type of horizontal ridges – Z Grill indentations.

With only six copies of these stamps existing, this stamp is one of the principal US philatelic rarities. One of the stamps is currently in Benjamin Miller Collection, kept in the New York Public Library, as it first appeared in 2019 at the Siegel auction, where it sold for $1,000,000.

Approximately eleven types of grills on stamps were embossed between 1867 and 1873. Some grills point up, with most pointing down, Z-Grill being one of them. 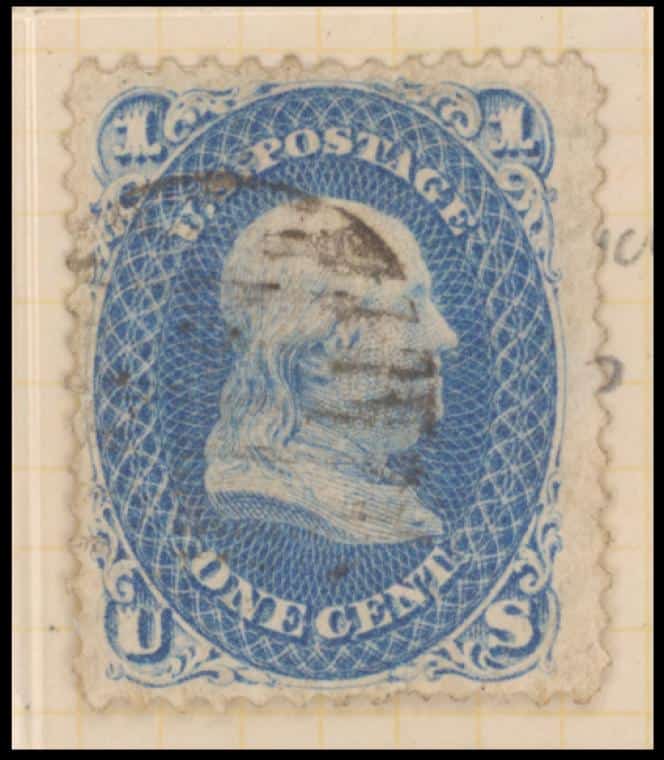 One stamp of Franklin 1-cent is owned by the New York Public Library, while the other is in private ownership of financier Bill Gross who traded a block of four Inverted Jenny stamps worth nearly $3,000,000 for this 1868 postal stamp.

Post Office incised horizontal ridges instead of vertical ones, but this practice was soon changed to more common grills, like D and E-Grills instead. 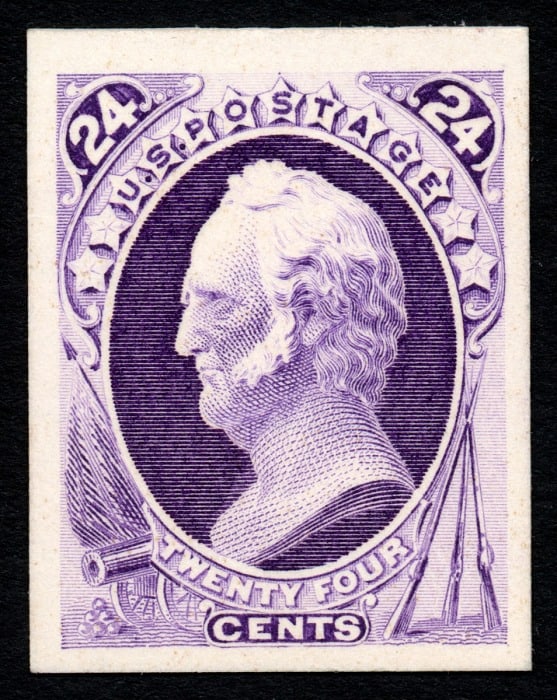 “Continental” is one of the rarest surviving examples of prints by Continental Film depicting General Winfield Scott. The experts tried for years to determine if they printed the stamps as the National Banknote Company did until they proved it by paper comparison.

This one-of-a-kind stamp was sold at a Seigel Gallery auction in December 2004 for $325,000. The 24-cent series continued to be issued by the National Banknote Company in the later years. However, this Continental is still considered a unique variant of an issue. 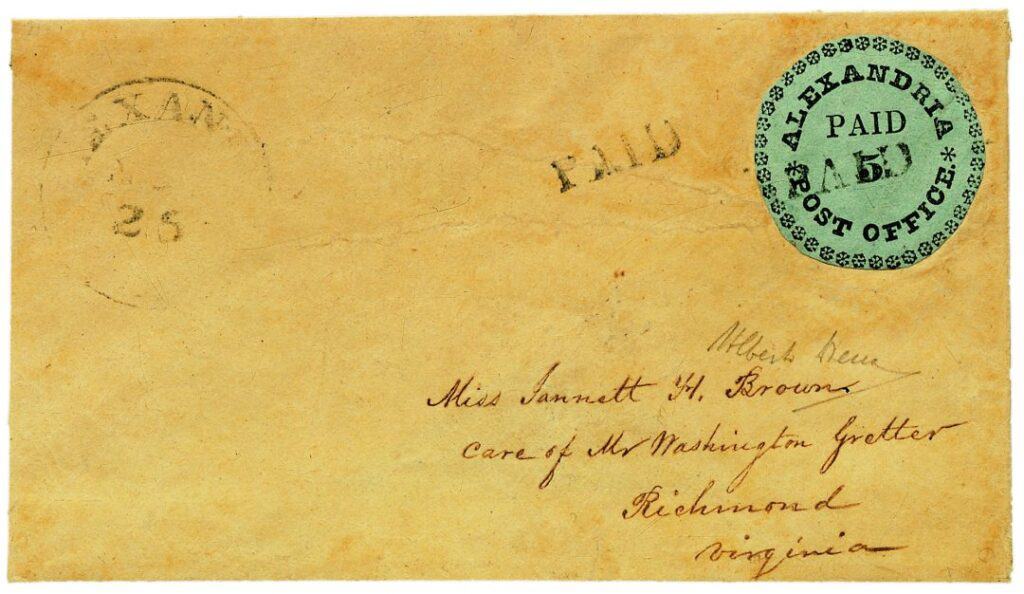 “Blue boy” is among the rarest stamps solely because of its color. It was the only stamp printed on blue paper out of seven knowns from the Postmaster’s Provisionals produced in Alexandria, Virginia. The rest were printed on buff-colored paper instead.

This one-of-a-kind stamp is still attached to the original yellowish envelope, originally mailed between forbidden lovers with a note “burn as usual” at the end of the letter. Luckily, the envelope was saved and sold for $1,000,000 to David Feldman in 1981.

“Blue boy” set the record for the most expensive stamp to sell. This famous philatelic object was auctioned in 2019 for $1,180,000 by H.R. Harmer Auctions, thirty-eight years after the initial sale.

10 of the Rarest and Most Valuable DVD Sets Ever