No one is exactly sure when gold was discovered, but we do know the material has been used for thousands of years. Some of the earliest gold objects were jewelry and other decorative items, but early civilizations eventually started using it as a form of currency. Around 1500 BC., the empire of Egypt made gold the official exchange medium for trade, establishing the Shekel. This early gold coin weighed about 11 grams and became a prominent feature of Middle Eastern life.

Jumping forward in time, the “gold standard” was created by governments as a way of managing the worth of money. This monetary system directly tied the value of non-gold currency (like paper dollars) to the worth of gold. The gold standard was common until the 1930s when Great Britain and the U.S. abandoned the system. Currently, the gold standard is not used by any nation.

Estimated Value: $134,900 or more
Item Origin: England
Period or Year Made: The 15th century
Interesting Fact: This golden book was found in a field 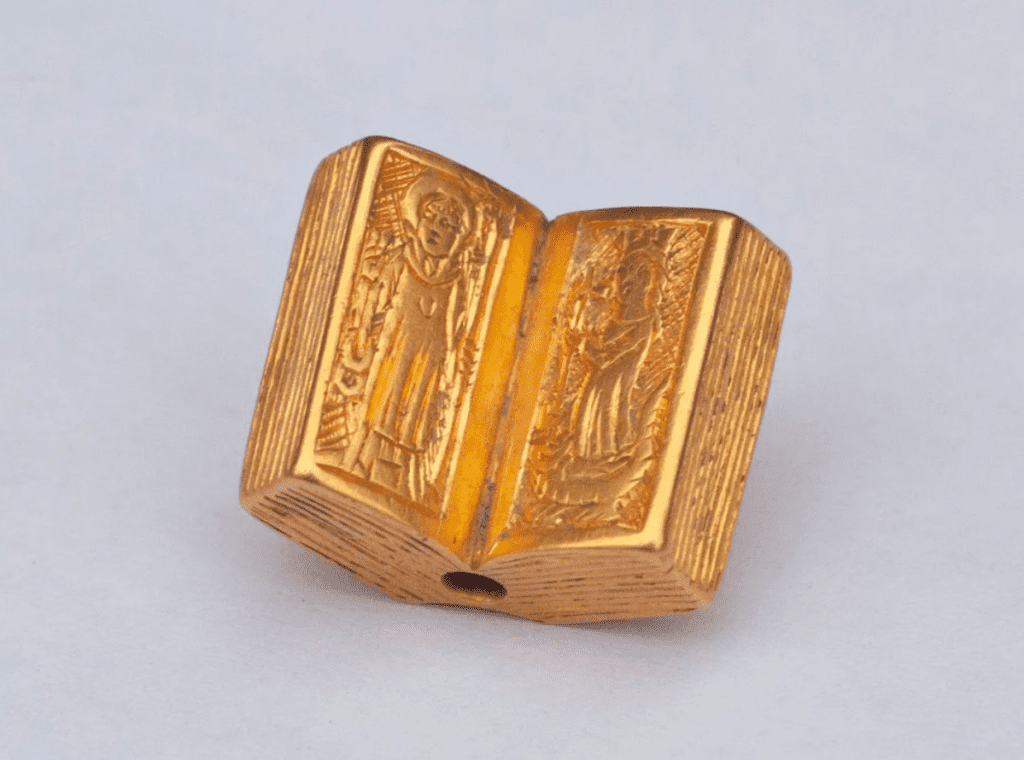 This rare golden artifact was discovered by treasure hunters in England near Sheriff Hutton Castle, an area where King Richard III once lived. Found by Buffy and Ian Bailey, the small golden book measures about half an inch long and dates back to the 15th century.

Given its origin, experts say this rare find may have ties to King Richard III, the ruler of England from 1483 to 1485. In those years, it was illegal for anyone other than the nobility to carry gold. That means the rare golden object was surely owned by someone in the upper classes of society — maybe even a member of the royal family or King Richard III himself.

As per the United Kingdom’s legal system, any proceeds from the sale of this golden artifact would be split between the owner of the land where it was found and the Baileys. Experts say the rare gold book could be worth well over $130,000, ranking it among the most expensive gold objects in the world.

King Richard III died during a battle in 1485, ending his reign. Richard III was the last English king to die in battle. 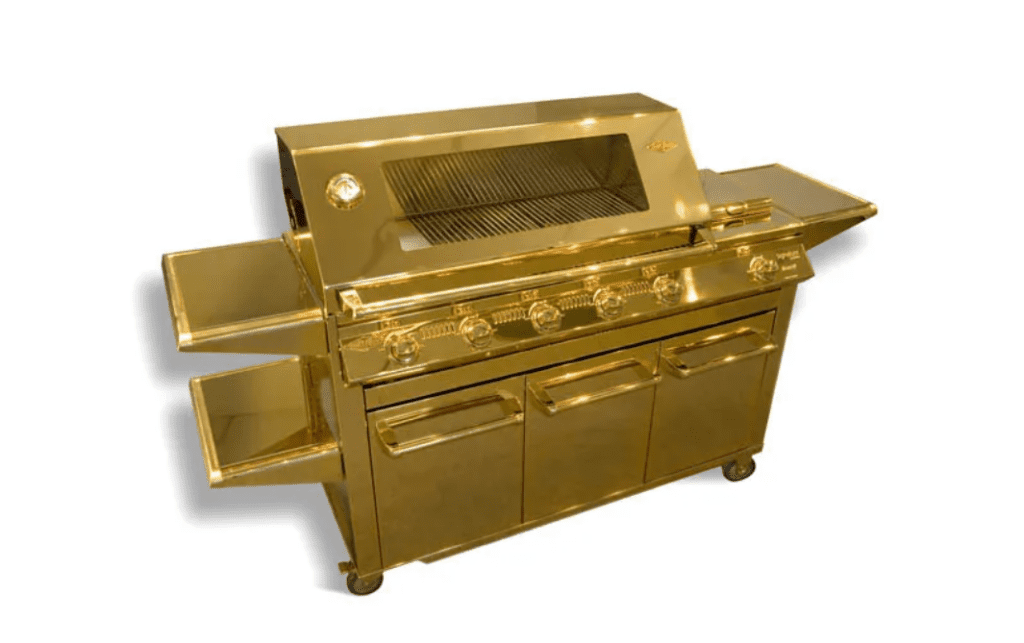 BeefEater is an Australian grill manufacturer known for its wide selection of BBQ and outdoor cooking supplies. The brand has a lot of standard grills you could find in backyards across the globe, but the company dipped into the luxury market with the release of its 24K gold grill. The crazy-expensive design is the same as BeefEater’s Signature SL4000 Series Freestanding grill… except all that gold of course. A company representative said the unique creation is worth about $155,000 — making it the seventh-most expensive gold object on the planet.

You might be wondering if this thing is even usable. It’s a grill afterall, so can you actually cook with it? It turns out you can. Gold melts at 1,945 degrees Fahrenheit, which is about 1,650 degrees hotter than standard grill cooking temperatures.

Gold is one of the descent metals on the planet, but it’s also one of the most malleable and softest. Amazingly, a single ounce of solid gold can be hammered down and spread out to make 187 square feet of gold leaf (a thin sheet of gold).

Estimated Value: $240,000 or more
Item Origin: The Mediterranean Sea
Period or Year Made: The 11th century
Interesting Fact: These golden coins come from the time of the Fatimid dynasty 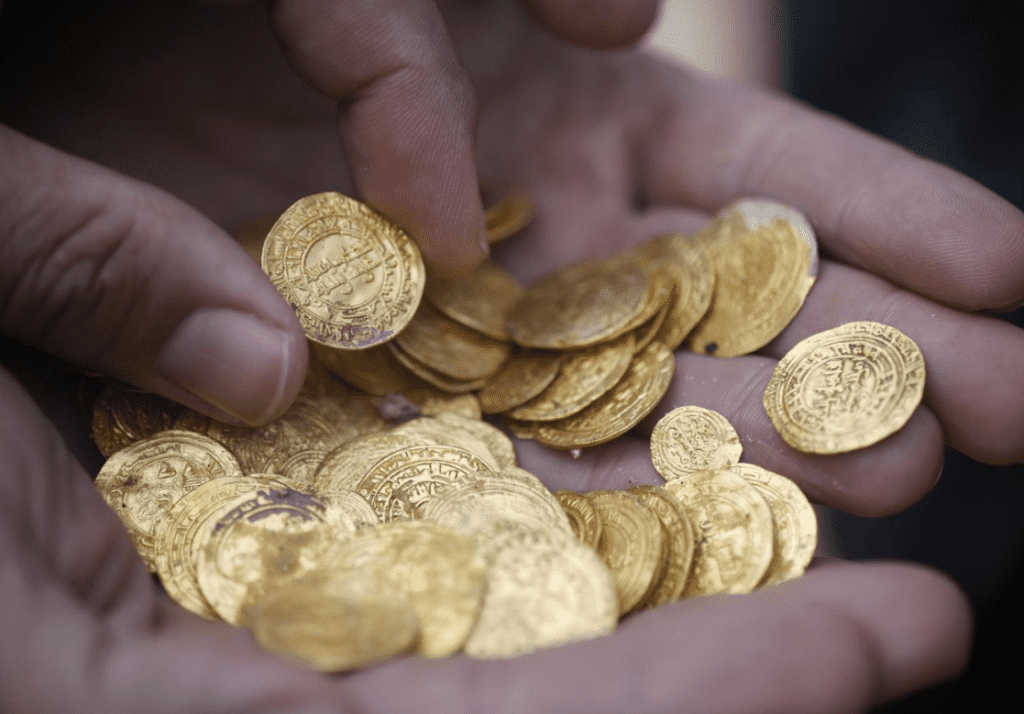 In 2015, divers found a trove of rare golden coins in the Mediterranean Sea near the coast of Israel. The rare find dates back to the 11th century, making these coins some of the oldest golden items on this list. Experts say the coins existed during the Fatimid dynasty, a religious and political ruling group that dominated large regions around North Africa and the Middle East.

Altogether, the divers found 2,000 golden coins. The coins feature Arabic writing and likely ended up at the bottom of the sea because of a shipwreck. In today’s money, these coins were worth about $240,000 when they were created. However, the real current value of these rare coins is likely much higher — mostly due to their rarity and historical significance. Other similar troves of coins have been found in the region, but this batch is the biggest on record for the area.

The Fatimid dynasty was extremely wealthy — experts say it had reserves of about 12 million gold dinars in its capital.

Estimated Value: $2.7 million
Item Origin: England
Period or Year Made: Between the 15th and 16th centuries
Interesting Fact: This golden figure was found in a field in 2017 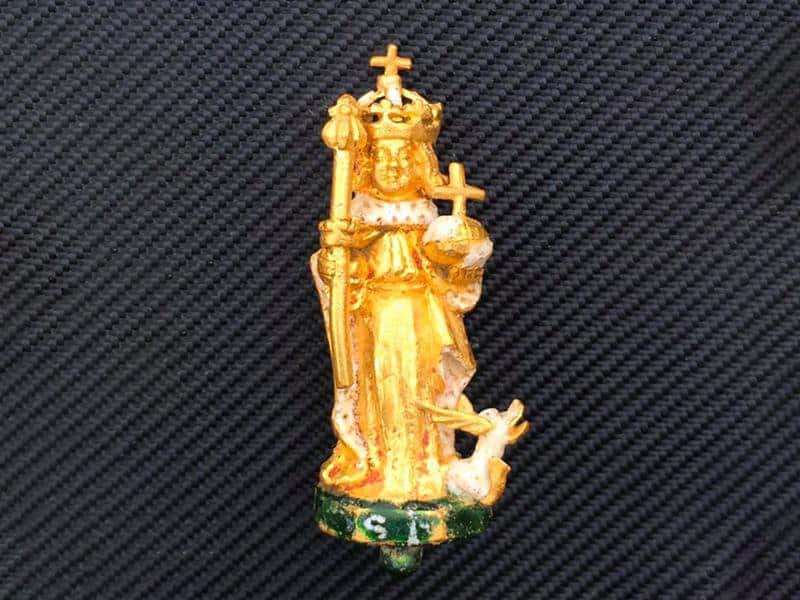 In 2017, a man was walking through a field in England when he thought he saw a piece of foil in the dirt. Stopping to check the shimmering spot, the lucky guy found the one-of-a-kind centerpiece from King Henry VIII’s crown. The golden figure depicts Henry VI and is worth an estimated $2.7 million — making it the fifth-most expensive gold object in the world.

This gold figure stands about 2.5 inches tall. Historians once thought the object was melted down at some point and lost forever, but the lucky discovery proved that wrong.

Kevin Duckett, the man who found this golden figure, said “The rush of adrenaline and the buzz of excitement started to flow through my body…I was holding what appeared to be a heavy solid gold…figurine.”

Estimated Value: 32,020,000 HKD (about $4 million)
Item Origin: China
Period or Year Made: Unreported
Interesting Fact: This item is made of 90% pure gold 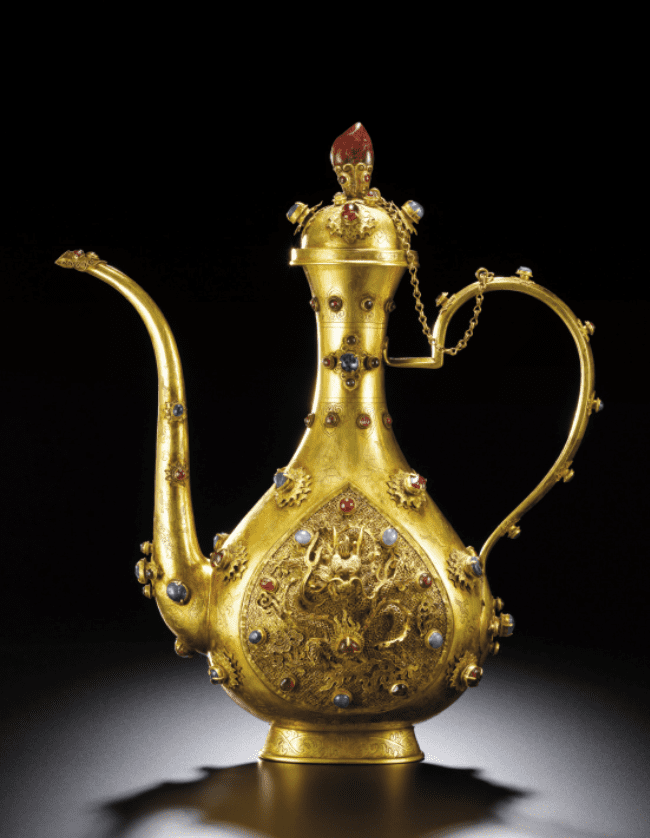 This rare ewer comes from sometime during the Ming Dynasty of China. The beautiful golden object is worth about $4 million according to Sotheby’s (the auction house that sold it).

Experts say the Ming Dynasty ruled China from 1368 to 1644 A.D. During those years, China’s population doubled and the country’s international trade exponentially increased. The Dynasty was founded by Emperor Taizu, who ruled from 1368 until his death in 1398. Taizu was succeeded by his grandson, who was just 15.

Emperor Taizu was born on October 21, 1328 as a poor peasant before rising to power. 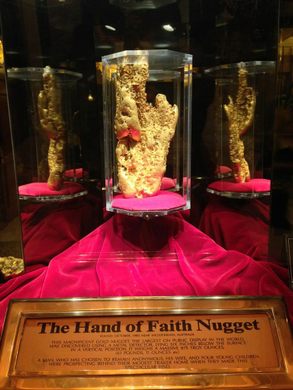 Coming in at number three is the Hand of Faith. This massive chunk of gold was found in 1980 in Australia. Experts say the rare find is worth an estimated $5 million, but it could sell for even more thanks to how famous it is.

The Hand of Faith is kept in Las Vegas, but it was actually found in Australia. The nugget has also traveled around the U.S. — at one point it was available at an exhibition in New Jersey.

This gold nugget was found by Kevin Hillier as he used a metal detector near the town of Kingower, Victoria. Kingower was once a gold-mining town.

Estimated Value: $18.9 million
Item Origin: The United States
Period or Year Made: 1933
Interesting Fact: This coin is one of the last gold coins ever struck for the U.S. 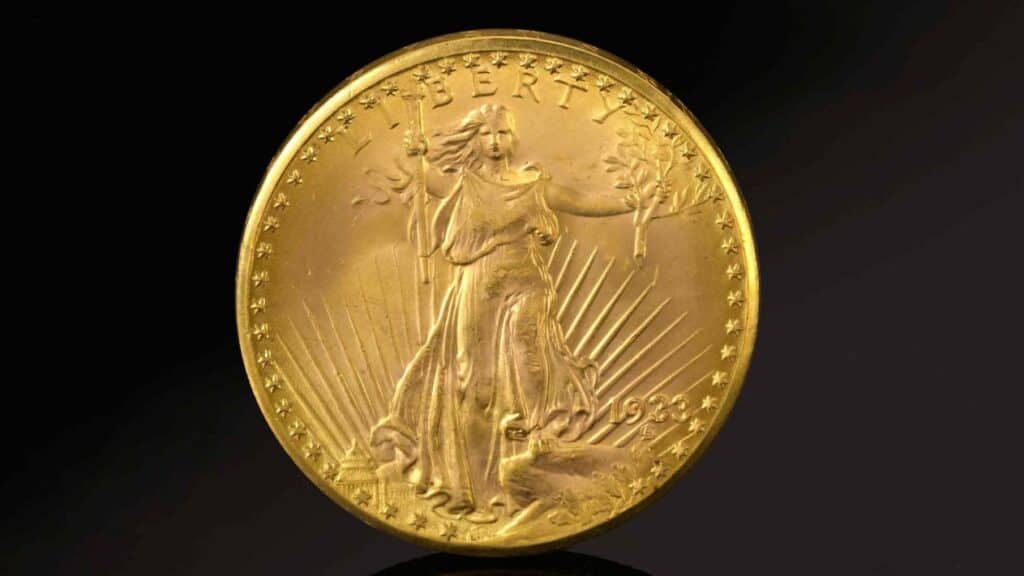 The ultra-rare 1933 Double Eagle gold coin is one of the last golden coins struck for the U.S. Most of these coins were returned to the government when the U.S. banned private gold ownership in the 1930s, but this particular example survived.

This coin has a face value of $20, but it sold at auction for nearly $19 million — making it the second-most expensive gold object in the world. 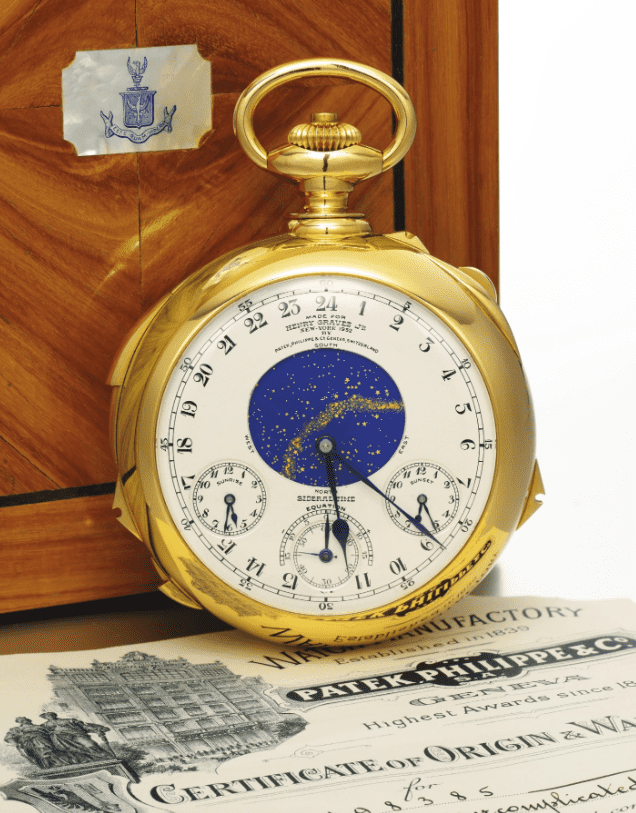 The golden Patek Philippe pocket watch is the most expensive gold object in the world.

With a price tag of nearly $25 million, the golden pocket watch by Swiss watchmaker Patek Philippe is insanely expensive. The rare item was crafted between 1925 and 1932 before it was delivered to the buyer in 1933. The watch was sold by Sotheby’s auction house during its Important Watches auction of 2014 held in Geneva, Switzerland. This watch was lot number 345 from that record-breaking event.

The Patek Philippe company was founded in 1839 by Antoine Norbert de Patek and François Czapek.