Postage stamps are some of the most widely collected items in the world. The seemingly ordinary objects can be worth millions of dollars and generate lots of buzz among the philately (stamp collecting and study of postage stamps) community. Most of the rarest stamps were errors or were issued under very unique/special circumstances. All of the stamps on this list currently exist in very small quantities and they are either held in private or museum collections. 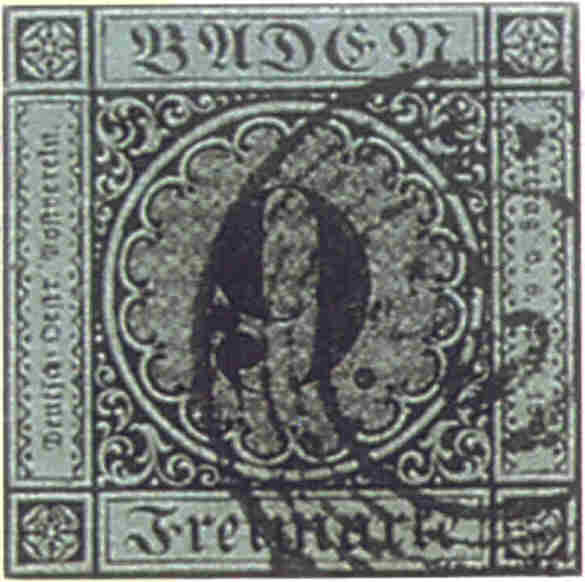 The Baden 9 Kreuzer Error stamp is one of Germany’s rarest and most valuable stamps. In 2019, longtime stamp collector from the United States discovered the rare stamp from the old German state of Baden neatly mounted on an album page in his worldwide collection. This is the fifth known Baden 9 Kreuzer Error stamp. The collector immediately put the stamp up for auction and it sold for €1,524,601.50 (about $1.73 million)! The Baden stamps are rarities because they were printed on blue green paper instead of the correct rose color.

There is only one unused Baden 9 Kreuzer Error stamp known, the other four feature cancellation marks. 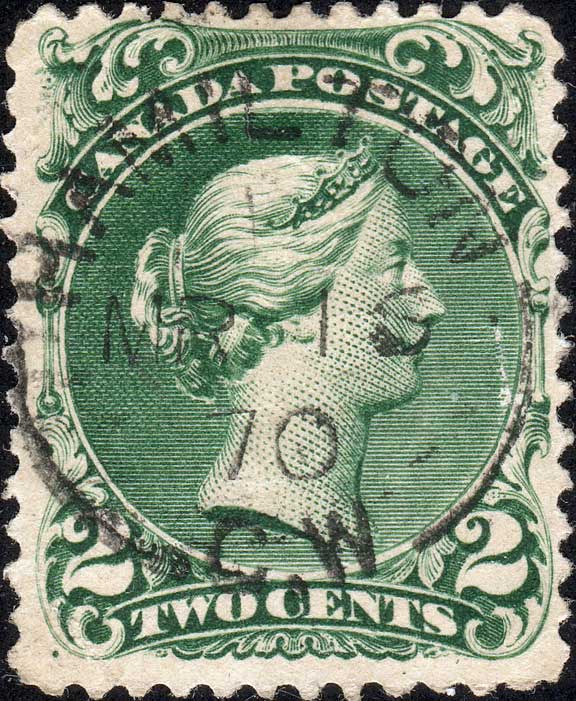 The 2¢ Large Queen on Laid Paper is Canada’s rarest and most valuable stamp. The stamps are so special because they were printed on less desirable laid paper (paper with ribbed texture caused by the manufacturing process) instead of the more typical wove paper. The first 2¢ Large Queen on Laid Paper stamp was not discovered until 1925 and only two additional stamps have turned up so far. The most recently found stamp was sold for about $250,000 in 2013.

No one knows how many sheets of these rare 2¢ Large Queen on Laid Paper stamps were produced, but its believed that many more may lie unrecognized in stamp collections or attached to envelopes. 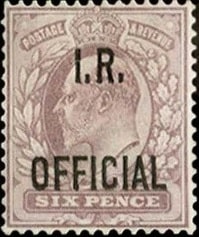 The Edward VII 6d Pale Dull Purple stamp is on of Britain’s rarest stamps. The stamp was issued in 1904 on the same day that official order came into effect withdrawing all official stamps from use. Only 19 sheets were printed by the time the order came out, which means that very few of these stamps have survived. Currently there are only three known examples of the Edward VII 6d Pale Dull Purple stamp. In 2010, the rare British stamp was sold for £400,000 (about $469,000). The other existing stamps are in museums or private collections.

The Edward VII 6d Pale Dull Purple stamp features the overprint “I.R. Official,” which was used by government departments such as the Inland Revenue. It was a criminal offense for members of the public to possess or sell stamps with this mark.

The stamps are rare because they feature an10¢ surcharge mark on what was actually an inverted 9-candareen stamp. In 1897, China’s new Imperial Postal Service decided to start using cents and dollars instead of candareens, but the new stamps took awhile to produce. As a temporary measure, the 9-candareen stamps were marked with the new 10¢ surcharge.

The unused 10¢ on 9 Candareen stamp was previously in the collection formed by Sir Percival David which was sold in London in 1970. 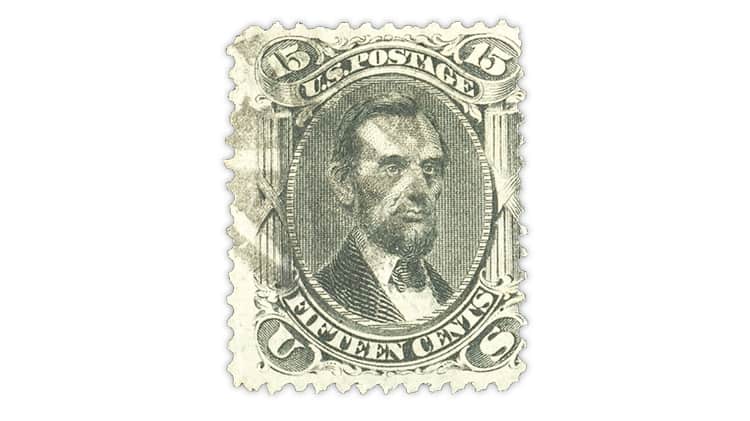 The 15¢ Lincoln Z Grill stamp sold in 2019 was part of a collection that took the consignor-collector 50-years to fill all the spaces in a Scott U.S. National album 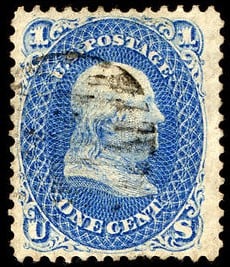 The Benjamin Franklin Z Grill is the most valuable American stamp, worth an estimated $3,000,000. While 1¢ Benjamin Franklin stamps are common, there are only two known examples with a Z Grill mark. The Z Grill was one of several embossed grill patterns used to break the fibers of certain early U.S. stamps. Grilling allows the cancellation ink to be readily absorbed into the paper, thus preventing people from reusing the stamps via washing out the cancellation marks. After two years, the grills were retired because they were impractical, which is why the Benjamin Frank Z Grill stamps are so rare.

Estimated Number in Existence: 1
Country of Origin: United States of America
Date of Production: c.1873
Reason for Rarity: Unique copy proved to have been printed by the Continental Banknote Company
Current Value: $325,000 (price paid at auction in 2004) 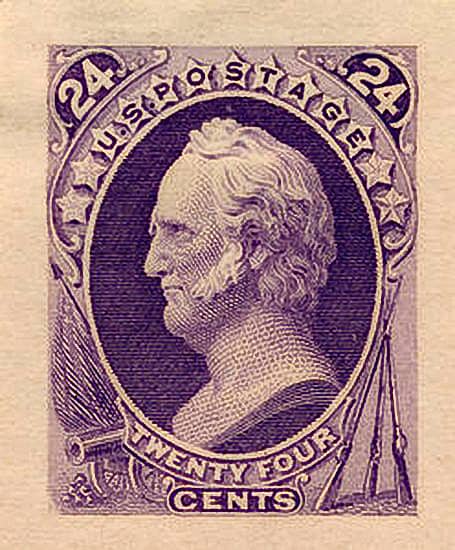 For more than a century experts could not prove that this particular stamp was actually printed by the CBNC, but it was finally certified in 1992. Since no one knows for sure how many other Lost Continentals may be hiding out there, the stamp only sold for $325,000, which is relatively low compared to most of the other stamps on this list.

Records show that the Continental Banknote Company printed 365,000 24¢ stamps, but 364,950 were destroyed as remainders in 1885 and no one knows how many copies actually survived.

Estimated Number in Existence: 1
Country of Origin: United States of America
Date of Production: 1847
Reason for Rarity: Only one produced
Current Value: $1.18 Million (price paid at auction in 2019) 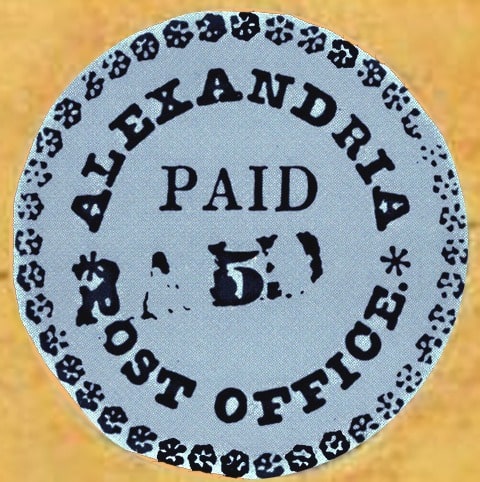 The Alexandria “Blue Boy” Postmaster Provisional is one of the rarest stamps from the United States. The rare stamp dates back to just before the U.S. began issuing national postage stamps. Although the introduction of a national stamp system officially prohibited the use of the provisional stamps, the Alexandria Blue Boy was still valid in Alexandria, when it was in the process of being retroceded from the District of Columbia to the state of Virginia. The Alexandria Blue Boy was last sold in 2019 for $1.18 million.

The Alexandria Blue Boy Postmaster Provisional stamp was actually used and is still attached to the envelope on which it was originally mailed. 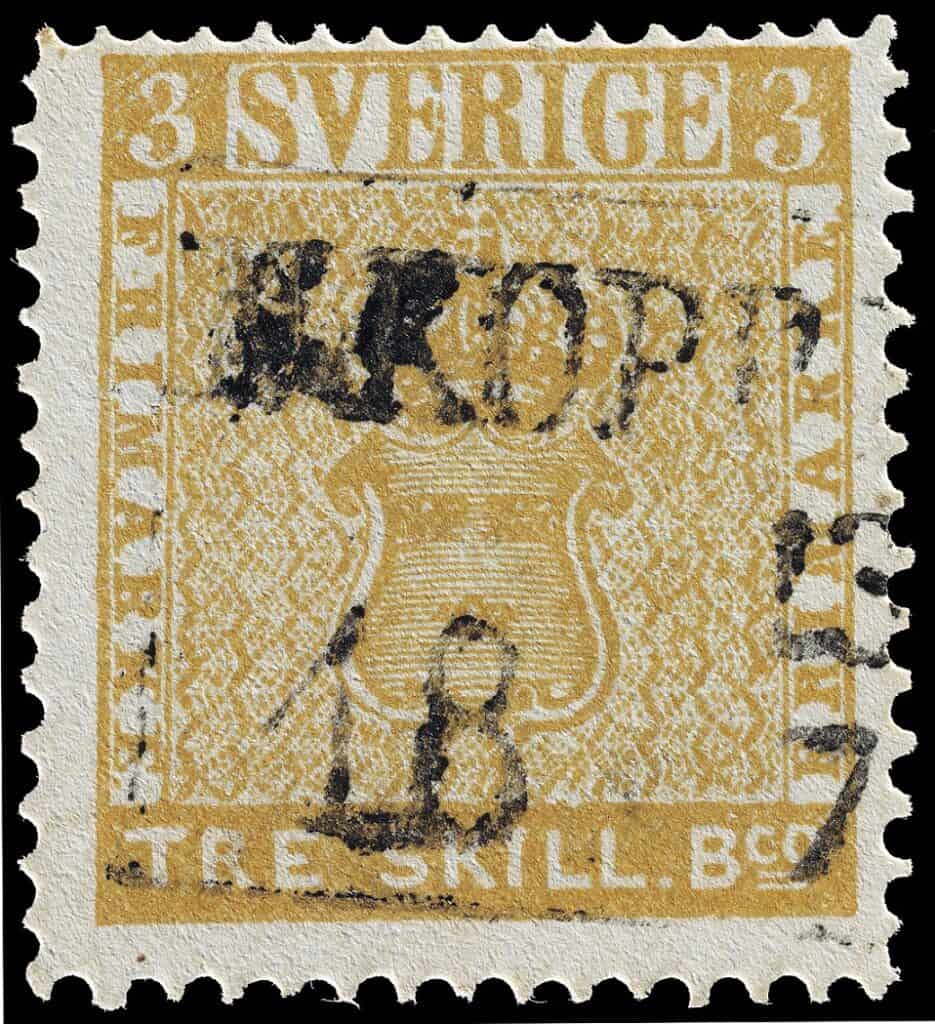 
The Treskilling Yellow is another rare mid-19th century stamp that is worth millions of dollars. The stamp is a rare printing error as Sweden’s three-skilling stamps were normally printed in a blue-green color. The eight-skilling stamp was printed in a yellowish orange, which is the color of the rare Treskilling.

No one actually knows the current value of the Treskilling Yellow because the amount it sold for during its last few sales has remained private. It was sold in 1996 for 2.8 million Swiss Francs (about $2.3 million) and the stamp was reportedly sold for at least that much in 2010. In 2013, the Treskilling Yellow was acquired by Count Gustaf Douglas, a Swedish nobleman and politician for an undisclosed amount.

The number of Treskilling Yellow stamps printed is unknown, but the error went unnoticed for a few years. The only known Treskilling Yellow was discovered in 1886 by a young collector named Georg Wilhelm Backman, who was going through his grandmother’s old letters. 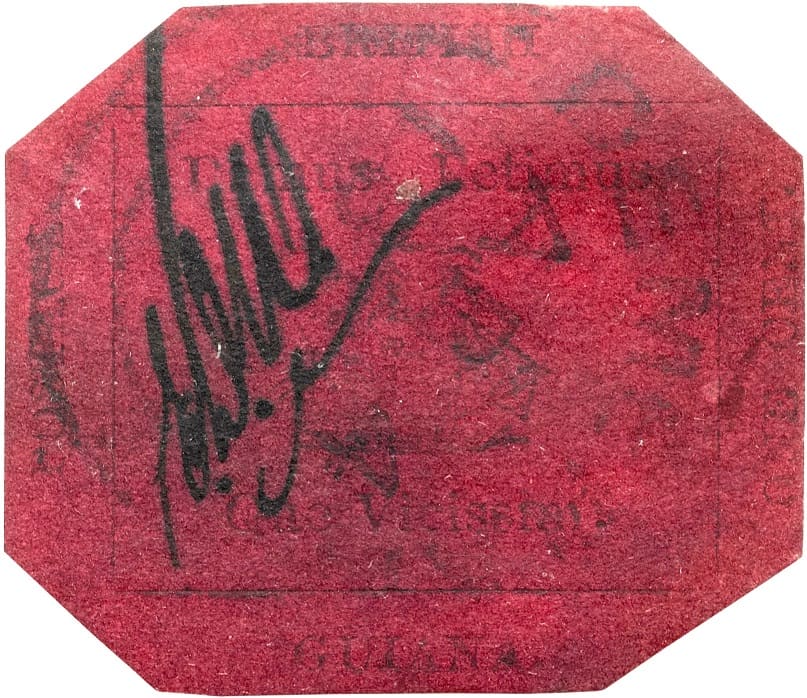 
The British Guiana 1¢ Magenta is the rarest and most valuable stamp in the world. The deceptively valuable stamp isn’t much to look at, as it’s just octagonal scrap of magenta paper bearing a postmark and illustration of a three-masted ship. However, there is only one in existence and it sold for an eye-popping $9.48 million in 2014!

The stamp is so special because it was issued as an emergency by the Postmaster of British Guiana at the time, E.T.E. Dalton, after an expected delivery of proper stamps from Great Britain did not arrive. Although Dalton issued specifications about the design, the printer chose to add a ship image of their own design. To prevent forgery, Dalton ordered that all correspondence bearing the stamps be autographed by a post office clerk. So far, no other copy of the British Guiana 1¢ Magenta has ever turned up.

The current owner of the British Guiana 1¢ Magenta stamp agreed to put it on display for the public for the first time at the National Post Museum of the Smithsonian Institution from 2015 through 2018.