During the height of their popularity in the 1990s, Beanie Babies were an inescapable part of American life and appeared everywhere. The unassuming plush animals whipped people up into a frenzy and everyone was sure that they would someday become valuable collectors’ items. Unfortunately, Beanie Babies did not have longevity and even disappeared completely before returning in a modern format. However, there is still an active Beanie Baby collectors community and while Beanie Babies aren’t worth tens of thousands of dollars like people had hoped, some of the rare ones are still pretty valuable. Even today, the rarest Beanie Babies are worth a few hundred dollars and sometimes in the low thousands.

There is a lot of misinformation out there saying that errors make certain Beanie Babies worth tens of thousands of dollars. According to serious Beanie Baby collectors this is not true at all and generally, the rarest Beanies are 1st generation Beanies in mint condition. Very few Beanie errors are actually worth any money – these valuable errors are featured on this list. 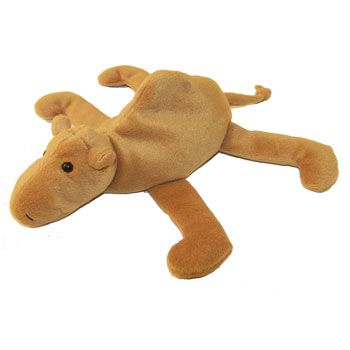 Unlike most of the other Beanie Babies on this list, Humphrey the Camel was not released with any unique errors. Humphrey is rare because he was only available for about a year and was one of the first Beanie Babies to be retired. Only about 25,000 Humphrey Beanies were ever produced. Original Humphrey Beanies with intact hang and tush tags can sell for a lot of money. One current eBay listing has a good condition Humphrey priced at $719.

Humphrey was made into one of the original nine Beanie Buddies (large Beanie Babies) released in 1998. 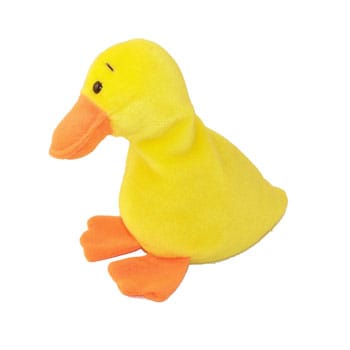 
For some bizarre reason, Quackers the Duck was originally released without any wings. Despite the error, wingless Quackers was available for over half a year and wasn’t retired until January 7, 1995. While no official production numbers have been released, it is estimated that about 780 or so wingless Quackers were sold before wings were added. On top of being wingless, some Quackers had a misspelled name tag featuring the name “Quacker.”

Quackers without wings had a tendency to lean to one side, but after it was re-released with wings, Quackers was able to sit upright. 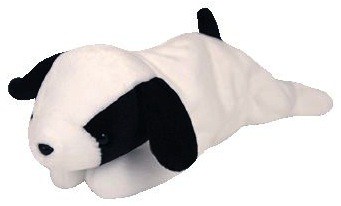 Spot the Dog was initially released without its signature spot on its back. This obvious error was quickly fixed and the spotless Spot Beanies were not available for very long. Spot Beanies without the spot are one of the few errors that are actually considered valuable by Beanie Baby collectors and are still worth a few hundred bucks when they go up for sale. 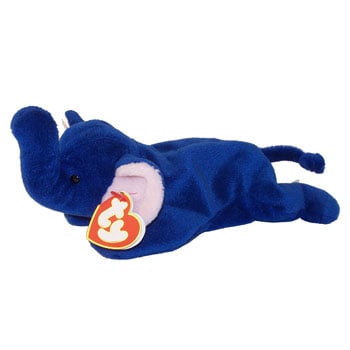 
Peanut the Elephant was originally released in a vibrant royal blue color, but this was later deemed a mistake. Like the other error Beanie Babies on this list, the Royal Blue Peanut was quickly retired and re-released with the correct coloring, a light blue. It is estimated that about 500 or so Royal Blue Peanut Beanies were produced and sold.

Despite being an error, Royal Blue Peanut was so popular that Ty released a Beanie Buddie in 1998 and a McDonald’s Teenie Beanie in 2000. 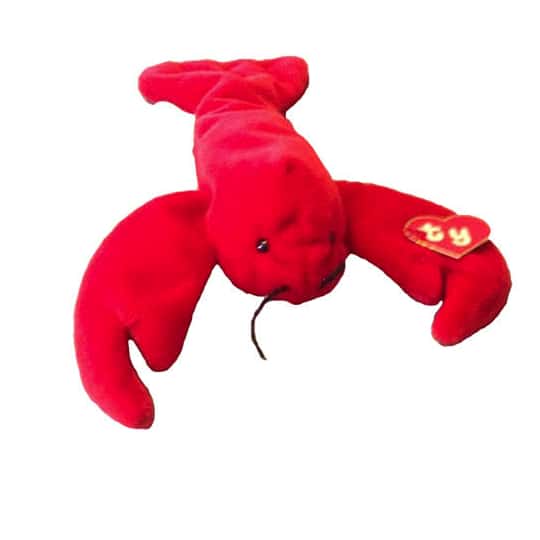 Punchers the Lobster was one of the first Beanie Babies ever released in early 1994, but was quickly retired because “Punchers” was actually a name error. No one knows how many Punchers Beanies were made before the corrected Pinchers were released. Since it is a very rare mistake, no Punchers are currently listed for sale, but Beanie Baby collectors say that the error makes the already valuable Pinchers worth even more. 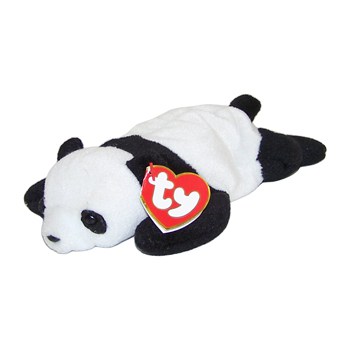 Although Peking was on the market for two years, it is considered one of the rarest and most sought after Beanie Babies by Beanie Baby collectors. However, our research did not turn up a solid reason for why Peking is so desirable. It might be because pandas are very popular animals, so Peking Beanies in good condition probably don’t come up for sale very often. Currently, there are a few Peking Beanies for sale on eBay, priced as high as $500.

The older versions of Peking feature a black piece of cloth around the button eyes to depict a panda’s markings. Later panda Beanie Babies have black fur around the eyes. 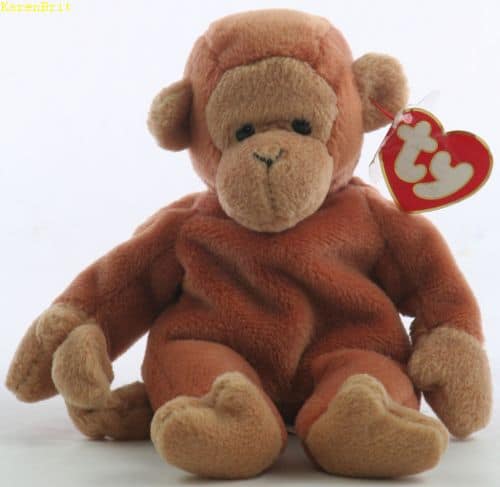 
Like a few of the other rare Beanie Babies on this list, Nana was only available for a short time. Nana was initially released in early 1995 and was retired before the end of the year. This early monkey Beanie Baby was re-released as Bongo, which was retired a few years later.

Two different versions of Bongo were released, one with a tan tail like the original Nana and the other with a brown tail that matched the fur color of Bongo’s body.

Reason for Rarity: Few were sold before mane was updated
Year Released: 1995
Birthday: September 16, 1995
Current Value (based on eBay listings or highest price paid at auction): N/A (none currently listed) 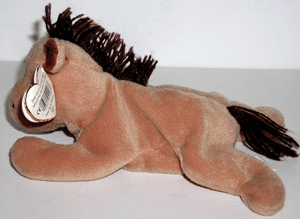 While there were four different versions of Derby the Horse released, the rarest one features no star/spot on its head and a fine mane. Derby Beanies with fine manes featured thinner and more strands of yarn on its mane and tail. This version of Derby wasn’t available for long and was replaced with a Derby with a coarse mane that used thicker strands of yarn, which most likely cut down on production costs as less yarn needed to be used. A white star was added to later versions of Derby and the coarse mane was eventually changed to a fluffy mane.

The tail of the fine mane version of Derby featured about 15 – 20 strands of yarn, while the coarse mane Derby tail only had eight strands.

Chef Robuchon is one of the rarest modern Beanie Babies out there. Reportedly only 200 or so Chef Robuchon bears were made and they were never available to any retailer or store. The Chef Robuchon Beanie was created to promote the opening of the L’Atelier de Joel Robuchon at the Four Seasons Hotel, New York in 2006. The special edition bears were given away to the guests invited to a private function that took place right before the restaurant’s grand opening.

Because the Chef Robuchon Beanies are so special, very few have ever gone up for sale. One was sold by BBToyStore.com for $6,499.99. 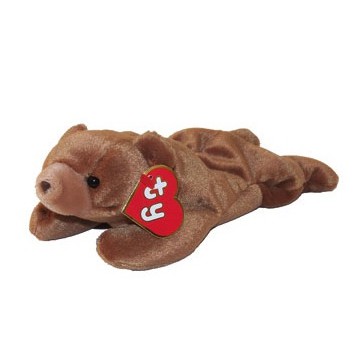 Brownie is most likely the rarest Beanie Baby Ever because it was retired very quickly. There is no publicly available data on how many Brownie Beanie Babies were produced or moved before it was retired forever a few months after it was released in 1993. The name Brownie was considered a mistake and the bear was later re-released under the name Cubbie.

Although Beanie Babies are not really in demand much anymore, Brownie still fetches a fairly high price. One authenticated mint condition Brownie originally from Korea was sold for $819.19 in November of this year.

Since Brownie was released with 1st generation swing and tush tags, he does not have a birthday or poem. However, the updated version of Brownie, Cubbie, has a birth date of November 14, 1993.

10 Rarest Pokémon in Sword and Shield