Half Dollars or 50-cent pieces are not widely circulated coins, but were heavily used in the past. In 2002, the U.S. Mint ceased production of half dollars for general circulation, but they are still minted in small quantities. Since half dollars are made of silver, many were melted down during various times in American history, leading to several rare varieties. All of the half dollars on this list have low remaining numbers and often sell for hundreds of thousands of dollars at auction. While all of these half dollars are currently held in private collections, many coin collectors believe there are still a number of rare half dollars waiting to be found! 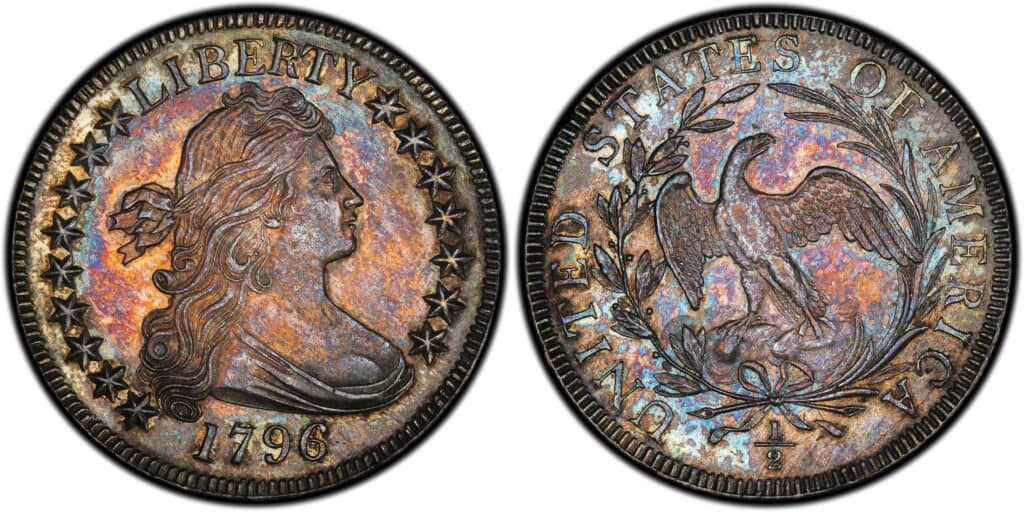 The 1796 Draped Bust Half Dollar with 16 Stars marked a turning point in American history as too many states to continue to symbolize each of them with an obverse star. 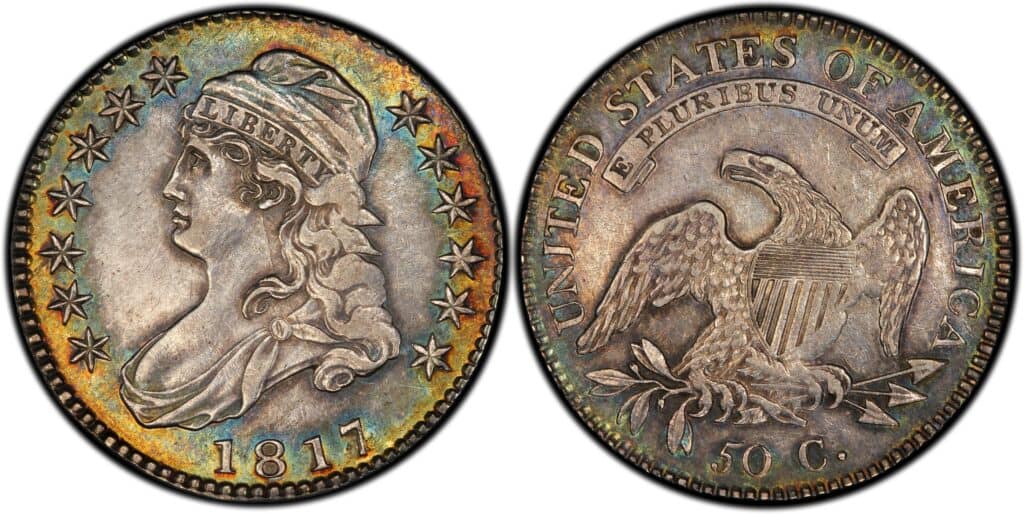 The 1817 Capped Bust Half Dollar with Overdate error is one of the most famous coins in the Capped Bust half dollar series. The coin features fairly noticeable evidence that an older die was reused, which was common practice at the time. Part of the date from an older die was shaved off and the seven was re-punched, but some parts of the four are still visible. There aren’t any records indicating how many of these Overdate half dollars were minted, but 11 have been discovered so far.

Coin collectors believe that there are more 1817 Capped Bust Half Dollars with the visible Overdate out there as four of these coins have been discovered since 2005, with the most recent one popping up in late 2013/early 2014. 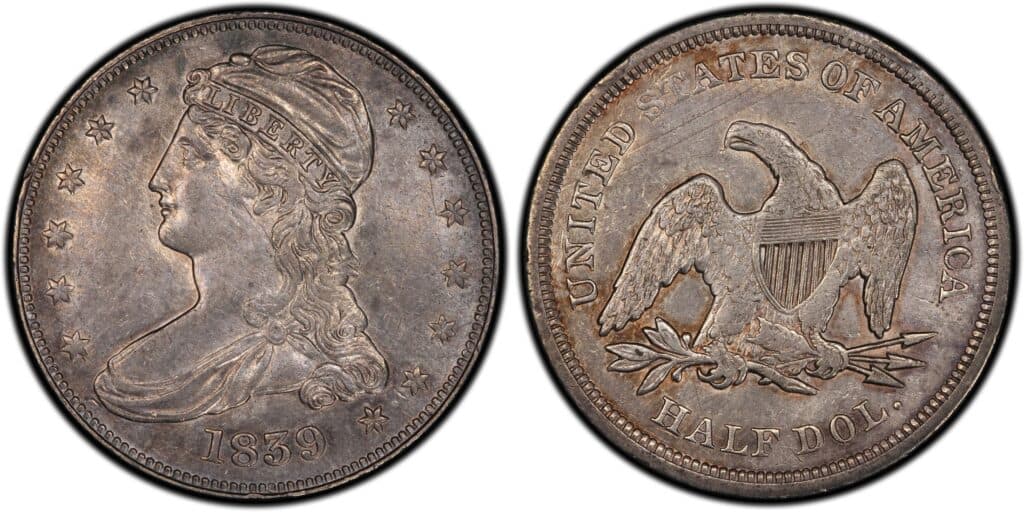 The 1839 Capped Bust Half Dollar with Small Letters on the Reverse is the rarest of all Reeded Edge Half Dollars, except for some select proof issues. As its name suggests, the words “UNITED STATES OF AMERICA” and “HALF DOL.” are smaller than the normal Capped Bust Half Dollars from the era. 1839 was the last year that the Capped Bust die was used before it was replaced with the Seated Liberty. There are no official records for how many of these coins were minted, but only about 10 have been discovered.

The rare 1839 Capped Bust Half Dollars with Small Letters on the Reverse were not discovered until 1972 by New York numismatist, Maurice Rosen. 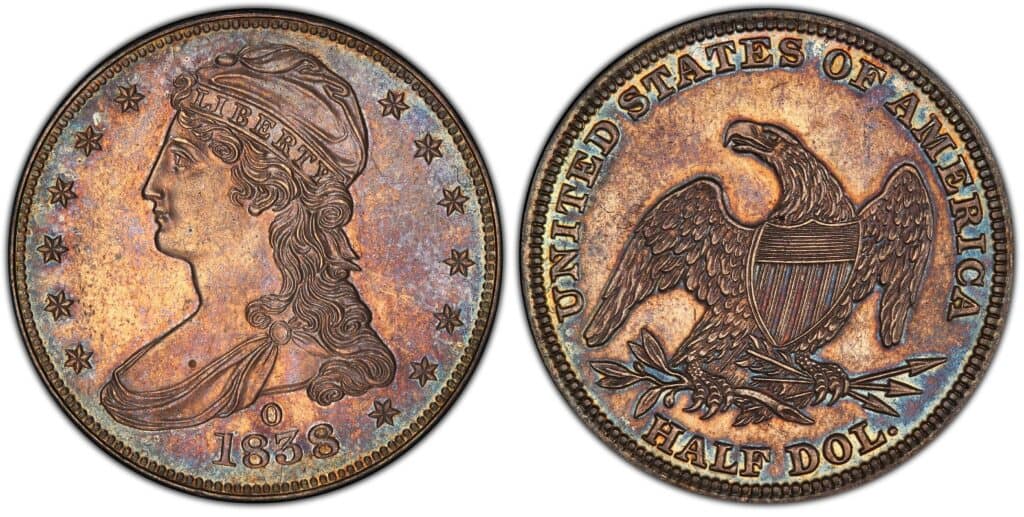 The 1838 O Capped Bust Half Dollar Proof is considered one of the rarest U.S. coins of any denomination. These coins were struck just after the New Orleans Mint opened and unfortunately there are no official records for how many Capped Bust Half Dollar Proofs were actually produced. It is believed that less than 20 were made and only six currently exist. The report did mention that two pairs of 1838-dated half dollar dies were mailed from the Philadelphia Mint in April and received in New Orleans by May 3, 1838. The lack of proper record keeping at the New Orleans Mint that year is attributed to the many problems the mint faced, including equipment breakdowns.

The 1838 O Capped Bust Half Dollar Proof is believed to be the earliest proof coin struck at any branch mint outside of the main U.S. Mint in Philadelphia. 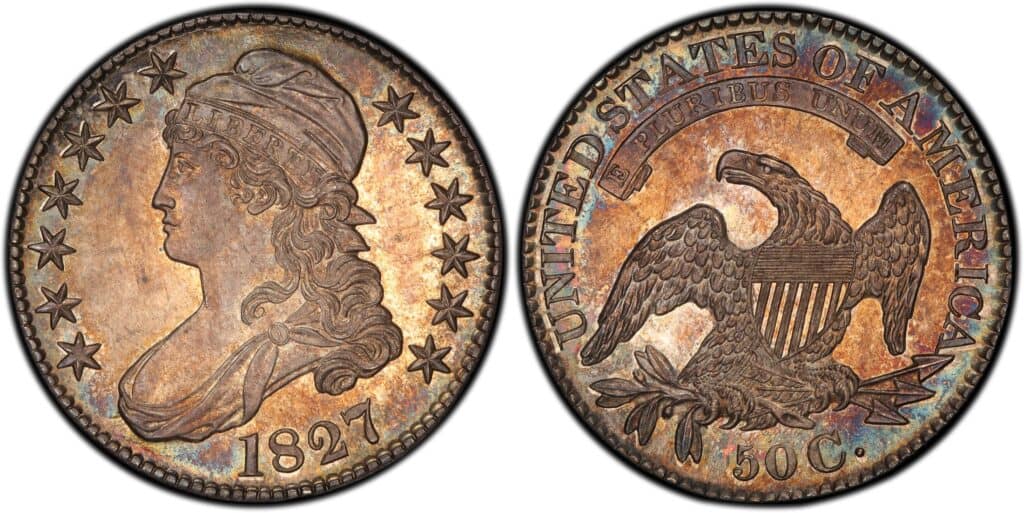 In the early 19th century, proof coins were only struck when they were requested by collectors. Of course, at this time not that many people were collecting American coins, so any of these proofs that survived from the era are rare and valuable. This is the case with the 1827 Capped Bust Half Dollar Proofs. Only eight such coins were minted and five are currently accounted for.

The finest example of an 1827 Capped Bust Half Dollar Proof was sold for $258,500 and it received the highest grade ever offered to a Proof Capped Bust half dollar of any date. 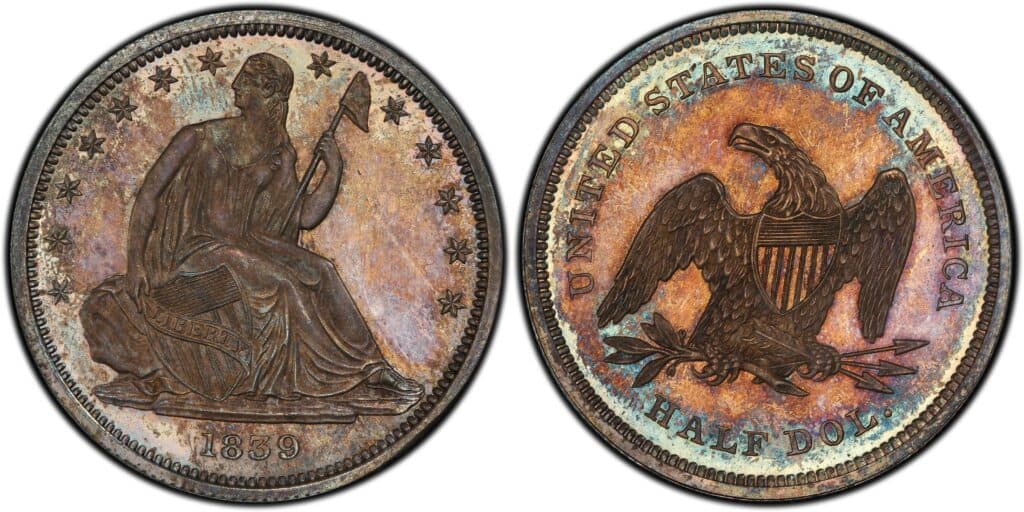 In general proof coins are rare, especially ones from the early 19th century. The 1839 Seated Liberty Proof with No Drapery is no exception to this rule and there are only three in existence. It is believed that five of these proof coins were struck and so far five have been identified. While the regular 1839 Seated Liberty Half Dollars have an extra piece of drapery over Lady Liberty’s left arm, these initial proofs lack that part of the coin’s design.

True 1839 Seated Liberty Proofs with No Drapery have a very fine crack through the base of HALF DOL. under the eagle.

The New Orleans Mint probably did not report the number of 1853 O Seated Liberty with No Arrows/No Rays half dollars minted because the Act of February 21, 1853 made those coins obsolete. 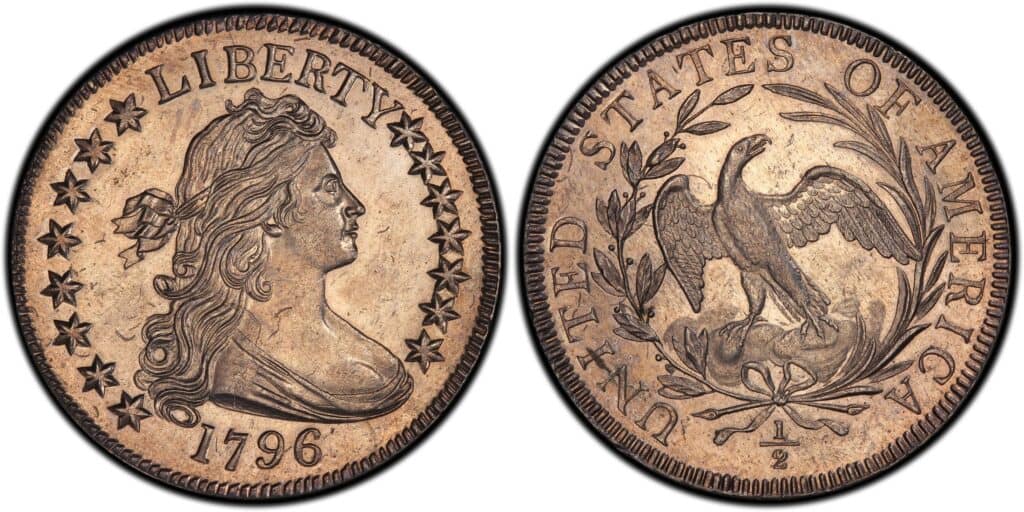 This 1796 Draped Bust Half Dollar with 15 Stars Specimen was specially struck and only one coin was made and still exists. The incredibly rare Specimen coin has been well loved and is still in mint condition after 224 years. The coin sold at auction for $587,500 and is the only example of the Draped Bust Half Dollar with 15 Stars to have ever been recognized by PCGS as a specially struck piece. It is believed the coin was specially struck for presentation or some other non-circulation function.

The 1796 Draped Bust Half Dollar with 15 Stars Specimen is so finely crafted that it even shows the lint marks from the cloth used to wipe down the dies right before it was struck. 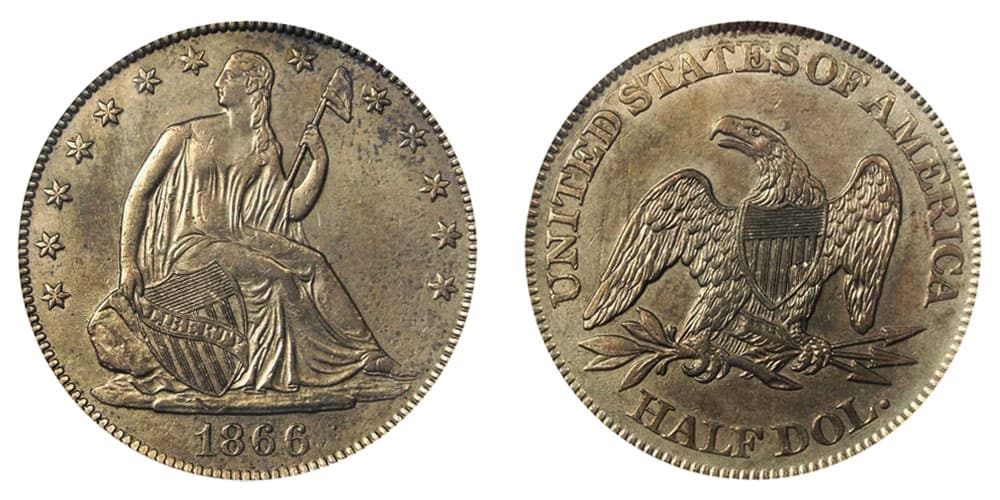 The 1866 Seated Liberty Proof with No Motto/Arrows is an incredibly rare and unique half dollar. Only one of these proof coins was ever minted and it was kept in good condition. This 1866 Seated Liberty Proof does not feature the motto “IN GOD WE TRUST” above the eagle. The motto was later added to all half dollars minted that year. The rare half dollar has only been put up for auction three times over the past 154 years and last sold for $1,164,086!

The 1866 Seated Liberty Proof with No Motto/Arrows is part of a collection containing two Seated Liberty Dollar Coins without the motto, which are also worth over $1 million apiece. 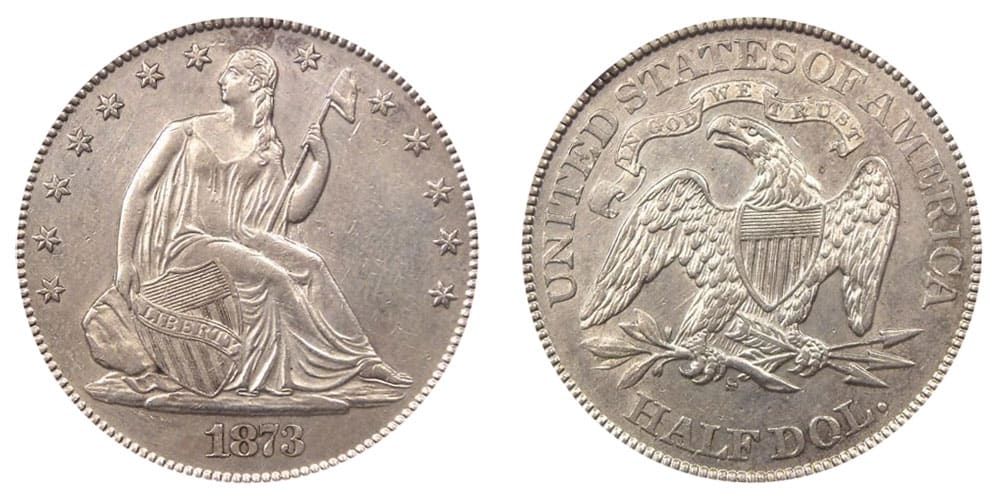