Squishable Squishmallow plush toys by Kellytoy have been flying off shelves since 2017. There are now over 1000 different Squishmallow creatures to collect and squeeze. They reflect hundreds of animals, sports, emotions, and even individual character names. They each have their own stories and adorable personalities.

With so many Squishmallow characters, some have been produced less frequently than others. There are exclusive editions and promotional plushies that drive exclusivity (and, therefore, the price). Collectors on sites such as Mercari and eBay are now paying hundreds or thousands of dollars for the rarest Squishmallows. These are the 8 rarest Squishmallows that money can buy. 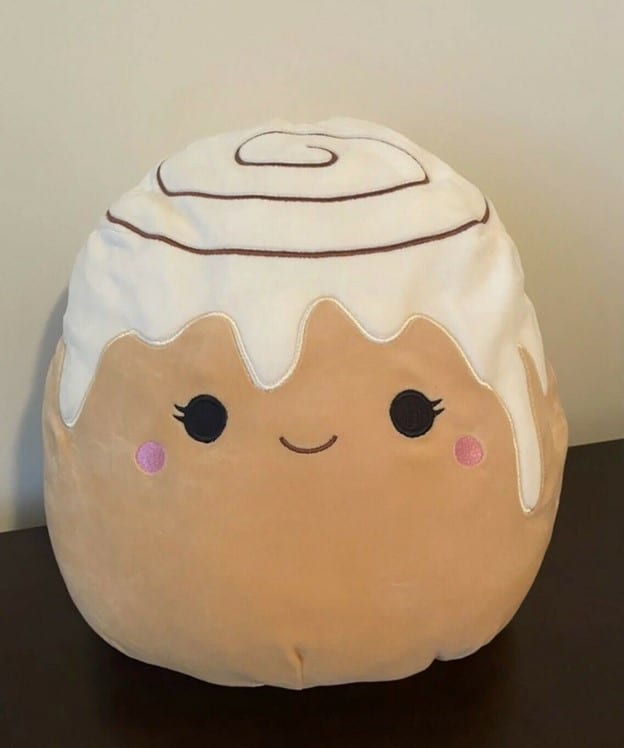 The Cinnamon Roll Squishmallow is named Chanel for the designer perfume. As you might expect, she’s a Frenchie and a fancy pastry who loves cooking and being sweet. According to her character information, she volunteers at local food pantries and teaches other Squishmallows how to bake and decorate.

Her body is a solid tan-colored pastry with black eyes and a pink mouth. Her “hair” is cream-colored icing with a brown cinnamon swirl on top. She’s part of the Valentine Squad, which makes her pretty rare since they often only release these lovable squishable Squishmallows once. She was the Valentine’s special in 2020 and often costs as much as $450 when the bidding gets intense.

Chanel is actually a reasonably common Squishmallow in her default form, which has a heart-shaped cinnamon swirl, no cheeks, and no eyelashes. However, the plain cinnamon swirl with rosy cheeks and eyelashes, as well as a bigger and more complex icing pattern, is the Chanel listed here, which is a rare version exclusive to Canada. Finding this particular pastry will require a lot more digging. 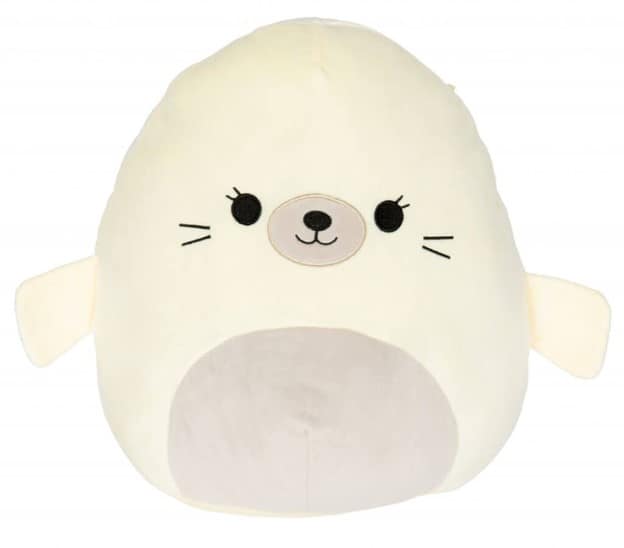 Lucille is a seal Squishmallow and a member of the Sealife Squad. This was a plush series that includes 23 characters to date, including Lucille. According to her biography, Lucille loves the water, diving for gems and rocks, and showing off her geology collection.

This plush is white in color with black eyes, nose, mouth, and whiskers. She has little flippers and a grey muzzle with a pale grey belly. At auction, Lucille the seal often fetches around $500.

Lucille is one of only 4 seal Squishmallows and the rarest of the bunch by far. These include Noah, Isis, and Lilou in addition to Lucille. 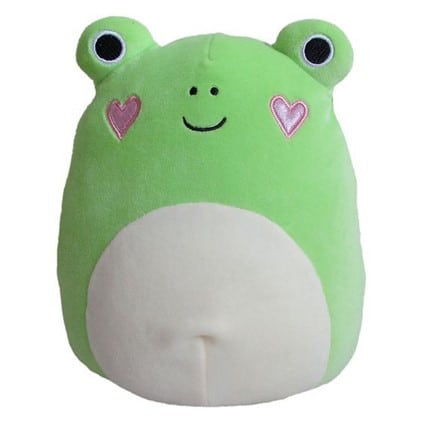 Phillipe the frog is one member of the gigantic Valentine squad, full of loveable love messengers, many of which were Valentine’s Day exclusives. Phillipe is very reminiscent in appearance to Wendy the frog but differentiated by his heart-shaped pink cheek patches.

According to his biography, Phillipe loves to hang out with friends and play hopscotch, especially on Valentine’s Day. He was a promotional Squishmallow for the holiday, which has given him a rare reputation since he debuted in 2017. In online auctions, he can fetch around $530 if the bidding is competitive.

According to Squishmallow lore, Phillipe is best friends with Marco, a Valentine’s exclusive Squishmallow from 2019 who’s a pink and white Hedgehog with hearts on his chest. Sometimes, Valentine’s bundles of Squishmallows appear in auctions as collections, grouping these connected plushies together and increasing their value by association. 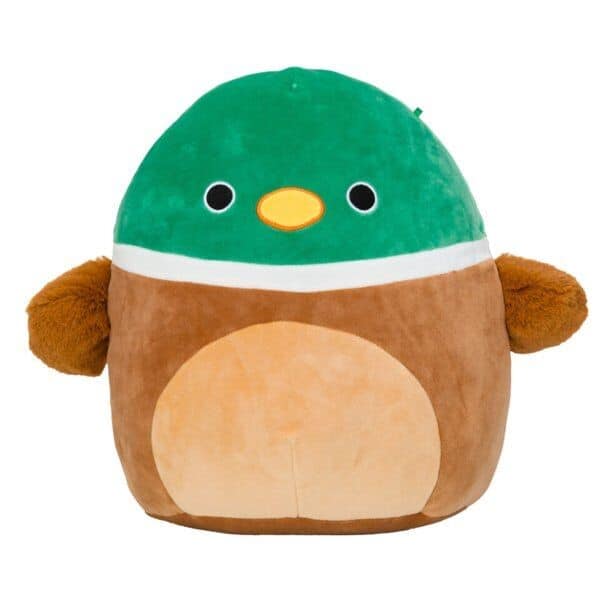 Avery is a duck Squishmallow that has a classic kiddie color palette with a bright green mallard head, yellow beak, black eyes, brown body, and tan tummy. He’s a member of both the Adventure and Farm squads. Adventure Squad is full of dinosaurs and dozens of crazy critters. Farm Squad is only six farm animals large, including Avery.

According to his biography, Avery is a member of the Squishmallow rugby team (he plays left wingman). He dreams of being the coach and loves when his family brings him a victory popsicle after the game. At auctions, Avery sells for more than $500.

Most Squishmallows come in one size, two tops. Avery is unique in that he was released in six different sizes. 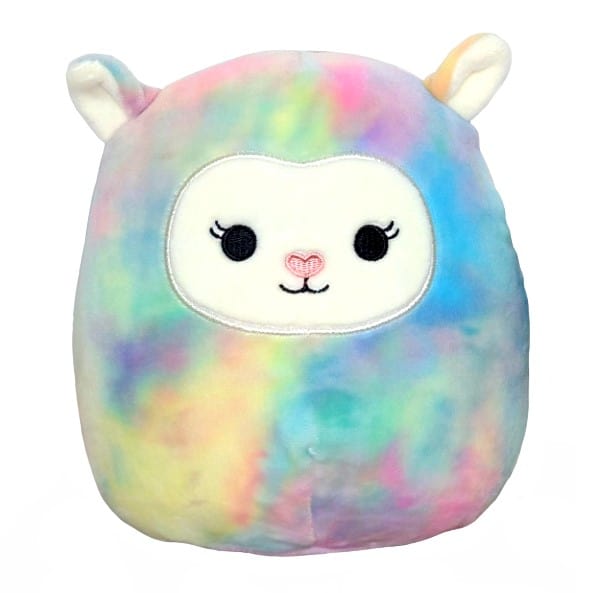 Mariah is one of the many lamb Squishmallows, a member of the Squishmallow Baby Squad along with 6 other plushies. Mariah is rainbow-colored except for her white and cream-colored face and ears. Her eyes and mouth are black while her nose is a soft pink heart. According to her biography, she’s a huge fan of horseback riding and horchata. She is described as loyal and pleasant.

Mariah is a rare exclusive that frequently sells at auction for upwards of $800. 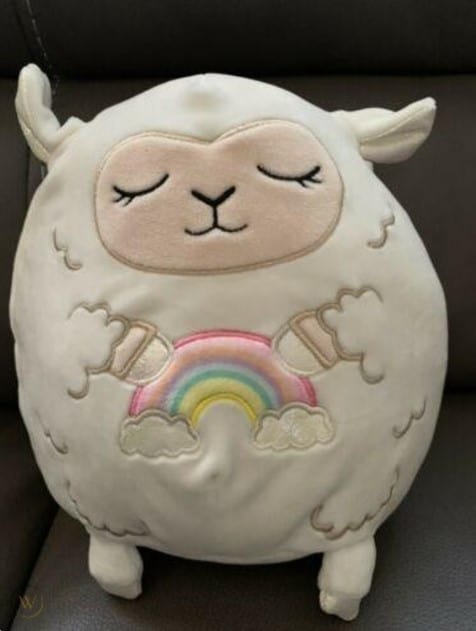 Blossom is a sheep Squishmallow who is white all over except for her cream-colored face and gold fluffs. Her eyes are closed serenely as she clutches her hooves around a tiny rainbow with woolen clouds. This EUC Justice exclusive plush debuted for a limited time in 2018.

Blossom the sheep’s plushie body is lightly scented with vanilla. She’s around 8.5” in height, though she does have a 16” version as well. At auction, Blossom can fetch more than $800, conservatively. That number may only continue to go up due to certain recent company changes, which we discuss below.

Blossom the sheep was made through a limited partnership between Kellytoy and Justice. Since Justice folded in 2021, Blossom will never be manufactured again, ensuring that this already limited Squishmallow will only continue to be more coveted. 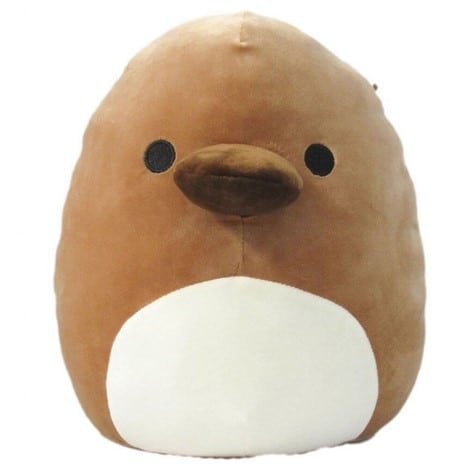 Santino the Platypus is one of the rarest and most expensive Squishmallows. He’s 12” tall and light brown all over except for his dark brown bill, black eyes, and white belly. According to his character biography, Santino makes stellar blueberry pancakes, which his dad taught him how to cook. He also loves soccer and aspires to become a professional goalie.

Santino the Platypus is one of the rarest Squishmallows out there and frequently sells for $1,100-$1,500 on auction sites.

Brown is one of the least common Squishmallow colors, which tend more often to be brighter, more vibrant styles. Of the 1,000 Squishmallows in existence, fewer than 50 are brown. 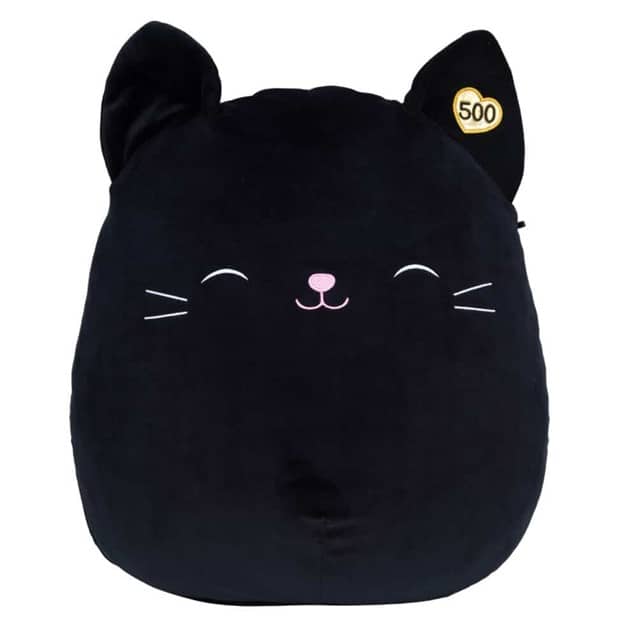 His biography describes him being strong and silent, as well as feisty and helpful. On auction sites like eBay, Jack the Black Cat sells for upwards of $2,000.

Overall, Jack the Black Cat is the 500th Squishmallow. To commemorate this, he has an exclusive tag on his ear with a gold 500 on it. This is also embroidered on his left ear and on his label. Only 500 Jack the Black Cat plushies were ever manufactured.

Kellytoy’s hit Squishmallows have been manufactured by the thousands in over a thousand different characters. Their exclusive and limited edition plushies have become collector’s items that fetch a high premium, some in the hundreds and even thousands of dollars on the high end.

Their holiday event toys, company partnership exclusives, and other rarities are now incredibly coveted. If you’re looking for these ultra-rare plushie animals to complete a series or start a new collection with a gem, you’ll have to be willing to shell out a lot of money. Alternatively, become a fly on the wall of every Squishmallow auction on eBay to find a decent deal on these ultra-valuable squishy toys.