Axolotls are real animals, a breed of tiger salamander recognized by their soft pink bodies and external, feathery gills. In Minecraft, axolotls are creatures that are semi-aquatic, adorable, and variable in color. There’s some variation in rarity between the colors of axolotl, as well as their desirability. But all of them are cute and feisty.

Finding, catching, breeding, and keeping axolotls is just one of the many pastimes that players invent for themselves in the world of Minecraft. To complete their collection, players seek out the five colors of axolotl to try and own them all in a little rainbow river farm.

Even though many of the axolotls have a common spawn rate, catching all of them and keeping them alive is no easy matter. Keep reading for a user’s guide to collecting the rarest axolotls in Minecraft.

The 1.17 update in Minecraft introduced the biome Caves & Cliffs, which is another place that axolotls can spawn in addition to the Ocean biome. While axolotls can’t be tamed by the player, they can be caught in a bucket and carried to new homes to create a little makeshift collection. If you don’t have a bucket, you can technically lead your axolotl to their new home over land. However, keep in mind that axolotls die when they’re not in the water for 5 minutes. So if it’s not raining and home is far away, you’re going to need your trusty bucket to keep your new friend alive.

Axolotls can also be bred if you have tropical fish buckets and two adult axolotls. You just need to get the two axolotls you want to breed and sit them next to each other. Once fed with some fish, they will emote in little red hearts that signal their “love mode,” during which they will produce a baby axolotl of the parent’s color, chosen at random.

In 20 minutes of in-game life, the little axolotl will reach adulthood, though this process can be sped up with more tropical fish. If only real life was this easy!

Note that this can help you create a little axolotl farm but poses very little chance of helping you find all the axolotl colors, since you can only mix and match what you already have. Rather, you’re going to have to rely on nature’s spawn rate to find the rarest axolotl colors.

Here’s everything you need to know about each one. 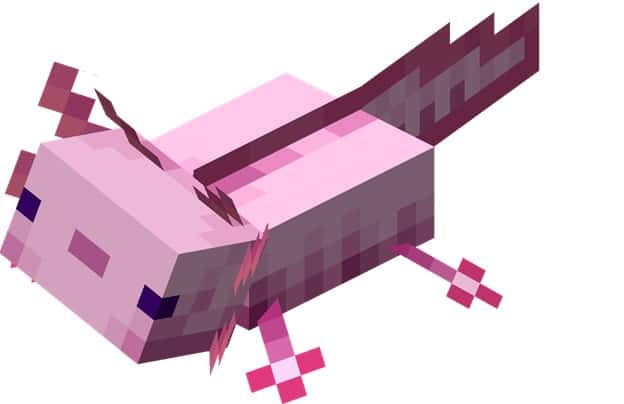 Lucy axolotls are among the most common in the game and probably the first thing that players think of when they think of axolotls. Lucy is short for “leucistic,” which is a real condition that animals can be afflicted with. Leucistic animals produce less pigmentation in their skin, scales, or feathers than normal members of their species. The reduced color stems from a mutation in their genes that prevents melanin, which gives skin its color, from being distributed by their bodies into their skin and hair.

This is portrayed in a Minecraft axolotl as a light pink coloring with details of darker pink markings. These axolotls have a spawn rate of $24.98%.

A previous version of the leucistic axolotl was pink with a yellow hue but it was removed from the game. This old variation was replaced with the modern, common lucy variant. 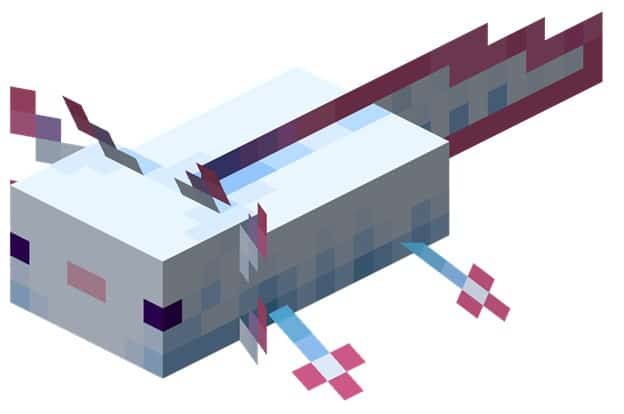 Cyan axolotls are light blue in color, not to be confused with the darker blue variants discussed below. Their bodies appear almost white with blue details and pink highlights on the toes and fin. They have a spawn rate of 24.98%, making them technically as common as the Lucy axolotls but not as immediately recognized by players, for one reason or another.

Like any axolotl, the cyan ones can be lured, fought, and bred.

Axolotls eat tropical fish, which are plentiful in the ocean biome but difficult to catch. Those who want to farm for axolotls and try to collect all the colors will need a steady supply of tropical fish kept in a bucket to lure in your adorable prey. Single tropical fish won’t work – you’ll need a bucket full of them to entice your new pet.

Unfortunately, tropical fish scare very easily, making them difficult to capture in buckets. This means that nabbing every axolotl color will require a lot of patience, not only in catching the axolotls but the fish as well. If you can’t handle the time commitment of catching all those fish, try to find the Wandering Trader. He sometimes sells convenient buckets of tropical fish for your axolotl-catching needs. 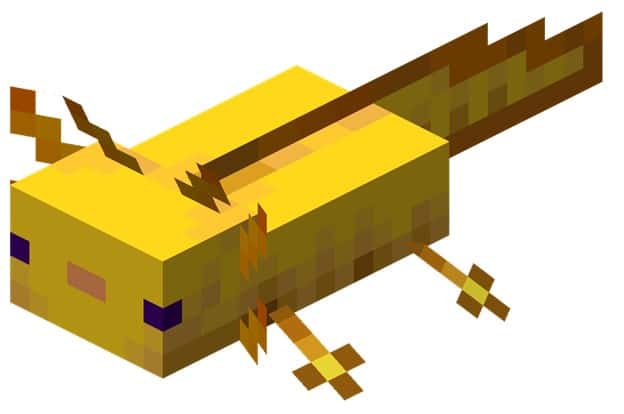 Gold axolotls are instantly recognizable by their yellow bodies and gold-tipped toes and fins. Like other common axolotls, they have a common spawn rate of 24.98%. While they may seem rarer due to their vibrant gold coloring, they are equally rare additions to any complete axolotl collection.

Axolotls are both adorable and peaceful. They won’t attack players like common enemies. However, this doesn’t mean that axolotls are helpless. They are easily aggroed by other creatures in the ocean biome (except for turtles and dolphins, uniquely, which seem to be friends with axolotls). Players have even observed axolotls taking on a Drowned by themselves or teaming up on them in groups.

Minecraft was kind enough to give these adorable critters defense mechanisms so they could handle their combat ambitions. When they’re in their element underwater, axolotls that take damage activate a play-dead instinct. They become motionless and fall off their enemy’s radar as they gain a Regeneration perk to get some of their health back.

This regen status effect can even be temporarily transferred to the player if they step in and engage an enemy mob after an axolotl has aggroed them. 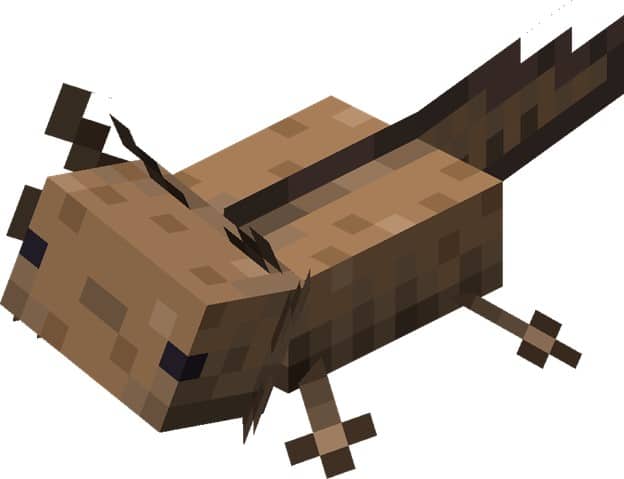 Wild axolotls are a bit of a misnomer since all of them are wild, technically. However, “wild” describes their animalistic coloring, which is light brown in the body with details of darker brown. This makes them difficult to see sometimes against similarly colored blocks. As a result, despite the fact that Wild axolotls have the same respawn rate as other colors, they are more difficult to see. This makes them “rarer” in practice even though they are technically just as common.

Wild axolotls have an old version that is no longer included in the game. These were colored a dark orange with brown highlights. Since they can no longer be caught, they cannot factor into a list of the rarest axolotls. However, the old-style orange Wild Axolotls, which we might consider an extinct Minecraft species, are worth at least a little mention. Consider this a mini memorial. 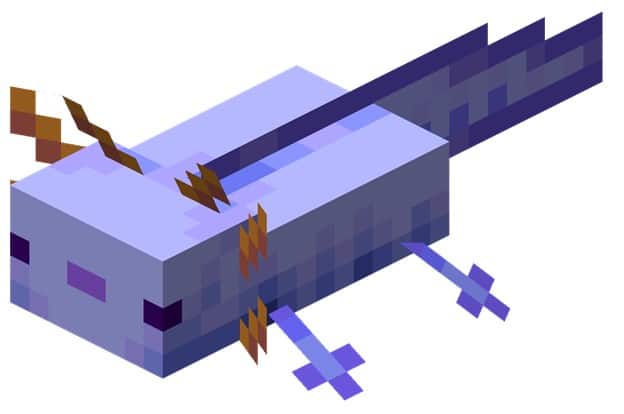 The rarest axolotls are the blue axolotls. Blue axolotls are extremely difficult to find. They have a spawn rate of only 0.083%, recognized by their indigo or deep blue bodies with purple details on the belly and fins. These rare axolotls are the jewels in any collection and players should consider themselves exceedingly lucky if they can spawn, locate, and capture a blue axolotl.

If anyone was figuring on breeding axolotls to obtain a blue one, this may not be as much of a time-saver as they initially thought. It can be easy to breed the other colors, but the blue axolotls have the same chance of being born as they do of being spawned – 0.083%.

Green axolotls are something of a Minecraft legend. When these adorable creatures were announced, the original axolotl artwork sent to players was a bright green one with lime-colored skin and forest-green highlights on the fins and gills. However, green axolotls were never added to the game, for some reason. They may have been a concept design for what became the rare blue axolotl.

Some players believe that they could still be added in a later update and finally nab themselves a green axolotl.

Axolotls are some of Minecraft’s most coveted critters. They can spawn in the ocean and newer cave biomes, as well as in any water source that is both completely dark and lower than sea level (in Minecraft latitude, that’s lower than y63).

While axolotls cannot be tamed by players, they can be caught, carried, and re-homed in ponds or manmade lakes. To complete your collection of axolotls will require hunting down or breeding the 5 existing axolotl colors, including the coveted rare blue one. In the future, we may see updates bring new axolotls to life in the world of Minecraft. For now, these 5 little guys represent their entire adorable species.