The rarest soccer cleats commemorate what many people in the United States and Canada fail to realize is the most popular sport in the entire world. Soccer or “football” abroad is viewed and followed by over 4 billion fans. The cleats, the weapons of choice for the soccer champion, can be casual, unimportant tools of the trade or extravagantly expensive trophies.

This is a list of the latter, the rarest and most expensive soccer cleats in the world. Often, these exclusive shoes were commissioned in limited editions in honor of a player winning awards or breaking records, or a country’s team winning a World Cup. However these shoes came into the world, their current destination is onto the shelf (or the feet) of some avid collector who was willing to pay thousands for them.

In ascending order, here are the 8 rarest soccer cleats (or football cleats) in the world. 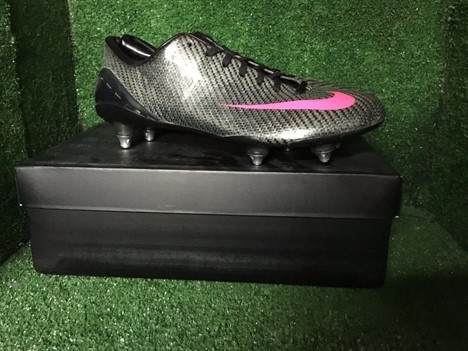 These popular Vapor models are the Nike Mercurial Vapor IV, made with a shiny black sheen (it’s actually a finish of faux carbon fiber) and a bold Nike logo in solid neon red. These limited-edition boots are sought-after collector’s items and can go at auction for up to $2,750.

The shoes are sponsored by Cristiano Ronaldo, one of the highest-paid footballers in the world and something of a through-line for most of the cleats on this list. He’s been wearing Nike Mercurial shoes for about a decade and his sponsorship with them, coupled with his award wins, has made that line of cleats the most exclusive and expensive in the world. Most of the entries on this list will be Ronaldo trophy shoes.

The Nike Mercurial Vapor line, which we are far from finished with on this list, is known for being an incredibly lightweight boot. This makes them favored cleats for many famous players, particularly those who need every split second of speed to make instant course corrections and have ultimate responsiveness on the field.

For 19 years now, the Nike Mercurial Vapor shoes have been improving the speed game of a lot of famous players, most notably strikers and wingers, for whom speed is always the game plan. These include not only Ronaldo but also Mbappé, Sterling, Drogba, Costa, Hazard, Vidal, Shaarawy, Coutinho, and others. 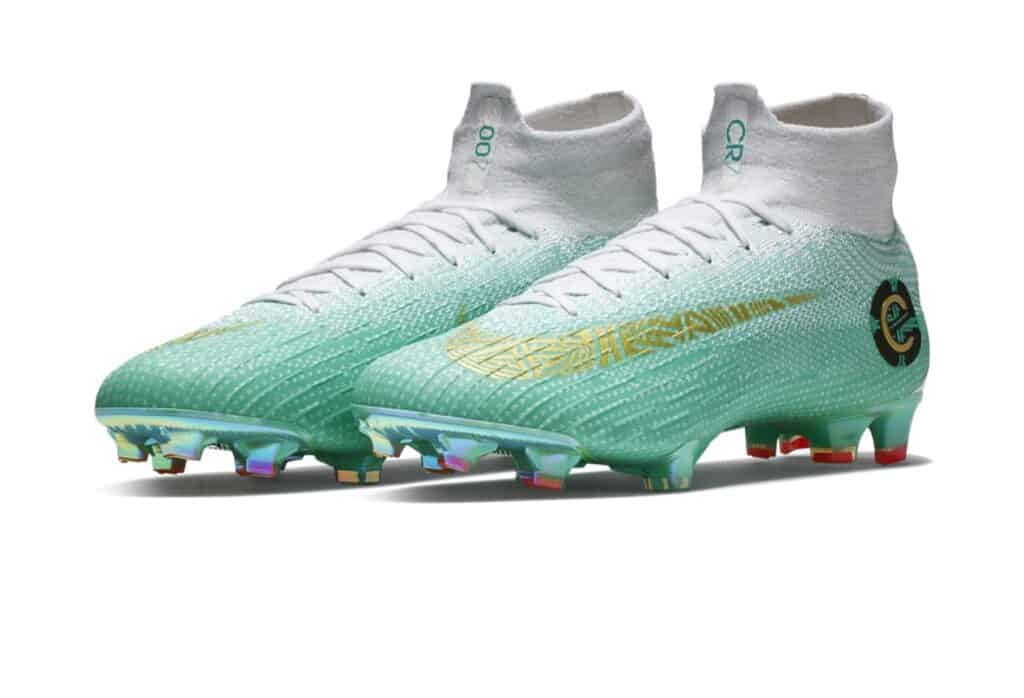 The logo that emblazons the side of the Nike Mercurial Superfly 6 cleats is a combination of the flag of Portugal and the official career logo of Cristiano Ronaldo.

As we mentioned, Ronaldo has worn and been sponsored by Nike Mercurial shoes for about a decade, so these limited-edition cleats have his signature all over them. The body is colored in gradients of teal while the lip and laces are white.

The Nike Mercurial cleats are responsible for innovations in cleat plating that improve player responsiveness on the field (though not quite as much as the Vapor). They’re known for enabling players to make quicker cuts at higher speeds. This may be why Ronaldo has sponsored them all these years.

Adidas is just about the only competition Nike has in the world of super rare cleat designs. Their Messi 16+ cleats, specifically the limited edition Pureagility ones, are some of the rarest ones out there. Only 100 pairs of these boots were ever produced. If you can find the ones with the bright pastel green toes, you may have $3,000 shoes on your hand.

All these cleats were signed right off the factory floor by Lionel Messi. Signed or otherwise altered editions of these shoes probably shouldn’t count on lists of the rarest editions. However, since Messi signed all of them, this entire line of cleats is technically a signed edition, so we consider it a pass in this case.

Lionel Messi is a footballer for Argentina, a famous forward and national team captain. He’s won six Ballon d’Or awards, a French football trophy awarded to the world’s best players (we’ll be talking about that more later). No one has ever won that many, by the way.

It’s only natural that he’d have exclusive Adidas shoes made in his honor. When you wear these shoes, you’re wearing shoes signed by the player many consider the best living footballer and one of the greatest who has ever lived. 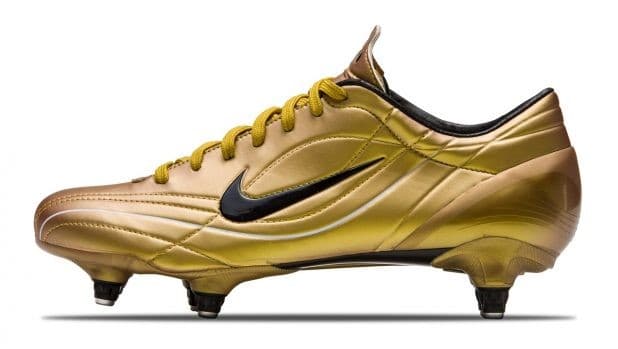 This is not the first or the last time you’ll hear about Nike Mercurial Vapor cleats on this list – they basically own the market when it comes to rare, commemorative cleats. The second edition of these cleats, known as the Gold SL Ronaldo Edition, are all-gold shoes with the inside, cleats, and Nike logo emblazoned in black.

At auction, the Nike Mercurial Vapor IIs can fetch up to $3,199.

Cristiano Ronaldo, the famous soccer player for Portugal, has been sponsoring and wearing the Nike Mercurial Vapor shoes since 2012. These rare editions named after him contribute to his fame, his status as one of the highest-paid football players on earth, and the ludicrous rarity of these collector’s cleats. 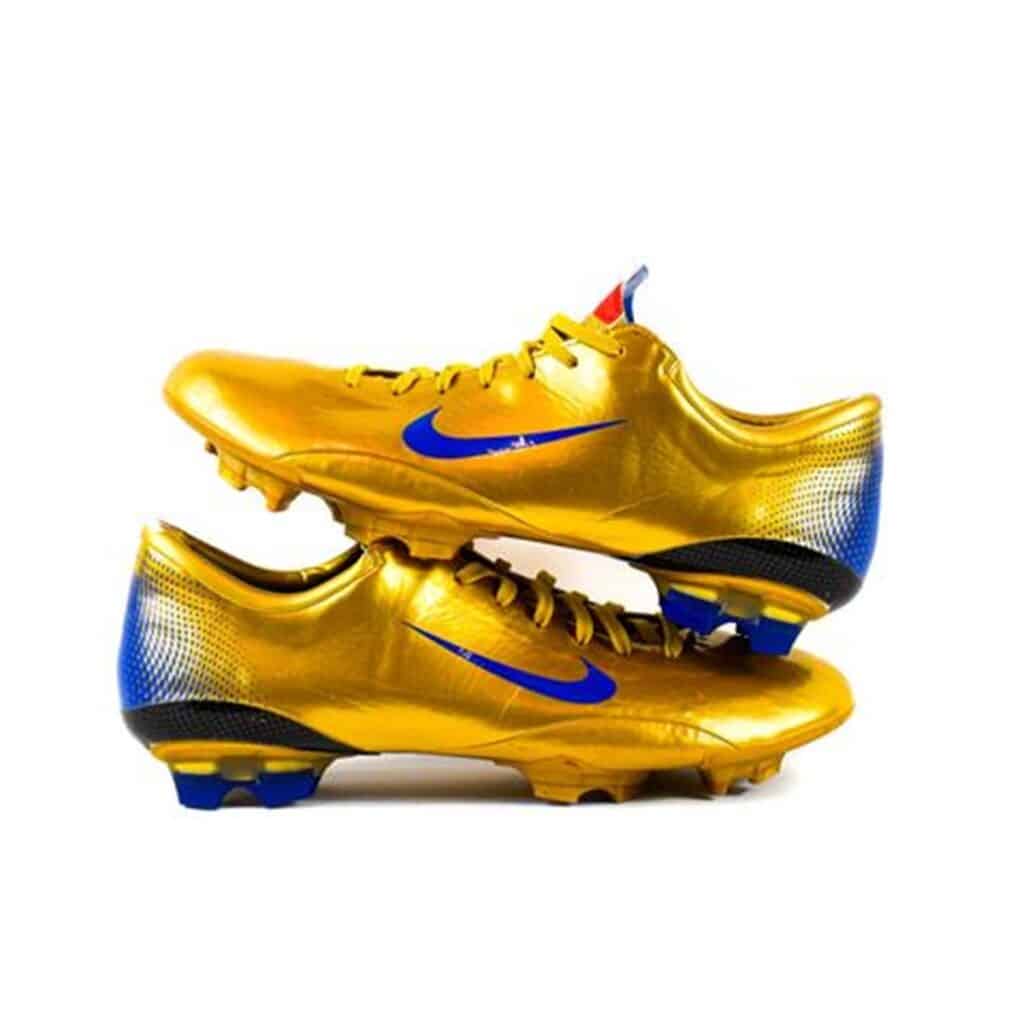 Sometimes, limited-edition cleats are not released in honor of an award or a player but an event. This is the case with the Nike Mercurial Vapor III cleats, which were released in a limited edition in honor of Italy’s win at the 2006 World Cup. This was the fourth World Cup Italy had won its entire history up to that point.

With the limited-edition shoebox, these cleats set back their lucky auction winner $3,499.

The box for these cleats details the entire tournament bracket of World Cup 2006, showing Italy’s journey from entrant to the final victor. 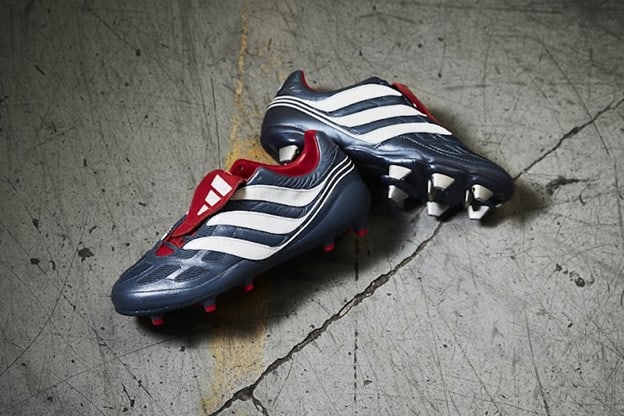 Adidas’ Predator Precision cleat line is an extremely exclusive, performance-focused design that as a result has become incredibly coveted in the professional playing (and collecting) worlds. Most of the people who have ever owned Adidas Predators have taken full advantage of them, playing in them until they fall apart.

To find unused Adidas Predator Precision 2000 cleats will set you back around $4,799.

Predator Precision cleats are famous for their studs, 8 screwed-in blades that are practically lethal compared to other models. When Precision first hit the market, the blades were so sharp that they snagged the turf. Later models dulled it down a bit. 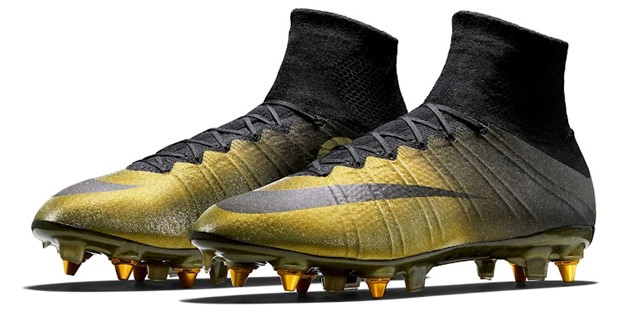 The Mercurial Superfly by Nike is as mysteriously unattainable as the name suggests. The cleats themselves sparkle gold and black in the sun. When the famous soccer player Cristiano Ronaldo won his second Ballon d’Or award playing for Portugal, the Superfly cleat was commissioned.

Only 333 pairs of these cleats were ever produced. At auction, they have brought in prices as high as $5,999.

Cristiano Ronaldo has made over 1,100 pro soccer appearances in his career, one of the most ever recorded. He has scored over 780 senior career goals playing for Portugal. Winning multiple Ballon d’Ors and having gold-plated cleats commissioned in your honor just comes with the territory.

The rarest soccer cleat is the Nike Mercurial Vapor IX. This cleat was issued in a limited edition, called the Ballon d’Or Edition, to celebrate Cristiano Ronaldo’s second award. The shoe’s cleats have a sheen of gold chrome that forms a plate along the entire sole.

Only 100 of the Nike Mercurial Vapor IX CR7 Ballon d’Or Edition cleats (say that five times fast) were ever released. At auction, this coveted shoe has sold for as much as $7,999.

The Ballon d’Or is a French football award that has been going on for 65 years now. Created by the famous French sportswriter, Gabriel Hanot, the Ballon d’Or yearly awards the best male football player. The limited-edition cleats that sometimes result from the award commemorations are often nearly as coveted.

The rarest soccer cleats in the world, at the moment a small oligopoly mastered by Nike with a little input from Adidas, are most often commemorative pieces honoring famous players. While this is usually Cristiano Ronaldo as far as this list is concerned, World Cups and famous figures have had commemorative cleats made in their honor and some have fetched thousands of dollars.

While that may seem like a high price to pay for a pair of cleats, for one of the 4 billion avid soccer/football fans in the world, no price is too high to commemorate their sport of choice.

8 Rarest and Most Expensive Pepes