Skateboarding seems like it would be as old as the Roman Empire or something, some ancient derivative sport using planks and stone wheels. But skateboarding is less than 80 years old! It sprung up in the 50s as “sidewalk surfing” and didn’t garner any real professional attention until the 60s. It wasn’t until 2021 that it even had an Olympic event!

This means that the rarest skateboards probably aren’t determined by age but by fame. These boards are signed by famous shredders, used in special events, or have otherwise acquired one-of-a-kind status in the world of skating. These expensive boards are more than collector’s items. They are part of new history.

This board, styled after the popular punk band, Black Flag, was sold for $7,000, kicking off our list with a modest entry (but still an expensive skateboard!). The artist Raymond Pettibon designed the board, called “No Net Ever,” which should come as no surprise since Pettibon is the brother of Black Flag’s guitarist, Greg Ginn.

The Rip City issue of this board from 1984 is considered the rarest, which is why it pulled in so much money.

Raymond Pettibon (pictured here) was a famous artist throughout the 80s, using his family connections and his talent to become a mainstay on the art side of the California punk rock scene. He created a ton of album art and posters for SST records, owned by his brother. He later transitioned to fine art circles, but not before designing this board. 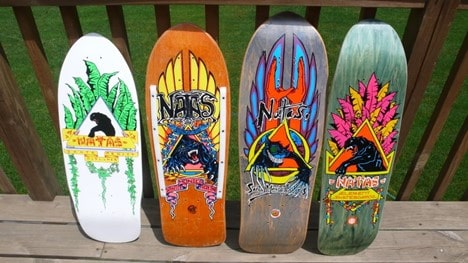 The skater Natas Kaupas created graphics for these rare collectible boards, based on a Frank Frazetta painting, who was in the zeitgeist in 1988 when the board was made. The Santa Monica Airlines skateboard was sold for $7,250 on Art of Skateboarding (AOS) when one showed up in mint condition.

Kaupas, in addition to being an award-winning surfer, is now known as one of the first generation of professional street skateboarders, as we define them today.

The fantasy artist Frank Frazetta loved his muscley men, busty women, and huge panthers. Basically, a lot of his paintings included huge black panthers. The one that served as the basis for Kaupas’ graphic on the Santa Monica Airlines board is an oil painting simply titled, “Black Panther.” It features a jungle man, inspired by Tarzan and Conan, as well as a black panther climbing over a tree. 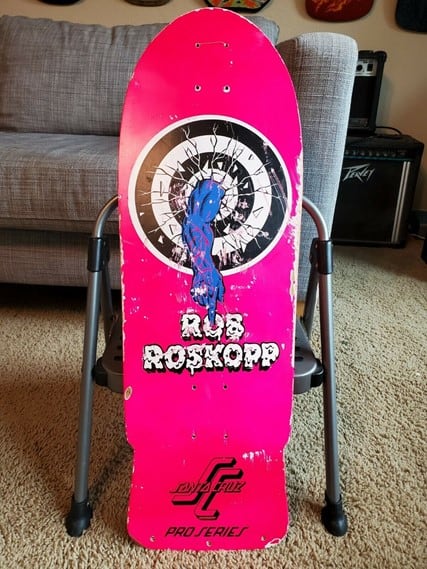 This N.O.S. vintage original skateboard from 1984 sold recently for $14,800, plus shipping. It’s a Rob Roskopp 1 Skateboard with the same full grip that it’s had since the 80s. The deck is lined with plastic gear but the N.O.S. or like-new old deck of this board drove up its price at the auction. The original nose guard was a little janky, but it didn’t seem to impact the price.

Rob Roskopp, skating legend, is perhaps just as famous now as the CEO of Santa Cruz bicycles as in modern skating circles. Since 1994, his company has been producing quality sports bicycles for enthusiasts, utilizing the Virtual Pivot Point technology or VPP for its full-suspension bikes. 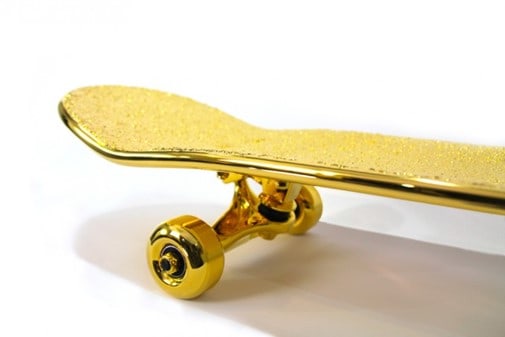 The Golden Skateboard is an obscene collector’s item: an electro-plated gold board covered in 99.9999% gold plating. Despite the fact that you should probably keep your $15,000 skateboard in a fancy jewel case, the board is perfectly ridable. To our knowledge, no one has taken their investment for a spin, but they could!

The board has a mirrored finish and has been treated as a collector’s item, handled only with an archivist’s cotton gloves to prevent it from even being smudged.

The Golden Skateboard sits right on the high end of the average width and length of a skateboard at 31.5” long and 8” wide. One thing that might feel a little strange at first though is that the golden board weighs 9 pounds, while the average board weighs closer to 11. 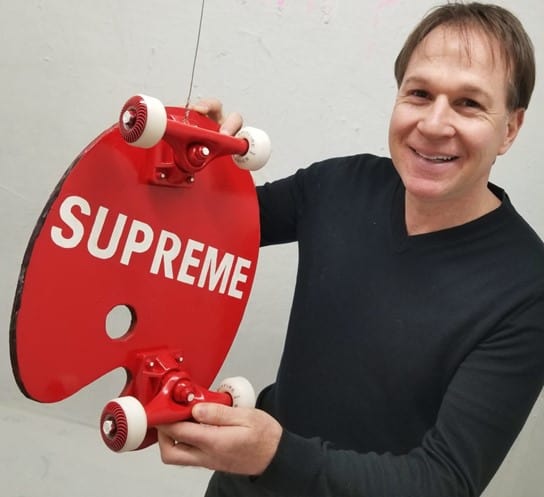 The Supreme Mundi, as the artist named Adrian Wilson named it, isn’t even really a skateboard in the traditional sense, though he intended it to be the most expensive deck in the world. He leveraged his artistic credibility to sell a one-of-a-kind piece of art on eBay by calling it a “skateboard.”

What is it really? It’s a Supreme logo slapped onto a red artist’s palete with wheels screwed on. More importantly was how it was billed, which was as a spiritual successor to Wilson’s $450 million sale of “Salvator Mundi,” the Da Vinci painting, in New York. He asked buyers to imagine that the board is made from the palette of Modestini, the conservationist who restored the famous Da Vinci.

The Supreme Mundi is also a reference to “the drop,” which was a common practice for skaters who were into streetwear merch. When a new product “dropped,” skaters would line up for hours to be the first to wear the brand. Brands like Supreme, shown here, were big droppers. 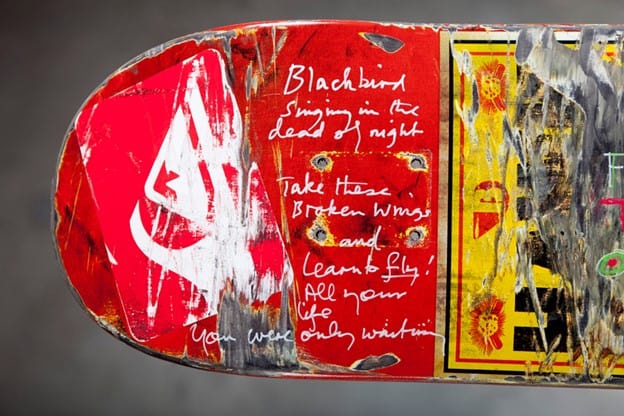 Tony Hawk needs no introduction. His personal “Blackbird” board fetched over $27,000 at his own auction, making it the third most expensive board ever sold. The board has lyrics to the Beatles song “Blackbird” written on it by Paul McCartney, hence the name. It’s also plastered with Tony’s personal decals.

He was using this board since 2011 when he did that pro skate demo in Mumbai, India. The lyrics and McCartney signature were added later for the auction.

Tony chose “Blackbird” as the song to go on the board because he really wanted McCartney to sign it and he wanted to be able to fit an entire song on the deck. McCartney, who told him he had tried to skate one time with his grandson and fell off, was happy to inscribe the board. Some believe that Tony, hoping to drive up the price of the unique board for charity, may have bid on it himself a few times. 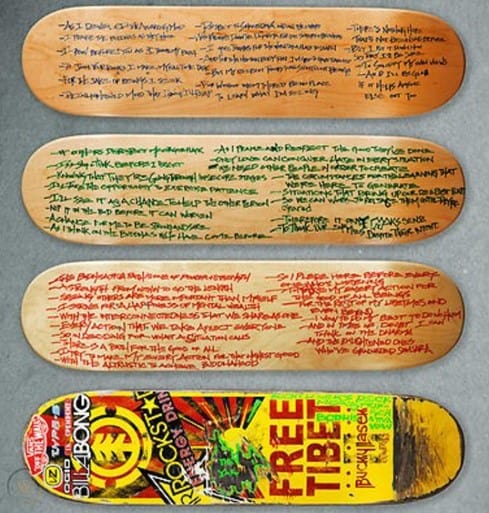 Buck Lasek and Adam “MCA” Yauch’s four-board set sold at the same Tony Hawk auction as other entries on this list. The boards were all autographed by the late MCA, as well as inscribed by Beastie Boys lyrics from their hit song, “Bodhsattva Vow.”

The auction raised funds to build new skateparks. The Lasek and Yauch set was the second most expensive sold at the whole event (see below).

Adam Yauch was a rapper, bassist, filmmaker, and even a Buddhist. He was one of the founders of Beastie Boys, which is why the lyrics ring true on this posthumously-sold set. Yauch died earlier the same year of parotid cancer. 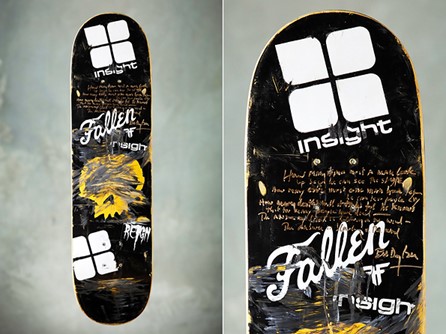 The rarest skateboard is the Blowin’ in the Wind board. “Blowin’ in the Wind” by Bob Dylan is quite possibly the ultimate protest song, the song that propelled Dylan from a Greenwich-hopping hipster club singer into a cultural phenomenon. For skateboarders, as for musicians, rebellion is an anthem to life.

This board was inscribed with a passage of the song by hand and signed by Bob Dylan himself. Skateboarder Jamie Thomas also put his spin on it. The result was the crown jewel of a Tony Hawk auction in 2012, selling for $38,425 and becoming the most expensive deck ever sold.

The song, “Blowin’ in the Wind” was originally a two-verse protest song first sung in 1962. Dylan later added a third verse. The song became popular not only in hipster circles but also as part of the civil rights movement.

The rarest skateboards in the world have fetched thousands or even tens of thousands of dollars at auctions. Many have famous owners, personalized artwork, or simply represent the classic California rock and skating scene. Not all these boards are vintage – skateboarding itself, after all, is only a few decades old. But all these boards are valued so high because of their design, cultural relevance, and celebrity status. If you have one, you may not even want to risk riding it.