8 Rarest and Most Expensive Pepes

Pepe the Frog or the “sad frog” began life as a comic character in 2005, in the “Boy’s Club” series. He’s known for his sad face, wrinkled lips, and the catchphrase, “Feels good man.” Lazy, childish, and misbehaving, Pepe and his friends in the comic aren’t good role models. But nowadays, they’re not particularly important as their original incarnations anyway.

Now, Pepe is known almost exclusively as the meme series generated by 4chan, where users drew the character in increasingly sloppy, abstractly sad or nihilistic drawings that took off across the internet. As Pepe cards and original pieces of Pepe art, Pepe fused with cryptocurrency to become a fake currency, PepeCash, that has created a new alt-future breed of art market.

On this market, rare pieces of Pepe art have sold for the equivalent of millions of dollars in total. Here are the 8 rarest Pepes out there. 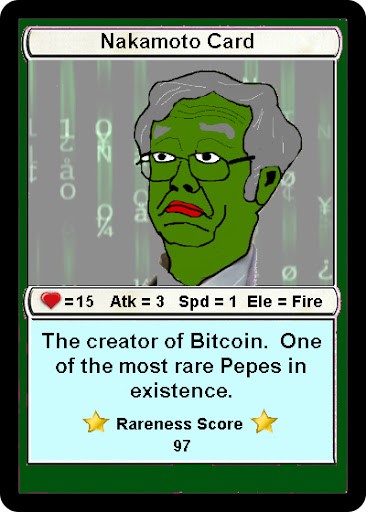 Satoshi Nakamoto is a name or a pseudonym of the person (or possibly, the group) that created bitcoin, the white paper, and the technical standards (in programming, this is called the “reference implementation”), as well as the first blockchain. He/she/they disappeared in 2010, leading many to claim to be Nakamoto, with no one being able to claim the title permanently.

It’s only fitting then that Nakamoto, or the idea of Nakamoto, should have its own Pepe card. The blockchain is, after all, what makes trading cryptocurrency like PepeCash possible. A Nakamoto Pepe sold for $2,000 around 2017.

The Nakamoto Card is listed as having health of 15, attack of 3, speed of 1, and the element of fire. There are about 300 first series Nakamoto Pepe cards out there. 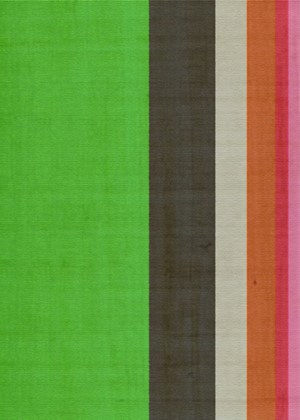 Modern Pepe, certainly one of the cleverest Pepe designs out there, depicts a palette of colors derived from the original Pepe drawing: his bright green, brown, beige, orange, red, and pink. The artist arranged them in bars of solid color textured like canvas paneling, decreasing in size. Artists like Rothco have been known to paint like this – if you think about pretentious high-rise office waiting room artwork, you’re probably thinking of Rothco, or something like it.

The value of Modern Pepe has shifted much more irregularly than most Pepe art, which usually follows a straight climb or descent in value over time. It may be due to the fact that there are 100 Modern Pepes out there, whereas some of these other pieces are one-of-a-kind. 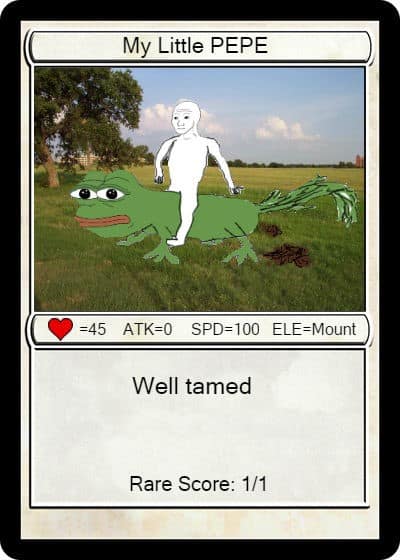 My Little PEPE is one of the rare, one-of-a-kind Pepe cards that someone bought for 1,000,000 Pepe Cash, roughly the equivalent of $3,300. American Pegasus, the new owner of the card, has stated that he’s only interested in the rarest cards. The original owner of My Little PEPE, however, didn’t list it for trade on Counterparty, demanding instead a direct payment of PepeCash.

The card is listed as having an attack power of 0, health of 45, speed of 100, and the Mount element. The picture is of a meme guy riding a Pepe horse in a meadow.

The description of My Little PEPE just says, “Well tamed.” 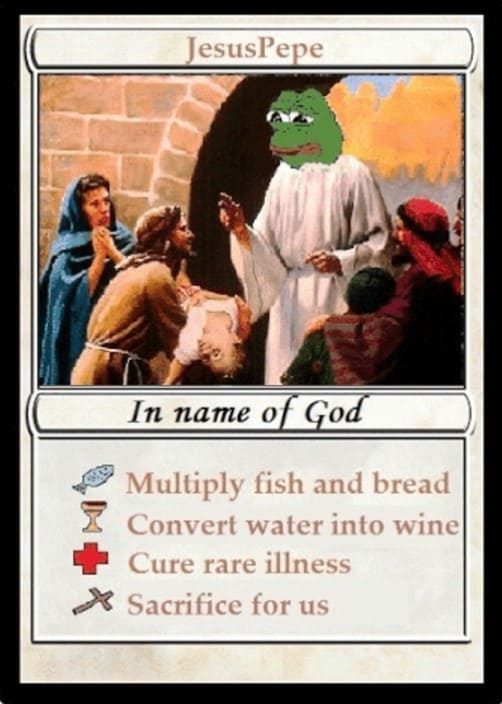 The JesusPepe is a card with shifting faces depicting art from the Bible in both children’s illustrated and classic painting styles. Pepe’s head replaces Jesus’s in each instance. In the crucifixion scene, Jesus has an entire shirtless Pepe body.

Beneath the picture, the JesusPepe card says, “In name of God.” Its abilities are listed as “Multiply fish and bread, Convert water into wine, Cure rare illness, Sacrifice for us.” This rare Pepe card has been valued at $6,500 or more.

Since Pepes are sold for PepeCash or another cryptocurrency, their value on the trading market fluctuates. JesusPepe saw a meteoric rise in value in 2017, up to a peak value of over $6,500. It has been dropping steeply since then. 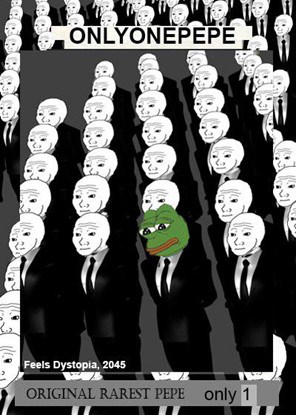 OnlyOnePepe is a Pepe card with only one edition. It depicts a depressed Pepe in a suit in a crowd of blank-faced meme men, above the caption “Feels Dystopia, 2045.” This plays off the common Pepe trope of being depressing and prophetic, looking into the future and feeling depressed, chaotic, or destroyed.

This card is posted over a caption that says, “There is only one REAL Pepe and his name is Kek. – Tommy. –.” We’ll be talking more about Kek right about now. 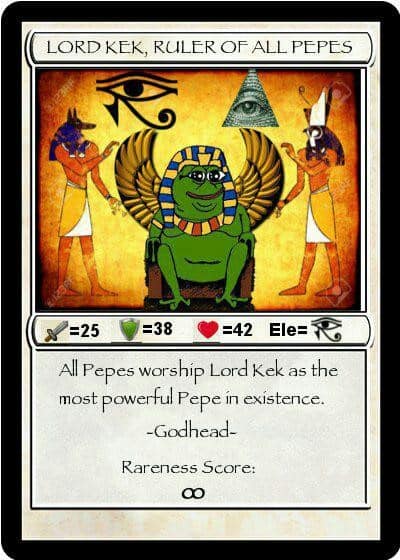 As many of you may know, Pepe the Frog in recent years has been co-opted by alt-right Conservative groups as a sort of make-shift mascot. He has been seen wearing a “Make America Great Again” cap, which to the Right makes him a symbol of freedom and to the Left, a symbol of hate.

This dichotomy is never more pronounced than when Pepe takes the form of “Lord Kek, Ruler of All Pepes” who represents a bizarre fantasy religion in the pop culture of virtual alt-right message boards. He seems to be a god of chaos, which makes his actual tenants a little difficult to pin down. A Lord Kek Pepe card has sold for $22,720, likely to someone who is very into the chaotic nonsense of the whole thing.

The name “Kek” began as an accident during a video game match online. During a World of Warcraft match, where the chat translates speech into cryptic text, the phrase “LOL” was rendered as “KEK.” Once someone pointed out that there was an Egyptian god named Kek, a bringer of chaos and destruction, the rest was inevitable.

How did it connect to Pepe, you may be wondering? In Greco-Roman art, Kek is depicted as a man with the head of a frog. 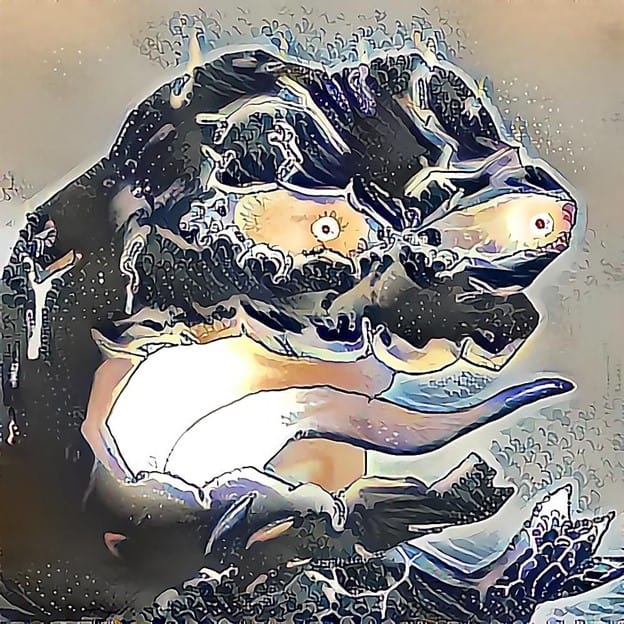 This is not actually the price of a single Pepe, so this may be cheating a bit. But a set of 20 rare Japanese Watercolor Pepes sold for $26,000 in 2018. These animated Pepes by the artist DaVinci9 were the subject of some controversy after the bidding ended, as users wondered if the lots were fixed or if the prices were purposely inflated.

Still, it didn’t stop this set from being sold as one of the most valuable Pepe sales of all time.

At the same auction, 500 passports to Kekistan were sold for 20,000 in PepeCash. If there’s one thing that perfectly describes the online community of crypto traders and chatrooms, it’s Kekistan.

Kekistan is a fictional country where the people or “Kekistanis” worship the aforementioned Kek. In 2017, Kekistan became a trending topic on Twitter after Sargon of Akkad talked about it on YouTube. The people are of the ethnicity “shitposter.” And fictional passports to this fictional place of shitposting sold at a real auction for the USD equivalent of $875. 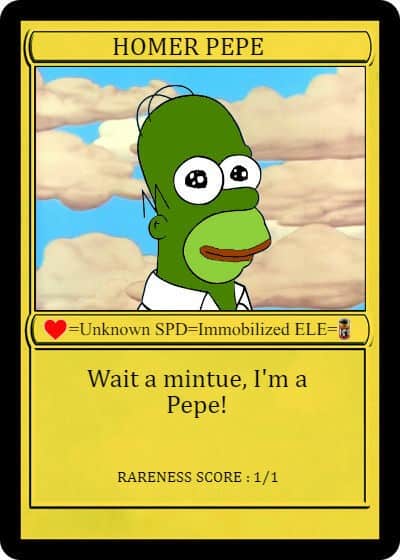 The rarest Pepe is the Homer Pepe. This user-generated card art, one of the few with a Rareness score of 1, meaning it’s as one-of-a-kind as any piece of art, sold when it was created in 2016 for a few hundred dollars. Then, after being showcased in 2018 at the Rare Art Labs Digital Art Festival, it broke every Pepe value record by selling for $39,200. But that’s not where the story ends.

The Homer Pepe was then acquired by a new owner and traded for Ethereum, the popular cryptocurrency, for an amount that is the equivalent in dollars of a staggering $320,000.

NFTs or non-fungible tokens like the Pepe cards can now be sold at live auctions. Homer Pepe was the most expensive NFT of all time the second time it sold. The last time, it blew everything else out of the water. It was even featured in the documentary, Feels Good Man, which won awards at the Sundance Film Festival.

Pepes were once a reference to a character in a comic and nothing more. Since then, they have transformed into an icon of hate for many, the god of shitposting for many others. As art, they represent a new form of art trading where artists drive demand and conduct sales without third-party interference of any kind from galleries, evaluators, or sellers.

The Pepe art world has seen some crazy sales in its day. We’re going to assume that as crypto becomes more mainstream, PepeCash and the corresponding Pepe art are only going to become more decentralized, widely traded, and valuable.

10 Most Expensive Makeup Brushes Ever