Pyrex, which was originally made of low-thermal-expansion borosilicate glass, was first introduced in 1915 by Corning Glass Works. Beginning in the late 1930s and 1940s, Pyrex began offering a number of kitchenware products, especially casserole and serving dishes. In the 1950s, Pyrex started adding fun patterns to its kitchenware items and they exploded in popularity. Some of these items were limited edition promotional pieces, while others were employee gifts. These Pyrex patterns have become rare and are sought after by vintage Pyrex collectors.

As of June 2021, the information on this list is as accurate as possible and will be updated as needed. With the exception of the rarest Pyrex pattern, the rest of this list is arranged in alphabetical order.

Why It’s Rare: Only offered through Dainty Maid brand
Year(s) Produced: Late 1950s
Featured On: Mixing bowl (No. 403)
Current Price: None currently listed on resale sites, but typically sells for hundreds of dollars 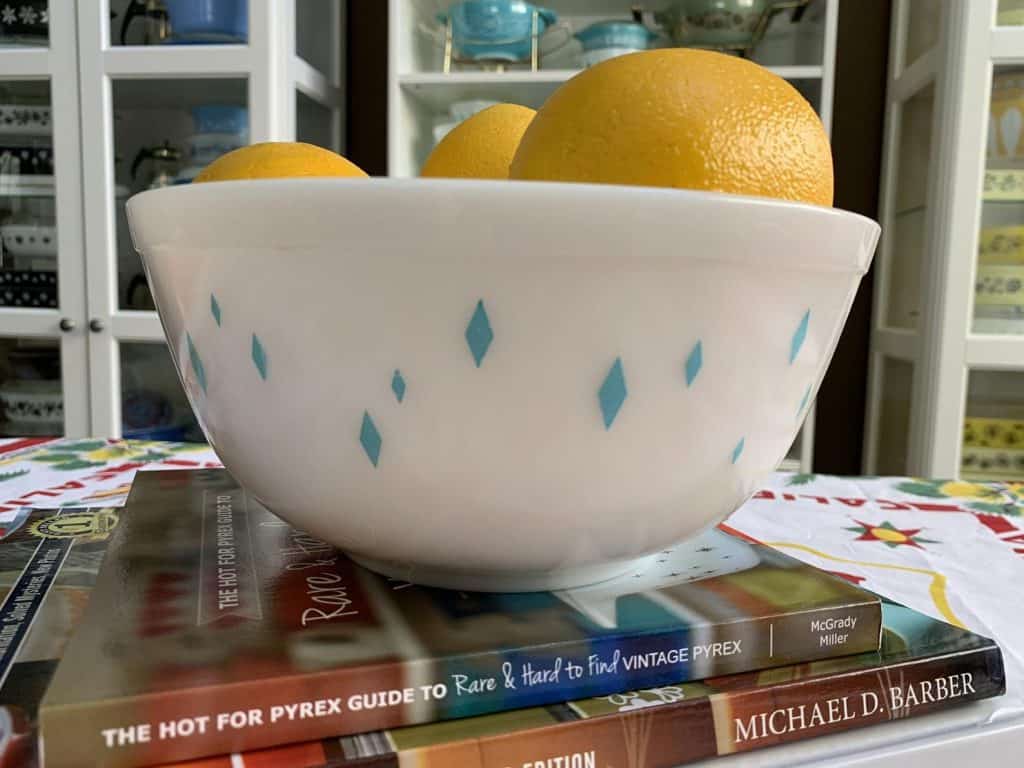 The Turquoise Diamonds Dainty Maid serving bowl came with a cradle and glass lid that had a metal handle that matched the cradle. 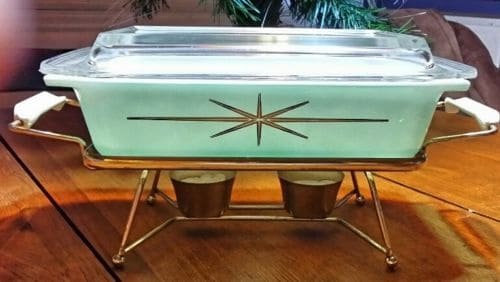 Starburst, which is officially known as the Cinderella Serving Casserole, was a promotional item from 1960. This rare pattern came on a turquoise two-quart Square Space Saver, that came with a cradle and double-candle warmer. Starburst is one of the most wanted rare Pyrex patterns, but the the Cinderella Serving Casserole almost never turns up for sale.

The Starburst pattern was only used one other time, on a black Space Saver Casserole with a gold design. The release date of that dish is unknown and it may be even rarer than the turquoise Cinderella Serving Casserole. 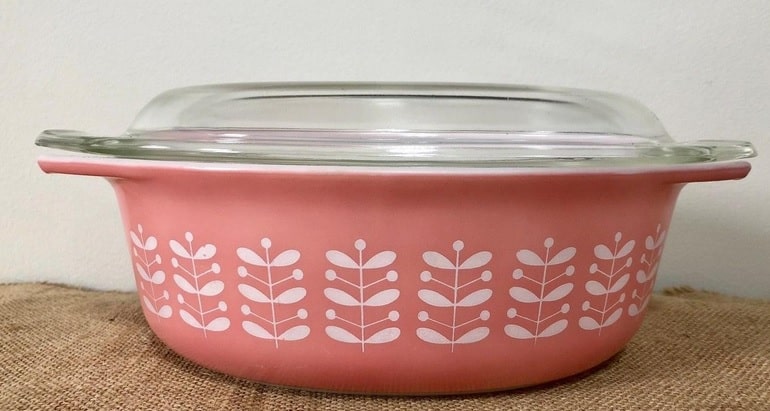 Pink Stems is yet another rare Pyrex pattern that has an unknown provenance. There is very little information about Pink Stems and no one even knows if the pattern has an official name. Every Pink Stems piece that has come up for sale is a small oval casserole dish with clear glass lid. It’s believed that the Pink Stems casserole dish was a limited promotional item from the early 1960s.

Why It’s Rare: Very popular, so they get snatched up fast
Year(s) Produced: 1956 to 1962
Featured On: Oval casseroles; divided dishes; open bakers; and space savers
Current Price: $45 to $190

Pink Daisy, which is actually a white daisy pattern on pink background, is technically not that rare because it was produced for a few years on various dishes, but it’s such a popular vintage pattern that it has become rare in recent years. The Pink Daisy casserole dishes came with clear covers, that were marketed for multi-purpose use beyond a cover. The clear covers could be used as a trivet as they fit perfectly under the Pink Daisy casserole dishes and they were sturdy enough to be used as a separate serving dish.

Although Pyrex had released solid colored dishes with patterns for years, Pink Daisy (along with Snowflake) were the first patterned opalware to be released using a new screen-printing process. 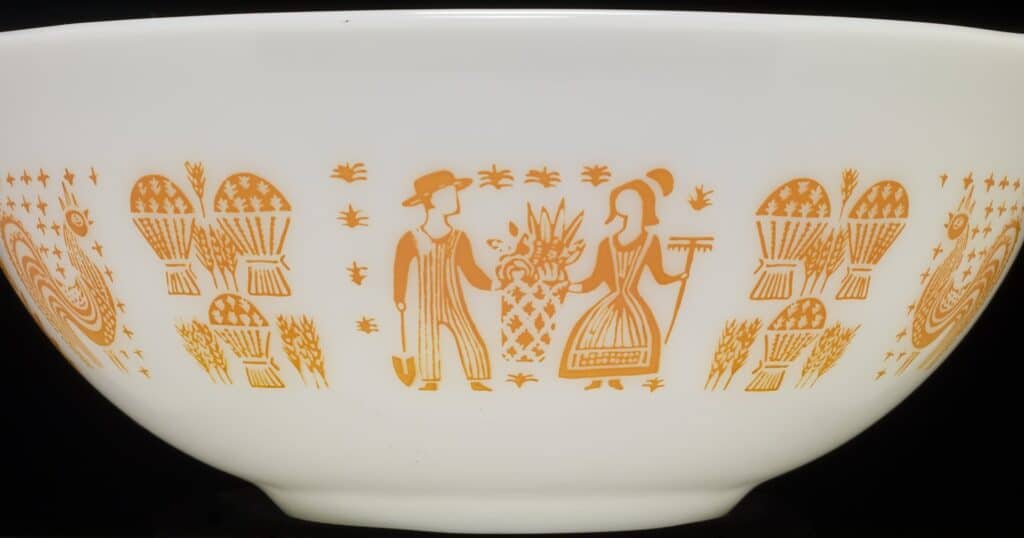 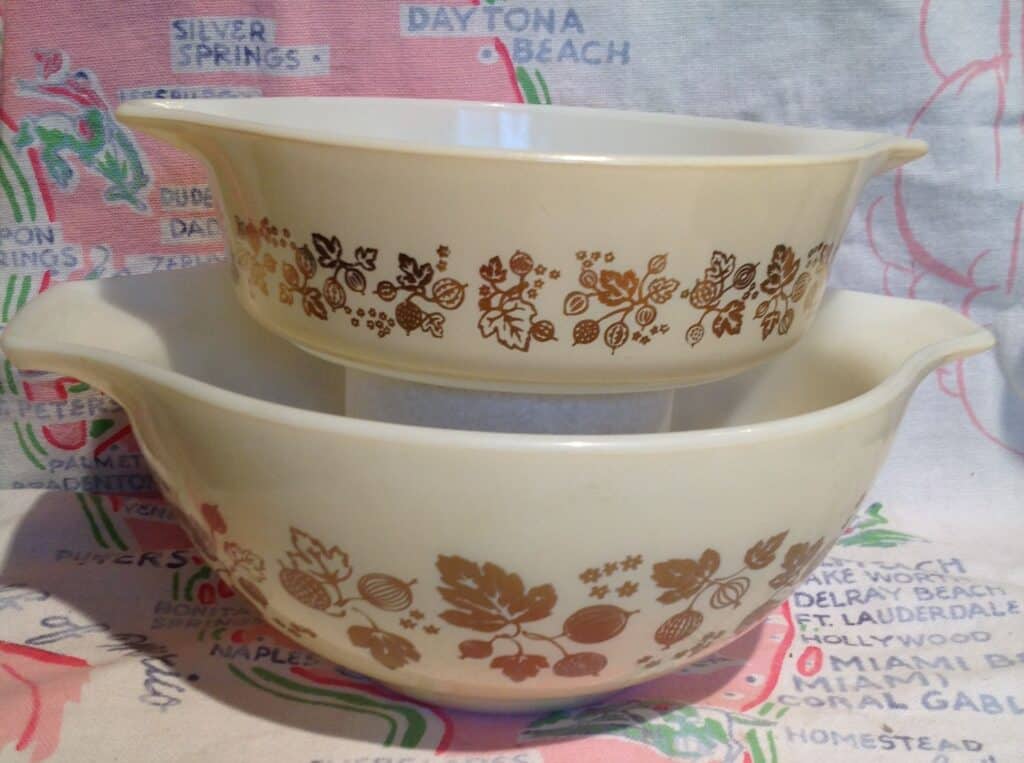 Gosseberry was one of the first patterns released for Pyrex’s opalware line in 1957. The print was produced until 1966 and over that time period, many different colorways were released. While most Gooseberry dishes came in pink pattern on white background or vice versa, black on yellow was pretty rare. However, the rarest Gooseberry pattern is Golden Gooseberry on beige background. The Golden Gooseberry pieces could have been promotional items, test items, or even employee appreciation gifts.

The Black on Yellow/White Gooseberry pattern was only available on the four-piece Cinderella bowl set and was discontinued in 1962. 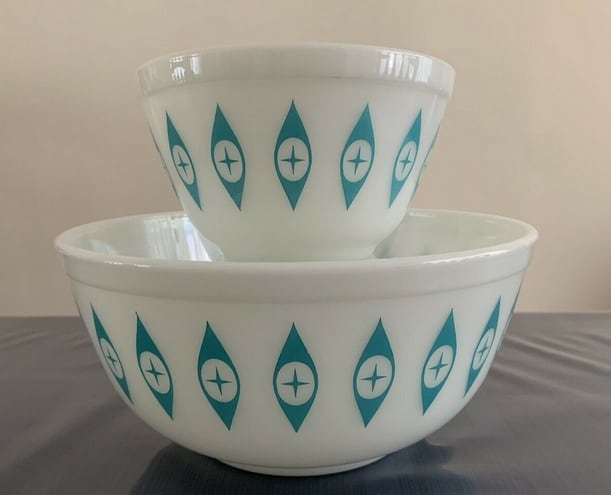 Some pieces with the Eyes pattern don’t have the traditional Pyrex mark on the bottom of the bowls. The mystery surrounding the Eyes pattern seems to have increased the pattern’s desirability and sellers are asking for hundreds, even a few thousand dollars for pieces.

According to the Corning Museum of Glass, the Eyes pattern also appeared on a coffee carafe and a clear one-quart juicer with a turquoise plastic lid. 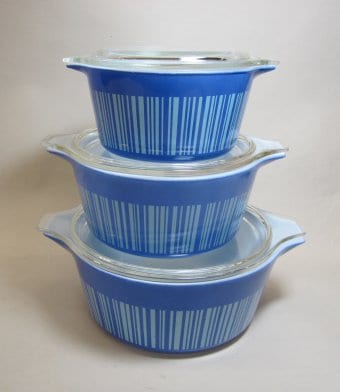 The pattern known as “Barcode” in the Pyrex community was only available in 1966 on dishes that were promotional items or test pieces. While all Barcode pattern Pyrex is rare, the most common of the group is the blue colorway, which is officially called Blue Stripe. Blue Barcode pieces do come up from time to time and can go for around $100 or so. In addition to the Blue Barcode design, there were prototypes made in yellow and orange, brown and orange, yellow and black, blue and yellow, green and white, and black and blue. 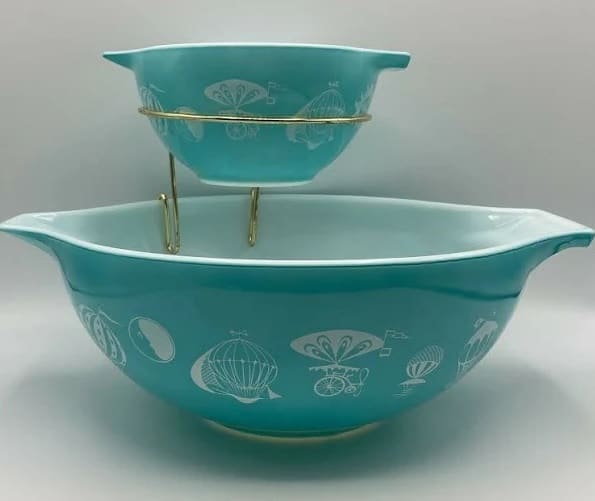 Balloons is one of the most popular of the rare Pyrex patterns out there. The Balloons pattern was only available on the Cinderella Chip and Dip Set as a Spring 1958 promotion. The Chip and Dip set has a beautiful turquoise blue background and white vintage hot air balloon pattern. The bowls also originally came with a gold/brass colored cradle holder that would attach to the larger bowl that the smaller bowl sat in.

Why It’s Rare: Believed to be test pieces or promotional item
Year(s) Produced: 1959
Featured On: One-quart round casserole dish (No. 473)
Current Price: None currently listed on resale sites, but a piece sold for over $4,000 in 2015 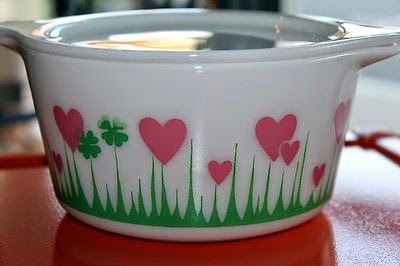 Pretty much everyone in the Pyrex collecting community agrees that Lucky in Love is the rarest Pyrex pattern ever released. Lucky in Love is an elusive print that dates to 1959 and only appeared on one-quart round casserole dishes. While no one seems to know Lucky in Love’s exact history, its believed to have been either an incredibly limited promotional piece or even a test piece.

Evidence that Lucky in Love may have been a test piece is that the Corning Museum of Glass has a Lucky in Love piece without hearts, while the piece that had everyone buzzing in 2015 had hearts. The hearts on the Lucky in Love piece, which sold for over $4,000, have minor printing errors that show the green clovers and blades of grass coming through. This would not have been up to Corning’s standards, so these few surviving test pieces may have been taken home by employees.

While vintage Lucky in Love Pyrex pieces are pretty impossible to find, the pattern became so popular after that 2015 eBay sale, that Pyrex re-released the pattern onto its modern glass pieces.

The lid that came with the vintage Lucky in Love casserole dish was opal, which was very unusual for the time period, as Pyrex lids were almost exclusively glass until the early 1970s.

8 Rarest and Most Expensive Ford Broncos Ever Created