Bulldogs are known as loyal, friendly, and incredibly wrinkly friends. The original breed was chocolate colored. Today, many bulldog breeds exist that mix and match colors and patterns, resulting in dogs of various rarity. The scarcest of these can turn a normal bulldog into a prize worth more than $10,000. These are the absolute rarest bulldog colors out there. 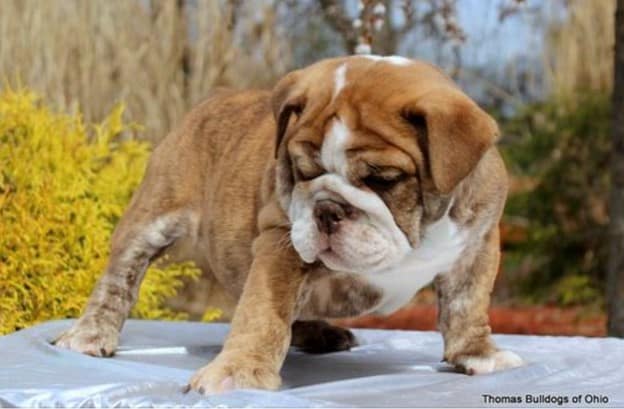 A chocolate brindle, which could also be silver (blue brindle) has a unique coat that makes them valuable. This lovely pattern has randomly placed stripes and spots that interrupt the base color of the coat. Your dark chocolate bulldog will have lighter hair mixed in, not just a different solid color. Brindling isn’t necessarily a different color at all, but more a genetic variance that causes a unique mix of light and dark in the dog’s fur.

The coat pattern called “brindle,” which is also described as “tiger,” doesn’t actually have distinct striping patterns like you may be imagining. The gene that causes brindling is recessive and comes out more as a speckling, often of red or white, with the base color of the coat on top and then the black pattern on top of that. 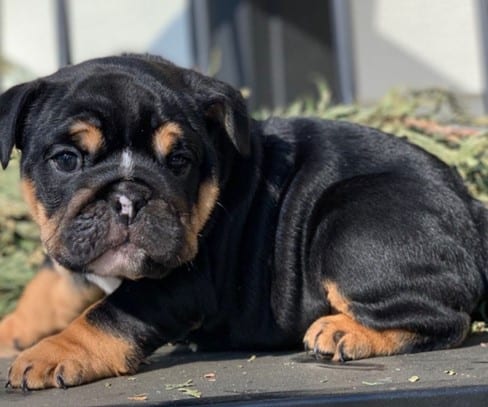 A lot of bulldogs have black genes in their lineage, but to get a black tri you need the cute tan points on their paws, cheeks, and eyebrows. Their eyes will come out dark brown. They may have a fawn undercoat and should always be shiny. Their nose and paw pads especially should be very black. Tri-colored bulldogs are valuable not only for their breed but for how unique the color patterns of each dog can turn out.

When judging the rarity of a black tri bulldog, pay attention to how black it is. Hold the dog against a black object to see if it’s true black or just dark grey. In the sun, they could have a slightly altered color if a seal gene is in their family – the black may be tinted with maroon. 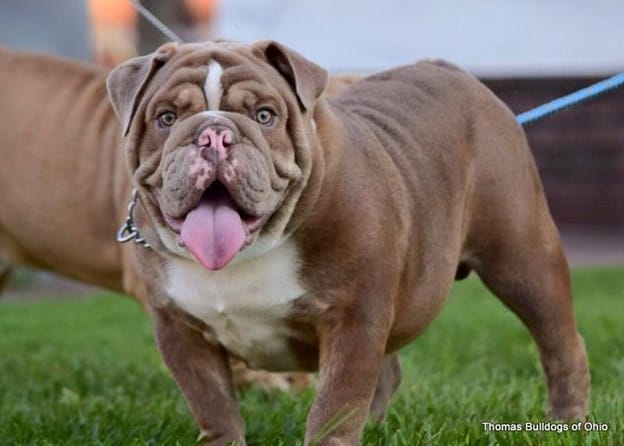 Sables are tri-colored bulldogs, but the genes that make them tri are under-developed. They don’t have clear distinctions between the zones of color. Instead, their coat is mostly brown, but tipped with black here and there. Their background colors can be a tri pattern as well and vary between red, blue, and fawn.

They often have light green or blue eyes. Their sable coats can be various shades of brown, sometimes colored as light as champagne. Since lilac tri bulldogs (see below) are more expensive, lilac sables offer a good compromise. They should only set you back around $5,500.

Spotting true sable patterns can be difficult. Sable is typically a black dog with hair that has lighter roots, usually brown or red. Many different combinations can arise that can cause confusion. Also keep in mind that the word “sable” in the United States doesn’t exist in some parts of Europe, like Germany. This is actually what they call “gray.” If you import a dog, it’s best to keep your terms straight. 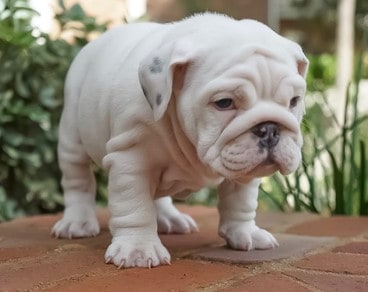 Platinum bulldogs are completely white. They are defined as platinums when 10% or less of their body has color on it. True platinums have none at all. These white patterns are not uniformly genetic and can be symmetrical with other markings, such as those on their belly or face. When the patterns aren’t symmetrical, they can be called parti or piebald bulldogs.

Platinum bulldogs can have multiple mutations and a bright white color that is more or less intense. True platinums often cost $6,000 or more.

Platinum is not technically the color of the bulldog. Rather, it describes a true color bulldog that simply lacks pigmentation due to its genetic lineage. In other words, your dog could genetically be a chocolate tri and still present as a completely white, true platinum. Any specks of color would be in the base color. 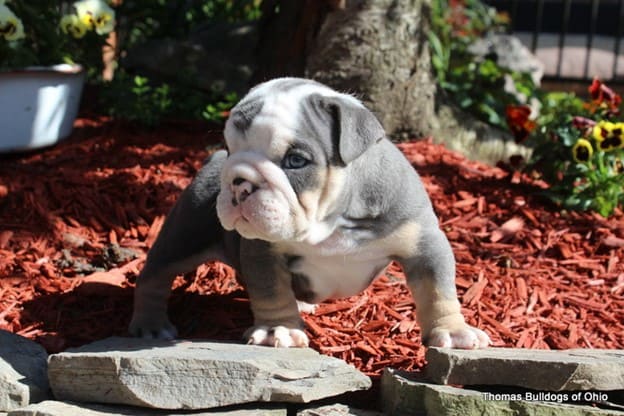 Blue tri bulldogs can “fetch” up to $6,500 when the pedigree is right and they’re adorable enough to be worth every penny. Their bluish green eyes stand out on their light silver coats. You’ll notice tan points on the eyes and chest, kind of like a doberman’s but much smaller and crinklier.

Blue bulldogs begin their lineage as black dogs until they are fully diluted by the blue [dd] gene. Some have a fawn undercoat when you rub their fur the wrong way. Almost all of them have blue-gray noses, eyebrows, and paws. These would never be black in a true blue tri.

Blue tri bulldogs are known for having very shiny silver coats. If you hold the dog in the sunlight, it should look gray. However, many blue tri bulldogs carry the seal gene, which could give their coat a maroon undertone. 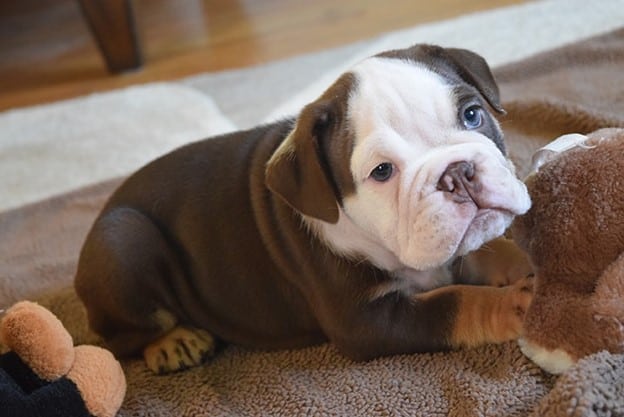 Chocolate tri bulldogs are adorable and in extremely high demand. Their cute brown noses, brown coats, and tan boots make them recognizable and fashionable as pets. The deep blue eyes only sell them even more.

For a solid hazel and dark brown-coated chocolate tri, many people are willing to pay upwards of $7,500 to own these delectable dessert-like roly-polies for themselves.

Tan points typically appear on the eyes (they look like coffee-colored eyebrows), shoulders, cheeks, tail, and feet. They can be obscured by other genes, but almost always emerge in a pure chocolate tri. Keep on the lookout for these tan points, if for no other reason than that they give the dog personality. 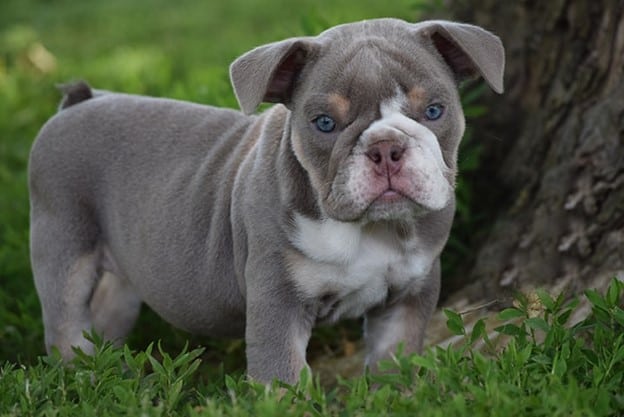 Lilac tri bulldogs sell for showstopping amounts, up to $9,000, when the breeder gets the color just right. They don’t look like any other breed. Their coat is base chocolate, which means that a lilac tri can have more or less brown coloring. However, a blue gene lightens the coat into a lighter champagne color that gives the lilac tri its unique look. Icy, aqua blue eyes add to the rarity, as do a potential assortment of random, cute tan points all over.

Due to the lilac tri being a base black dog diluted by two genes (brown and then blue), their shiny coat can have a unique color hiding in there. Depending on the light, lilac tri dogs can shine slightly pink or green because of this unique heritage. 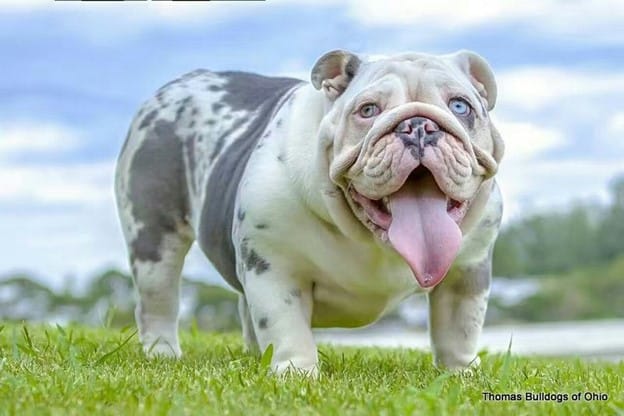 The rarest English bulldog color is Merle. These dogs look similar to the Aussie varieties with bodies that are tri-colored of various darkness overall. They come in blue tri, black tri, and chocolate tri varieties. The famous Merle color is a mostly white body with grey speckles and spots, in addition to these variations. Another major feature is their icy, clear blue eyes that draw immediate stares.

These striking pooches can sell for as much as $12,000 depending on the purity of the breed and the quality of the pattern.

Time is the biggest enemy of rarity when it comes to genetics in animal breeds. As time goes on, a coveted breed becomes more common through breeding and the value naturally goes down. This means that this list will only be relevant for a few years as breeders continue to experiment. It also means that by default, Merle is one of the newest colors of bulldog you can buy.

English bulldogs are classic, affectionate pets. They bring to mind the countryside, royalty, hominess, and the simplest (and slobberiest) doggy pleasures. However, acquiring these particular breeds is not simple and can set back avid collectors thousands of dollars. Recognizing rare breeds and finding a beautiful one-of-a-kind pooch may not be easy. But it’s going to be worth it.

10 Rarest and Most Expensive PS4 Controllers Ever