8 Rarest and Most Expensive Ford Broncos Ever Created

Ford’s answer to the jeep, this amazing compact off-road SUV called the Ford Bronco, was actually discontinued for a while. They exploded in popularity in the 60s but fell out of style until Ford replaced it with the Expedition in 1996. However, as of 2021, the Ford Bronco is back!

This means that for the first time in 25 years, new Broncos are coming hot off the line for the people that miss them. Both perfect retro models and the current newest editions can command incredible prices since at the time of writing, both can be equally rare. Here are the 8 rarest Ford Broncos you can buy. 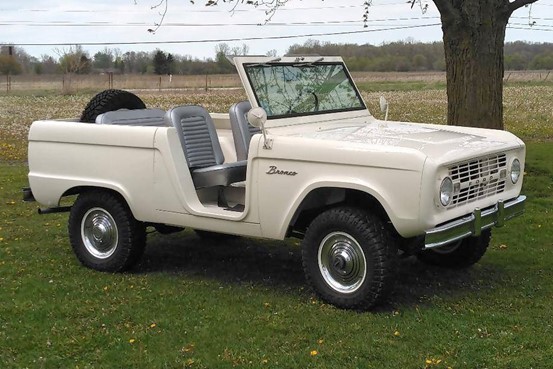 This truck is a rare U13 roadster, one of the first 200 Broncos that came off the assembly line in 1966. This model that is currently up for sale in Township, Michigan for $69,500 has been restored for six years. It had its shell professionally repainted on a rotisserie in classic Wimbledon White. All the insides were rebuilt, the head was redone, and even the flywheel was resurfaced.

One thing worth mentioning is that Broncos in ’66 all had silver metallic seat fabric. Since this had disintegrated, the reseller specifies that he recovered skins from a Bronco graveyard to accurately recreate this look.

Collectors affectionately call this particular model the “Budd” truck. This is because Ford didn’t even have their own tooling in 1965. This means that the Bronco prototypes at this time were built by a company called Budd. Only the first 200 units can claim to be called Budd trucks. 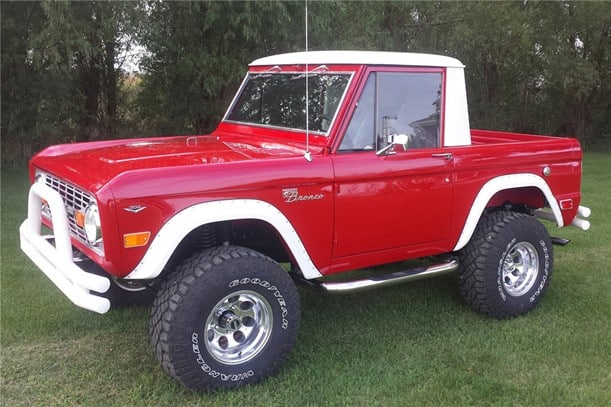 This custom Ford Bronco pickup only had 2,200 models produced in its original 1968 run. Bronco 4x4s weren’t common and this half-cab model was well-worn by the time it made it to the 21st century. This is why it underwent serious repairs and modifications.

These included a frame-off rotisserie restoration and full upgrade. It has new power disc brakes, 5-speed manual transmission, dual exhaust with headers, and more. It’s also been upgraded with electronic wipers and a radio with Bluetooth connectivity for modern users. It sold at a Barret-Jackson auction in Scottsdale in 2017 for $82,500.

The 302ci engine in this rare model (also known as the Boss 203) was built by Ford in the late 60s as a compact, high-performance V8 engine, originally for the Boss 203 Mustangs (hence the name). They revived this engine model in 2012 for that year’s Mustang. The one in this Bronco was completely rebuilt by Dakota Classics with an Edelbrock aluminum intake, as well as a new starter, alternator, and pumps. 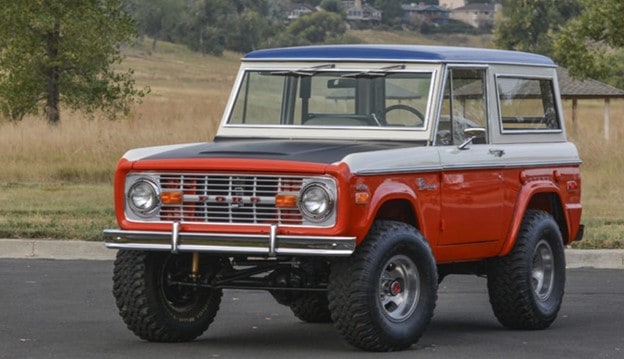 This 1971 Ford Bronco made headlines when it became the most expensive special edition Bronco ever after selling at a Mecum auction in 2017. It pulled in $110,000 and is one of only 450-650 known to exist.

The Stroppe Bronco that raced victoriously in the Baja 500 and Baja 1000 was commemorated with this special edition consumer car, which went into limited production in the early 70s. This car features power steering, a C4 3-speed automatic transmission, and four-wheel drive.

Bill Stroppe had a long history with Ford before his custom Broncos raced Baja. In 1947, he raced a Ford-powered speedboat to victory at Henry Ford’s Memorial Regatta. Much later, he was tapped to custom-build these Broncos for Jones. The special tri-color paint job of the Stroppe racers was recreated here for avid collectors. 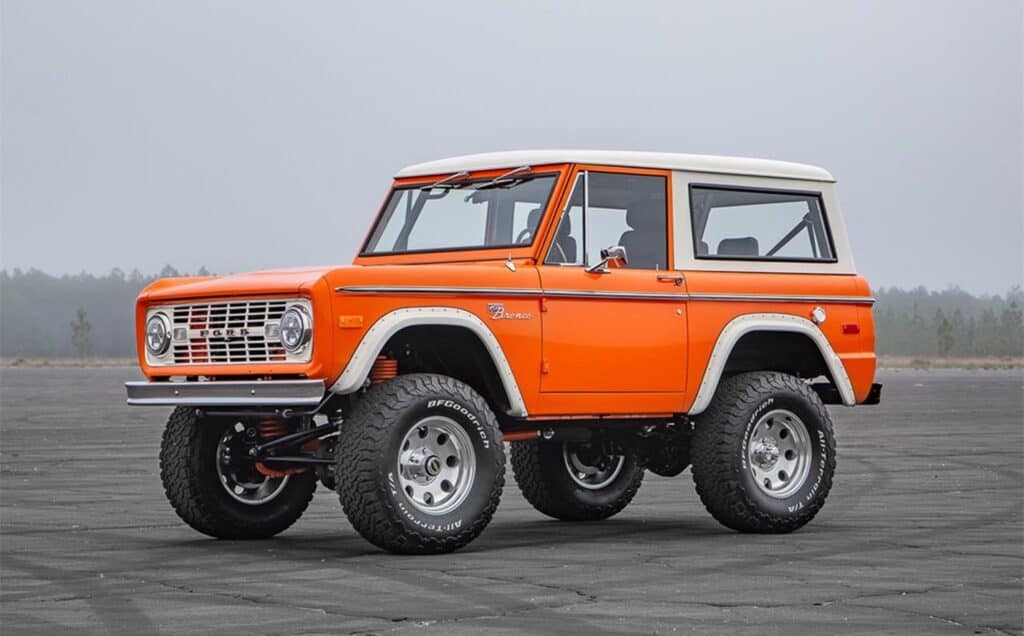 Velocity prepped this frame-off restoration for sale in Pensacola, Florida. It sported a 5.0 Coyote crate engine, 3.5’ suspension lift, 6-speed transmission, and Atlas II transfer case. It was refurbished with a new leather front and rear interior. The A/C system is classic, but the sound system is brand new.

The PPG custom orange and grey paint job completed the package to make this one of the most expensive Ford Broncos of all time, selling for its listed price of $299,000. A completely zeroed-out odometer certainly helped!

This model is tall and not the easiest to get into. This is why this custom model comes with power-retracting steps to improve its modern user experience. 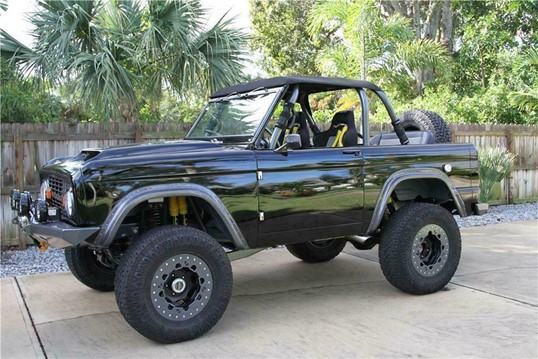 This 1969 Ford Bronco Custom SUV was sold in Scottsdale, Arizona in 2013 for charity. Its sleek black and grey body hides a superpowered V8 engine and classic 5-speed manual transmission. This car has a custom-made wire harness with the classic instruments and gauges, as well as custom front and rear driveshafts.

This car also received some body modifications. These include smoothed and chopped doors, smoothed bed rails, and a sand-blasted frame that was smoothed, welded, and then powder-coated.

At the Bronco’s launch, a three-speed mounted manual transmission was the only available option. By 1969, to make the model more attractive to suburban drivers, a three-speed automatic option was on the way. The 5-speed manual on this particular truck is actually a custom-fitted throwback for modern aficionados, not what the car would have originally had. 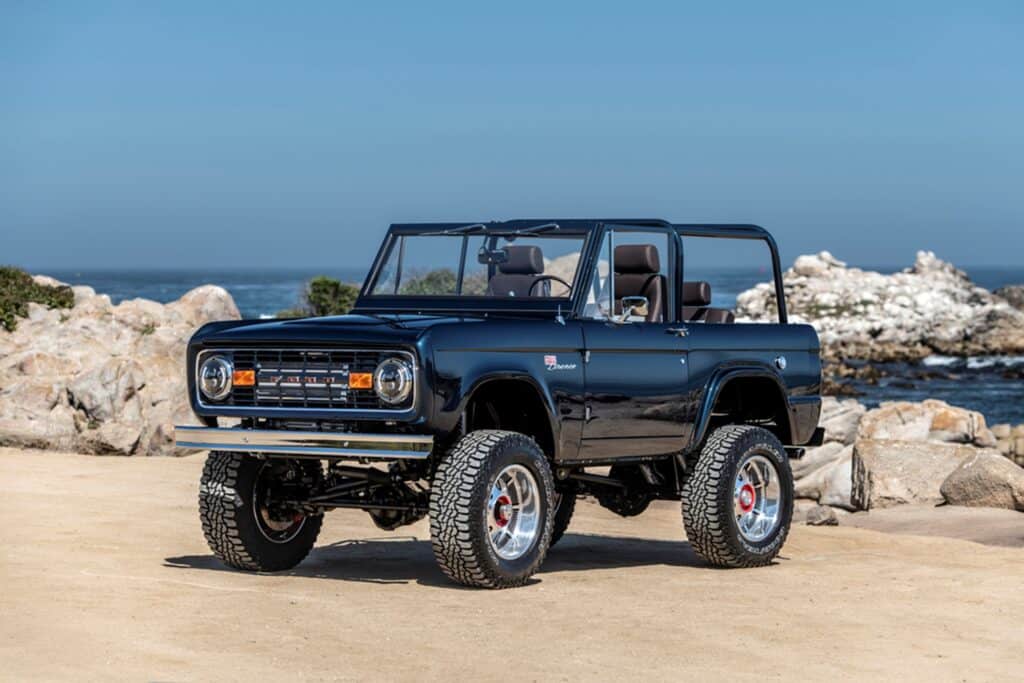 NASCAR driver Ryan Blaney is known for his charity foundation that raises money for Alzheimer’s research. Gateway Bronco restored and refurbished this 1974 Bronco for one of these auctions in 2020 and it took in $650,000.

The engine on this car is a beast, sporting 700 hp, a six-speed automatic transmission, and a 5-liter V8 engine. It’s been glamorized with Porsche leather and trim made from recovered barn wood. It was one of the most popular items at this Barret-Jackson Scottsdale auction in Arizona.

This truck has a ton of retro-inspired updated features fitted by Gateway. These include Eaton locking differentials and a four-link suspension with Fox shock absorbers. It even has modern electric window switches styled to look like the old-fashioned cranks this truck would have had in the 70s. 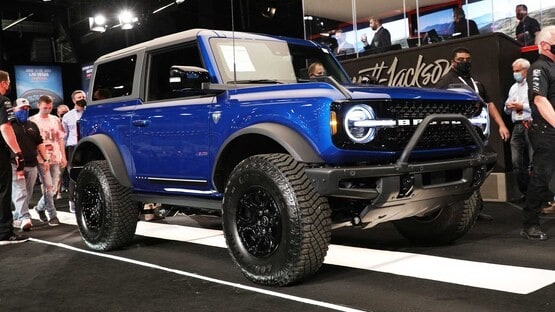 The two-door first edition version of this car was recently sold at a charity auction for over a million dollars! The proceeds went towards the National Forest Foundation, as well as Outward Bound.

Many people assumed that the Ford Bronco was discontinued in 1996 due to its infamous role in the OJ Simpson car chase. This isn’t true, however, as Bronco sales had been slipping for years. The fact was that people wanted full-sized, four-door SUVs and Ford wasn’t making one. So they discontinued the Bronco and got the Expedition going in its place. 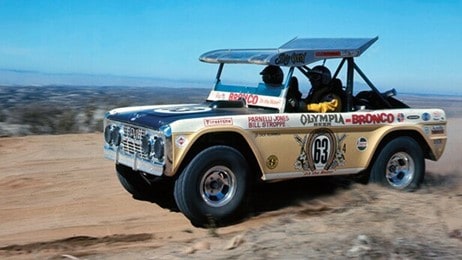 The rarest Ford Bronco is Big Oly. Big Oly is actually a 1969 Bronco beefed up into a custom racing truck. Racing fans know the car by heart as the truck that Parnelli Jones drove to victory in 1971 and 1972 in the Baja 1000. The truck has a V8 engine and a few classy upgrades, such as a roof that opens into a wing for added downforce and an air clearer in the cabin.

Jones has had it all these years but sold it in May 2021 at a Mecum Auction in Indiana. The final price? $1.87 million.

The Baja 1000 is a race on Mexico’s Baja Peninsula. The roads there are known for being incredibly dusty. This is why Big Oly has a custom engine air cleaner fixed to the cabin – it protects its vital parts from the huge dust clouds on the Baja roads.

The Ford Bronco was a popular two-door SUV for decades before Ford retired it in the 90s. The classic status of the original late 60s/early 70s Broncos combined with the modern luxury models that just restarted production in 2021 has generated some impressive auction prices. Some of these cars have sold for over $1 million! A rich off-roader’s dream.

10 Rarest Xbox One Controllers Ever Made