With the Nike Dunk and SB Dunk being revived in full swing in 2020, it pays to look back at the line’s history to see how art, fashion, and skater culture influenced the designs of these shoes. Resale records for Nike Dunks have gone through the roof in recent years, taking a 35-year history and capitalizing on it with the most minimalistic silhouette imaginable for a high-performance shoe.

From the first Nike Dunk High released in 1985 to today, here’s our list of the 8 most expensive Dunks that money can buy. 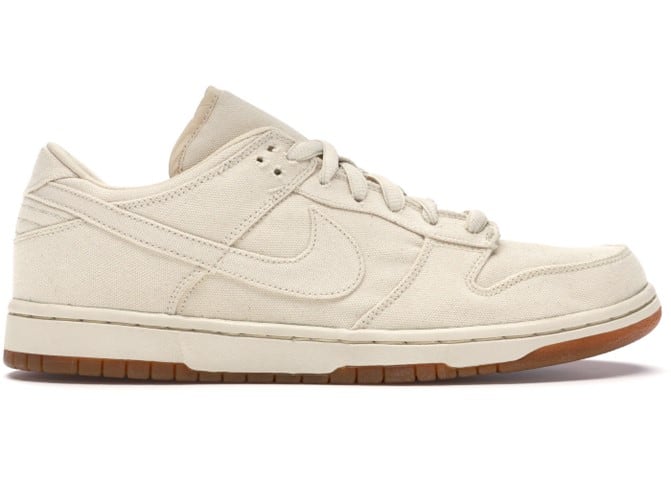 The Nike SB Dunk Low Tokyo is the first in a series of geographical Dunks, including London, Paris, and NYC Dunks, all of which made this list due to short supply. The Tokyo ones debuted in 2004 with only 202 pairs sold via a company lottery.

The shoes are Muslin in color and completely minimalistic in design, without any extraneous branding on the tongue, sides, or sole, other than the Nike “swoosh,” which is the same color as the shoe. They came in a silver box and now sell online for around $12,367 on average due to their utilitarian allure and short supply.

The Nike SB Dunk Low Tokyo was made for the “White Dunk” art exhibit in Tokyo, raffled off to take the pressure off the event since over 10,000 tickets were sold. The ones awarded in the lotto, however, were the only ever sold, making these Dunks ultra-rare and expensive in 2022. 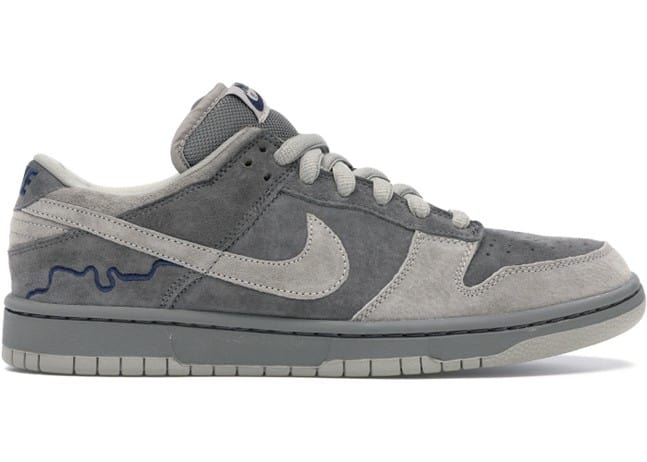 The Nike SB Dunk Low Pro London has long been considered one of the grails of Dunk collecting, coming out in the brand’s early revival years when the release of new Dunks made lines form around the block. Only 202 pairs of these Dunks were sold, so you can bet that they became valuable collector’s items almost immediately.

The Pro London Dunks are part of the international Dunk series that includes the Tokyo ones we already talked about, as well as Paris and NYC Pigeon (see below).

The London Dunks were supposed to debut at an art exhibition called “White Dunk: Evolution of an Icon.” However, this never took place.

The Nike SB Dunk Low Pro Londons sell for an average of $19,598 online.

The muted grey color of these Dunks is meant to evoke the cloudy London skies. The blue squiggly line is the River Thames in England, nicknamed “Liquid History” for how famous and old it is. 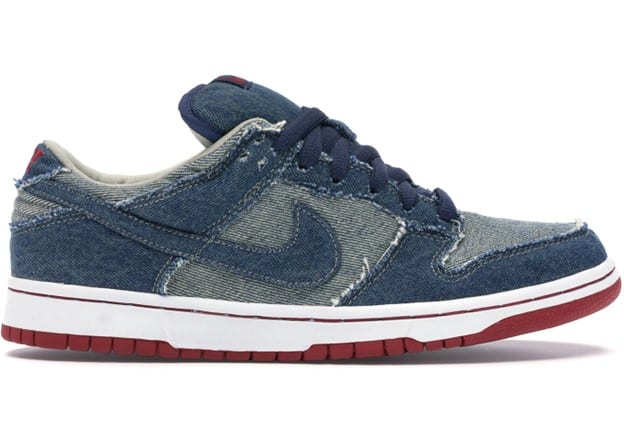 The Nike SB Dunk Low Denim Reese Forbes are shoes made from denim, which like all the Dunks on this list were made in a limited amount. These shoes only had 444 pairs released starting in 2002. They featured colors by Reese Forbes, including a light and dark blue denim pattern with soles that are white with red stripes.

The shoe was made with beige contrast stitching and light denim on the quarter panels and toebox. These rare Denim Dunks sell for an average of $25,000 online.

Natas Kaupas designed the pattern for these shoes. He’s more famous as a professional skateboarder from Santa Monica. In street skateboarding, Kaupas is known as one of the founders in the professional reputation of the sport, famous for doing slides and aerials all around Dogtown, his home turf in LA. 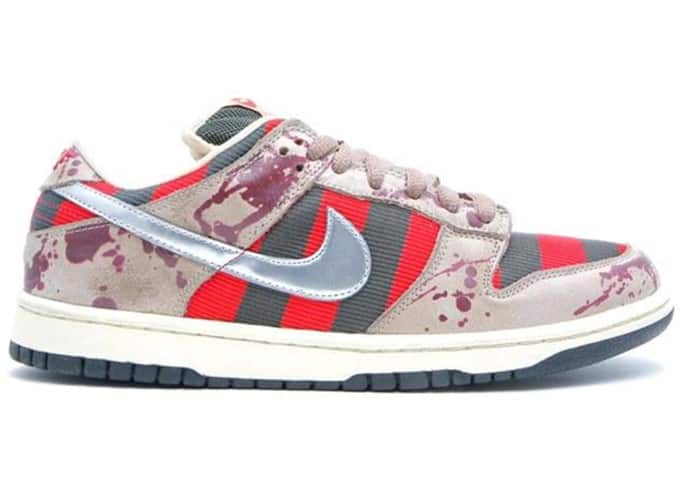 The Nike Dunk SB Low Freddy Krueger shoes are the third in a group of horror-inspired Dunks, the other two being based on the colors of the 1978 poster for George Romero’s Dawn of the Dead and the white/black/red of Friday the 13th.

These ones are based on the color palette of Nightmare on Elm Street, that stripey green and red sweater worn by the film’s villain, Freddy Krueger, complete with blood splatter. The shoes are made of reflective leather that shines silver with the logo “swoosh” the color of Freddy’s blades. The shoes sell for an average of $30,000 online.

The other two horror-themed sneakers made it to retail shelves, but the Freddy Krueger ones were never commissioned, making them ultra-rare. The inside of the shoe displays a graphic of Kruger’s burnt fleshy face for fans of the classic horror film. 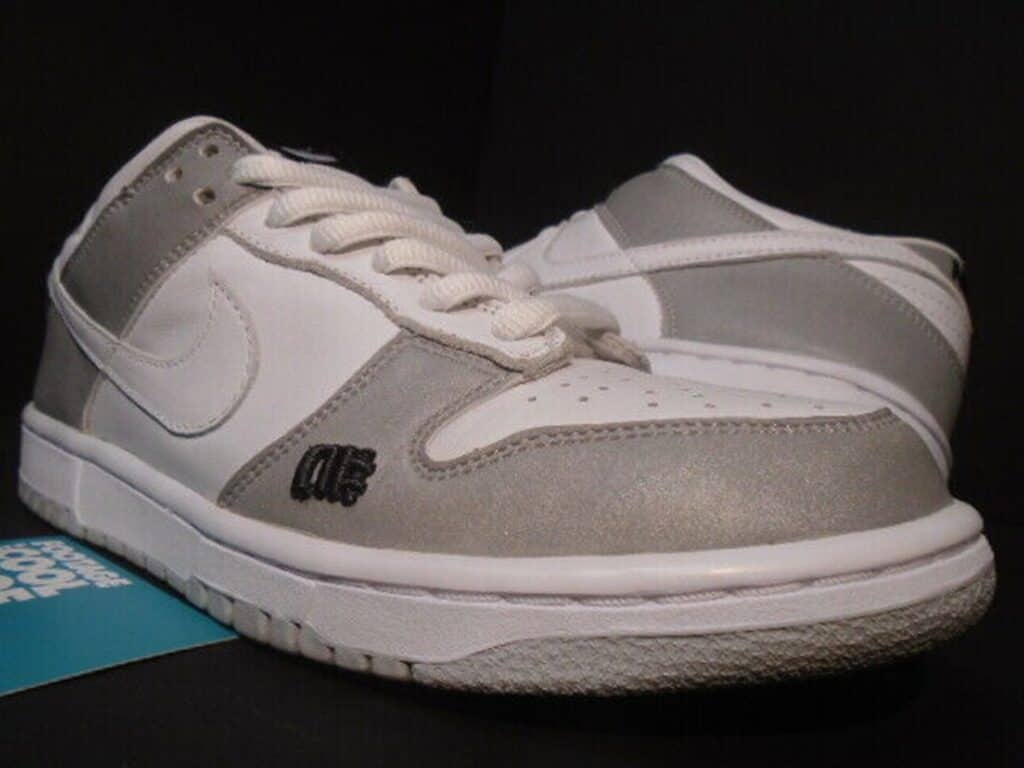 The Nike SB Dunk Low Pro B Alphanumeric A# Promo Sample is colored “white silver supreme” in a one-of-a-kind edition. They were released in January 2001 and were sold in an orange box. They were part of Nike’s first wave of SB Dunks and became some of the most desired.

The fat-tongued design, Air Zoom insole, and raised logo was a new design at the time. Alphanumeric, the skate brand, collaborated on these shoes, later released in an unbadged version. The promo sample is worth up to $32,499.99 on eBay.

Streetwear designer Alyasha Owerka-Moore created these promo dunks. He was raised in Brooklyn and got his start with his mom working on antique textile restoration, then moving on to graffiti design for BYI Crew and the Shut Skates team. 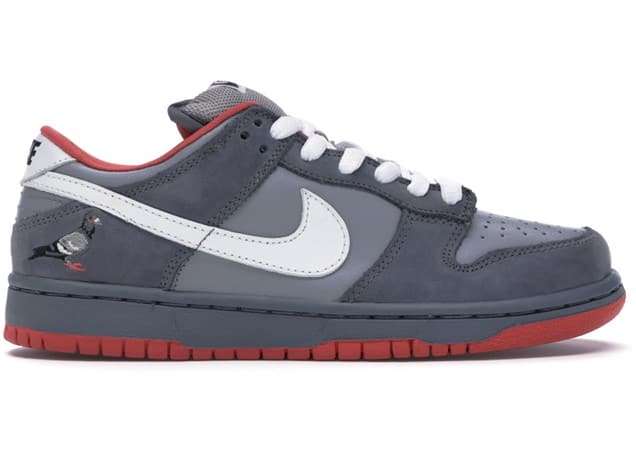 These Nike Dunk SB Low Staple NYC Pigeon shoes are more commonly called the “Pigeon Dunks.” They came out in 2005, sold by Reed Space, a Lower East Side shop owned by Jeff Staple in New York City. Even though only 150 pairs were made, the crowds that collected at the shop got so big that the New York City police had to be called to control them.

The shoes were inspired by the grey-white, light-dark palette of NYC pigeons. It even has an orange outsole to symbolize the pigeon’s foot and a pigeon stitched onto the heel. These Dunks sell for an average of $38,000 in online auctions.

Jeff Staple got his start as a clothes designer/entrepreneur when a custom t-shirt he was wearing caught the attention of the store manager of the Triple Five Soul that Staple was working at in SoHo.

The owner commissioned 12 from him and from then on, Staple kept creating new fashion statements until opening Reed Space in 2002 and eventually creating the Pigeon Dunks. 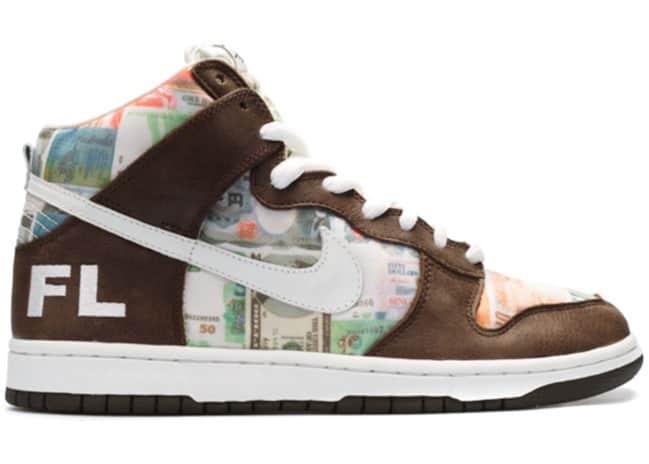 These High Pro SB “Flom” Dunks designed by Futura 2000 set the record for Nike Dunk sales when they took in $63,000 at a Sotheby’s auction, under their Cult Canvas series.

“Flom” stands for “For Love of Money” and was released in 2005 in a total of 24 pairs. Only three of them were sold to the public in raffles while the rest were gifts to friends and family of the designers. The Cult Canvas auction series took in a total of $129,150 for eight lots of designer streetwear after over 180 bids.

Futura 2000, now known as just Futura, is an American graffiti artist who got his start illegally painting in the New York City subway before showing his work at the Fun Gallery. He then painted backgrounds for stage performances of The Clash, the British rock band, for their European tour in 1981.

In addition to these Nike Dunks, he’s also illustrated many album covers, including some for The Clash. 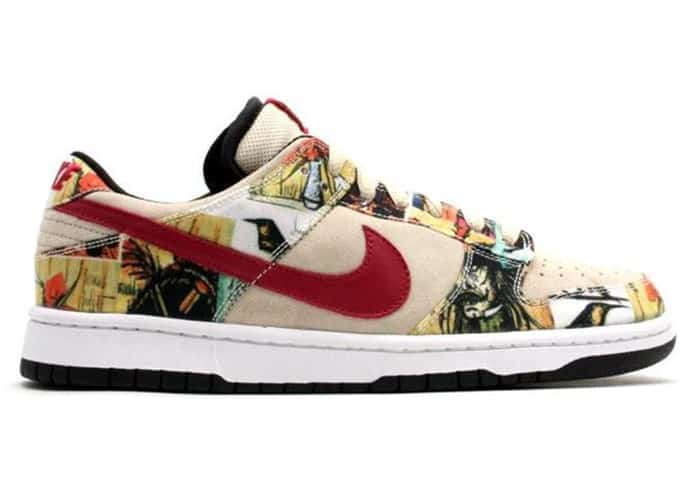 The most expensive Dunks are Nike Dunk SB Low Paris. These Dunks were highly limited editions, with only about 150 pairs known to exist (some sources say as many as 200). They were made for Nike’s traveling exhibition known as “White Dunk” in 2002, which started in Paris, hence the name of these shoes.

The shoes display artwork by Bernard Buffet, the French expressionist, with each pair being visually unique. Proxyeed in London managed to sell a pair of Nike Dunk SB Low Paris shoes for $133,000 (about 100,000 pounds). Discounting game-worn Jordan Nikes, these may be the most expensive shoes ever sold in a private sale.

Proxyeed was formed relatively recently in April 2018 in London, owned by Ryan Thomas Symes. Not much else is known about him in the States.

Bernard Buffet was a painter who died in France in 1999 from suicide after being diagnosed with Parkinson’s, which prevented him from painting. He was known as a member of the “anti-abstract” style, part of the group known as The Witness-Man, or in French, “L’homme Témoin.”