When Mighty Beanz came out with the first series of 60 Beanz in 2002, it took Australia by storm. Manufactured by Moose Entertainment, now Moose Toys, these small capsule toys were released in the United States soon after. The second series with 70 new Beans was released in the same year, confirming the success even more.

The toys were meant for different games, as they have small marble inside of the capsule, helping with the flips and stunts as you roll them around.

Moose Toys came out with different racetracks and games over the years. But the fans focused more on collecting them rather than playing, as the Beanz had illustrations of various animals, action figures, superheroes, monsters, and TV characters.

The company also helped children by releasing several collector edition sets, making the collecting easier. Those special or limited editions of Mighty Beanz are considered a rarity today, and their production finished in 2019.

Most Beanz toys are not very expensive to buy, but limited editions or collectible items can sell for good money nowadays. Learn more about some of the rarest Mighty Beanz with this top 10 list!

Number in Existence: N/A
Reason for Rarity: Available only in the USA and Australia
Collection/Set: Limited Edition/Series 2
Year: 2004 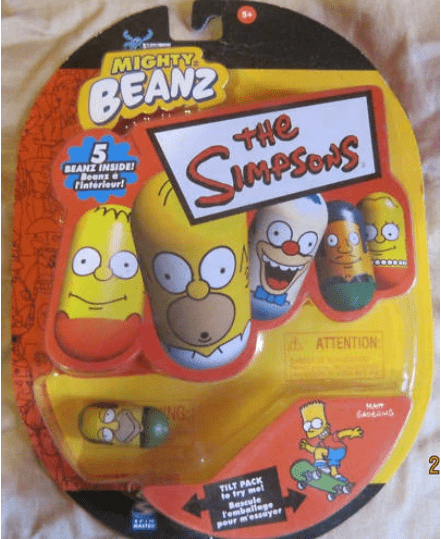 Two years after the market exploded with different Mighty Beanz Series, Moose Toys started collaborations with some TV shows, including The Simpsons. Their Limited Collection came out in the same year as Pokémon, the Second Series of Marvel Beanz, and Hockey All-Stars Beanz.

The big difference was that The Simpsons Beanz was released only in Australia and the United States, limiting their numbers even more. They sold in 5-Packs, a pretty common package for Mighty Beanz packages.

Mighty Beanz had different collections inspired by many TV shows and movies, such as Teenage Mutant Ninja Turtles in 2003, Cars and DC Universe in 2011, and Fortnite in 2018.

Number in Existence: 1,000 or less
Reason for Rarity: Available only in the USA
Collection/Set: Limited Edition/Series 2
Year: 2004 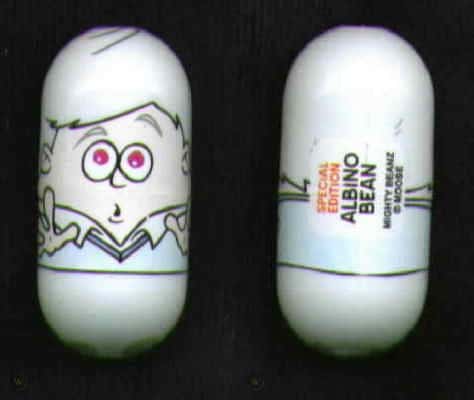 Albino Bean is considered one of the rare Beanz you would be lucky to find in your collection. It was released as Limited Edition in 2002 as an addition to the Second Series of the Mighty Beanz. But the most significant difference is that it was available only in the United States.

Albino Bean doesn’t have any number of products on its back, gaining more attention due to the limited series. Its face is entirely white, with red eyes that stand out. There were a couple of offers of used Albino Beanz for sale over the years. But many collectors keep this one as a souvenir instead.

Almost all of the collections from Mighty Beanz had purposes in different countries worldwide, but this Limited Edition from 2002 was released only for the USA market, following the exploded popularity. 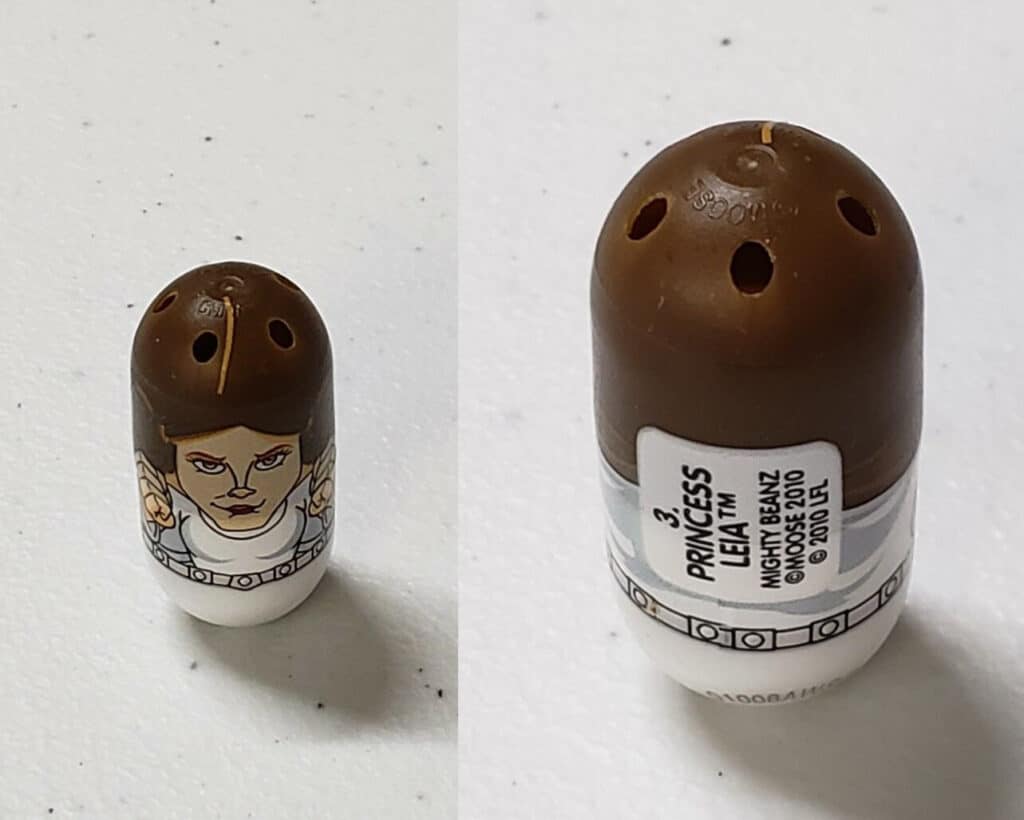 Princess Leia is a well-known character from the Star Wars franchise, portrayed by Carrie Fisher. Limited Edition inspired by Star Wars came in 2010, with 60 unique characters painted on Beanz, but Princess Leia’s Bean was one of the most popular.

Even though this collection didn’t get enough demand as some of the other sets were inspired by modern television and film, it is still a collectible item valuable for collectors. These Beanz were sold only in 4-Packs. The most common bean from the collection was Luke Skywalker and Han Solo.

Star Wars Collection didn’t come back for another edition as some other TV Mighty Beanz did, as other more popular franchise toys drowned it out. 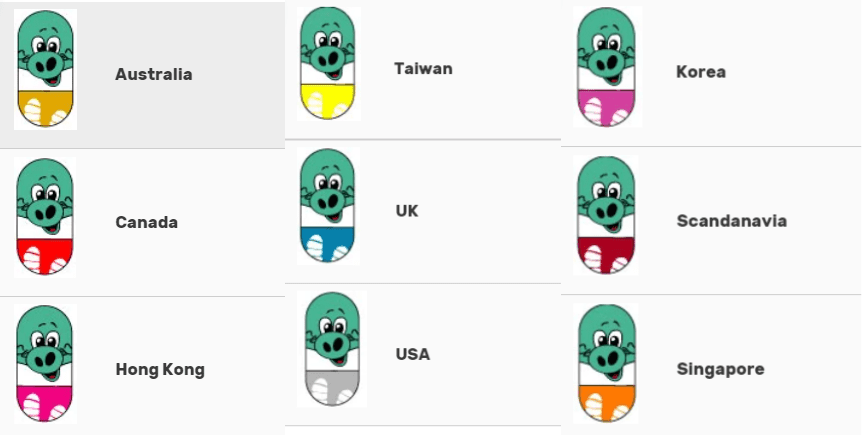 Blue Moose Bean, or simply Moose Bean, is probably one of the most sought-after Beanz. This ultra-rare bean is like a personal addition to the collection by the creator Moose Toys, released as a Limited Edition in 2004.

The Original Moose is wearing a white T-Shirt and blue pants, but there are 14 different variants in which Moose wears differently colored pants, depending on the countries included (Australia, UK, USA, Korea, Italy, New Zealand, Malaysia, Hong Kong…)

Mighty Blue Moose Bean is the host of the Mighty Beanz Gamez each year, acting as the judge of which team is the best Beanz Team at the end of the games. 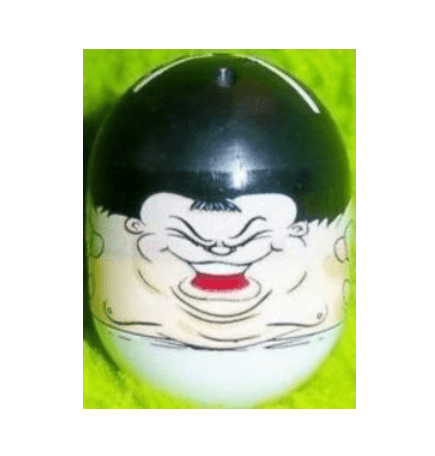 The rarity of Sumo Bean is because this bean is the first Mega Bean to be included in Series 1. It is said to be a mock of Sumo Wrestlers, and it carries the number five on its back. There were a couple of versions of this Sumo Bean in collections, but only this one is a rare mega bean.

Mega Beanz has Ultra Rare Mighty Beanz rarity, as they could be bought only in packs of 6 beans. They are also playable in the Mighty Beanz: Pocket Puzzles game on Nintendo Game Boy Advance.

Mighty Beanz used to be available in different packages – from more common ones such as 3-Bean and 6-Bean packs to rarer 2-Bean and 4-Bean packs. But, neither of those are available to purchase at any of the retailers since Mighty Beanz production is discontinued.

Lizzy, Dizzy, and Wizzy are Clown Beanz from the Limited Collection, released in 2004, with only 500 capsules each. Breakout and Scarecrow Beanz are from the same collection with fewer products, as the rest of the Beanz had a production of 1,000 capsules or less.

These Beanz toys are crazy clowns; Lizzy has a long tongue for eating everything it comes across, Dizzy is lovable but clumsy, and Wizzy is working more as a stand-up comedian. They are colorful circus clowns with flashy makeup and stellar performance skills.

There are several Clown Beanz throughout the Mighty Beanz Collections, but these three are the rarest and most valuable to find. Even with their purpose, some Clown Beanz have ill intentions.

The original series of Mighty Beanz came out in 2002, with 60 Beanz divided into three teams – Rookie, Advanced, and Pro Team. Blood Thirsty Bean was a part of a Horror Advanced team, hence the name. It has 250 Mighty Merit Points, making it one of the two rarest beans from this series.

Blood Bean is explained as a vampire bean, having a red coat and dripping blood on its face. It prefers to train at night, as vampires usually doa, and takes many blood breaks. Moreover, the favorite quote of the blood bean is “This sucks!” according to the collector’s guide.

There is a lot to learn from the collector’s guide, as it explains how Mighty Beanz characters have different rarities by Mighty Merit Points (MMP), on a scale from 50 MMP to 1,000 MMP, the latter being more rare and unique to collect. 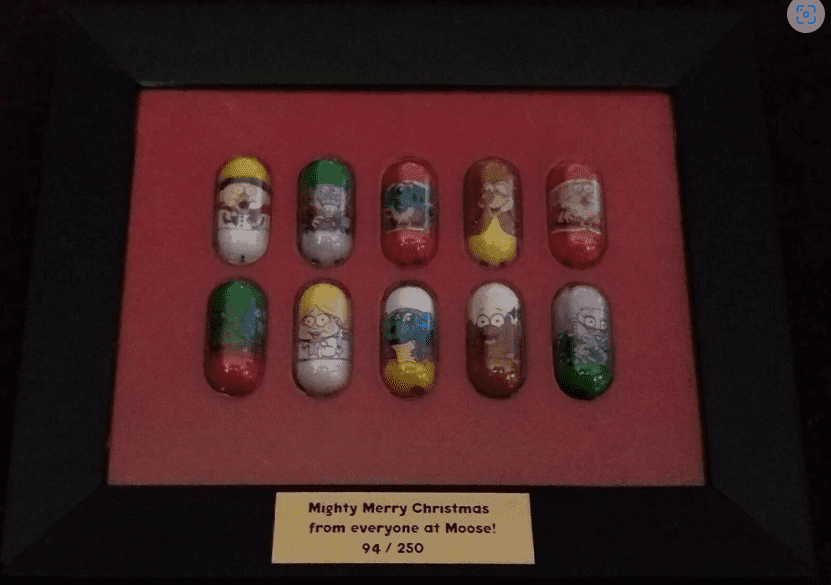 Christmas Beanz is the only Collection on this list, with only 250 sets made worldwide. Moose Enterprise released the Limited Collection for Christmas in 2003. Each set came with a certificate of authenticity, names, and set number, signed by the CEO of Moose Toys, Manny Stul.

Another rarity from the 2004 Limited Edition is a Scarecrow Bean. It has a head full of straws, and of course, Scarecrow Bean hates black crows as they are its biggest enemy – an interesting explanation for this bean from the collector’s guide.

Only 200 of these Beanz were produced, making it one of the rarest collectible items. Similar Scarecrow Bean was released in repeated Series 2 from 2010, but that one is much easier to find, having a higher production number.

The rarest and probably most valuable Might Bean ever made is Breakout Bean. With only 100 beans ever made, Breakout Bean is a true collector’s item. Breakout Bean got its name from the nasty scowl on the prisoner’s face, as he only wants to escape jail and go back to his criminal life.

Limited Edition Collection from 2004, along with Mighty Moose Beanz, is one of the most sought-after collections. The collection consisted of 24 Beanz, with Breakout Bean being the only one with 100 beans manufactured.

An interesting fact about this unique bean is that Breakout Bean’s favorite movie is the Great Escape, and he hates wearing striped clothes in prison.