Eduard Haus III invented the PEZ candy in 1927 in Austria. They spread in popularity throughout Europe, making their way to a larger manufacturing scope in Czechoslovakia. In 1952, they came to New York. By 1956, they created the now-iconic dispenser system that would come to define the brand.

The first themed dispenser was a space gun, followed by a Halloween witch. Then, the first branded PEZ dispenser, a Popeye head, was made in 1958. In 2022, the little pint-sized candies are still going strong!

In this list, we talk about the 9 most expensive PEZ dispensers that you can buy today.

The first Disney-themed PEZ dispenser on this list definitely won’t be the last! This PEZ is from sometime in the late 60s when classic Disney designs were being revived in a lot of their merchandise. This one has a big forehead with sleeping eyes and kissy lips to emulate the end of the film.

The stem is hot pink, and the dispenser head is hard plastic. A Snow White “lavender” PEZ (named for the color of the bow in her hair) has sold recently for $2,600.

Snow White and the Seven Dwarfs was not a safe film to make in 1937. It was the first full-length animated film ever and cost a small fortune to make. The returns were enormous, however, with huge ticket sales, an Oscar win, and critical acclaim happening almost immediately. 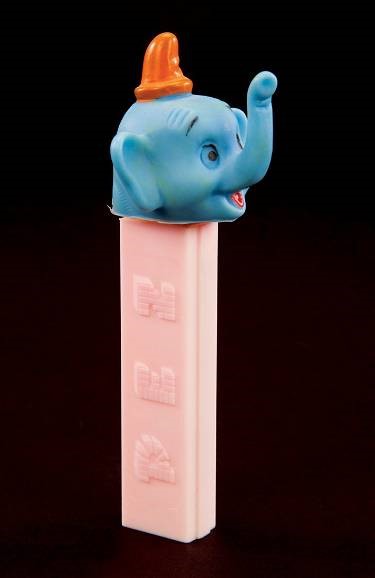 The first Disney-themed PEZ dispenser on this list definitely won’t be the last! This PEZ is from sometime in the late 60s when classic Disney designs were being revived in a lot of their merchandise. This one has a big forehead with sleeping eyes and kissy lips to emulate the end of the film.

The stem is hot pink, and the dispenser head is hard plastic. A Snow White “lavender” PEZ (named for the color of the bow in her hair) has sold recently for $2,600.

Snow White and the Seven Dwarfs was not a safe film to make in 1937. It was the first full-length animated film ever and cost a small fortune to make. The returns were enormous, however, with huge ticket sales, an Oscar win, and critical acclaim happening almost immediately.

The Football Player PEZ dispenser came with 2 flavor refills and a box featuring a kicker when it came out in 1964 and sold for 25 cents a pop. The one that was sold in 2021 for $3,044.56 was unused, though it unfortunately did not come with the box.

The dispenser, head, candy, and packing materials were in a sealed plastic bag. The football PEZ dispenser came in many varieties, according to John LaSpina’s “variety guide.” LaSpina is the foremost PEZ collector and has frequently written about his PEZ collection.

The Football Player PEZ can be found in many colors and varieties. The one that sold for this record amount had a solid blue helmet with a white dispenser. Another rare variety is the reverse: a white helmet with a blue stripe and a blue dispenser. Some also come with red helmets or stripes. 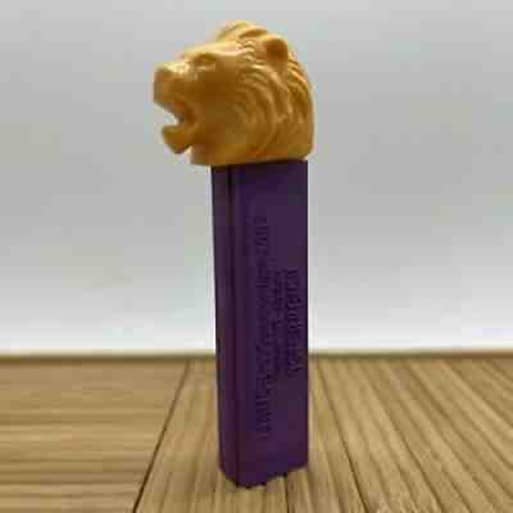 The Purple Lion’s Club PEZ dispenser is an artifact from a 1962 Austrian convention for the Lions Club. Genuine examples have a convention inscription on the surface. The lion head is bright yellow, and the dispenser base is purple.

Even without feet or working springs, these PEZ dispensers are rare enough to frequently fetch over $2,500 at auctions, with one selling in 2021 for $3,075. It was in perfect condition except for a small chip in the dispenser base.

Lions Club International is a non-political service group that is currently active in over 200 countries, with over 1.4 million members worldwide. It was founded in 1917 by Melvin Jones in Chicago, Illinois. 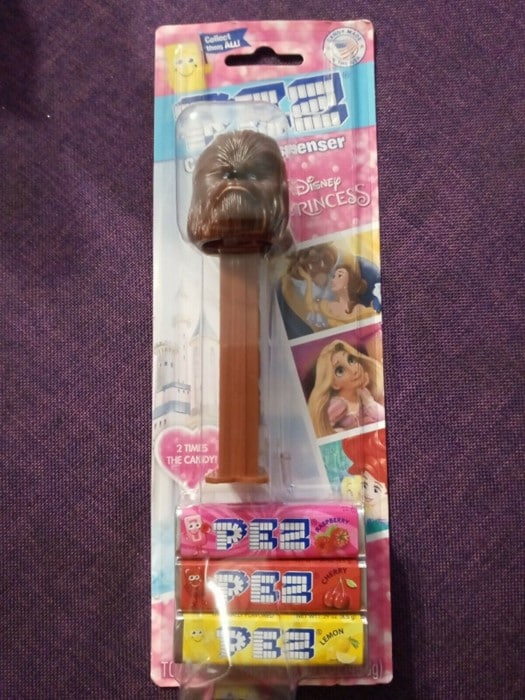 The Chewbacca misprint PEZ dispenser is unique on this list because it’s the only one of these ultra-valuable candy dispensers that you’ll find still sealed in the box. It was made recently and comes with the classic candy packs in raspberry, cherry, and lemon flavors. The dispenser is a hard plastic Chewbacca head, with a Wookie-brown dispenser base.

But if you take another look, you may notice that the cardback says “Disney Princess” on it. On the back, under “Collect Them All!,” the dispenser shows princesses like Cinderella and Snow White rather than Star Wars characters.

Somehow, a few of these Chewbacca PEZ dispensers were packed in the factory into the wrong cardback, leading to a limited misprint. The internet has not firmly agreed on how valuable these are, but at the time of writing, several are listed on eBay for $3,500-$4,500.

Everyone knows about Chewbacca, Han Solo’s furry co-pilot from the Star Wars films. But what you may not know is that the character was inspired by George Lucas’s dog, a hairy Alaskan malamute that used to ride shotgun in his car and stand so tall that people though it was a person.

The dog was named “Indiana,” which in case you were wondering, is also where a certain famous teacher-adventurer got his name. 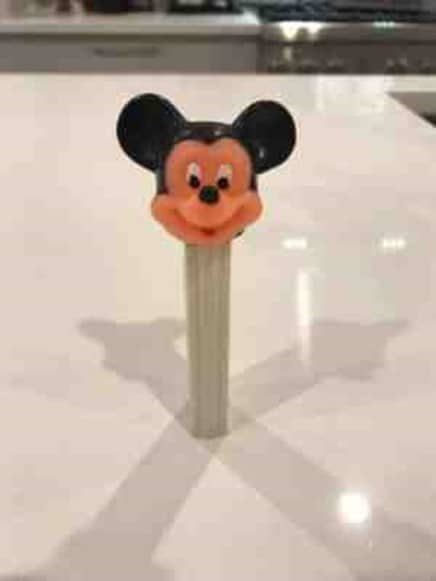 The last of the “softhead” prototype PEZ dispensers on this list is also the most expensive. Featuring none other than the Mouse king himself, Disney’s Mickey, he’s one of 6 prototype Disney denizens to get an unsold PEZ. The others were Goofy, Donald Duck, Pluto, Captain Hook, and Dumbo.

Disney never okayed the dispensers for full production, so the few that exist are worth a lot. This one from 1979 has a grey dispenser base (some have red ones) and sold in 2019 for $3,500 on eBay.

The Disney softhead PEZ dispensers are thought to have been prototyped by the same company who made DC superhero softheads in the 70s out of Hong Kong. 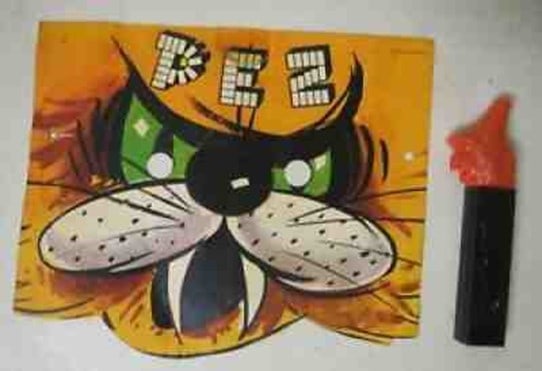 The Witch B PEZ dispenser is a truly rare find. The plain orange witch head on top of the black dispenser body may seem simple, but that’s because this is one of the oldest valuable PEZ dispensers you can find, dating back to 1957.

Originally, this PEZ dispenser came with a Halloween mask of an angry saber tooth tiger. An example of this dispenser that came with the mask sold on eBay in May 2021 for $4,500.

Fewer than 25 of these Witch B PEZ dispensers are estimated to exist. Even of the ones that do, most are missing the dispenser’s kicker that loads the candy due to a manufacturing flaw in this particular PEZ. This is another reason why this functional example sold for so much.

The whole concept of PEZ relies on marketing famous characters to sell the candy. While not the most famous Looney Tune in the bunch, Foghorn Leghorn hit that sweet spot of a lack of production numbers and desirability that make PEZ valuable.

This one was made in 1980 in Austria, with a three-piece head that includes Foghorn’s red throat and crest, white eyes, yellow beak, and orange head. A Foghorn Leghorn PEZ dispenser in excellent condition sold on eBay in 2021 for $7,001.00, making it one of the most valuable PEZ dispensers ever.

Foghorn Leghorn was created by Robert McKimson for the Merri Melodies short “Walky Talky Hawky” all the way back in 1946. Like many of the Looney Tunes characters, he was played by Mel Blanc until his death in 1989. Since then, many actors have played him, including Billy West, Bill Farmer, and Eric Bauza.

The most expensive PEZ dispenser is the Political Donkey. There are only two of these rare PEZ known to exist, with one being uncovered in a home in 2012. According to the homeowner, it was gifted to him in the 60s by the vice president of PEZ.

Evidently, the donkey PEZ dispenser was created as a gift for President John F. Kennedy, presented to him in Vienna, Austria in 1961 along with two other rare dispensers, a golden one intended for his wife, Jackie, and a Bozo the Clown one for Caroline.

After the trip, however, the Secret Service ordered the return of the PEZ dispensers to the company, possibly for safety reasons. At that point, the PEZ management team gave one away as a gift to a key staff member and kept the other two in storage.

The political donkey dispenser sold for $13,000 at a rare items auction.

There was a second political donkey PEZ dispenser that was discovered in storage at the PEZ offices in Austria. It was never sold and remains on display in their European corporate office.