Coke bottles are made to be used and thrown away. Yet, the shapely contours, the logo, the particular design, are as iconic as the drink itself. Coca-Cola has known for over a century that the bottle can make or break the product. From the beginning, the advertisements in teen magazines and storefronts emphasized the unique curves of that shiny, instantly recognizable bottle.

While 99% of Coke bottles are mass produced, generic, and common, a fraction of them have become collector’s items. Many factors influence the value of these bottles, including the shape, size, print, and other variations. Bottles with troubled histories such as those recalled early or which never made it out of the design phase can be incredibly valuable if they remain intact. Here are the 8 rarest Coke bottles that collectors can buy.

This near-mint Coke bottle from 1992 was sold in 2020 for over $1,500. On its own, an unopened Coke bottle from the 90s isn’t too valuable. However, this particular bottle was part of a commemorative series in China to celebrate the opening of the first McDonald’s restaurant over there.

It was purchased from a Coke executive who had it in storage and placed on eBay in 2020.

The bottling plant that produced this bottle, with the old-style embossed logo in the glass, could have done so during much of the early 1900s. However, since the sides are curved rather than straight, it must be post-1915.

To find these antique, unlabeled bottles unopened is a real find. This one sold on eBay in 2019 for $2,375, made from the bottling plant in Jellico, Tennessee.

The Coca-Cola Bottling Company was acquired by Asa Candler after its creator, Dr. John Pembroke, died. In 1899, he signed an agreement with attorneys Thomas and Whitehead to begin distributing the drink across the United States. One of their first ventures was a charter in Tennessee in November of 1899, which eventually produced this bottle. 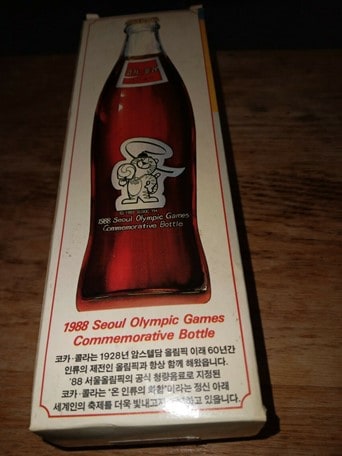 The 1988 Summer Olympics were held in Seoul, South Korea. Maybe you’re an Olympic afficionado and you know that Soviet Vladimir Artemov won 4 gold medals in gymnastics at these events. Or maybe you know that women’s sailing was its own event for the first time in history. Maybe you just learned that by reading this paragraph.

Regardless, we’re here to talk about the Coke sponsorship at the games, which included a commemorative Coke bottle sold in a tall cardboard box. It had Olympic art on all the reverse sides. Certainly, most of these bottles were bought, open, and drunk.

However, one appeared on eBay a little while ago that had never been opened! It sold at auction for $2,500.

The 1988 Summer Olympics were the last Olympic games of the Cold War since neither the Soviet Union nor East Germany existed by the next games. Despite this, they were not as ideologically competitive as the 1980 games. There was less boycotting and ideological squabbling in general.

Coca-Cola used ACL or applied color label bottles as far back as 1941. This was used instead of paper labels or custom-molded bottles, which had the labels built directly into the glass. The reason ACL became popular was that washing and shipping the soda bottles made the paper labels peel, which cost a lot to bottlers who had to reapply them.

Bottlers jumped on the chance to use ACL to avoid this process. They were limited to 2 colors but the process made production easier. A bottle with intact ACL like this one from Thailand, 1973, can sell for over $3,000.

The ACL process received its first major advancement in the 50s when the “lehr” was invented. It was an oven that could reach 1,200 degrees, enough to fuse the paint of the ACL label to the glass of the bottle. This process was called “annealing.” 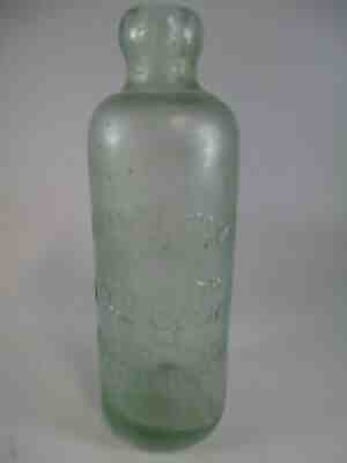 The Hutchinson Bottles were the first bottles commissioned by the Coca-Cola company after it left the hands of its original owner, Dr. John Pemberton, who died in 1888. Pemberton sold the Coke syrup to local soda shops to mix with carbonated water and serve as a fountain drink. His successor, Asa Candler, had bigger plans.

By 1895, he had Coca-Cola being sold in every U.S. state. By 1899, in Chattanooga Tennessee, they started using Hutchinson bottles to pack and ship the delicious drink. These bottles had straight sides, a logo embossed in the center of the bottle, and a metal stopper.

These bottles were only used for 7 years. By 1906, Coca-Cola switched to a much more familiar-looking model, which was amber-colored with a triangular logo in the center. Nabbing the original Hutchinson bottles, now in extremely short supply, can run you up as much as $4,000.

To pull out the metal stoppers from the Hutchinson Coke bottles required a special device that looked like a heavy-duty bottle opener crossed with a dental instrument. When the metal stoppers came out, they made a loud “popping” sound. This is where the term “soda pop” comes from! 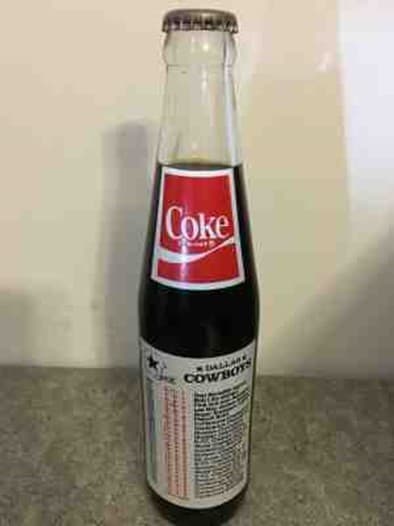 To celebrate the Dallas Cowboys’ 25th Anniversary in the NFL, Coca-Cola released these limited-edition Coke bottles. On the label, it listed the team’s yearly game record as well as their greatest achievement from that year, from 1960 to 1983. These achievements include being Division Champions in 1969, 1970, 1973, 1976, 1979, and 1981.

This Dallas Cowboys Commemorative Coke Bottle sold at auction in 2019 for $5,000. It was unopened and in great condition.

This Coke bottle was released in 1984, which was the Dallas Cowboy’s 25th season. This year is known not only for a 9-7 season, where they missed the postseason for the first time in over ten years, but also for the team’s ownership change. Cline Murchison lost so much money due to sagging oil prices that he had to sell the Cowboys in May of ’84 to H.R. “Bum” Bright. 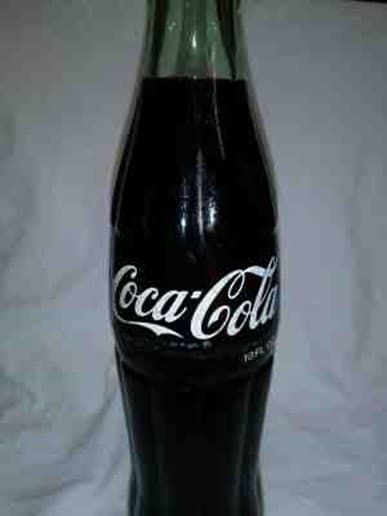 Sometimes, collectibles become valuable not because of what they are but because of the condition they’re in. What makes this 1974 Coca-Cola bottle special, aside from having the coke still in it, is that it claims to have a syringe inside.

To be honest, we’re not sure what they mean by this. We know that in 1993, Pepsi was embroiled in a scandal that involved syringes being packed inside soda cans, the evidence for which was very shaky and eventually dismissed as a hoax. What syringe is inside this coke bottle, we have no idea.

However, whatever the one-of-a-kind reason for this bottle’s unique origins, in its unopened state it fetched $29,900 on eBay in 2020. So it was worth that much to someone!

The 70s were a time of huge milestones for Coca-Cola. Not only did they open their first bottling operations in Poland and return to production in China for the first time in three decades, but they also debuted one of their most famous ad campaigns in 1971. The “I’d Like to Buy the World a Coke” commercial remains one of the most popular product ads of all time.

The rarest Coke Bottle is this Root Glass Co. Modified Prototype Bottle. In 1915, Coco-Cola’s parent bottling company in Atlanta proposed designs for a standardized glass Coca-Cola bottle. Submissions were required to include a prototype. There were 8 in total, and these now make up a sort of octagonal holy grail of Coca-Cola bottle collections.

Many test bottles have been discovered in Birmingham and other bottling companies in dumps and landfills, but none even close to complete or undamaged bottles. The bottle listed here is believed to be one of only two remaining test bottles from the Atlanta facility. It sold at auction in 2011 for $240,000.

Coca-Cola bottle collectors have learned the specifics of bottle design down to the minutest detail to assess their finds. In the case of these prototypes, the straight neck is recognized as being the earlier model, before it was changed into a curved contour, as seen in the advertising of the period.

At the same auction, the original sketch of this bottle’s design, recovered by the same former Coca-Cola employee, also sold for over $228,000. The artist’s name was Earl Dean.

Coke bottles may not seem like a hot-ticket collector’s item. However, to preserve a rare piece of corporate history, commemorate a famous event, or just enjoy a really, REALLY old bottle of Coke, some of these bottles sell for thousands, or even hundreds of thousands of dollars. Who knew?