From the ancient Egyptians and Greeks who played with marbles made from clay and polished nuts to modern marbles made from glass, plastic, wood, or clay, marbles have always been an amusing toy to collect. Marbles gave children a chance to play outside for hours and develop skills of precision or bargaining regarding the trading of different marbles.

The materials, colors, designs, and sizes vary, but the principal difference between marbles is whether they were a product of manufacture or handmade, making them more valuable.

Handmade antique marbles are some of the rarest types to find, with many factors participating in deducting the great value – from the pontil marks left on the opposite sides from making a sphere to more vibrant and attractive colors and designs of small figurines inside the core. Here is the list of the rarest marbles that you would be lucky to find in your collection. 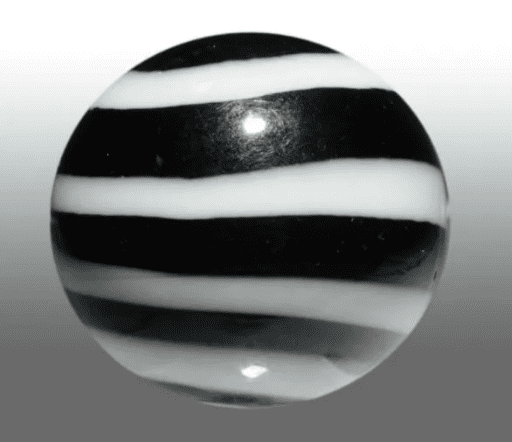 Navarre types of marbles date back to the late 1880s, when James Henry Leighton, a US marble maker, made the round melted pontil process of making marbles. They get their name from the place of origin, Navarre, Ohio.

The rare black and white Navarre marble has horizontal swirling with tight twists that end in deep brown color on its pontil end. This unique marble sold for $1,400 in 2009 in an auction. However, not much information is available.

Navarre marbles have the patented round melted-style pontil, first made by Silas Genier around 1850-1860 in Thuringen, Germany. 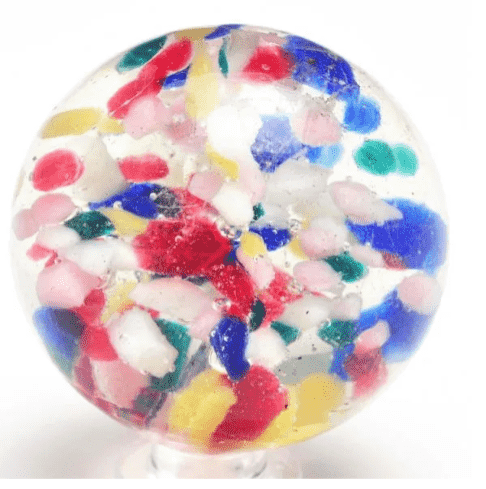 One rare Confetti marble with four lobes was sold in the auction by Morphy Auction House in 2011 for $5,015. The confetti colored pink, white, green, yellow, pink, and red moves from the center to the outside edge of the marble in four lobes.

These marble types are often associated with our brain system, as each of the brain hemispheres divides into four lobes: frontal, parietal, temporal, and occipital. 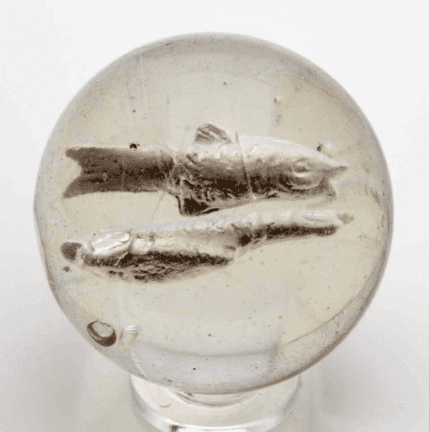 The most prominent Sulphide Marbles are those with animals inside (varying from birds and barnyards to household animals), but some contain humans and mythical figures. So-called Sulphides are handmade with a transparent base and a single pontil end.

One of the most valuable is that with two figures of fish inside, sold by a renewed marble collector Paul Baumann for $5,900 in 2011. This almost intact marble has a great surface, with no air bubbles inside, making it one-of-a-kind.

Paul Bauman is also an author who started his marble collection in 1952, following the steps of his parents. 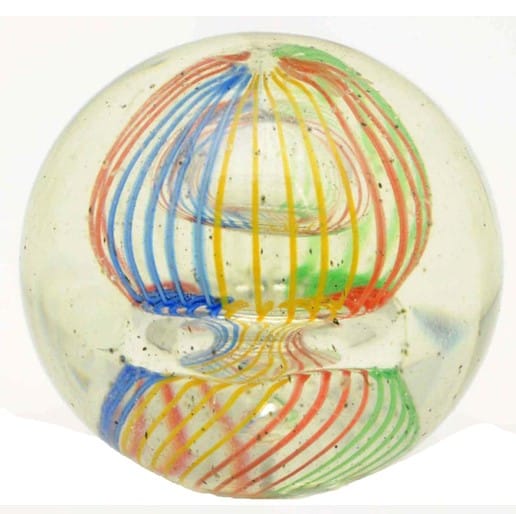 Usually, Chinese marbles were made with dense clay, weighing much more than the rest of handmade marbles. But this one is different. This Pontil Birdcage was handmade with glass and five different colors that swirl from the same pontil end of the marble.

It is no surprise that the Chinese 5-color Pontil Birdcage was sold in the auction from the Morphy Auction House for $7,670 in 2012, in nearly perfect condition. This marble has one controlled bubble inside the birdcage shape, hence the name.

One of the most expensive marbles is those with Lutz metallic flakes around the skin, named after its creator Nicholas Lutz in 1800. 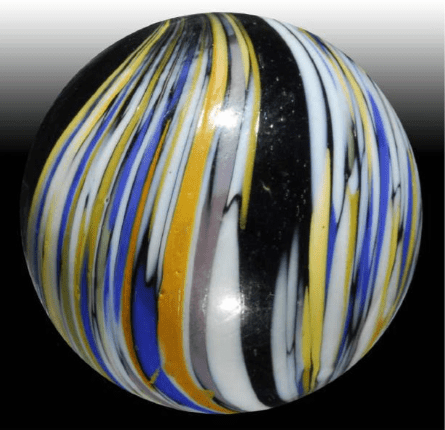 Indian marbles are opaque marbles with black bases and colorful swirls on the marble’s surface. Opaque black marbles usually have two bands on their surface, but multi-band examples are considered a premium.

Some have translucent dark red or dark amethyst base glass and are much rarer than the rest, called Mag-Lites. However, blue, amber, and green translucent are even rarer. One sold for $9,200 in Morphy’s $2.6 million auctions in 2008.

This Indian Mag-Lite marble is one of the more expensive marbles sold in this collection, wearing bands in yellow, white, purple, blue, green, and orange colors. 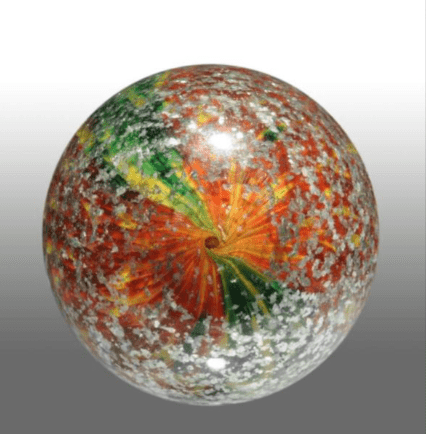 Onionskin marbles are German handmade marbles made with a crystal-clear core and opaque yellow or white color skin around. Because of its structure, if you look at this marble from its pontil end, you can spot a light coming through due to its translucent core.

One of the rarest onionskins is Blizzard, with two burgundy and emerald green panels and multiple sparkly-white dots of suspended mica floating right above its center. Blizzard sold for $9. 775 in the auction from the Morphy Auction House in 2009.

There are two types of Onionskins – Paneled onionskins similar to the one above. One type has a pattern of colors opposite each other, while the other has simpler colors like white or yellow for the base. 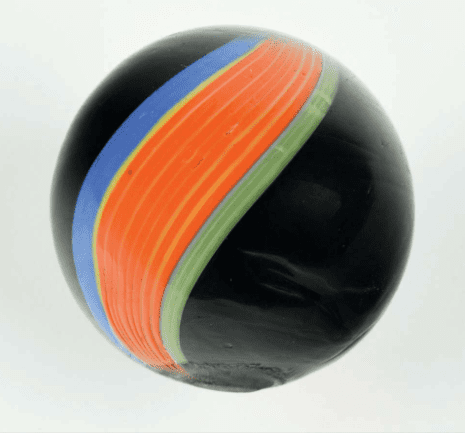 Indian swirl marbles are German handmade marbles from the 1880s, made from black opaque color, with multiple swirls in different colors. Precision Banded Indians are less common because they have various bands around the surface, all following the same direction.

One of these precision banded marbles was found in a pristine condition and sold just last year for $9,900 in the auction from the Morphy Auction House. This marble has a dark base with large blue, yellow, orange, and green bands visible from its pontil end.

Indian marbles entirely covered by color are “360 Indians”, as the colors go all around the sphere or full 360° degrees. 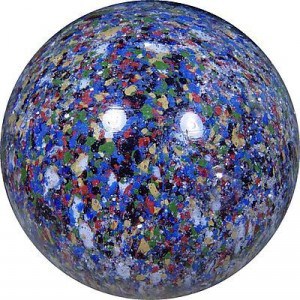 Confetti mica marbles are more common than the others on the list, this being a rare example of a rare handmade mica marble. Experts first thought it looked like any other painted confetti marble until they discovered sprayed mica specks instead after a closer inspection.

Supposedly, this marble originates from the 1860s and has an outstanding condition for its age, denominating the price of $10,999. It was sold on eBay by a notable marble collector Alan Basinet.

The British and World Marbles Championship started in 1932, set in West Sussex, England. Over 20 teams worldwide gather to compete for a silver trophy in a simple match of playing marbles. 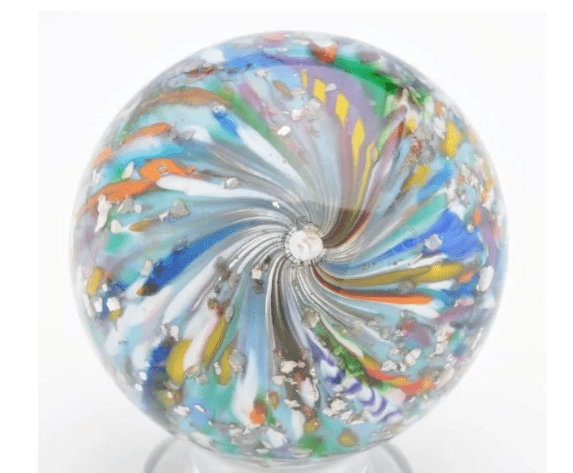 Onion Lutz marbles are some of the rarest marbles because of their metallic copper flakes called Lutz. Onionskins Lutz is also called “End of day” because of the unique way the colors swirl inside of the core. Most of the End of Day onionskins have transparent base glass.

Those with the combination of mica and Lutz are extremely rare, such as Peacock Lutz sold in a Live Auctioneers auction for $11,000 in 2011. Twirl of different colors inspired its name, with an estimate that the marble was made in the 1920s by a masterful marble maker.

The most common sizes for onionskins are 9/16” and 7/8”, while those over 1” are guaranteed a premium. 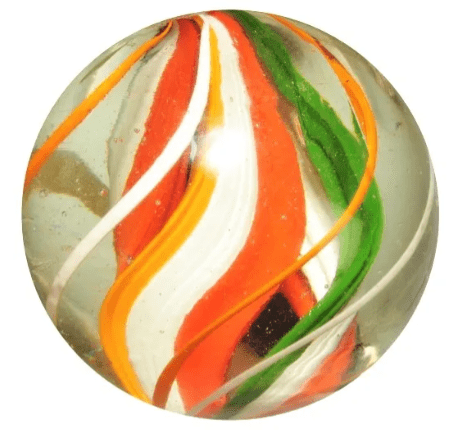 Divided Swirl marbles are also German handmade, being one of the most common, with three or more ribbons on the inside going around the core of the marble without touching the sides. Even with this, some are exceptionally handmade, resulting in high prices.

One of those, Large Divided Core, was one of the rarest marbles sold in the auction by Morphy Auction House in 2011 for $25,500. This marble has a different-colored aventurine core with outer ribbons in white and orange, one of the few large vintage marbles in circulation today.

German handmade marbles were among the earliest marbles imported to the United States. Made from the 1850s to the early 1900s, they’re among the most valuable and sought-after marbles for collectors. 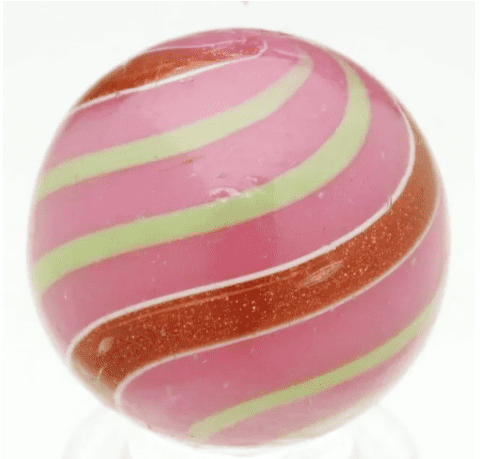 Another marble with Lutz gold-like specks on its skin with a rare combination of opaque pink base and green lines. Opaque banded lutzes are the rarest marbles to be collected today. They are also fragile, with lightweight and brittle glass to handle.

This glass-handmade marble from Germany was in mint condition when first found, resulting in a price of $25,800 in the auction from the Morphy Auction House in 2012.

Due to their brittle formation, opaque lutzes were not in high demand for production, as children usually didn’t play much with them.

9 Most Expensive Nikes Shoes Ever