Pokémon was a video game before the iconic trading cards were released. The game was created by Satoshi Tajiri, a Japanese coder and video game creator who developed Pokémon for Nintendo.

Pokémon wasn’t a huge success at first, but the game caught on and found a huge fanbase. Soon after, the franchise moved beyond the digital world with the release of Pokémon trading cards. The cards were a success and the Pokémon franchise remains popular today. 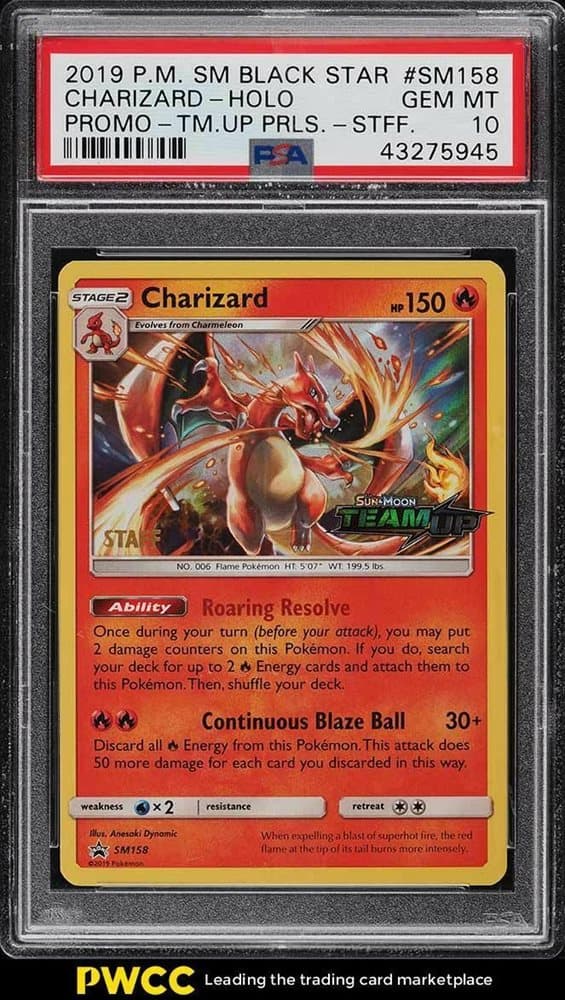 Pokémon cards stamped with STAFF are limited-edition promo cards that were given to businesses running League tournaments. The cards were already rare when they were made, but they became even rarer when it was announced that Pokémon would stop making these limited-edition cards.

Today, STAFF Charizard cards from 2019 are worth as much as $5,600! The rare card is especially pricey if it’s in good condition, but lower grades can still sell for thousands. Interestingly, the card can easily be found in mint condition while many other mint Charizards are exceptionally rare.

Charizard was introduced in Generation I of Pokémon. 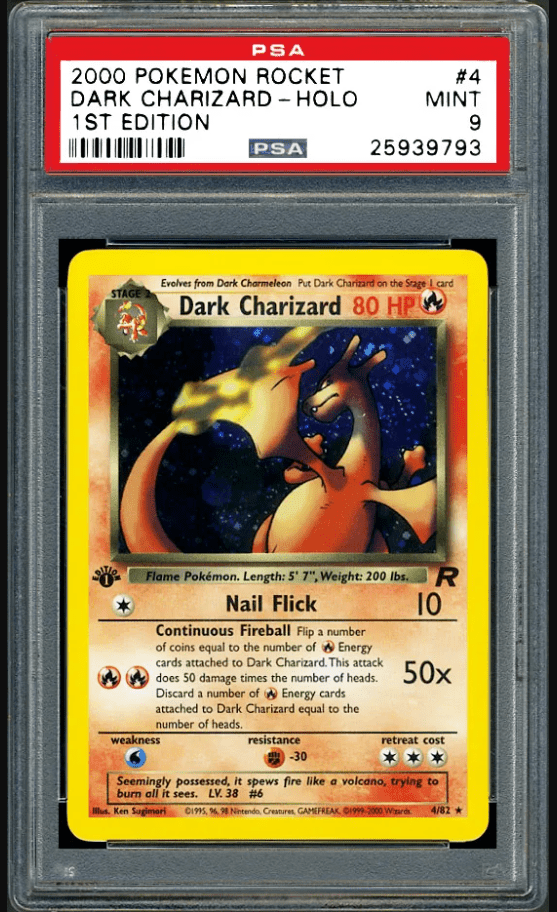 As a 1st edition card, this Dark Charizard is a rare and highly desirable collector’s item. Prices vary depending on the card’s condition, but the PSA card authentication company says examples in mint condition are worth about $6,500.

Of the 18 known Pokémon types, Charizard is a Fire type and a Flying type. Charizards weigh about 199 pounds and stand more than five feet tall.

Pokémon trading cards can be found in about 71 countries across the globe. Several billion cards have been sold while the Pokémon video game has sold well over 200 million copies. 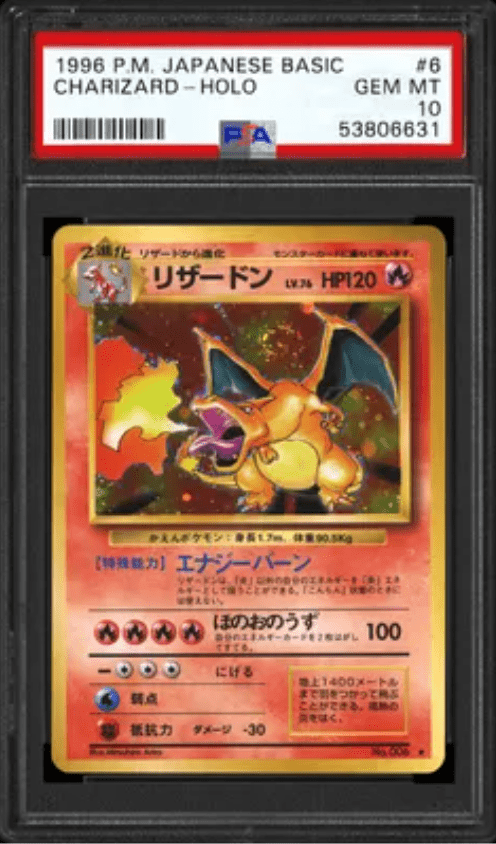 Coming in at number eight is the Charizard Japanese Basic Card. This card features Japanese writing and was printed in 1996. The card’s language and interesting design make it popular among American collectors, but a big part of its value probably comes from its age. The card was made right at the beginning of the Pokémon trading card phenomenon, making it a significant part of the game’s history.

Collectors can sometimes snag this card for around $6,000, but prices as high as $13,900 have been recorded!

Although Pokémon trading cards were introduced in 1996, the game didn’t hit U.S. markets until 1998 when the first demo pack came out. About a year later, the first official U.S. set came out. The game was preceded by the Pokémon TV show which debuted in 1997.

Some Charizards are classified as Gigantamax. This variation is bigger and stronger than standard Charizards. 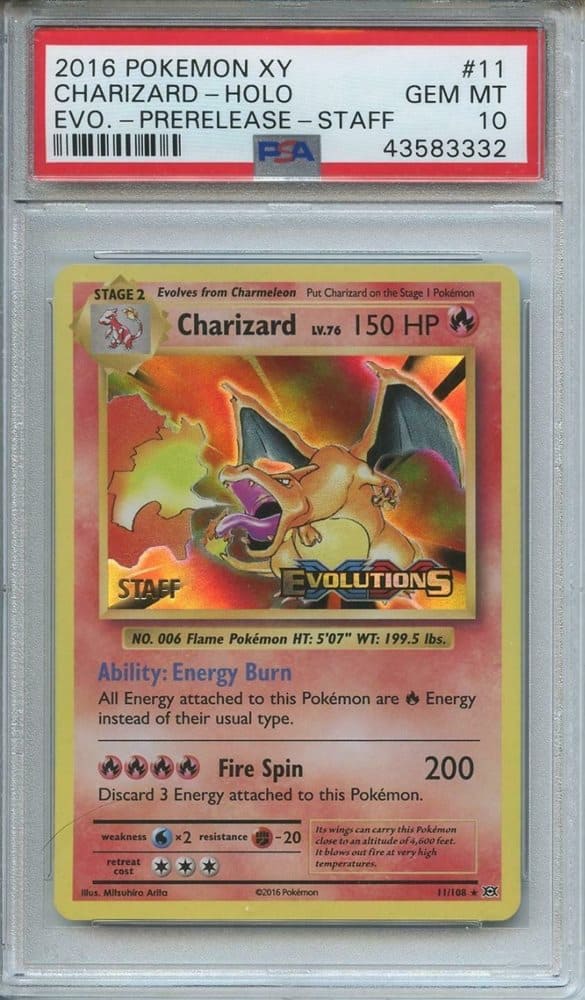 Up next is another rare STAFF card. This time it’s the STAFF Charizard-Holo #11 from 2016. The card features the important STAFF marking and was one of the few STAFF editions printed before they were discontinued around December 2020.

Valued at up to $17,000, the rare STAFF Charizard-Holo #11 is the seventh-most expensive Charizard card in the world.

After its debut in 1996 and subsequent release in the U.S., Pokémon became one of the most popular and best-selling video games on the planet. The success of the game was only surpassed by one other title: Super Mario Bros, also made by Nintendo. 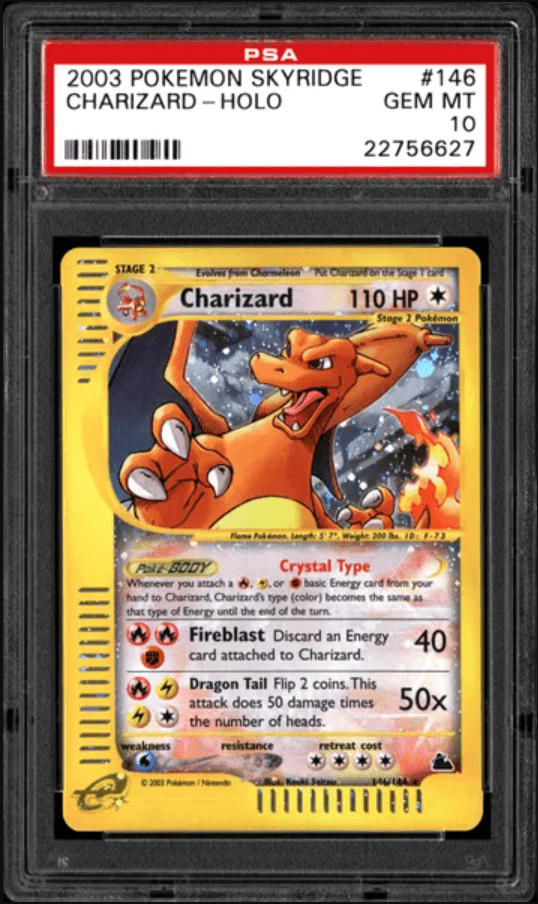 Coming in at number six is the rare Skyridge Charizard. Skyridge was the 15th expansion pack of the Pokémon trading card game. Within that set, this Charizard card was one of just 38 cards under the Rare Holo category — instantly making it a pricey collector’s item. Today, the card is valued at $18,000, making it one of the most expensive Charizard cards in the whole world!

Beyond this card, the Skyridge set included 182 normal cards. The 15th expansion was released on May 12, 2003 by Wizards of the Coast. Wizards published Pokémon trading cards from 1999 to 2003. This was the final set published by the company.

Wizards of the Coast is owned by Hasbro.

Value: $25,100
Reason for Value: Part of an early Pokémon set
Card Year: 2002
Interesting Fact: This was the game’s 11th expansion 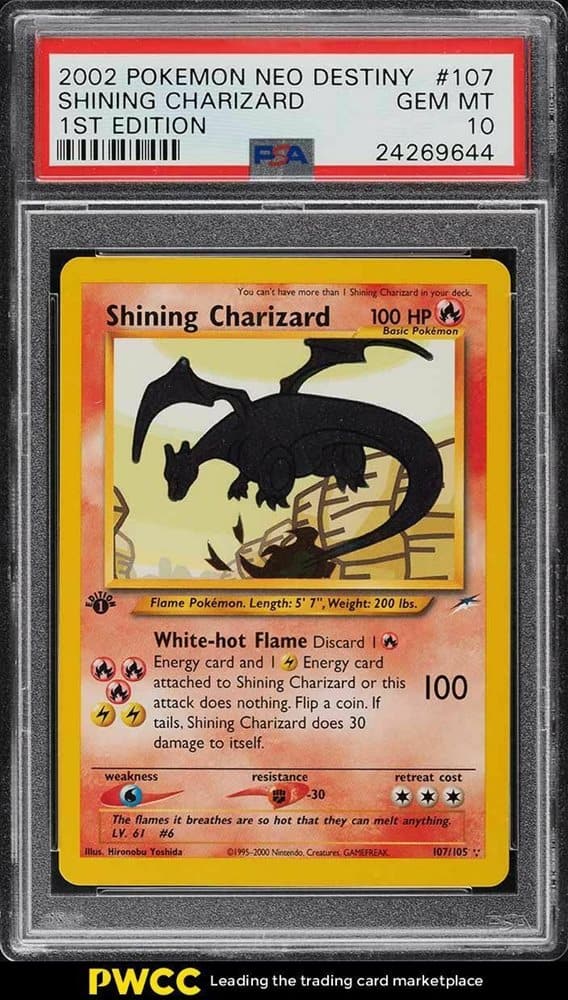 In February 2002, Wizards of the Coast released Pokémon’s 11th expansion pack: Neo Destiny. Among the new cards was the rare Shining Charizard, a limited-print card under the Shining Holos category. Only eight cards were included in this category, making the Shining Charizard very rare and very expensive. Today, the card is valued at more than $25,000!

Shining Charizard was the rarest card in Pokémon’s 11th expansion, but it wasn’t the only limited-print card. The set also included a limited collection of 11 Rares and 20 Uncommons. 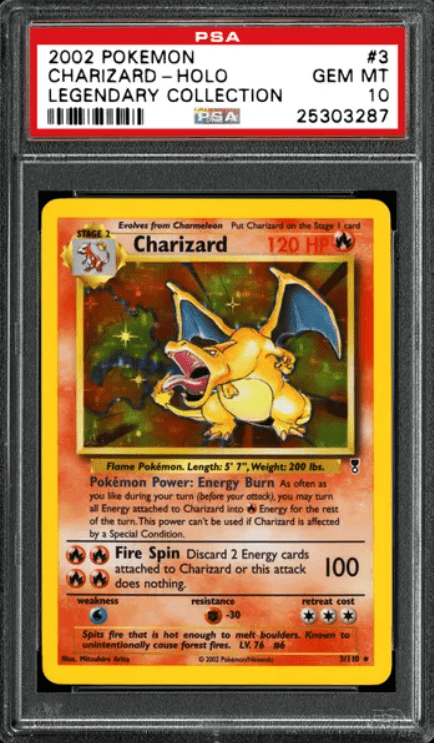 At number four we’ve got the rare Charizard-Holo from the Legendary Collection. This collection was released in 2002 only among English-speaking and European markets. The set was never offered in Japan, which isn’t a typical practice for the Pokémon trading card game.

Today, mint examples of this rare card sell for about $30,000. However, some examples in slightly worse condition sell for significantly less.

Pokémon was originally designed for the Nintendo Game Boy, but the game was exclusively available on the Nintendo DS starting in 2006. Pokémon availability has changed over the years as new devices are released by the Nintendo brand. 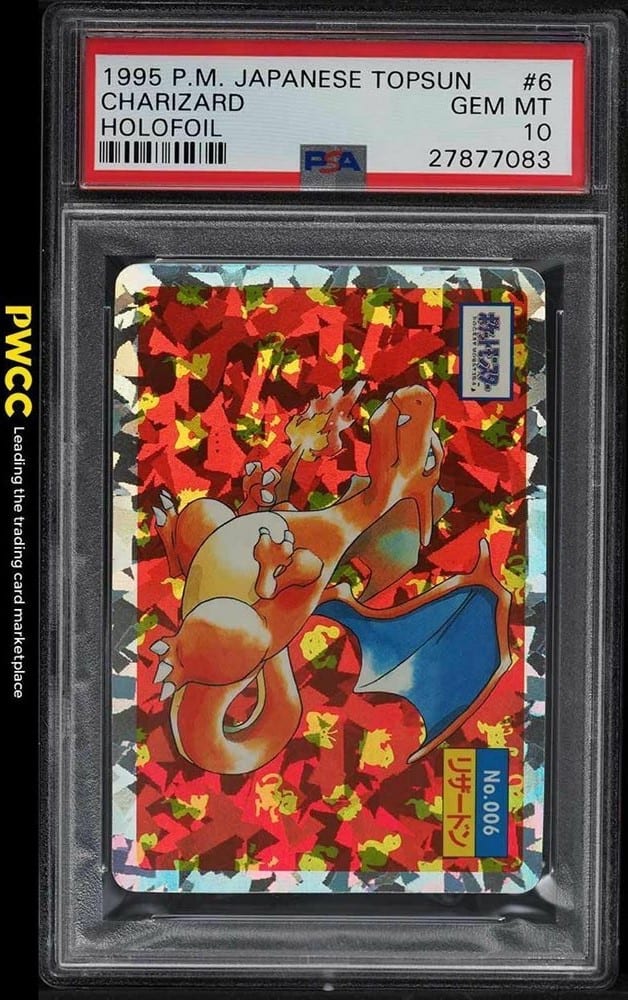 Heading into the top three we find the rare Japanese Topsun Charizard. This card was part of the 1997 Topsun pack, a card set released in Japan. The card is often misreported as being published in 1995, but the Topsun set actually came out in 1997. The 1995 myth is based on a copyright date found on the Charizard card.

Valued at more than $37,000, the Japanese Topsun Charizard is the third-most expensive Charizard card on the market.

Pokémon has remained very popular since its initial release, but the game found new levels of notoriety in 2016 when Pokémon Go was released. The app was such a big success that it reportedly crashed due to an extremely high number of downloads. 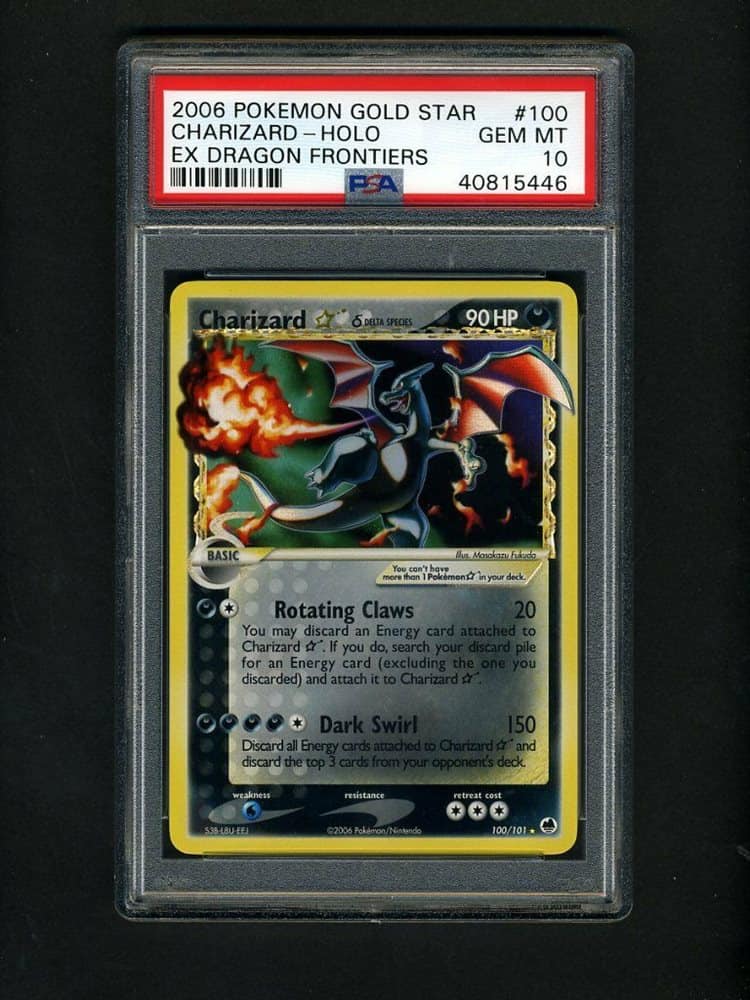 The rare Gold Star Pokémon card is an ultra-rare breed. These limited-edition cards were produced between 2004 and 2007, with just 27 making it to the market.

Gold Star cards are easily recognizable with their unique design: the cards feature a Gold Star next to the Pokémon’s name while the Pokémon itself stretches over the edge of the card’s border. In the case of the Gold Star Charizard, part of its right wing sits beyond the edge, as does its fiery breath.

Worth more than $60,000, this is one of the most expensive and rarest Charizard cards ever.

Collectors consider Gold Star Pokémon cards some of the “rarest and most interesting copies found within the hobby.”

Value: $420,000
Reason for Value: Part of the original U.S. set
Card Year: 1999
Interesting Fact: A rare example of this card was auctioned by PWCC Marketplace 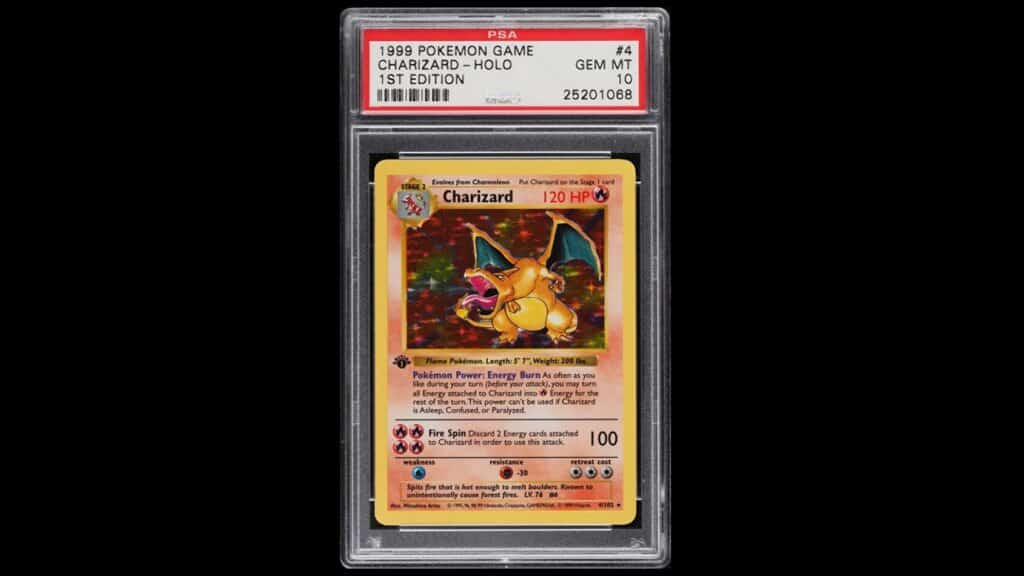 The 1999 1st Edition Charizard-Holo is the most expensive Charizard card in the world.

Valued at a whopping $420,000, this ultra-rare Charizard card is easily the most expensive in the world. The card is part of the first official American Pokémon set, which debuted in 1999. This original set was called the Pokémon Base Set and was followed by several expansion packs.

Stores were reportedly reluctant to sell the new Pokémon card game in the U.S., but the game quickly took off and earned Nintendo a ton of money while boosting the company’s stock value.